‘AMY’ Review: The Soul Behind the Voice of Amy Winehouse

Although not unlike what we’ve seen previously when talent mixes with drugs, Asif Kapadia’s tragic retelling of the nervy and vivacious Amy Winehouse in the new documentary “AMY” hits home in a different way. While the cumulative effects of substance abuse are what eventually led to her early demise, “AMY” seeks to paint an earlier portrait of the soul singer, sans beehive and winged liner, revealing a gawky and fresh faced teen straight out of North London’s Jewish quarter. In doing so, we meet Winehouse stripped of media saturation and public reputation, allowing us to focus on the raw and exhaustive talent as a standalone, which leaves some to regard her as one of the greatest lost voices of our generation.

In this deeply moving documentary, Kapadia’s power comes from finding intimacy in his piecing together a collection of stolen moments captured by the very people who helped both create and destroy the young and troubled Winehouse. Early footage introduces us to longtime manager and friend Nick Shymansky, the very same credited for persuading an unconfident young singer to take her lyrical craft and musical interest to the stage,  and thus turning Amy Winehouse into an early household name among jazz clubs throughout London.

These early jazz club performances highlight what we already know of her brassy and bodied voice, but Kapadia’s onscreen lyrics, which accompany the majority of the performances we see in the film, and rare behind-the-scenes footage of Amy in the recording studio highlight her lethal power of phrase, something that is so often disguised by her cool onstage demeanor. The film’s biographical storyline helps create parallels between her music and real life struggles, as we learn about her battle with family life and love.

It’s in one of these lyrical reflections that we learn about her longtime struggle with infidelity, something she credits to her struggle with depression from an early age. In “What Is It About Men,” she speaks directly to her father’s domestic absences and its spawning similar behaviors in her own relationships with men. Mitch Winehouse quickly becomes one of two male antagonists in Amy’s life, by both unashamedly cashing in on her fame and tabloid tendencies, and assisting her early avoidance of rehab when it was needed most.

Her big-time breakthrough success is result of her second toxic male relationship, this time with ex-husband Blake Fielder-Civil, who is to thank for her 2006 double-platinum album “Back to Black.” But the multiple Grammy-award-winning break-up album sounds less successful and more heart wrenching when we pay witness to an inside look at her personal life with Civil, and her deep and desperate desire to be loved by him. It’s in that desperation that Amy takes to the use of crack cocaine and heroin, a habit introduced to her by Civil at the time. 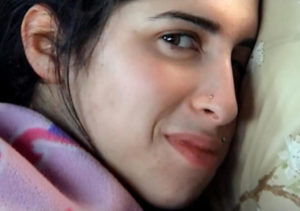 The continuous cycle of an absence of support but an abundance investors lays the perfect groundwork for tragic destruction, and one of the greatest successes music has seen. The lengthy transition from spellbinding new-comer to petite and powerful songbird is the truest of tragic jazz stories — “the more bruised and battered, all the better for a woman in the Blues.”

And while “AMY” houses various successes in its raw storytelling, perhaps Kapadia’s greatest success is in staying true to the pint-sized, raven haired Jewish girl with a booming voice – the very same one whom remains hidden in the shadows through all the turmoil and trouble and heartbreak that comes with celebrity…the very same whose one true dream is to perform alongside her lifelong idol and Jazz hero, Tony Bennet.

It’s in her hero that it would seem Amy found what may have been her last musical solace, as she sings alongside Bennet in the film’s closing scenes for a duet recorded only months before her death. In the last footage we see of Amy, tender and unguarded alongside her hero, Bennet’s closing words are profoundly felt in his insisting her voice and her memory be preserved among other music greats like Ella Fitzgerald and Billie Holiday — company I’m sure the unapologetic Jewish girl from North London would be happy to keep.