The Morning After: Beast + Bottle = Brunch at its Best 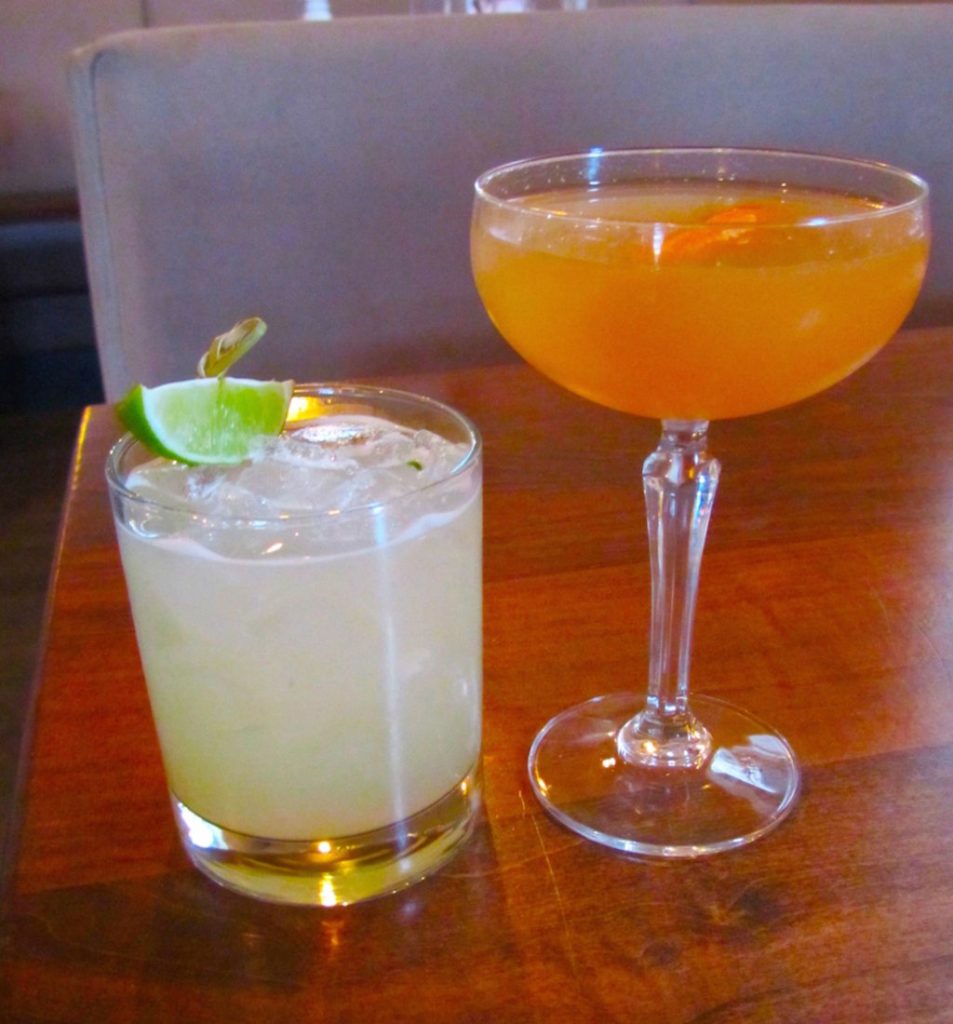 What: High-end farm fresh fare with an emphasis on organic eggs, quality pork and an extensive list of wines and original libations.

The current atmosphere at beast + bottle bespeaks the holiday spirit: cream white b-board decked out with softly glowing lights, tinsel and pine strewn about. As if on cue, light snow began to fall outside last Sunday afternoon. Within the warmth of the small restaurant—one of the few that can describe itself as ‘cozy’ and get away with it—one feels farther away from the Mile High than would seem possible on bustling 17th avenue.

Owing perhaps to its familial roots (brother and sister Paul and Aileen Reilly own and operate the restaurant) beast + bottle’s natural air of classed-up comfort blends well with its commitment to locally sourced products. The Reillys were at the Cherry Creek Farmer’s Market around the time they were preparing to open beast + bottle when they met the owners of Cottonwood Creek Farms in Merino. After accepting an invitation to visit the farm in person, they arranged to keep their own flock of Rhode Island Red hens on-site, which now supplies the restaurant with bounties of fresh eggs. Paul Reilly, who is the executive chef, also specializes in pork. All of the breakfast options thus feature some variation of one or both of these ingredients, with a few exceptions.

According to the staff, the two most frequently ordered dishes are the Pork Shoulder Tostada and Chicken-hatch Chile Sausage ($14 each). The latter, a succulent link served on top of cornbread with honey-lime hollandaise and eggs, is hard to resist. The Pigs in a Blanket ($13), which immediately caught my eye, meanwhile bring to light braised trotter with a red wine demi-glace and walnut wrapped up in buttery crepes. The pork is choice, well cooked, although, to the sweet-toothed, perhaps overgenerous with salt. The entree comes with a citronette dressed salad featuring local lettuces from Oxford Farms in Boulder.

“[Beast + Bottle] is an equation that needs only the addition of appetite to achieve a winning balance.” 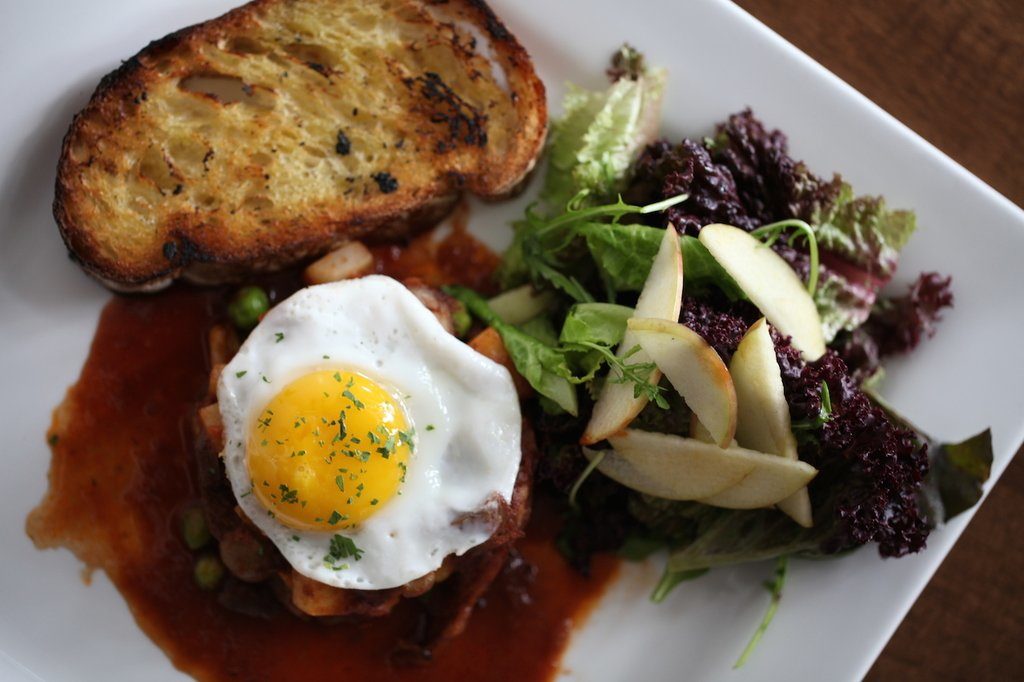 As is usually the case, the dish that disturbs the brunch barrier and nods to both sides of the clock is the one a diner does not easily forget. In this case, that dish is the Pizza Carbonara ($11), which beast + bottle employee, Hannah Huston, was quick to recommend, calling it “undervalued.” It is a crispy flatbread topped with guanciale (cured pork jowl), black pepper, chives and a sunny egg. Not quite as salt-heavy as its breakfast counterparts, the cheeks still have that particular mouthfeel and elevate the otherwise unassuming bread and sauce fixture for a pleasing finish. 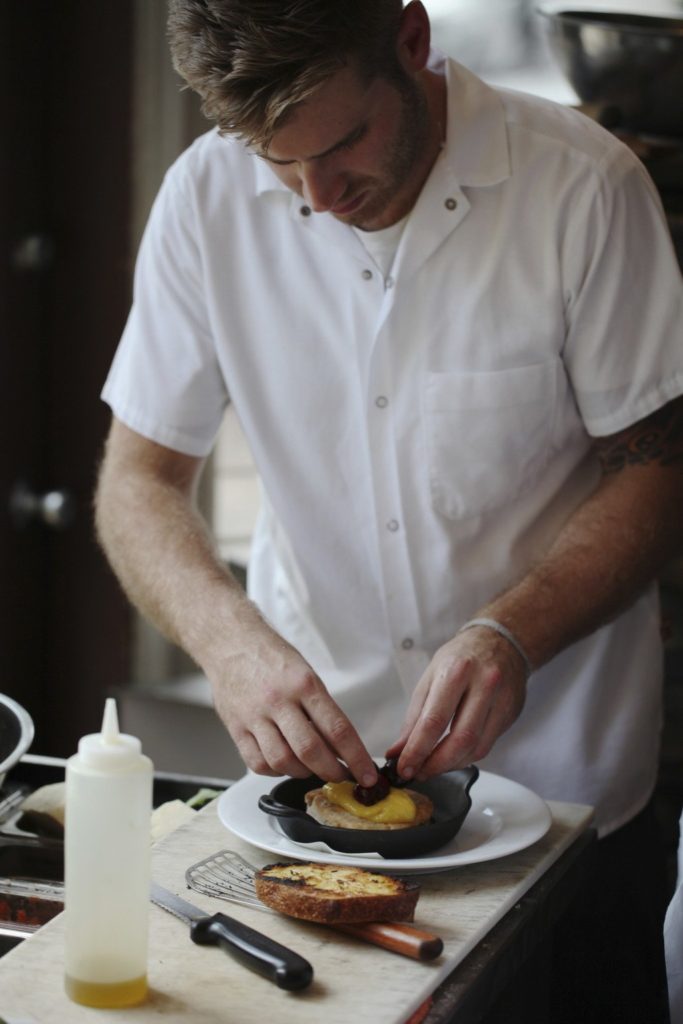 Full disclosure: as far as I’m concerned, the saltiness is all well and good, because beast + bottle does not skimp on its swigs. The Oaxacan on Sunshine ($10) is a bitter mixture of mezcal, Leopold’s orange, agave syrup, a lime twist and grapefruit, the last of which imparts its unmistakable citrus notes, color and imbues the drink a name worthy of its individuality. The Lime After Thyme ($9), a simple combination of vodka, thyme syrup and lime is summer appropriate, but works in all weather. The restaurant also has its own signature suds: the Bier de Beast, which for now is a slightly darker, spicier iteration of the farmhouse ale saison that is always on tap, courtesy of City Star Brewing in Berthoud.

Given beast + bottle’s exceptional recipes and exclusive ingredients, the restaurant is an equation that needs only the addition of appetite to achieve a winning balance.