New York Fashion Week moved at a quick pace, so we don’t blame you for missing out on a few shows here and there. All last week, designers showcased their best Spring/Summer 2015 collections. Elaborate sets called for dramatic shows and all the best models worked their strut on the runway.

303 Magazine wants to keep you ahead of the curve with your spring/summer style, so here are our 5 favorite shows from New York Fashion Week. 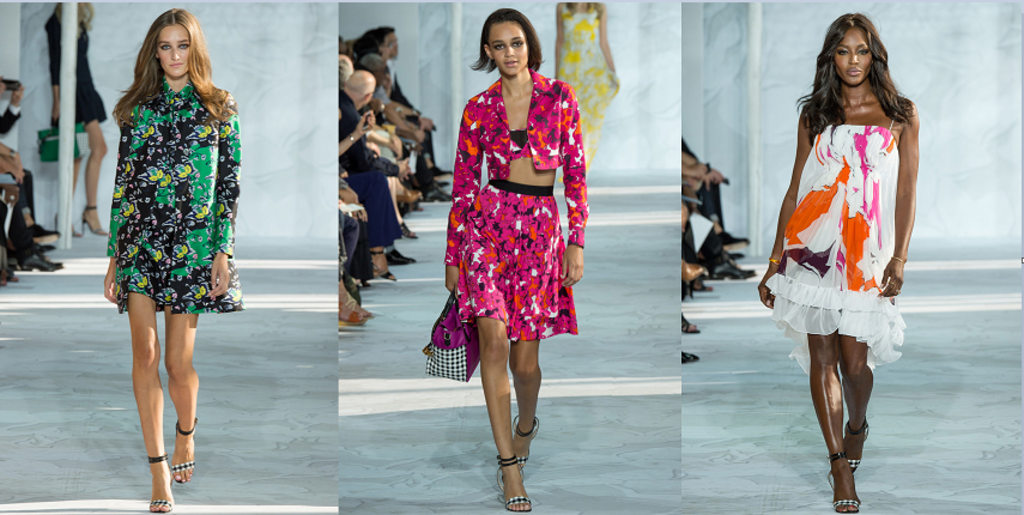 DVF has been a long time resident of New York and an even longer fashion designer. Her career expands to every corner of the globe and her signature wrap dress is a hit with the ladies. This made for a shocking surprise when everyone realized there were more bra tops on the runway than usual for a DVF show. Oh yes, this collection was all about skin. Diane also opted to show a plethora of short skirts and dresses with only two pairs of trousers in the entire show. But everything was still classic Diane with sophisticated models, simple shoes, and clean (yet crazy) looks.

Construction and architecture was echoed at the 3.1 Phillip Lim show earlier this week. While there was a void of color overall, bright yellows and pinks added that much needed wow factor to black, white and navy garments. Preppy looks such as printed blazers and crisp cotton shirts were contrasted with cool moto jackets and cut out dresses. There were asymetrical zippers, chic bomber jackets, and city ready A-line dresses. The collection was diverse in content, something we’ve come to expect from 3.1 Phillip Lim.

Zac Posen is known for dramatic gowns we love seeing on the red carpet, but his latest collection took a different turn. While they were still present during the runway show tailored pieces really took the spotlight. The collection started out with an all white look complete with jacket and trousers. Work style knee length dresses and skirts soon followed. But don’t worry, the glamour of old Hollywood wasn’t lost. We still got to see bare shoulder gowns that are to die for.

NYFW can only be complete once Alexander Wang shows his latest collection. Street style cool is what hes known for and that exactly what came out of his Spring/Summer 2015 collection. Sneakers were shown on the runway alongside athletic-wear inspired bound dresses. We always expect something new and inventive from Wang and we guess a foam injected dress will do. Mini dresses with pleats were worn over turtle necks for a very downtown New York feel. Once NYFW is over we’re ready to see what Wang has prepared for us over at Balenciaga. 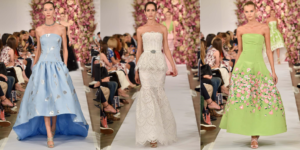 Known as one of New York’s most experienced designers, Oscar de la Renta should have it in the bag…and he certainly did for his most recent collection. Something was in the air as well as on the walls. A large slab full of pink and white flowers stood as home base for the runway letting us know we were in for quite a feminine collection. A beautiful floral perforated skirt opened the show alongside pastel pinks. Preppy checkered patterns were used in coats, skits, and tops. But the real show stopper (like usual) were the de la Renta gowns. These floor length-ed beauties were full with volume for a dramatic finish to the show.