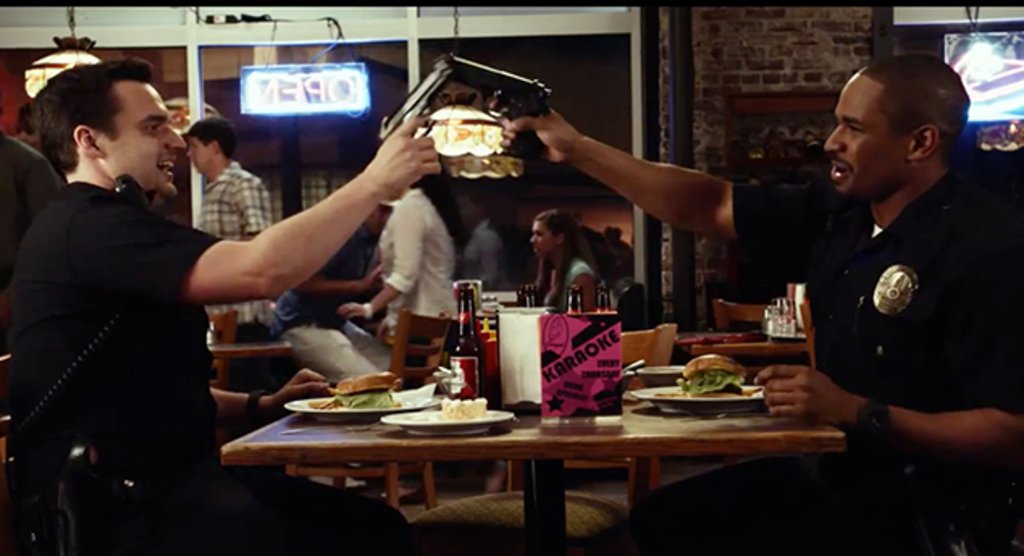 Let’s Be Cops – Funniest Movie of the Year

Let’s Be Cops is the funniest movie of the year. Perhaps it’s the best comedy I’ve seen in many years. I know – I couldn’t believe it myself. It was the most surprising and absolutely riotous new films of 2014, from one of the most unexpected places.

The disruptive script by Nicholas Thomas found the perfect duo and vehicle through Damon Wayans Jr. and Jake Johnson (of New Girl fame). Their chemistry is ridiculous. Beautiful duos are far and few between these days. The audience will fall in love with Johnson and Wayans Jr. They spent the entire filming just trying to make each other laugh. Even with a brilliant script in use, they had the freedom for improvisation, and to push the limits.

303 Magazine was lucky enough to see an advanced screening on CU Boulder’s campus with none other than the stars of the film themselves, Wayans Jr. and Jake Johnson. People asked in the screening, “Did you train as a police officer, following real life cops to see what you should do?” The answer was no. Johnson and Wayans Jr. did shadow real-life police officers, but just to watch, learn and do the exact opposite.

Nicholas Thomas and Jake Johnson at the Kitchen Sink in Boulder, Colorado.

This is how not to be a cop. Along with the clichés with easy laughs, like the two cops smoking pot, skipping red lights, and all the brilliant reinventions of the classic cop movie scenes, Let’s Be Cops has a seriously unconventional plot line. One that takes you places you did not anticipate. It is fast-paced and exciting, intelligent yet seriously inappropriate. To straddle the line in between perfect comedy and so gross you may have to look away, all while being fresh and unexpected, is brilliant.

The breakout role and possibly highlight of the film was Keegan Michael Key (of Key & Peele) as the lisp dawning Jamaican Pupa who the fake cops kidnapped from the hood. Pupa opens his eyes with a madman stare, dreds, neck tattoos and the funniest accent imaginable.

The real message relayed through the onslaught of inappropriate jokes was the main characters need for confidence in themselves. It was like dawning a superhero costume, a disguise that demands respect from a world that had none to give. The repercussions end up being very real as the villains played by Andy Garcia and James D’Arcy are as menacing as any cop buddy film: real life and terrifying.

Johnson echoes Kenny Powers in the amount of curse words he says to children. It’s hilarious and an easy hit. The actors told 303 Magazine their undeniable chemistry in the film was what sparked the conversation in which Johnson proposed for Wayans Jr. to come back on the show. The creators of the New Girl jumped at the idea.

Wayans Jr. plays a timid video game designer, a plot that seemed a bit kitschy or cheesy to start, but like the whole film, picked up pace in a tidal wave of hilarity and relevance. I am obsessed with Damon Wayans Jr., whom recently rejoined the New Girl cast last season after the (unwarranted) cancellation of ABC’s Happy Endings. Happy Endings was brilliant, witty and fast paced, something ahead of it’s time. Each character has now branched off onto other comedy shows on television including on Parenthood and The Middle. None are as well written as Coach’s return on New Girl, a show of comedy genius that is probably the only thing to help ease the loss of Happy Endings. Buy the seasons on DVD someday and you’ll understand why.

Nina Dobrev’s fresh face was Wayans Jr.’s love interest. Rob Riggle is a welcomed face in any comedy. Let’s Be Cops shows him in his best, as a cop, who completely falls for the front that Johnson has created. The absolute best scene in the film involves a hold-out in grocery store with Riggle and the two wannabe cops. They shot the funniest part (you have to see to believe) in one take and it involves a very large, naked man.

See this movie if you love New Girl, but more so, see this movie because it is the most brilliantly written comedy I have seen in years. Let’s Be Cops will sit next to SuperBad, Pineapple Express, and The Hangover as college-aged comedy gold.