Julianne and Derek Hough, along with their dance crew (consisting of many familiar So You Think You Can Dance faces) temporarily transformed Paramount Theatre from the historic landmark that it is into a futuristic dance fest that exceeded even the ultimate fans’ expectations. The Move Live on Tour came to Denver this past Tuesday, July 15th, and had even the not-so-dance-inclined up on their feet. 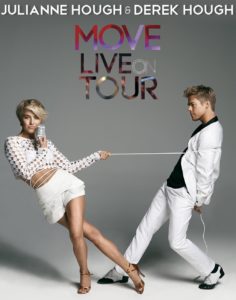 The siblings and Dancing with the Stars stars (25-year old Julianne, who’s won two trophies on the show and launched her acting and singing career since, and 29-year-old Derek, who’s a five-time show winner and now an Emmy-winning choreographer) set the stage for the 2-hour show with the very first number, combining through-the-roof energy, sexy costumes and superb talent from the moment they hit the stage. Dancing together, and pairing with members of their dance troupe, they covered many different styles, from the more modern Latin and ballroom styles (Len Goodman would insert a criticism here for the lack of “traditional” ballroom moves, but the audience applauded the contemporary twists) to hip hop and contemporary, among many others, capturing the crowd, who cheered them on every step of the way.

As if the Houghs weren’t talented enough on the dance floor, the two can belt out some notes and entertain the crowd along the way. The two performed “Say Something” by A Great Big World together, sounding fantastic, and had a couple of solos, including Julianne’s original “What Are You Waiting for?” After the full-out dance performances that would leave even the most fit dancer gasping for breath, the live singing wasn’t impacted whatsoever. The duo also humored the audience with their friendly sibling rivalry banter, performing their own version of “Anything You Can Do (I Can Do Better)” and making hilarious sexual references relating to their craft (Derek pointed out how much of an oxymoron ‘ballroom pants” are).

The production, choreographed by Tabitha and Napoleon D’umo (known better as Nappytabbs by the fellow SYTYCD audience), reaches its full potential, combining multiple dance styles, through-the-roof talent and energy, exuberance and true joy, written all over the performers’ faces as they dance the night away. Add sentimental commentary, audience interaction and shirtless Derek, and you have the makings for a top-notch performance, capturing all ages in all walks of life.