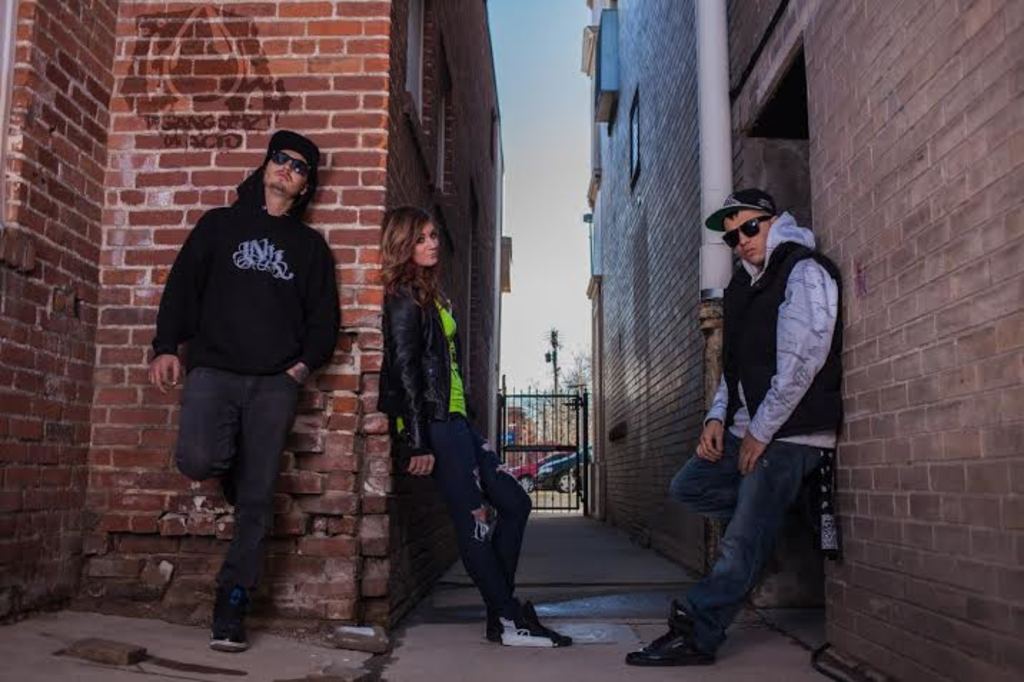 Yes, they go by Gangstaz on Acid. Yes, they party. They can turn any typical outing into one filled with mayhem, pretty girls and indelible rhymes designed to leave a mark. That mark may, or may not be related to their party rocking beats that incite you to climb onto a bar and shake what your mama gave you. Gangstaz on Acid consists of Jeremiah “Boom” Castillo, he goes by Boom Cee; Jesse j. Baiotto aka Jesse James, and producer/DJ extraordinaire William Parsons, aka Mr. Willis. The crew has fashioned a new sub-genre of hip-hop called “Electronic Gutter Music” that is also the name of their new album.

Chock full of break beats and a “thug-step” lifestyle, GOA is definitely the group for the partygoer in you. Though hip-hop came first for the outfit, don’t get it twisted, their party hard antics most definitely are progressive and noteworthy. Mr. Willis largely handles the production for GOA but Electronic Gutter Music boasts of production by ISHE, Vinnie Maniscalco, Treyy G, Mr. Audity, Dirty Little Thieves, Timeline and more.

We caught up wth GOA to talk the art of party rocking alongside their ever personable manager Mike Knopping (Party Guru Productions) and resident singer Em Possible. Check for GOA performing live at Cervantes Masterpiece Ballroom on May 29 for the release of Electronic Gutter Music.

303 Magazine: Why don’t we start off with some introductions.

Boom Cee: I’m the explosion, an MC from Denver, Colorado. Born and raised.

Mike Knopping: I run Party Guru Productions and I also manage these guys.

Em Possible: I am the singer for GOA and I bring a feminine touch to this crazy group of boys.

The group came together in 2009 but you all have been artists on your own for long before that. Talk about the formation of the group.

Boom: I’ve been a songwriter since the age of 16. I used to break dance and rap and all this other crazy talented stuff at the same time that Mr. Willis was killing it at making beats. I started freestyling and ever since then we just came together perfectly. We’d go to parties and I’d freestyle over the beats he’d make and the parties would just be crazy jumping.

What were you listening to back then?

Boom Cee: Gangsta rap. Back in the day, my cousin DJ Fame started a crew that was the first group to get a distribution deal here in Colorado. Every since that moment, we knew we could do it so we just clicked and started writing every day, singing, and practicing, just working on our craft. We started doing shows years after we started singing and songwriting. We wanted to be prepared for it.

Mr. Willis: I was sort of disenchanted with hip-hop and the scene out here and I was looking for something different. I don’t know if we all came up with the idea to blend the genres but hip-hop was always first. I started deejaying back in 1997 with vinyl and crates of records. I was really over the style of rap making the rounds so I started being more diverse with what I was looking for. My influence is a cross between that golden hip-hop 1997 east coast style with the really early west coast gangster rap. Geographically what happened to me is what influenced me. I was really jaded after working with some local artists who weren’t going anywhere.

What do you think about the party rocking movement? There’s LMFAO and others who have paved the way for that style, even though they don’t take it that seriously.

Boom: We take it very serious. [laughs]. There’s the hip-hop influence of course but we bring in the EDM influence to balance it out and make the sound mesh together well.

Knopping: They worked really hard on their first mixtape but the ultimate problem in the end is it was a mixtape. Working over someone else’s beats is different than creating original tracks that fit together perfectly.  We needed beats that would match the lyrics and tell the stories they were trying to tell. That’s also why we needed a vocalist.

Boom: The beats we made, we chopped them up and made them into original song form. There’s three verses, three hooks, and a singer. We structured the beats to form the way we needed them to be.

Em: Even though I’m the vocalist for the group, I try to go hard, if not harder than the boys. That’s fairly true. [laughs].

The entire project isn’t just about throwing parties and having crazy nights, though. The rhymes are surprisingly detailed considering the content.

Boom Cee: Yeah, we have songs on there about the struggles of our lives and how we overcome them.  “Dusty Roads” is a track about how we’re trying to make it in life and live our dreams. We write about what we live, what we see and what we do, which is party. We have those moments of real talk.

Mr. Willis: There’s not really a lot of love songs on the album but breakup songs. That’s something everyone can relate to, songs about people you’ve been in relationships with. We mulled around a lot of the Electronic Gutter Music sound and it’s not just one thing. There’s the EDM elements but we keep the hip-hop rhymes at the core. That makes the electro sound stand out even more. And also for the stage. It’s more serious for us because we’re not trying to take it as a joke.

Boom Cee: More people are wanting to party for sure but we’re doing it in a way people can relate to and over beats that are actually good. It’s a new culture, for lack of a better word. It’s not just the partying, we have reggae tracks that talk about the dab culture here in Denver so, you know, it’s relevant. We have a song called “Sub sex” where a bitch is sitting on a speaker and having an orgasm. We like to switch it up. The last song is called “Dance in the Stars” and it’s a throw to our day-one niggas. We give props and we show everyone love.

Watch the video for “Party My Ass Off” below: