Dessert for Dinner: Guard and Grace Brings the Sweet

What: Guard and Grace

Cons: You’re going to have to drop some cash to make it happen, but know that it’s well worth it. A happy hour menu is currently in the works.

Troy Guard’s newest addition to Denver’s vibrant dining scene, Guard and Grace (named after his daughter), is a serious stunner. Located at the base of one of Denver’s tallest skyscrapers in an area largely devoid of restaurants, it may be the most beautiful restaurant in Denver.

Guard, who also owns TAG, TAG Raw Bar, TAG Burger Bar, Sugarmill, and Los Chingones, has spared no detail in the design of Guard and Grace. Outside is one of the city’s largest ground-level patios. The space offers a respite from the urban landscape with umbrellas, fire pits, and greenery. Inside the sleek space, you’ll find a vibrantly green living wall, a temperature-controlled wine room (holding around 4,000 bottles) looking out to a comfortable lounge area. There’s an expansive bar backed by a charcuterie aging chamber, all anchored by the sparkling raw bar and oak fire roaring in the open kitchen. The dining room boasts tons of natural light, booths both high and low, community tables, and tucked in the back, a cavernous private dining space. 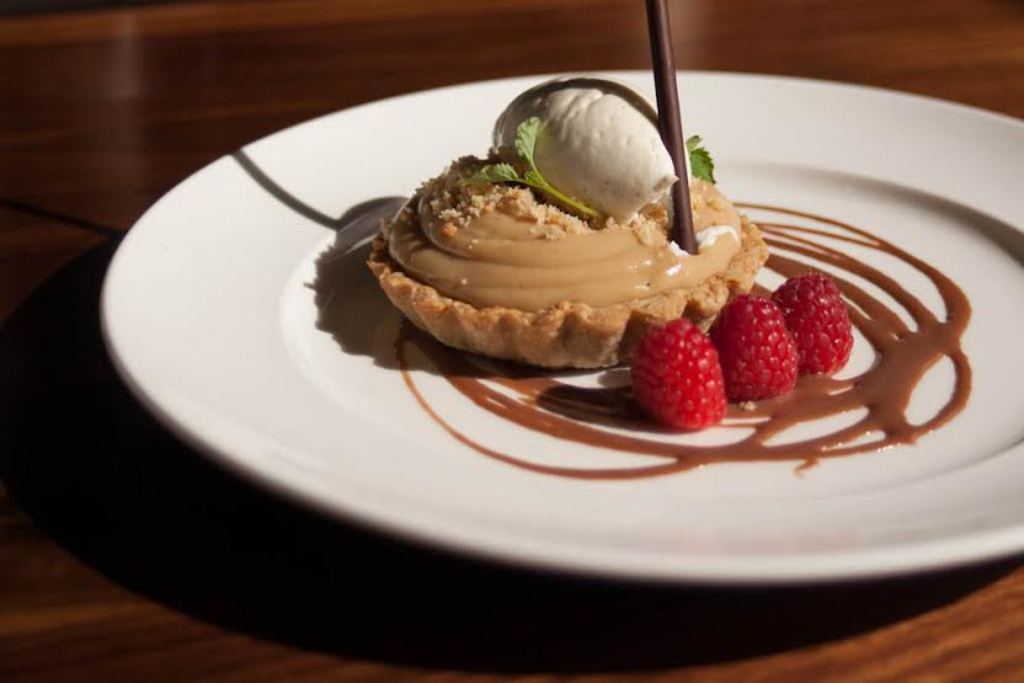 The butterscotch tart at Guard and Grace. Photography by Jacqueline Collins.

Though the restaurant is billed as a “steakhouse,” it’s redefining what that label means–not only with it’s sophisticated, earthy aesthetic but also with the menu, which features ingredients and preparations not typically  associated with steakhouse fare. You won’t find clichés like creamed spinach here.

This same ideology is reflected in the desserts, helmed by pastry chef Ryan Walker, who formerly worked with Guard at his flagship TAG.  The talented and humble Walker crafts desserts with a focus on light, playful flavors and impeccable technique. 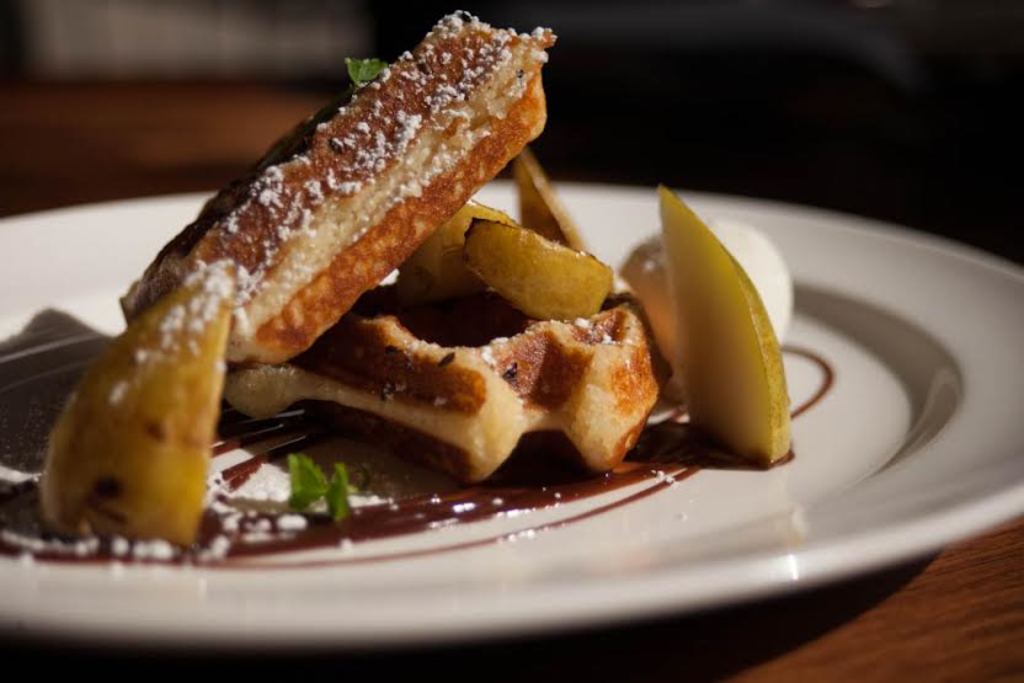 Take, for instance, the deceptively simple beet raspberry sorbet made by Boulder based Ice Cream Alchemy at the request of Guard. It was earthy and sweet at the same time, light and refreshing.  This would make the perfect end to a light lunch. The Daily Assortment of Confections offered up included flour-less cake bites, truffle pops, raspberry macarons, and lemon raspberry tart, all flawlessly executed  and perfect for sharing with the table.

The butterscotch tart was also a favorite. It was ethereal and delicate, with light butterscotch piped into a crisp steel cut oat crust and topped with Tahitian vanilla cream. The surprisingly healthy oat crust was Guard’s idea, Walker said. “He wanted to incorporate lighter ingredients that aren’t typically used in desserts.” This is seen again in the organic quinoa and flax seed waffle, which almost reads like a virtuous breakfast on the menu. The flax-studded, gluten-free waffle had a savory, almost fried-flavor, perfectly complemented by the oak grilled pears, swirls of Nutella, and sweet-tart yogurt ice cream. This could be the perfect dessert for people who don’t like super sugary sweets.

While a warm chocolate lava cake may be a steakhouse menu-staple, the peanut butter-filled version at Guard and Grace is anything but. This warm chocolate peanut butter cake is served with marshmallow ice cream and salted peanuts for a decadent twist that strikes the perfect balance between nostalgic and inventive. 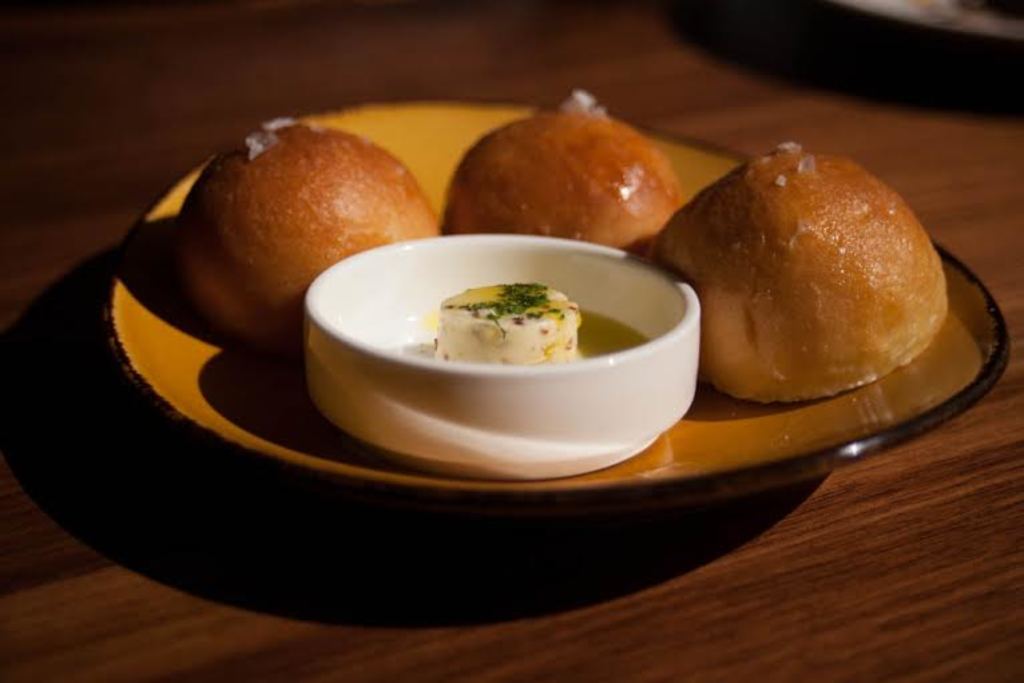 Potato rolls with mustard butter at Guard and Grace. Photography by Jacqueline Collins.

Speaking of nostalgia, Chef Walker’s ridiculously good potato rolls, served with a whole grain mustard butter are to die for. These rolls are served with dinner, and available by request at lunch. Trust me, you really don’t want to miss them.

For a restaurant so new, Guard and Grace has already solidified a solid dessert showing that puts it right at the top tier of Denver dining. This is definitely a place to keep on the radar for spring and summer. The outdoor patio will be the perfect urban respite all summer long.