Deep within the Rocky Mountains sits an iconic, small town locale, one hauntingly made for horror. Over four days, filmmakers, horror-enthusiasts and the casually curious alike gathered at the Stanley Hotel, excitedly gripping their seats in for more at the 2014 Stanley Film Festival.

Twenty-six horror films were shown throughout the immersive genre festival, highlighting the best in contemporary and classic horror while honoring visionaries and masters of the genre.

During the festival, 303 Magazine had an opportunity to sit down with this year’s Visionary Award recipient, SpectreVision. This trio of dynamic producers, Daniel Noah, Josh C. Waller and Elijah Wood, is taking strides in the evolving industry, pushing boundaries and changing the face of independent horror with films such as Cooties, A Girl Walks Home Alone at Night, Open Windows and The Boy. 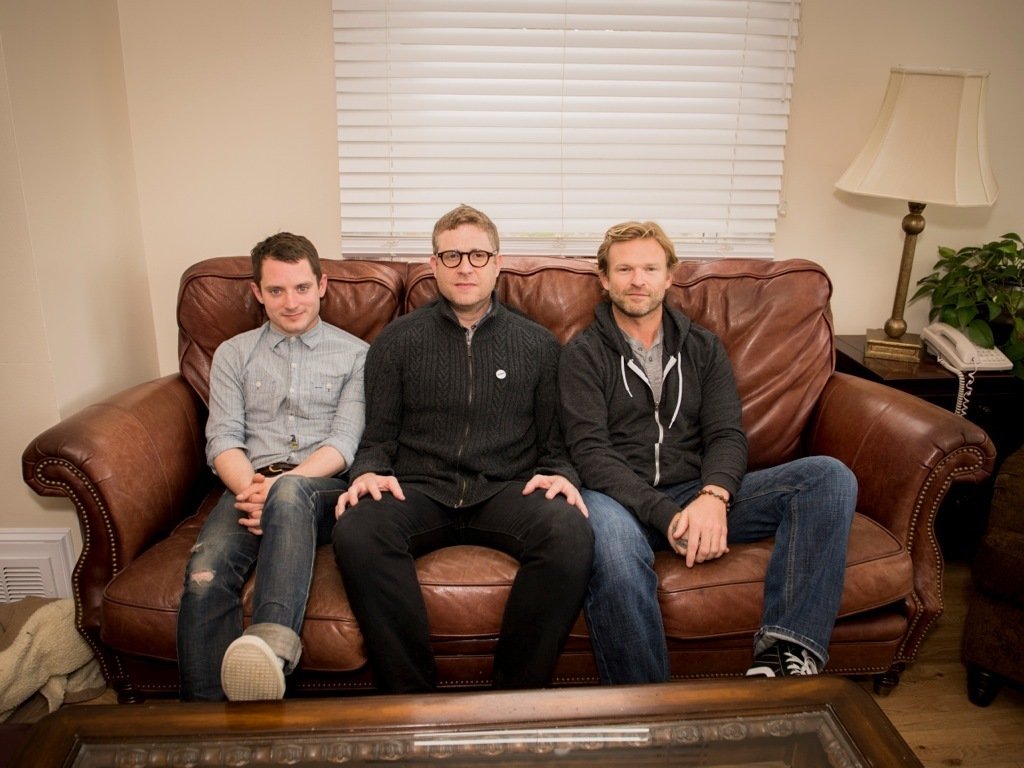 As artists individually, why did you decide to come together to build your own genre film company?

EW: I love cinema, I’ve always loved movies. I’ve been making movies for a long time as an actor, and I wanted to be involved in developing projects from the ground up. Supporting filmmakers that I love and being a part of the films I wanted to see and wanted other people to see.

DN: My impression was that this was sort of an impulse that you [Wood] had. I think he was just waiting for the universe to present the right circumstances. When we were working on this other project we all became very close, and we realized we were good collaborators and good friends.

JCW: It [producing] wasn’t a thought — it wasn’t something we had in mind. He [Elijah] kinda brought it up to both of us individually, at separate times, and then we talked, and said, ‘Does Elijah keep mentioning that horror company thing? Should we call him and see if we should have a meeting, and actually discuss it?’

EW: It was born at a time, in which the landscape’s really changed, in a beautiful way. In a sense the genre films and horror films, on a certain amount an independent level, that are being made, and the kind of movies that inspired us are being made in abundance now in the U.S., which is very exciting. When we started the company, there were very few places that felt like a home for the kinds of movies that we want to make, but as we’ve developed the company, more and more people are heading in that direction.

There’s this fantastic sense of community around genre and horror films that we’re proud to be a part of and supportive of other people, even if we’re not involved in them. I feel immensely proud of the other filmmakers and we’re sort of rallying in support of people who are doing the kinds of things that were why we started the company.

Are you making the films you would want to see?

DN: It’s very intuitive. With submissions, our objective is not to do the film. By approaching it that way, only the absolutely, undeniable projects make it all the way through. Where you go, ‘you know what, we can’t not do this.’

JCW: There’s no criteria either; it’s a gut thing.

EW: It totally is, we’re way emotional and gut driven.

What sets SpectreVision apart from other genre film companies? 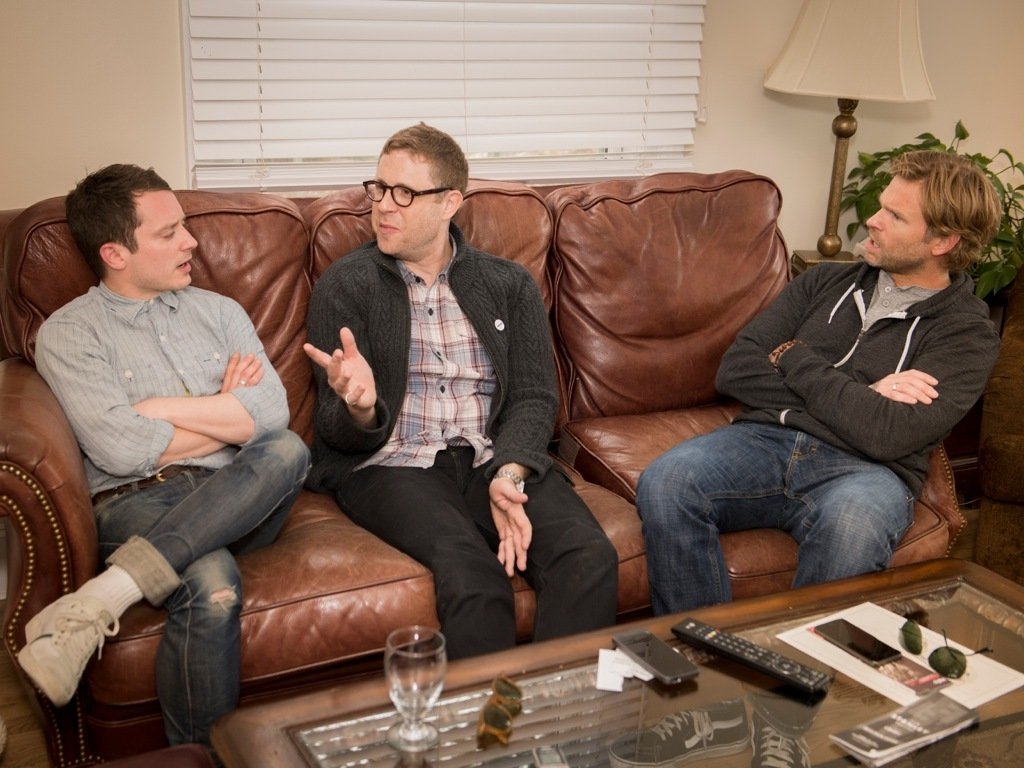 DN: Something that we really we try to do, which I don’t know if it’s unique to genre film companies specifically, but it’s the kind of spiritual mission statement.

Which is that, I think a lot of producers, understandably, the first lens through which they view a project is how can it be commodified. How can I market this? Where can I set it up?

We very decidedly try and do it in the opposite direction.

EW: For better or worse.

DN: Yeah, for better or worse. We try and have a heart response to the material and if we like something, we then figure out, after the fact, how to market it, how to sell it. 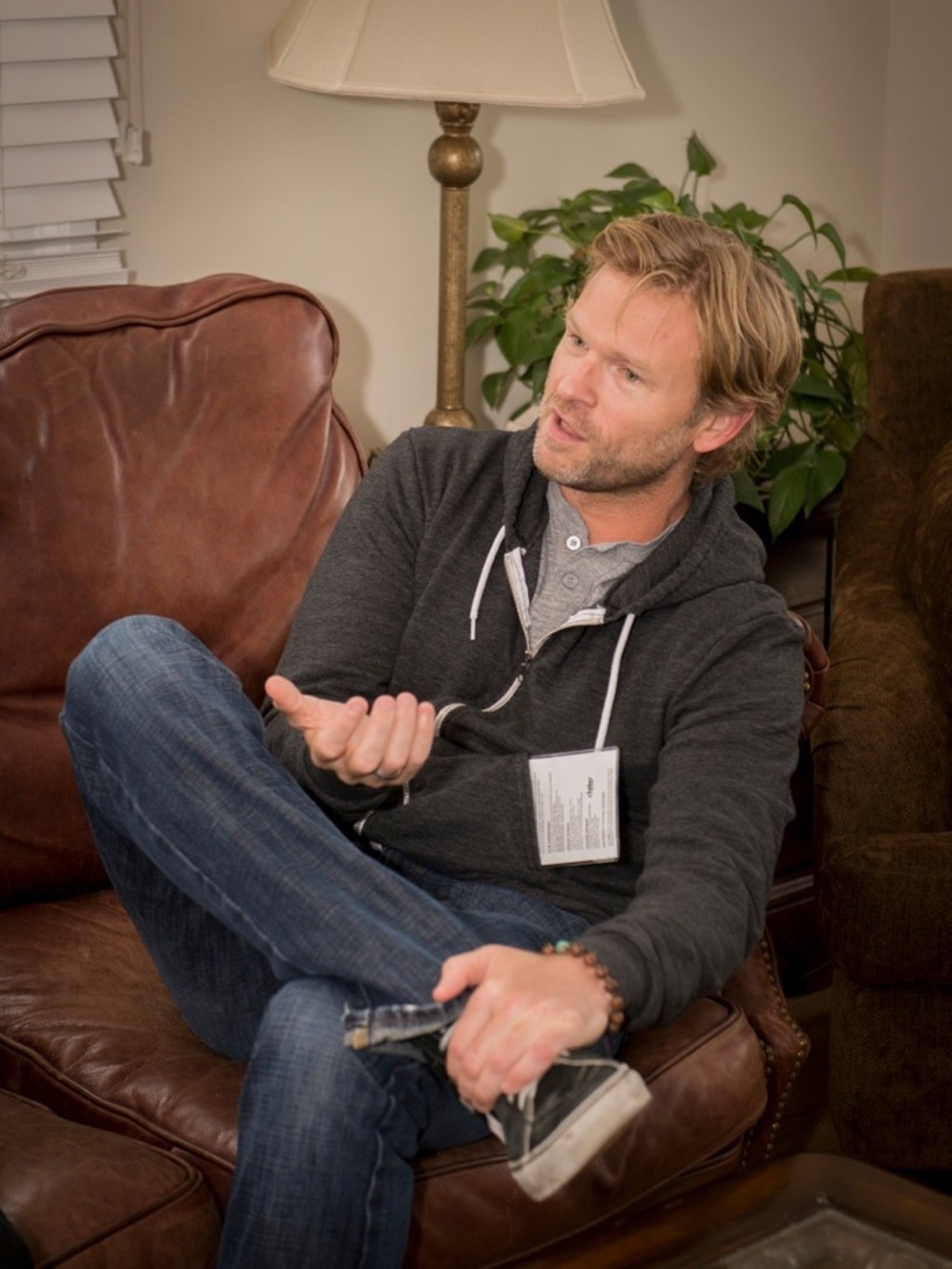 JCW: It’s producing with a filmmaker mentality. An independent filmmaker, who’s not doing it for the money, is not going to do a project if their heart’s not into it. So they fall in love with the material or it’s a script that they came up with and they figure out how they are going to get their movie made.

DN: I can’t tell you how many times we’ve had a reaction to our own material where an executive or a financier will say, ‘Oh, I loved your script, it made me cry. Unfortunately,  it’s just not something that makes sense for us.’

That’s the most wounding thing you can hear. What else is it supposed to do except make you feel something?

EW: We’ve been in situations where we’ve had meetings with other genre companies, where we’ve been given scripts, by them, that they wouldn’t do. Specifically because they couldn’t market it.

That was an interesting situation. I think it sort of exemplifies exactly what we do. That was a script that another genre company was like, ‘I love it, it’s amazing, but we can’t do this.’

Individually, you tend to be attracted to concepts or films that are slightly off-center, out of the box and pose interesting challenges.

Do you take that approach to producing as well? 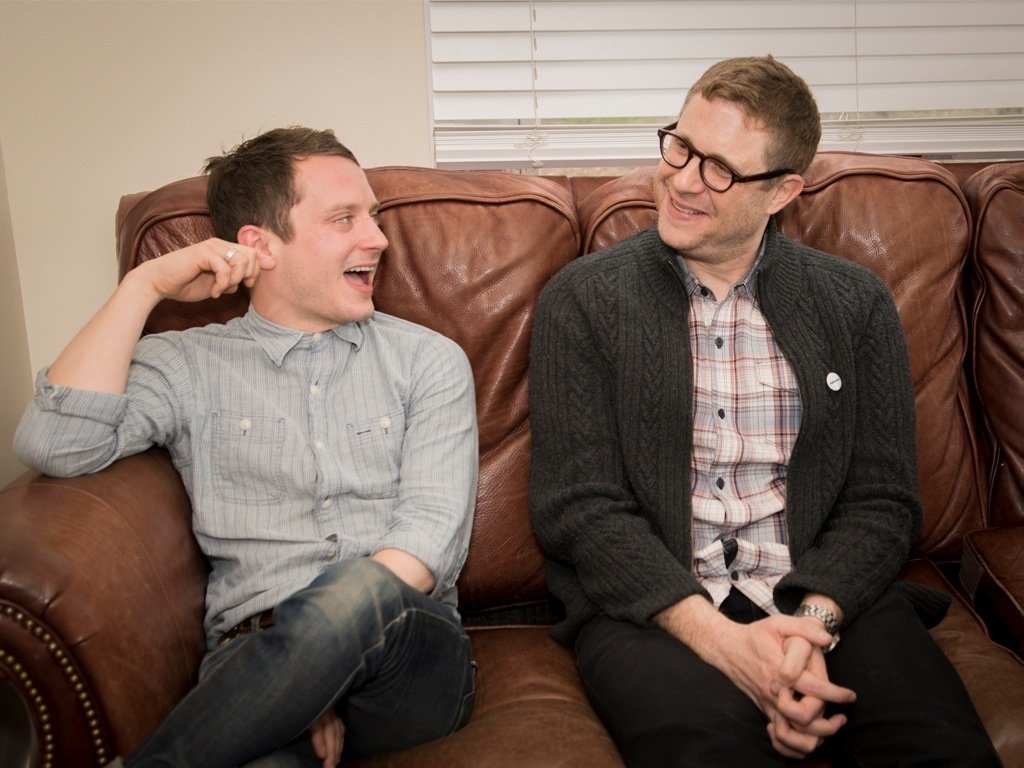 EW: I don’t know that we’re constantly looking to challenge people, although that is an element that excites us.

Specifically, as it pertains to horror films, one thing that was fascinating to us was to push the bounds of what one considers a horror film.

There are a lot of misconceptions about horror, I think people hold horror to easily definable spaces. I think horror is a multitude of things and that’s sort of something that excites us.

JCW: There’s no boxes that we check. No criteria. It just so happens the three of us tend to be able to feel exciting. We might like something, but if we’ve seen this before…

EW: That would be a consistent criteria we have, to not do something that’s been done before.

How do your films tackle today’s reality?

DN: I really firmly believe that you discover these things after the fact. You follow your intuition and then you’ll get halfway through making the film and you’ll go, ‘Oh my God this is a metaphor for…’

“Cooties” definitely has a lot to say about education, processed food, teachers. This film we’re making this summer, “Curse the Darkness”, which is probably the most literally political…

JCW: Yeah, to the point where we refer to it as an anthropological horror film.

DN: It’s very politically oriented in the text, not the subtext. All films are political whether they are or not. Lily, (Ana Lily Amirpour) who directed, “A Girl Walks Home Alone at Night”, is adamant she had no greater political agenda. But the fact the film is set in Iran, about a female aggressor, who victimizes Iranian men, made by an Iranian woman — that is inherently political, you can’t take that out.

Where do you see the future of the genre going?

EW: The future is bright. 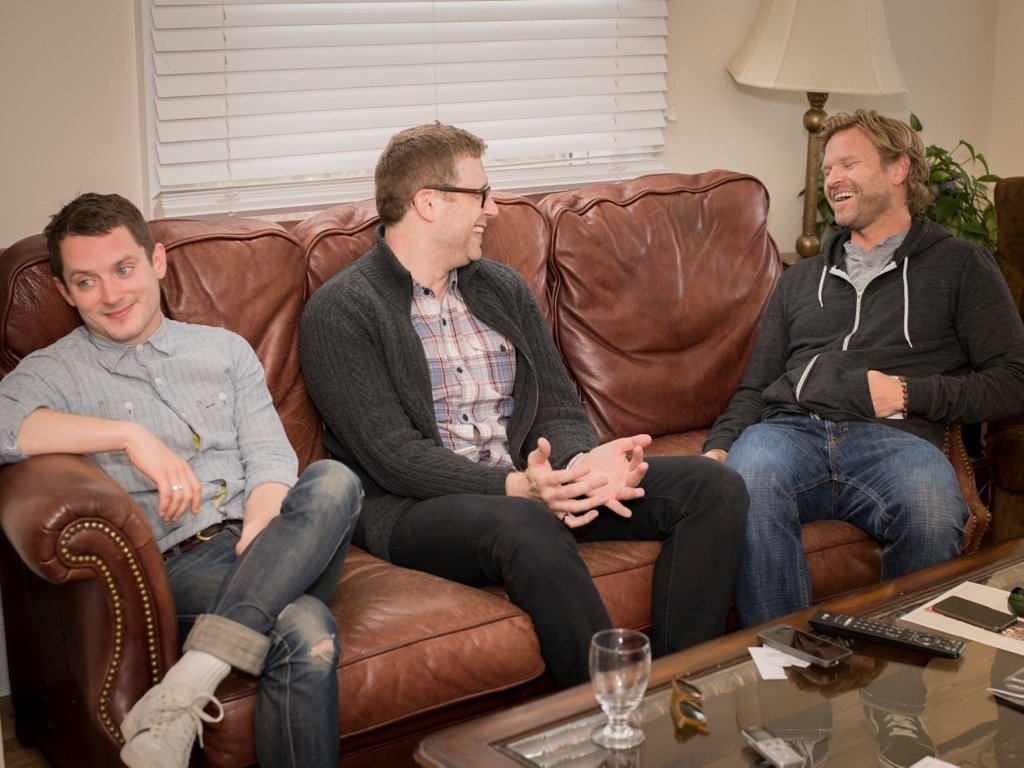 I don’t think any of us know where it’s going, but it feels like the landscape is so open, for people to do a lot of very interesting things, because it’s now it’s relatively primarily to the independent space.

There’s a lot of freedom for people to get financing for very weird, interesting forms of expression.

Some very interesting filmmakers are doing some shit that wouldn’t have happened five or six years ago.– THAT’S exciting.

It’s open for anything, and I don’t know where that can go.

Why is the Stanley Film Festival the one to be at and what’s it mean to be visionaries in this industry?

JCW: I think for us to comment on how it feels to be visionaries in the industry, I mean we don’t feel like visionaries.

EW: Our initial reaction to the award was like ‘WHAT?’ We’re super honored and extremely flattered, but we initially turned it down, because we felt like we haven’t done anything yet. We felt like we haven’t done anything to sort of earn that kind of honor. We feel like in a lot of ways we are literally just starting our expression and our company, and many of our films haven’t been released yet.

JCW: It wasn’t that we necessarily sought the festival out, we knew about the festival through Clay Chapman and Craig Macneill (The Boy) .

We knew it was at the hotel that inspired,“The Shinning”, and there was a lot of horror people. This award is because of our work, but it was a chance for us to come and have a vacation and spend some time with our peers.

EW: and our friends, and watch movies.

JCW: and watch cool movies, in a cool space it’s just, you know, why wouldn’t you?

EW: To have asked us to not only come up and receive the award and be apart of the festival, but to allow us to help with programming as well…We feel so embraced by the festival and it’s been really lovely to be a part of it in a greater capacity.

JCW: We weren’t even here for three hours, like an hour, before we were deciding we were going to be back next year. Like ‘Ah man, next year’s going to be awesome.’

(All agree and laugh.) 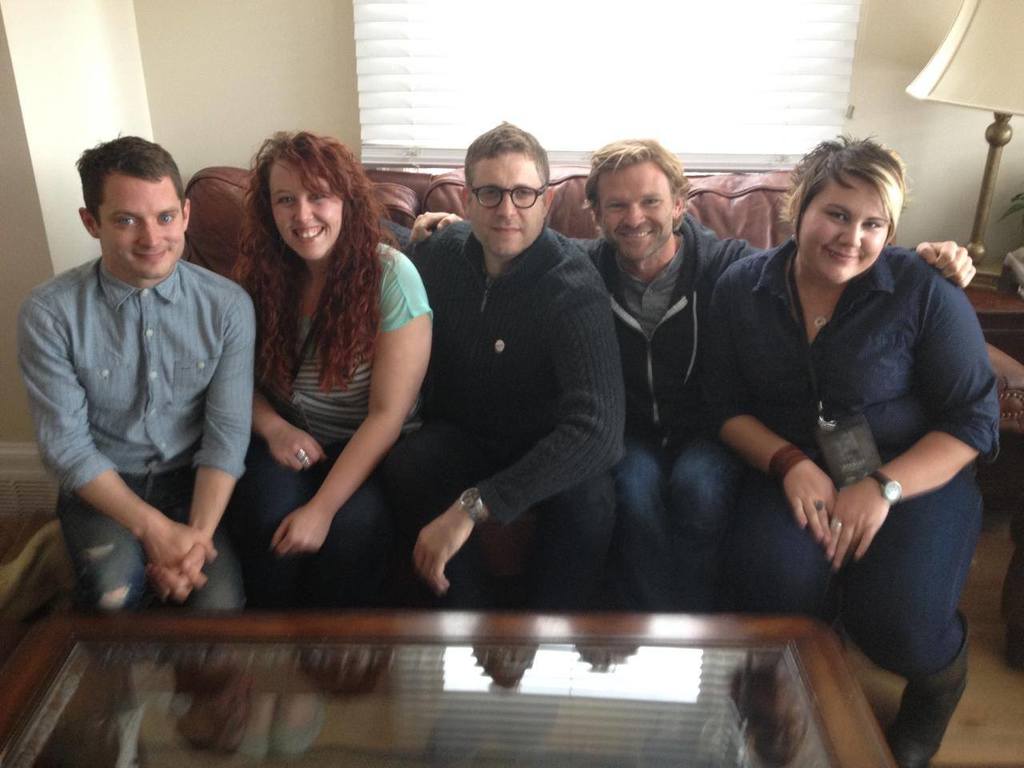