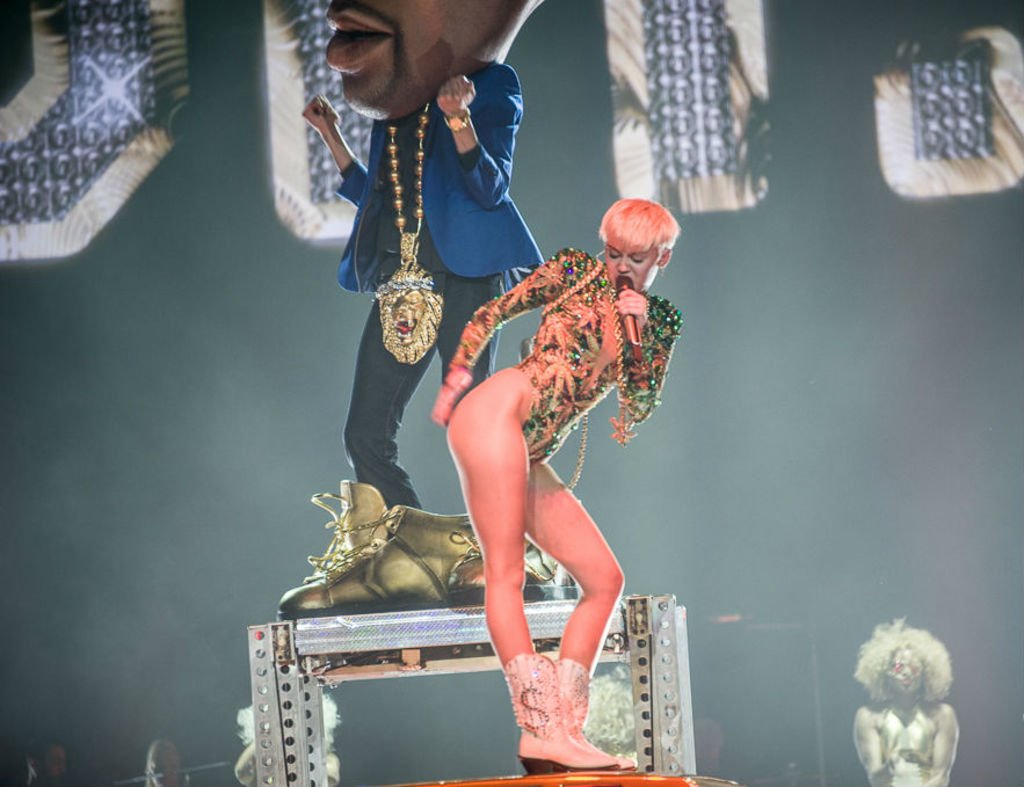 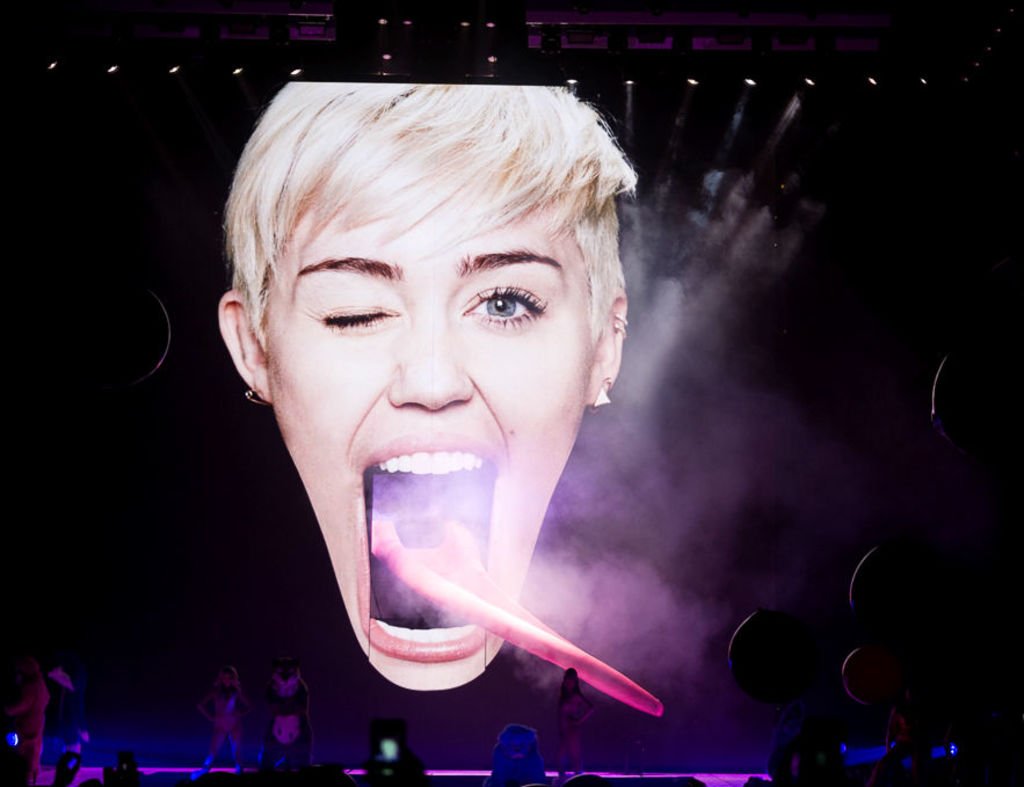 I didn’t intend on reviewing a Miley Cyrus show—or even attending one for that matter. But the comical pop gods rained down free tickets to a multitude of people who decided to grace the Pepsi center with their curious presence.

After two hours of Hannah Montana being proverbially stabbed with enough sex appeal to make Ron Jeremy blush, I’ve decided that Miley Cyrus wins at life. She wins at being a celebrity. She wins at telling Disney to kick rocks. And she wins at laughing all the way to the bank while her Bangerz tour repeatedly reels in unsuspecting show-goers with the promise of entertainment—wholly delivered.

If I was already born with celebrity, grew into huge childhood fame and then shed that famous image to create an even more notorious one, I would 100% make shallow pop music, sing it with a country twang then pack a suitcase full of hallucinogens to go on tour with a bunch of life-sized weeple key chains and dancing Aborigines. And then laugh because you are all watching.

While it can be argued that the set-up mirrors a bad Fear and Loathing trip and the choreography oozes subtle prejudices, it seems as if Miley’s efforts can be construed as anything from a cry for help to a full-blown attack on societal norms.

I’m neither a child psychologist nor a human drug test kit, but I will say this: whatever the intent that drove a half-naked Drako Malfoy doppelgänger to ride an Oscar Meyer wiener, dry-hump a midget on a stage bed or decide halfway through her show to begin singing country ballads without warning, the entirety of the crowd left questioning pretty much everything about everything.

Perhaps that was the objective of young Miley—to lace her performances with enough ambiguity to make you wonder if you either accidentally attended a Cirque Du Soleil show or stumbled into a narcotics anonymous meeting. 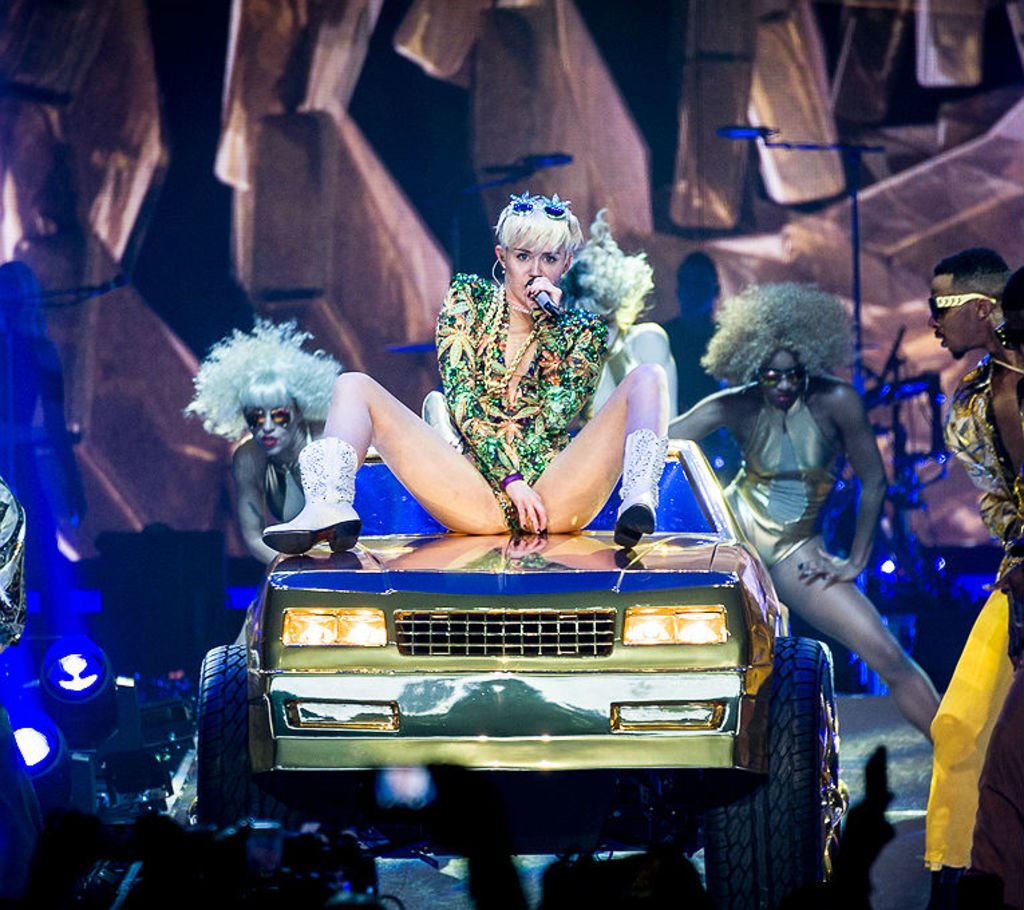 Or to make you wonder why we all just don’t render our own give a damn meter to a tangible zero.

While her voice doesn’t necessarily suck and her high notes surprised many, the deadpan music lacks anything that would remotely compete with the shocking theatrics of the ex-Disney star. From twerking repeatedly with anything on stage to convincing a good portion of the crowd to make out with one another in pairs of two, Miley Cyrus seemingly has the shudder factor all figured out.

“I want to make out with everyone here, but my mom says I gotta stop kissin’ fans or I’m gonna get sick!”

Yes Miley, it’s called MONO. And that machine you’re reading your own lyrics off of is called a teleprompter. And that thing you’re wearing is called a loin cloth. And the fact that the decibel level in Pepsi Center reached piercing levels is called winning.

So you swap spit with your fans, grind on your stuffed bears and grab fistfuls of your special place, because apparently your fans are in it for the long haul.

Oh yeah, and she also played “Wrecking Ball,” butchered an Outkast track and rapped more off-beat lyrics than Vanilla Ice on a rowboat. The rest of the show is blurred by the trippy screen aesthetics and the looming thought that someone brought their small child to this. Whether Miley made you feel unsafe, euphoric, misunderstood, distressed, confused or excited, one thing is certain:

For more amazing photos of the Miley Cyrus circus by 303’s own Glenn Ross, check out our gallery here.