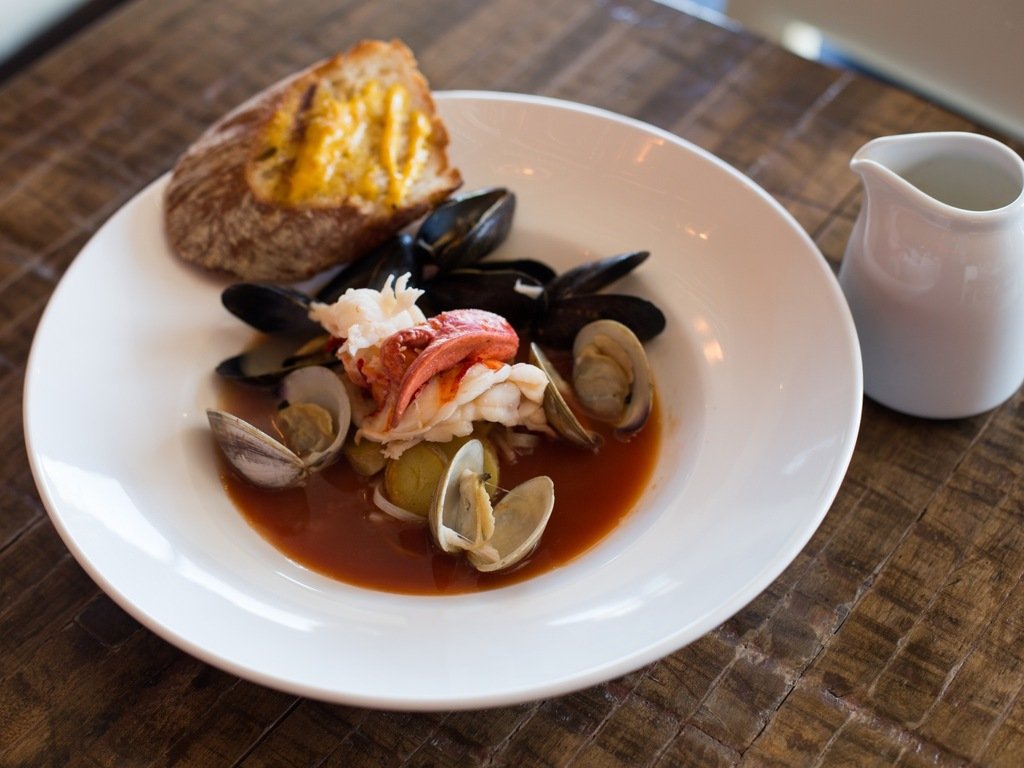 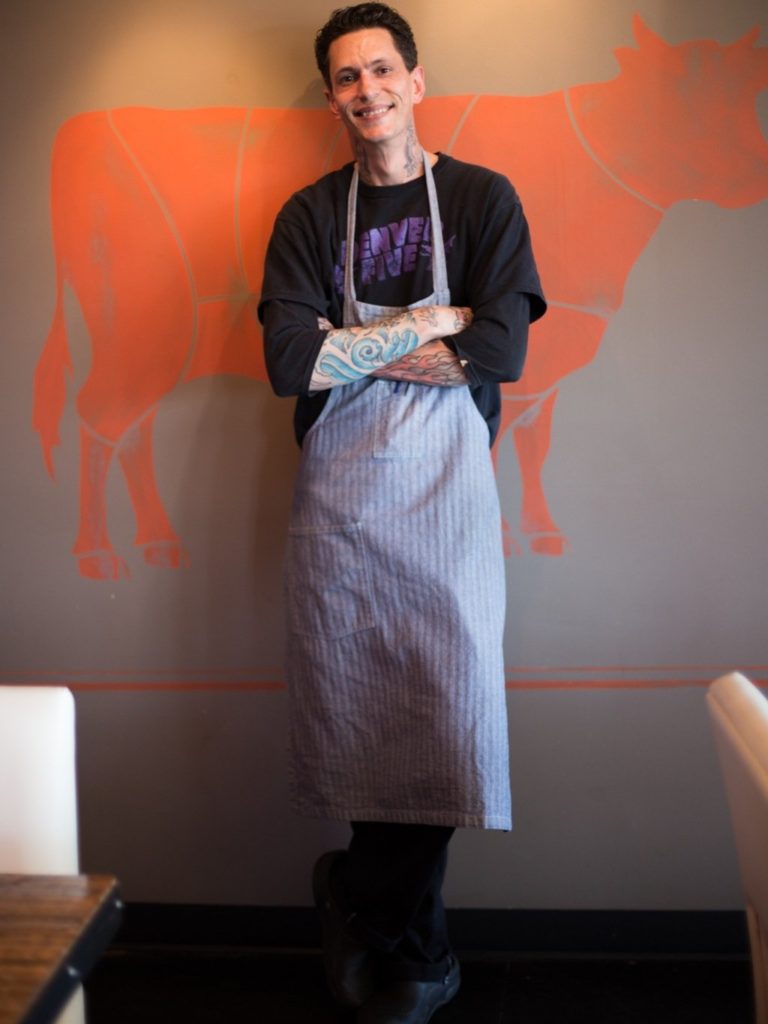 Pros: Seasonal, local dishes range from upscale (Lobster Tail Cioppino) to casual (Boxcar Burger), making this a neighborhood spot a step above most. A comprehensive domestic whiskey list, expertly-made signature cocktails, and a killer happy hour round things out.

Cons: Prices may be a tad higher than most places claiming the title of “neighborhood restaurant,” but that reflects the high quality ingredients in the technique-driven dishes here.

There are some exciting things happening at Central Bistro in LoHi, and that’s not just the whiskey talking. Chef Matt Selby, formerly of Vesta Dipping Grill and Corner House, has taken over the kitchen as executive chef, a position formerly held by the likes of Jason Clark, Lance Barto, and Gerard Strong. Selby is hoping to bring a fresh energy to the upscale neighborhood spot, which is known for its collection of American whiskeys, stunning views of Denver, and an infamous bright red HOT sign that casts most of the dining room in its glare.

And Central Bistro will likely become more prominently known for great food under Chef Selby’s leadership. He is over-the-top passionate about what he does—from the tattoos of fish and pigs covering his hands to the way he talks about the local produce and more obscure ingredients he uses to build his dishes. “The new menu is 80% different with 20% older signature dishes that regulars would be sad to see go,” he explains. For example, the Central Mac & Cheese, which has been on the menu since the restaurant opened, won’t be going anywhere. Selby started at Central right after the new year, and has been slowly getting to know the kitchen staff and vibe of the restaurant in preparation for the changes he wanted to bring. As far as the new dishes go, Chef Selby insists that “everyone owns the menu,” meaning that he really worked with the kitchen staff as a team creating dishes together, insuring that everyone was able to give feedback so they would enjoy cooking it and feel proud of it.

That being said, Chef Selby has been formulating the menu for a while now from the ground up—literally. They waited to debut it until the 25th of March so that the spring produce he plans to feature would be ready. As he describes it, “I’m a native of Colorado, and Spring here is really a different season every week, like mini-seasons all the time. We have a crazy late winter season, and I wanted to reflect that warm and cool weather in one dish.” At a recent tasting, it was clear that he executes this well in the ultra-light and Fresh Endive, Orange, and Fennel Salad, which he tops with deeply toasted Hazelnuts, typically an ingredient seen in fall dishes. “The winter oranges are still superb at this time of year, while the endive and fennel are just entering their season,” Selby says. 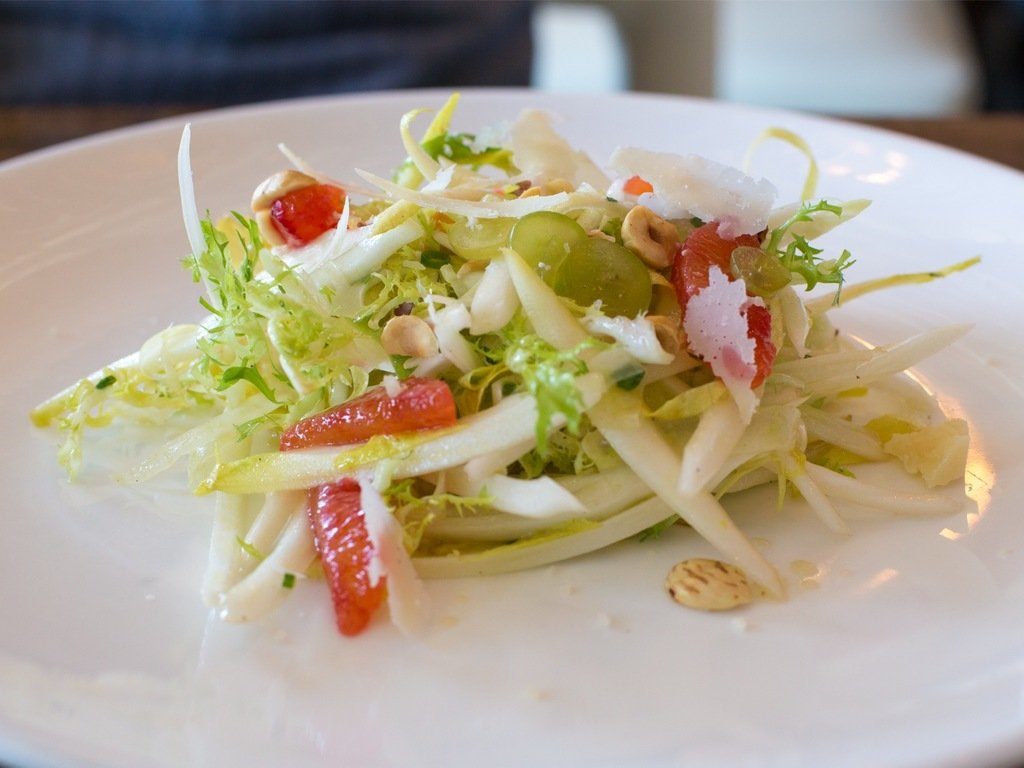 The Carrot Chamomile Soup brings an unexpected floral touch with the addition of the chamomile; an ingredient Selby first began cooking with at NYC’s Gramercy Tavern. Selby has crafted this soup to feel equally at home on one of our snowy “spring” days as it does on a sandal-worthy afternoon. The silky carrot puree is complemented with the zip of pickled spring onions and a sweet sprinkling of currants.

Selby describes himself as a chef who is “ingredient-obsessed,” and no where is this more evident than in the Seared Lamb Loin. The lamb itself was perfectly cooked, juicy and flavorful, but the fresh chickpeas it rested upon threatened to steal the show. These plump, green chickpeas were tender, lightly minted, and both familiar and novel at the same time, as we typically don’t see this ingredient in its fresh-out-of-the-pod form. This dish is pure spring on a plate, with the fresh, green vegetable flavors, grilled ramps, and lamb tied together with the rich, silky robiola fondue. Selby admitted that this was his favorite dish on the new menu.

I, for one, had a hard time deciding between the lamb and the Lobster Tail Cioppino as my favorite. Selby’s take on Cioppino transforms a dish with humble, fisherman’s-scraps origins and adds a few upscale touches. To start, the spicy tomato broth is poured table side, keeping the seafood from becoming overcooked. They’re definitely not skimping on the lobster here, with big chunks of tail and claw crowning the bowl. Again, this dish seeks to marry the comforting winter warmth of a soup with the light ingredients of spring.

Chef Selby loves the neighborhood vibe, but he knew that he would when he accepted owner Isaiah Salazar’s job offer. “People actually make eye contact when they pass on the street here. People are super friendly,” he says. He really appreciates the chance to work somewhere with a tight-knit feel of community, where he can also “honor the ingredients.”

I would be amiss if I didn’t talk about the bar here at Central Bistro, which features one hundred and sixty bottles of Domestic whiskeys and knowledgeable Bar Manager/Mixologist James Menkal here to guide you through the overwhelming choices.

While the whiskey list is ever expanding, featuring many rare bottles and vintages, the signature cocktails on the brand new spring menu here are truly outstanding. Take the Spring Views, which Menkal describes a bouquet of flowers, with gorgeous floral notes from rose water and lavender lifted by sparkling wine and lemon. On the opposite end of the spectrum, you have the Diesel Fix, a heady blend of Templeton Rye, Mathilde Orange XO, Angostura Bitters, and a touch of Absinthe. While this boozy cocktail packs quite a punch, it goes down smooth with masculine orange and smoke flavors.

Don’t skip over the Central G+T just because it seems commonplace. Menkal makes his own tonic water, using cinchona bark as a natural source of quinine and giving this drink a super complex, herbal (tobacco, smoke, leather) depth of flavor that makes for the best Gin and Tonic I’ve ever had.  One of the standbys off the old  menu that hasn’t changed is the Casanova , a vibrantly green tequila cocktail that’s not too sweet, featuring a nice dose of cilantro.

This may be one of the happiest hours in town with Tuesday and Sunday being happy hour all day long. And don’t forget about the bottle program here—buy a whole bottle of whiskey, the bar will keep it with your hand-made name tag on it for you, and every time you come in you’ll receive 10% off your meal. Whether you stop in for a happy hour cocktail on the soon-to-be-revamped patio or a decadent dinner, Central Bistro proves that a neighborhood restaurant can exceed expectations without losing that welcoming community feel. 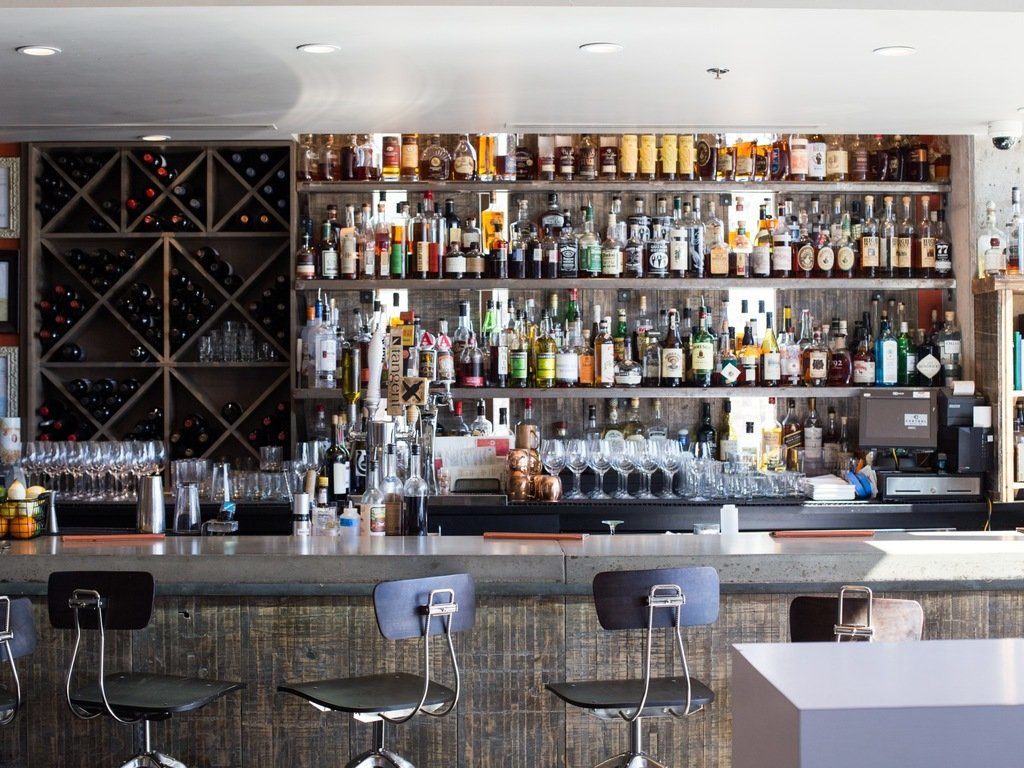