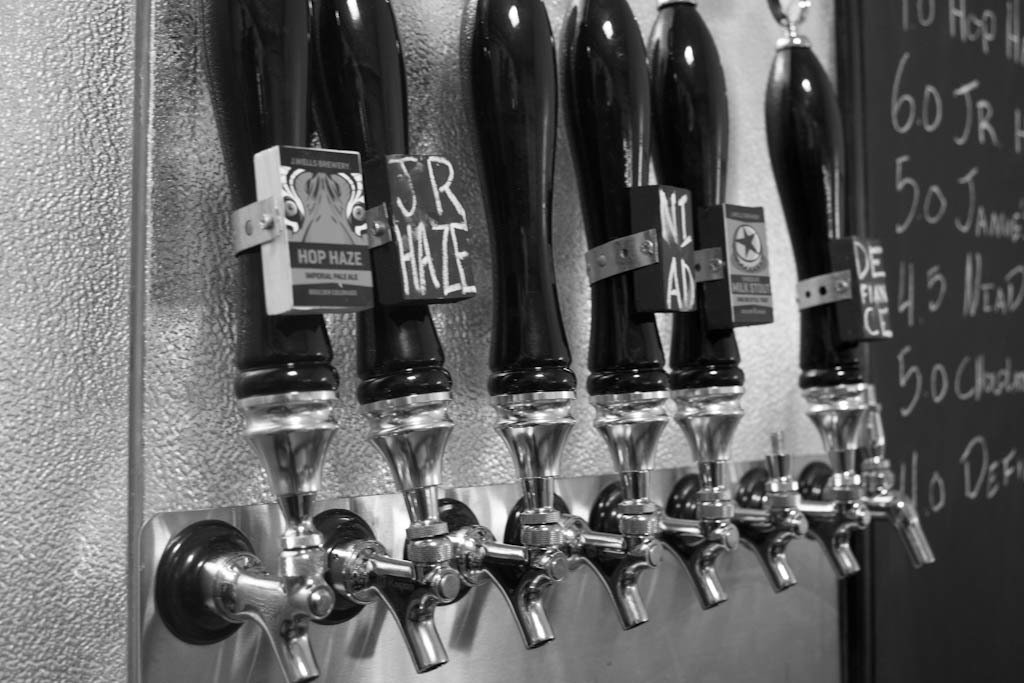 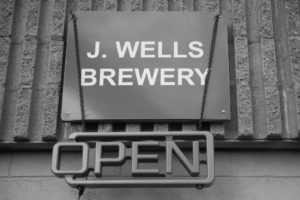 Cons:  These brews are hard to find outside of Boulder

With a handmade, 1.5 barrel brewing system tucked into the back of a cozy, 32 seat taproom, the J Wells Brewery is the smallest brewery in Boulder.  Their taproom was renovated this past December, but the feeling remains the same.  “It’s comfortable, and laid back,” he told me.  “We’re an older style tavern.  We don’t have TVs so that people can talk to each other.”  The focus on tradition goes beyond that, with Jamie Burtonizing much of his water before brewing in order to give it authentic English flavor.  (Burtonization is the process of treating water so that it matches the mineral content of beer brewed near Burton-on-Trent in  England.) 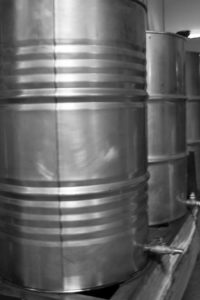 As someone who used to harbor dreams of becoming a self-made brewer, I find Jamie to be particularly inspiring.  “I had been brewing for years and I wanted to do it for a living,” he told me matter-of-factly.  He felt there was a demand for traditionally brewed ales that wasn’t being filled by the microbrew scene.  Defiance, one of the ales that he keeps on tap, even has a hand-pulled version, featuring entirely natural carbonation.  “All our beers are naturally carbonated,” he said, “but this tap is charged with only natural CO2 from the yeast.”

With some corners of the craft brewing world searching for a gimmick to set themselves apart, it was refreshing talking to a brewer interested in getting back to the roots of the industry, especially in a brewery small enough to allow for experimentation.  But all the talk of tradition means very little if the beers can’t back it up, so let’s dive straight into a breakdown of the beers and what can be expected from the J Wells taproom.

“The water [in Boulder] is so pure, we have to treat it to make English ales.”

Chocolate Milk  Stout:  The only J Wells brew on tap without a true name, this beer stands out amongst the ranks of stouts I’ve tried.  With a black on black color that reveals slight amber when backlit, it reminded me of a barleywine with its relaxed flavor, mouth-watering malt smell, and creamy smoothness.  There wasn’t much lacing or head, but I found myself getting through this beer too quickly for that to bother me.  If you prefer huge flavor from your stouts, you might find this one  not challenging, but if you’re interested in a smooth, drinkable, tasty brew that highlights what malt can do for a beer, this is the black stuff for you. 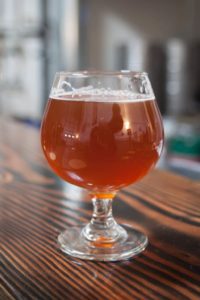 Jamie’s Pale:  Bringing less alcohol than most of the big beers on tap, this pale sports a wonderfully floral, citrus aroma that prepares you for the somewhat hoppier than expected taste.  It leaves your mouth cleanly without the cloying hops aftertaste you get from some pales which tricks you into thinking this beer is milder than it is.  It’s got a golden brown color that’s somewhat cloudy with little head and little lacing, but if you plan to be at the taproom a while, this would be the beer for you.

Niad:  I’m not going to lie, this is the last beer I tried, and with all of them sporting a beefy abv, I might’ve been a little far gone by the time I hit Niad.  It brings an amber-brown color with a light coffee aroma and very pretty lacing.  There’s no hop flavor to speak of, but really nice toasty bread sweetness that’s subtle but sublime, and leaves a slight tobacco aftertaste that is much more pleasant than it sounds.  It’s lighter than you expect from a brown, and incredibly easy drinking, which would make this an excellent session ale.

Defiance:  Easily the most interesting beer experience I’ve had in a while, it’s difficult to know how to critique this beer.  A true English-style bitter with an brown-amber color and khaki head, it’s got a nice amount of bitterness without being overwhelming, and the Maris Otter malt brings a nice sweetness.  The hand-pulled version is lighter and has less head, but also brings good lacing.  I found it to much more drinkable than the CO2 charged tap version, which was creamier and more effervescent, but was much more filling.  I highly recommend getting both to do a side-by-side just to expand your beer horizons.

Jr. Haze: A more lightly hopped version of the Hop Haze (which I’m saving for last), this IPA is an Orange/Amber color with an intense floral and citrus aroma.  It’s got great head and lacing, making this the prettiest beer at J Wells, and the slight grapefruit flavor paired with the slight sweetness also makes it a great IPA.  You’ll see why in a bit, but this beer was somewhat overshadowed by the other offerings, but this beer is incredibly drinkable for an IPA and shouldn’t be overlooked. 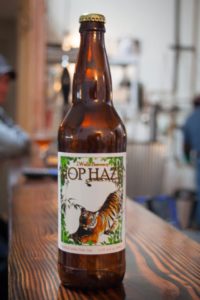 Hop Haze IPA:  While all the beers at J  Wells are excellent and worth a try, this is the beer that should put this brewery on the map.  It’s got a golden-amber color that’s slightly cloudy and brings a nice head to your glass.  At 9% abv, I expected this beer to have a fair amount of alcoholic burn in addition to the hops assault of a double IPA, and so I steeled my taste buds.  What I got was a completely unexpected experience.  It’s got an amazing balance between the alcohol, the yeast, the bitters, and the malt that I honestly didn’t think was possible.  It tastes like it wants to be a Belgian-style IPA, but it doesn’t bring the telltale Belgian aroma.  For the amount of hops in this beer, the smell is also nicely mild.  Your tongue won’t know what to do with itself.  I almost want to say it’s deceptive to call this an IPA simply because I think Jamie has created a style of beer unto itself.

While one of the things I really appreciate about American craft brewing is the amount of creativity the brewers bring onto the scene, there is something to be said about tradition done right.  At J Wells Brewery, this is what you get–a lineup of amazing beers brewed in the traditional English fashion put together by hands guided by 20+ years of experience.  Make time to get down to their taproom.  You won’t regret it.

All photos by  Jackie Collins.