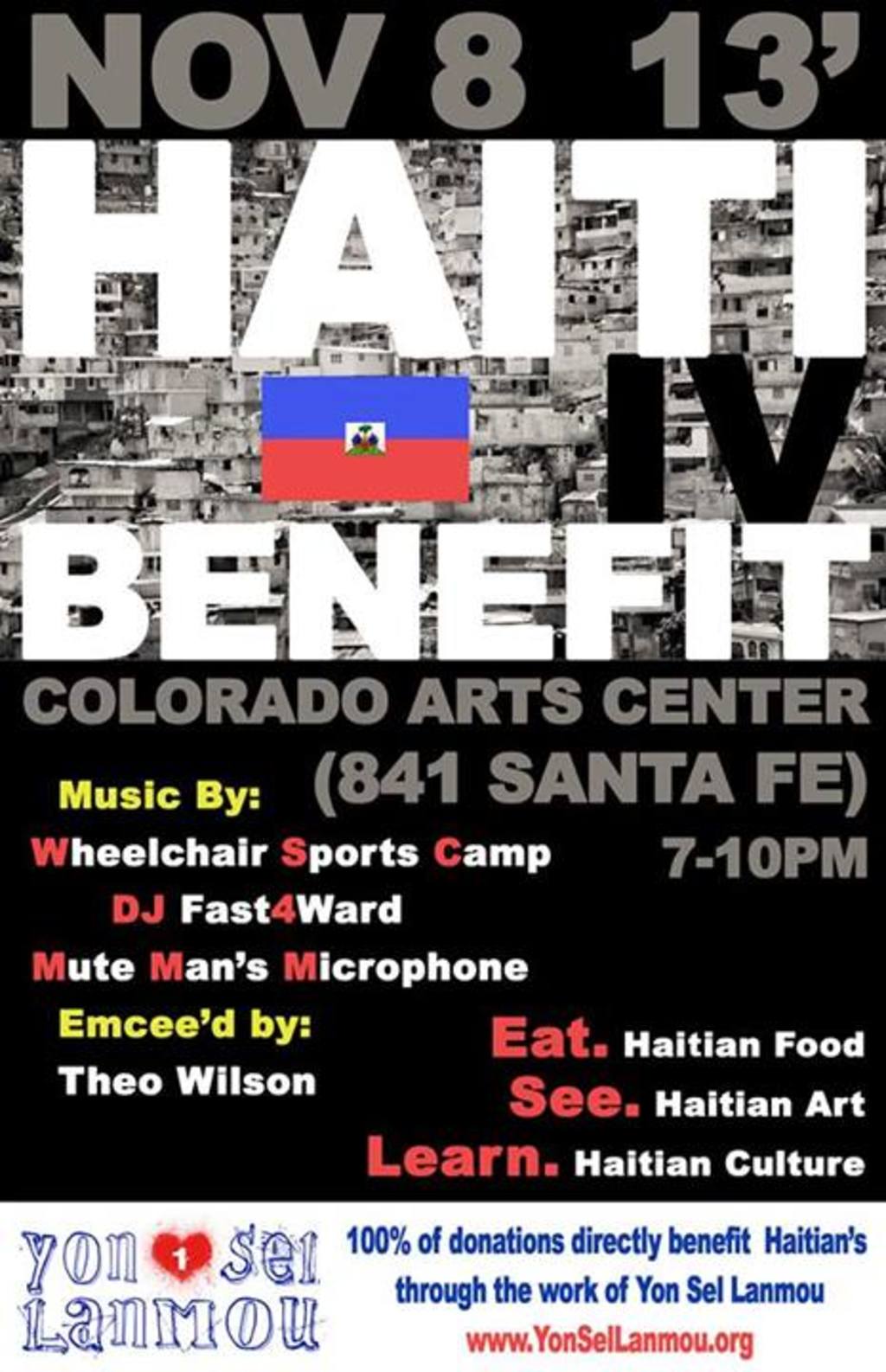 Tonight, Yon Sel Lanmou is holding its Fourth Annual Haiti Benefit concert to educate the community about Haitian culture, history and needs. The goal is to raise funds (and more than a little fun) that will directly benefit Haitians through various projects that support art and sustainability. The family friendly event will feature Haitian food, dance and art, along with performances by Mute Man’s Microphone, Wheelchair Sports Camp, Felix Ayodele as DJ Fast4Ward  and Theo Wilson at the Denver Art Society. The suggested donation is $5-10 but no one will be turned away.

This fourth annual benefit is marked by the release of a track called “Blak San Pousan,” recorded in Haiti, and written by Haitian artists Dice & Fashion. The song’s inception (translated in English from Creole as “100% Black”) comes with a story from Kalyn Heffernan, front woman for band, Wheelchair Sports Camp’s. Heffernan produced the song after Dr. Greg Cronin, a biology professor from CU Denver brought back the vocals that were pre-recorded with very little equipment. She re-built the song with trumpeting from Joshua Trinidad and live drums by Welele around Dice & Fashion’s vocals. The result is a track with international passion you can feel, even if you don’t directly understand the words.

Heffernan explains, “A friend of mine, Dr. Cronin put together a Haiti benefit that we played about a week after the earthquake happened. He went down to there to do some sustainability work and after he got the JP camp, (the tent city built by residents after the disaster), and he realized there wasn’t even enough infrastructure to talk sustainability.”

Dr. Cronin spent time with the residents despite volunteers being warned away after certain hours due to “safety reasons,” and he realized almost everyone was doing one thing-rapping. After spending time recording their vocals over stock beats, Dr. Cronin traveled back to the states and passed the vocals to Kalyn for production and that’s where the magic happened.

“When he got back I was remaking the tracks around the vocals that I like. It’s been really cool for me because it’s a totally different approach to producing. These cats will go on for like 10 minutes a piece a piece so I can make volumes of records. I sent a bunch of my beats, along with Qknox, Selko and Babah Fly’s beats down to Haiti and I’ve done about eight songs so far. They’re fucking dope. I don’t understand what they’re saying half the time but you understand it because you feel it,” says Kalyn Heffernan.

The experience she describes as “humbling” has led to a goal of visiting the country, “I can’t wait to get to Haiti. That’s the goal and hopefully next year we’ll get to meet a lot of these rappers. Last year through a Haitian band that played at the benefit, we were able to raise enough money to get equipment to leave there in Haiti and a lot of the rappers are still making music with it.”