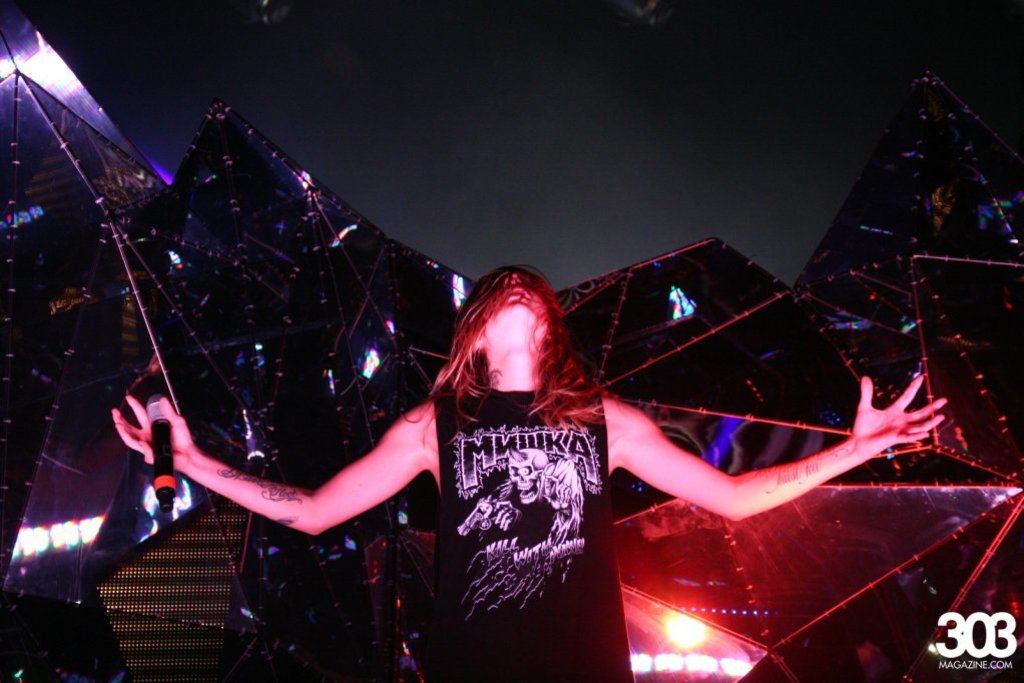 Brain Pickin’: Getting Wet With Krewella 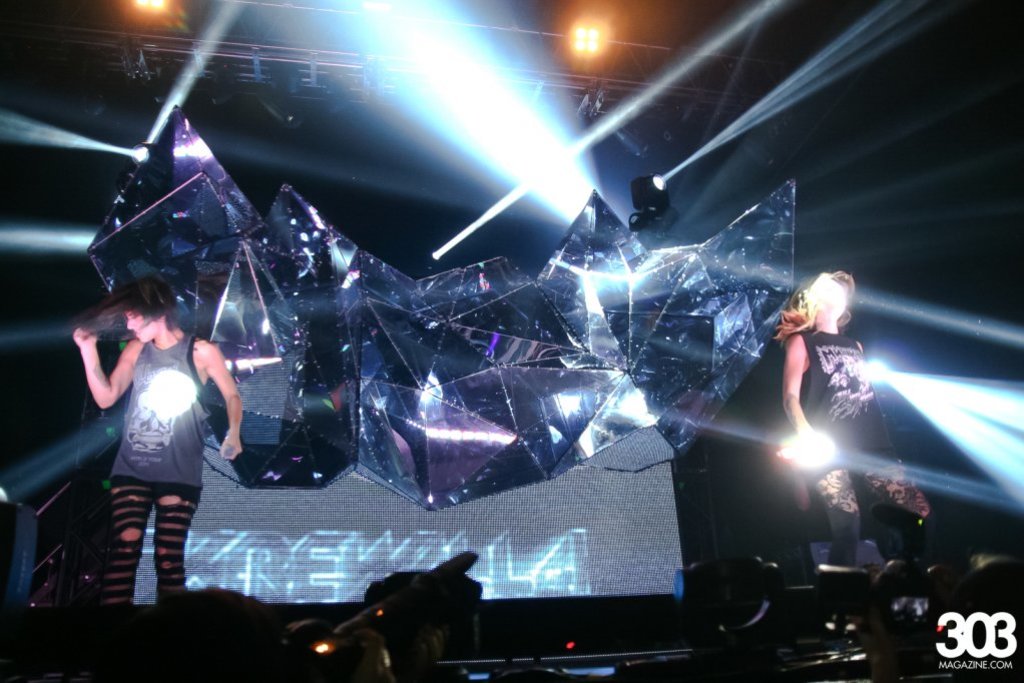 Nearing the one month mark since the release of their debut full-length record, Get Wet (via Columbia Records), electro/dubstep/pop trio, Krewella, brought the house down at Colorado’s own First Bank Center. Krewella’s monumental “Get Wet LIVE Tour” featured Seven Lions, Paper Diamond, Candyland and a special guest DJ duo for the night in Zed’s Dead.

A calm electricity of anxious, potential energy hummed throughout the sold out First Bank Center — thousands that patiently waited for Krewella to take the stage. With live vocal work from sisters, Yasmine and Jahan Yousaf, whom make up two-thirds of Krewella, the trio hit the stage, lighting the entire dance floor on fire. “Live For The Night,” the opening single of Krewella’s lengthy set, promptly sent the entire audience into a state of rhythmic disarray — an inescapable vibrant sensation that propelled the harnessed energy into full motion. Yasmine, Jahan and producer, Kris “Rain Man” Trindl, reigned over the audience, standing atop a crystal mountain DJ booth that captivated even the most reluctant of listeners. 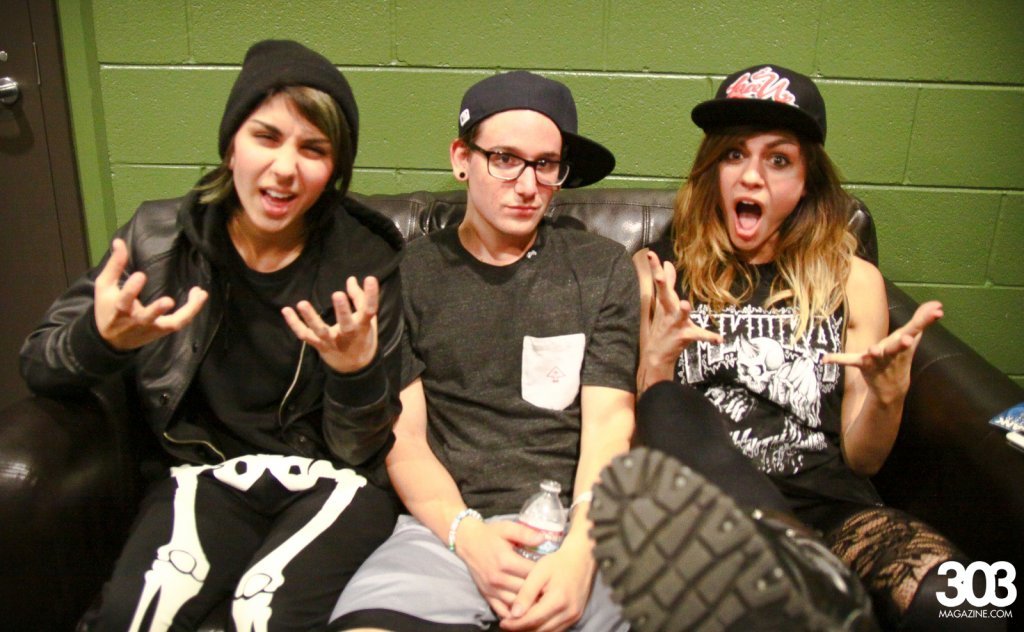 From the Get Wet singles (“We Go Down,” “Enjoy The Ride”) to the Play Hard — Krewella’s debut EP — favorites, “Killin’ It” and “One Minute”, and the Adventure Club co-produced track, “Legacy (Save My Life),” Krewella stormed across the stage, flooding the audience with a healthy dose of sensory overload. The Yousaf sisters were on point all night, impeccably handling both vocal and producer responsibilities. From the initial vocal radiance that pierced through the speakers, to the wonderfully crafted set-list that transitioned from song to song in smooth, album-like accordance — Krewella not only lived for the night, but they owned the night.

The electronic, pop onslaught that continued for a solid hour and a half finally came to a close with Krewella’s international hit sensation, “Alive.” The crowd sang along in anthemic exuberance as Krewella owned the stage for one last song…until the much expected encore. “Come And Get It,” a track featured on Get Wet, but first released on Krewella’s Play Harder remix EP, held the crowd in wonderment and awe for the last few dying minutes of the set.

Krewella tore through a total of 20-plus songs on the night: a majority of tracks featured on Get Wet, guest remixes of their own originals, unreleased fan favorites and many remixes of current and former pop and rap singles that have had their own respective, massive acclaim. It was a good night to be had by all. And fortunately, 303 Magazine was able to go back-stage with the trio to find out more about the history of Krewella, making Get Wet and what to expect in the future.

You can check out 303‘s interview and Krewella’s music video for “Alive,” below: 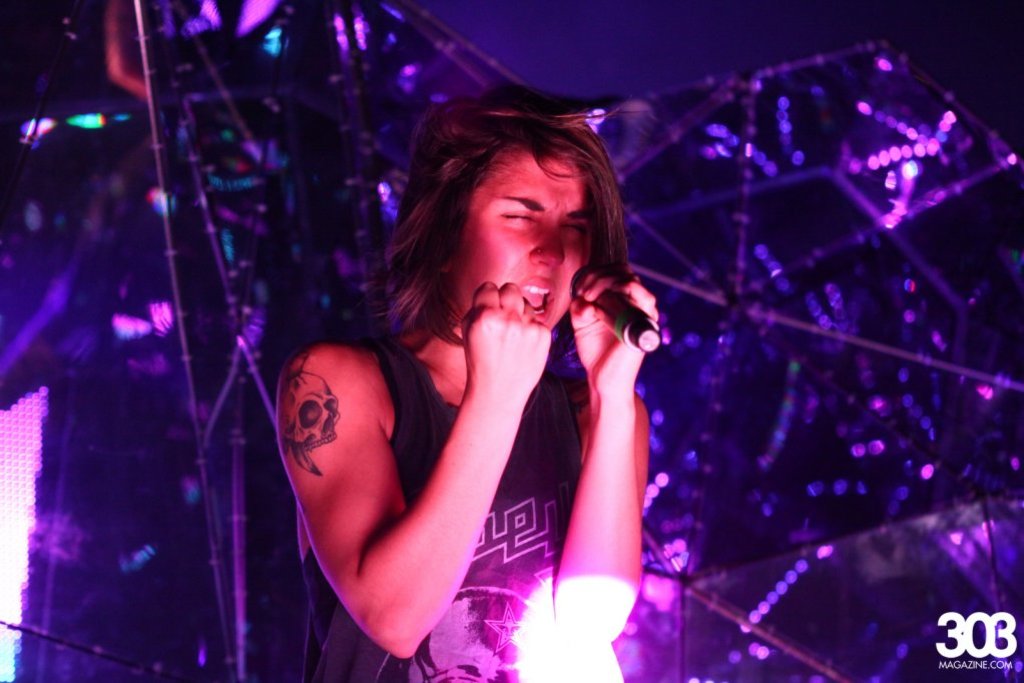 303: You three started Krewella back in 2007 where you began infusing genres like pop, dubstep, trance and house together, at what point in the process did you finally know that this was your own unique sound, that this was Krewella?

303: When did things start picking up speed, becoming more of a music career?

Yasmine (Vocals): It’s been two years now, that we’ve actually been booked for shows and I think it was maybe the release of “Killin’ It.” And then we released a video [for “Alive”] and it kind of went, not viral like crazy viral, but viral on our standards cause we were nobody. So, that’s when things started picking up. So, that was January 2011? No? No, 2012.

Yasmine: [Laughs] Yeah, so that was about when. 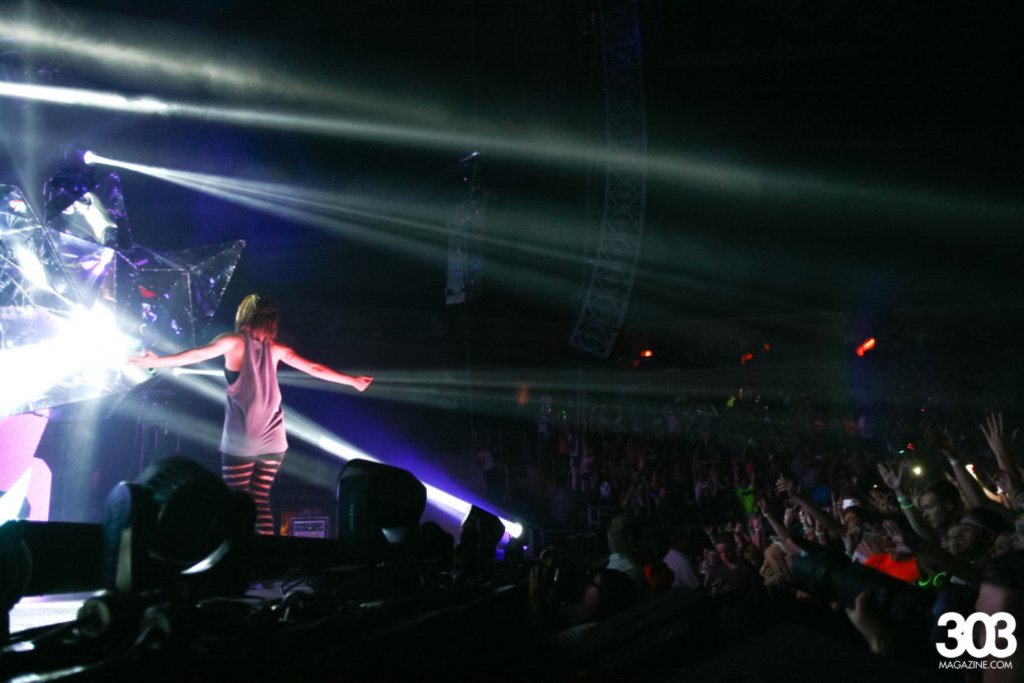 303: The one minute-thirty sample tracks?

Yasmine: Yeah! And it’s really cool now that the album is released, people are really picking favorite songs, and you’ll see them freak out when it comes on and we start playing it; people are gravitating towards different songs, and it’s really cool. We spent almost two years making the album, so it’s almost a relief to get it out there finally for everybody to listen [to]. But, it’s also cool to finally be able to perform these songs. Cause for the longest time we had to keep them under wraps and not DJ them or sing them.

303: So, what are some of your favorite tracks that you enjoy performing, or enjoyed recording?

Jahan: I’d say, performing, all of us like our drum and bass tracks like “Come And Get It” and “We Go Down.” I’d say those have the highest amount of energy.

Kris: [Recording] “Ring Of Fire” was a lot of fun. And playing it.

303: How was working with Travis Barker (Blink-182) and Patrick Stump (Fall Out Boy) on “Dancing With The Devil?”

Yasmine: Well, we actually hopped in the studio with Patrick, so that was insane because we’re all huge Fall Out Boy fans. I’ve been listening to them since I was 11, so it’s like the pinnacle moment. 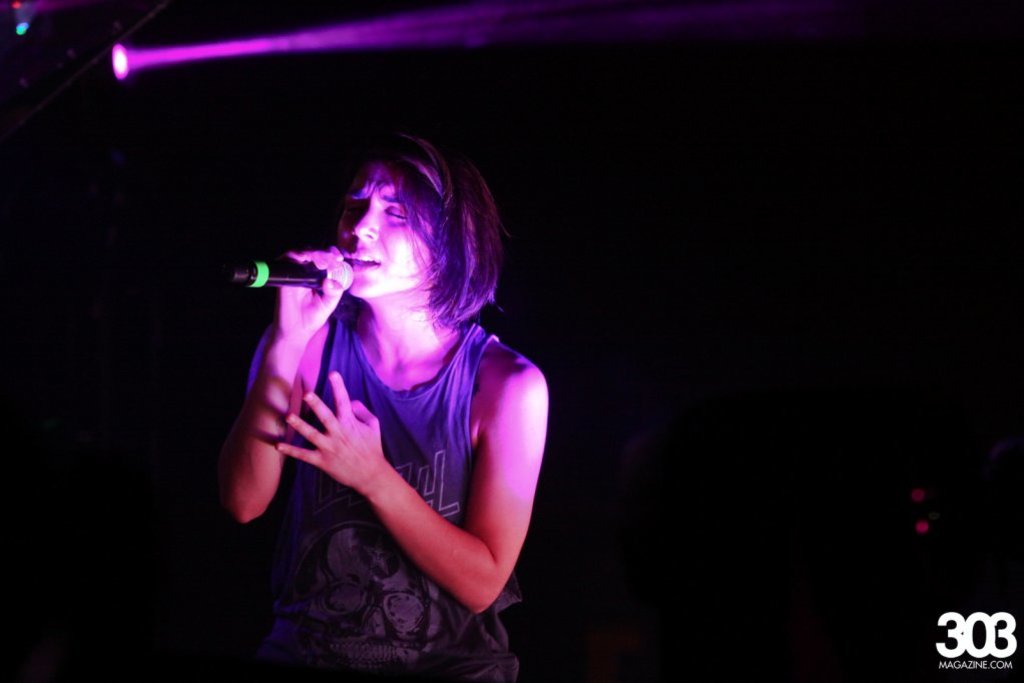 303: And he’s definitely a pop rock idol of sorts.

Yasmine: Dude, I love him. And he’s a nice guy too, he really [is]. We had a very interesting writing session with him — something that was different than we’d ever done. And we didn’t actually get to meet Travis. It was all internet stuff.

Jahan: Kris put in his drums he [had] sent to him.

Kris: Well, it was fun, the Travis stuff, because we sent him like a rough [demo]. You know, and then he played, he did whatever he wanted over it and then I got stems back. So, I then took them and, sort of, programmed a little bit of them, rearranged them, and stuff like that, and then produced around them. And then it was just super cool, you know?

303: That’s awesome. Especially because Blink-182, personally, is one of my favorite bands and have had a huge influence on me.

Yasmine: They’re like everyone’s favorite band of all time, which is why it’s such an honor that Travis drummed on [Get Wet].

Kris: It was funny too because the first version we got, he was basically playing my drum track that I had already programmed. And then, so I was like, “Okay, I want more fills.” And then they sent me it back and it’s a fill every four seconds or six seconds, you know what I mean? So, I chose my best ones.

303: Since the album features such a vast array of different styles and sounds, like the more vulnerable, ballad-esque track, “Human,” can we expect a similar vulnerability in the future?

Jahan: Absolutely. I know so many of Yasmine’s demos, and she knows so many of my writing demos. We have a ton of tracks like that, it’s nothing new. We were writing songs like that three years ago. Our fans just weren’t ready for it. They didn’t know us and they didn’t care about our story … Obviously, now it works because people are more invested in us and we’re actually more invested in our fans too. We hear their stories and they tell us their stories back stage; [they share] their emotional moments, [they] tweet at us and show us pictures of their tattoos. That kind of shows you as an artist that you’re so much more beyond just your club ‘four-on-the-floor’ jam.

303: How does the songwriting process, writing lyrics specifically, work between the two of you (Jahan and Yasmine)?

Yasmine: I think for Get Wet, I’d say the majority of the album, we were in the studio together, writing. And it was just completely collaborative. And we’d just be writing lines, one whole line together and filling in the blanks for each other — melody and lyric-wise. And then, sometimes we’ll write songs separately and then say “Hey, I wrote a verse” or “Hey, I wrote a hook, ‘Do you want to write the rest of the song?'” Or like, “What do you feel with this? Do you like this?” And it will kind of come together. 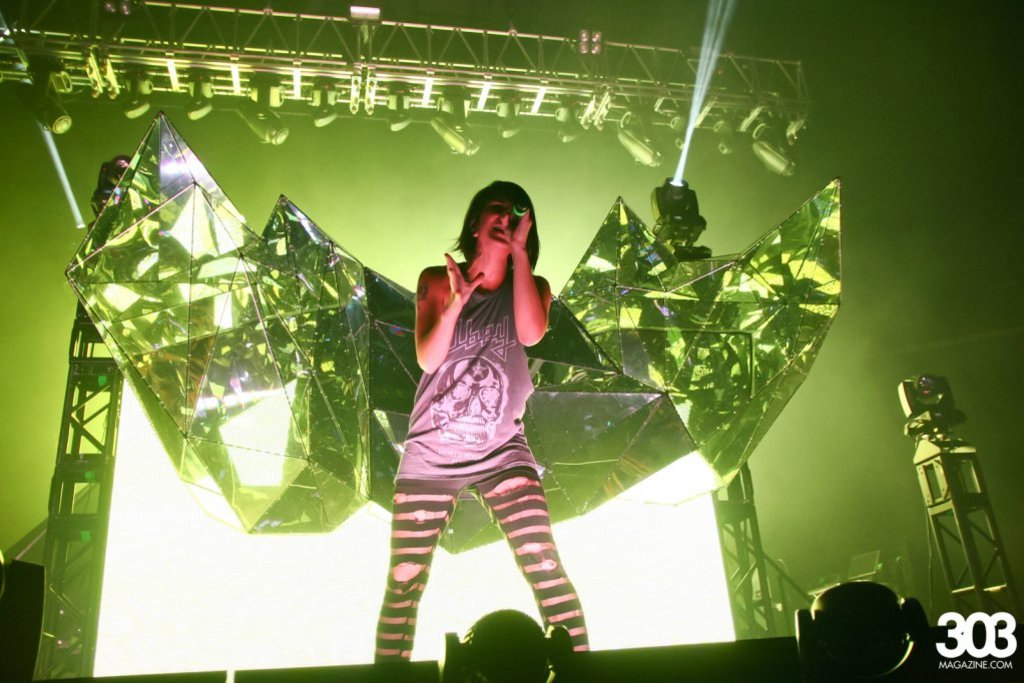 303: So, would you then pick who’s specific voice would sound better on certain tracks or during certain verses/choruses?

Kris: Sometimes I do it.

Yasmine: Yeah, Kris will. He knows our voices so well.

303: Yeah, definitely. So then, what are some of your main influences that you’ve had along the way as musicians?

Jahan: Yasmine and I — we’re sisters – we were raised in the same household and we were raised on everything … We had access to the internet, so from like age 13, I was on iTunes looking at playlists [on] the iTunes Store that people customized themselves, like just normal people. And then also, like Limewire, I was spending hours every week just downloading music. Our generation has access to so many different genres, so like, pop punk, punk rock, metal, classic rock, new wave, EDM/dance.

303: So what are some favorite artists that you’re still listening to these days?

Jahan: The three of us? We have [a few] bands we agree on.

Kris: Linkin Park is definitely the one we can—

Jahan: Linkin Park, Chromeo, System Of A Down—

Yasmine: The Faint. Love them.

303: Any last words for your fans or any new listeners out there?

Jahan: Definitely dig into the album because there’s so much more … beyond just the songs that you’ll be hearing on the radio or the songs that are being [chosen as] the singles right now. Just like you said, “Human;” we have this ballad, songs with different emotions. And to the fans, thank you for the support.