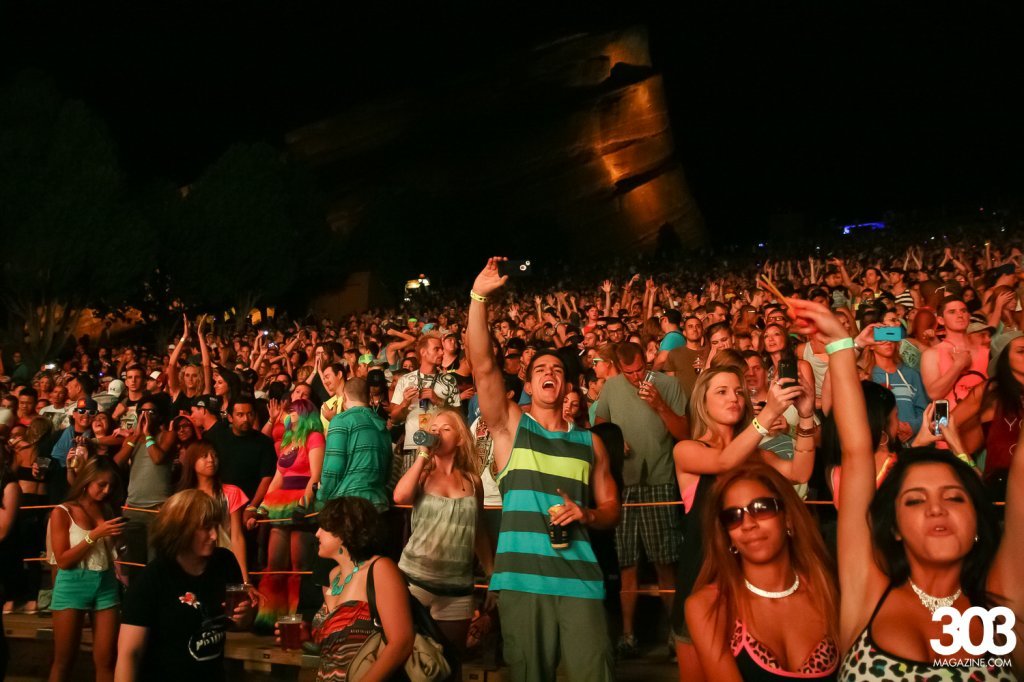 The ultimate soundtrack to a party. One sentence that accurately describe the 2013 Global Dance Festival (GDF) night two events. After a visually stunning first night of GDF, you’d be hard pressed to find a group of artists that could top the first night’s lineup, which makes the second night all the more special in living up to expectation and hype.

It’s difficult to pin-point specific artists that made night two such a hit, simply because each and every artist brought their “A-game,” but, there were a select few stood out against the others, such as the Santa Barbara-based electronic group, Candyland, who performed on the NRG Stage.

Candyland, comprised of Ethan Davis and Josie Martin, led a savage, aural assault on the vibrant crowd atop the Red Rocks Amphitheater. Visually stunning luminescence lit up the mammoth red rock behind the NRG Stage, a visceral sensation when coupled with the uncontrollable urge to dance. Candyland’s bass pounding tracks bombarded both, willing and unwilling listeners, making their set on one of the two smaller stages at GDF, an unforgettable display of raucous fun.

DJ’s weren’t the only artists capable of owning the stage and captivating the crowd at GDF, and Emma Hewitt was living proof of that on Saturday. As a singer/songwriter, Hewitt stood out almost instantaneously as she hit the stage singing live in front of thousands. Live vocals.

Now, this isn’t an everyday occurrence at GDF, or at any other dance festival or nigh club for that matter, as almost every vocal track heard throughout the night came from a pre-recorded audio track, a clip from the base track or a sample from another song. So, witnessing something this rare on that second night of GDF, by a woman so seductively drop-dead gorgeous like Hewitt, was a real treat.

At one point during her set, Hewitt even took it upon herself to interact directly with the crowd, climbing over the barricade in her knee-high black leather boots, coming face to face with the amorous audience. Rich with crystal clear, harmonious deliveries, Hewitt’s melodies meshed perfectly with her electronic audio counterpart, cutting through the crisp, summer air, sending the audience into a frenzy, a thirty minute dance-induced coma — setting the stage for the great Sander van Doorn.

This was not just another year at GDF, this was Sander’s year at GDF. Cheery, effervescent melodies more conducive to the ardor and sexually driven notions of the young crowd scaling the tops of Red Rocks, took hold. The music became much more than just music, acting as a catalyst for the intimate desires of impassioned young adults throughout the entire venue. Van Doorn captivated the audience, forcing his music into the hearts of thousands, making Global Dance Festival 2013 an absolute hit.

303 Magazine was also able to catch up with the extremely talented hip hop producer/EDM adept, DJ Carnage, for an interview at Global Dance Festival 2013. You can check that out here:  Carnage Interview