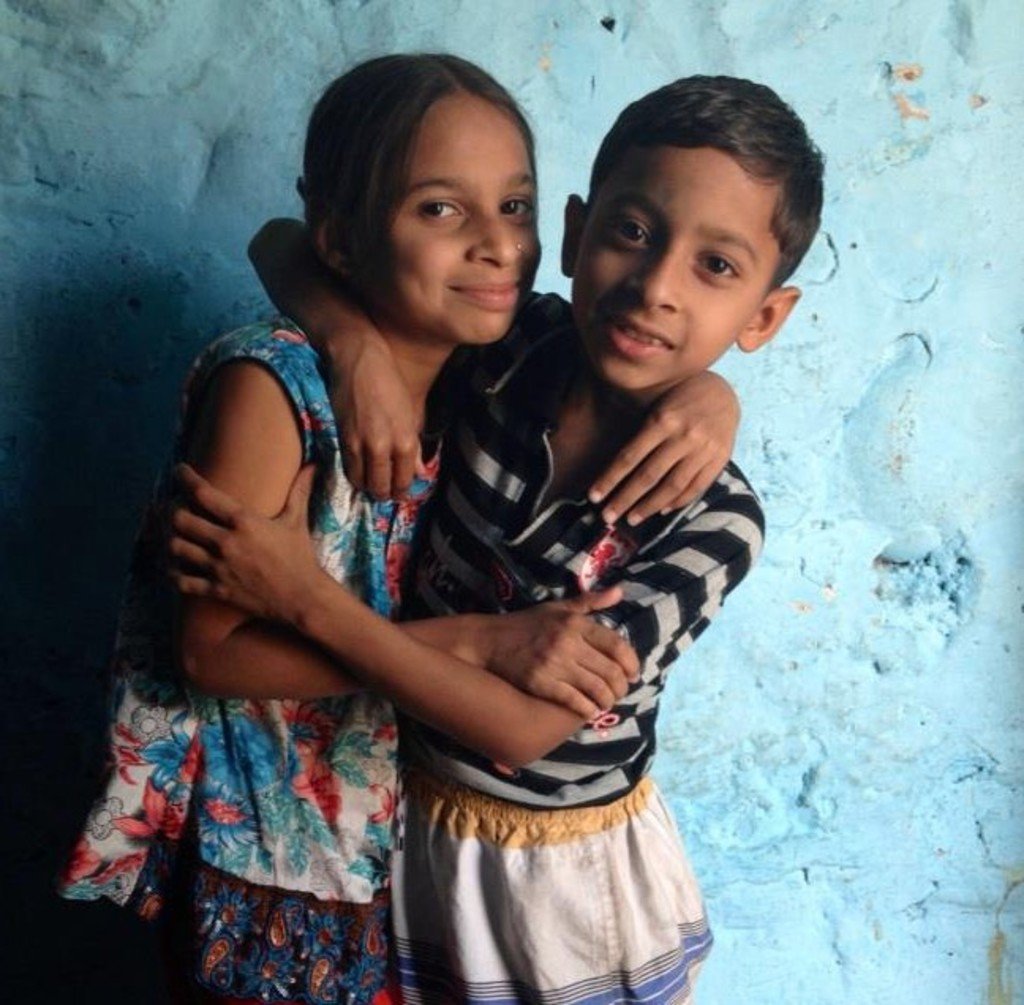 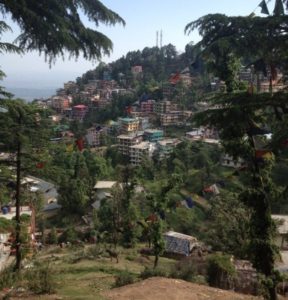 Genocide sucks. Especially when it’s been going on for over fifty years. The situation looks bleak for Tibet. But in Dharmsala, India, the ex-pat Tibetan refugee community thrives. The Dalai Lama holds residence here after fleeing his home country in 1959 after the “Battle of Chamdo,” or the Chinese invasion of Tibet (also ironically referred to as the “Liberation of Tibet”). The Dalai Lama temple is located here in the area known as McLeod Ganj, which is a growing settlement of colorful buildings clinging to the lush green mountainsides of the lower Himalayas. Bald monks roam the streets and occupy the tea stalls, their flowing maroon robes draped casually over one shoulder like a toga. Short women with long black braids hanging down their backs are in traditional Tibetan dress, conservatively wrapped in striped aprons (paang-dens). They quietly sell crocheted socks, canvas bags with “Free Tibet” emblazoned on them, and stickers portraying the Dalai Lama’s ever-smiling face. The menus are full of Tibetan delicacies, such as thenthuk (flat noodle soup), thukpa (long noodle soup), and momos (dumplings that can be steamed or fried), which greatly contrast with Indian food as far as flavor, spice, and complexity goes. Tibetan food is comforting and mild, even bland at times. But the cooler weather of the mountains is ideal for settling down to a large bowl of soft noodles and steaming broth (especially after that bout of sickness that has left me cringing at the slightest waft of curry).

The small towns surrounding Dharmsala creep up the mountain, as buildings are piled on top of one another and steep and narrow stone stairways serve as shortcuts between low laying streets and their high winding neighbors. Each and every balcony has a magnificent view of the valleys below. Not a bad seat in the house. The incline of the streets remind me of San Francisco, but as you ascend they often split up into dirt paths and cobblestoned trails that wind off into infinity through the jungle and up the mountains. The famous Bhagsu waterfall is only a brief stroll from our guest house, it’s water surging down several stories of boulders before trickling into small cascades and shallow pools near the base where the local monks do their laundry, laying out their robes to dry on rocks in the strong afternoon sun. 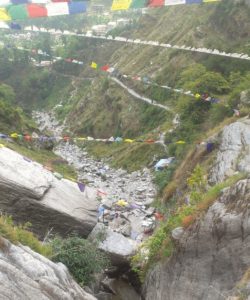 We recently hiked an 11km loop between Dharmkot, with its fantastic sunset views from the ridge overlooking valleys on either side of rice patties and villages, up to Triund and back down to the Bhagsu waterfall. Swarms of tiny white butterflies get swept about in the light breeze and giant brown hawks dive and soar impressively. Friendly looking stinging nettles grow everywhere and are disguised by hundreds of ladybugs inhabiting their thorny leaves. Talk of this alleged town of Triund was overheard for days before be embarked on our quest to see it for ourselves. Walking up and up the rocky but well maintained trail, we passed through teeming pink rhododendrons and occasional prayer flags strung up through knobby trees that grew practically sideways out of ledges and cliff faces. On the way up, in what seemed to be the middle of nowhere, shoddy looking tea shops would pop up, constructed of wood and tarps and wedged between legs of the trail. As you might imagine, gulping down cups of sugary milk in between hiking up steep inclines isn’t exactly refreshing (alas, they didn’t have any Gatorade for sale) but there certainly is something uniquely India about it. Once we reached the peak, the clouds closed in around us and thunder rumbled ominously. My British friend and I laughed and pointed at each other as our hair literally stood on ends, while my boyfriend hurriedly ushered us into one of the ramshackle tea stalls that comprised of the “town” of Triund and warned us of the danger of lightning strikes. We waited out the brief storm (or at least until our electronically charged bouffants deflated) before venturing out to further explore through the persistent but unoffensive hail. 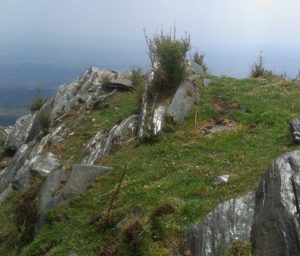 As it turns out, Triund is literally three tarp-roofed chai stalls, a pile of prayer flags, a small Buddhist stupa, and a few grazing goats- and a killer view over the opposite side from McLeod Ganj of the massive jagged snow covered peaks. Carpeted with shaggy green moss and giant inlaid boulders than shone wet from the recent precipitation, Triund itself actually resembled something of the way I imagine Scotland but with a distinctly Himalayan backdrop. The roundabout route we took down was significantly less traveled, as we had passed gaggles of tourists on the way up (even a barefoot guy and his girlfriend in strappy sandles), and we saw but one lone Indian man, a few shepherds and tons of goats on the way down. This path was about as much of a “trail” as Triund was a “town.” It was vague and steep and absolutely breathtaking. As my British friend put it, the view of the horizon was so spectacular that you could almost see the curve of the earth. When we made it all the way down, about six hours after initially departing from Dharmkot, we celebrated with a hearty meal of lasagna. Apparently, Italian food is Dharmsala’s specialty, as there is plenty of it and a majority of it is completely decent, with imported cheeses and homemade pastas and high prices (for India), ranging from 150-250 rupees for a meal (about $3-5).

I have encountered some interesting folks en route lately. A middle-aged, tattooed, ex-raver-turned-shaman Brit who resides up the hill in Dharmkot, who is nice but enjoys hearing the sound of his own voice a bit too much, invited us to partake in a “ceremony” with him. He spends months in Peru each year and had brought back with him some San Pedro cactus, a hallucinogen derived from mescaline used in Andean traditional medicine and when ingested “connects directly with your heart chakra and is purely feminine.” It is supposed to enlighten your emotions and make you feel a connectedness with nature. We politely declined. 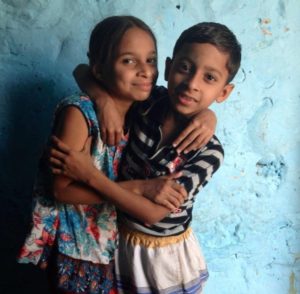 The owner of our guest house’s good friend from Bombay has been visiting for the last week also. He is a fast talking English tutor named Ashoka, after the ancient and notorious Indian emperor whose symbol is apparently printed on all Indian currency (he shamed us for not knowing this). Ashoka lectured us on how famous temples in Bombay have begun charging entrance fees and how he will not go there anymore because it is turning religion into a business. He also informed us that as of late, it is common for young men in Bombay to suffer from fatal heart attacks due largely to the stress of living and working in the busy city. In the evenings, he tutors the seven year old daughter of the guest house owner in English, repeating for hours lines like “Mother is in the room” and “The cake is on the table.”

On the bus ride from Rishikesh to Dharmsala, which really was quite the party, I met an American girl from Kentucky, which was surprising because I had never met anyone from Kentucky before, let alone halfway across the world- except for one guy I used to work with at Keystone- whom she obviously knew. Small world. But wait- then it was discovered that the British girl she was traveling with had previously been in Pokhara, Nepal. When I reminisced of my time spent last year in Pokhara, I mentioned a Turkish friend who had been a paraglider instructor there- whom she had also met there this year! Go figure.

The weather here in McLeod Ganj is just delightful, but in a week’s time we will head slightly north through Parvati Valley towards Manali to check out some smaller villages and hot springs. But this place is truly special. I will be reluctant to leave. The gentle natured, soft spoken Tibetans and the fresh mountain air provide a relaxed atmosphere and there are more trekker-type tourists, which is a refreshing change from the Goa hippies and the Rishikesh yogis. It almost feels like… home.