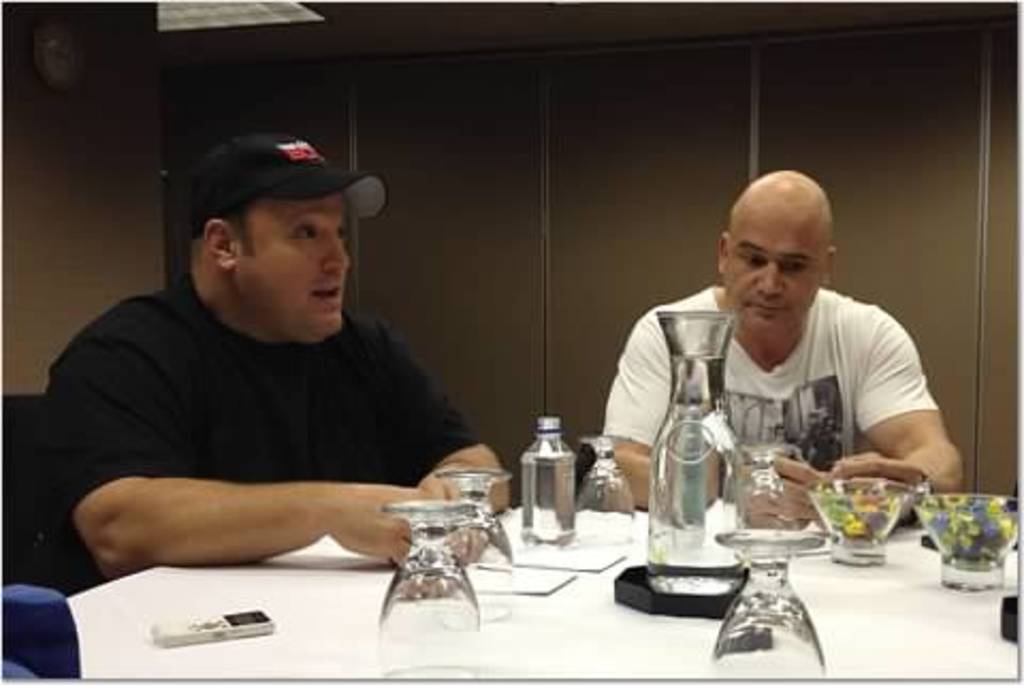 Last week I had the opportunity to chat with Kevin James and Bas Rutten about their new movie, Here Comes the Boom, which opens this Friday, October 12. It was quickly discernible that these two brawny men have some even bigger hearts and an enormous amount of humor and friendship between them.

Rutten, James’ longtime friend and trainer in real life, plays on-screen trainer, Niko. Throughout the movie, there are comedic and yet touching moments that show not just the strength of those in the MMA sport, but also the softer, caring and human side to these fighters. The two joke back and forth, recalling funny moments and laughing as I inquired about their longtime friendship and Rutten adds,

“We’ve been friends over 15 years. I went to his one bedroom apartment that he was sharing with his brother. Quite different now, but he’s the same guy.”

Rutten’s history and class in his part, along with appearances by fighting fixtures, Joe Rogan  and Mark DellaGrotte bring about an authenticity and respectful perspective that was important to James in co-writing the film.  UFC licensing and their endorsement of the film was extremely important in the film, as James adds,

“I didn’t want to let down Bas, because I know he’s a huge figure in MMA and everyone respects him… He’s a legend in the sport, I don’t want to do anything to damage that… With the UFC, They were reluctant in the beginning and I understand why. They didn’t want ‘Paul Blart’ in the octagon… making a mockery of the sport…. I was so grateful that they (UFC) agreed to be a part of it.”

As we continued and talked about education and the good and bad teachers out there, James reflected,

“I gotta say, that I had some great teachers, that inspired me in not only the classes that they taught, but also teaching me to be a good person and some of the principals that they taught me, I follow to this day…You carry these things for life, what these teachers instill in you.”

James’ personal sincerity and humor in real life seem to successfully translate over into the characters and film he helped write. The film has something for everyone to enjoy and doesn’t disappoint. To read more about the film, visit www.boom-movie.com.