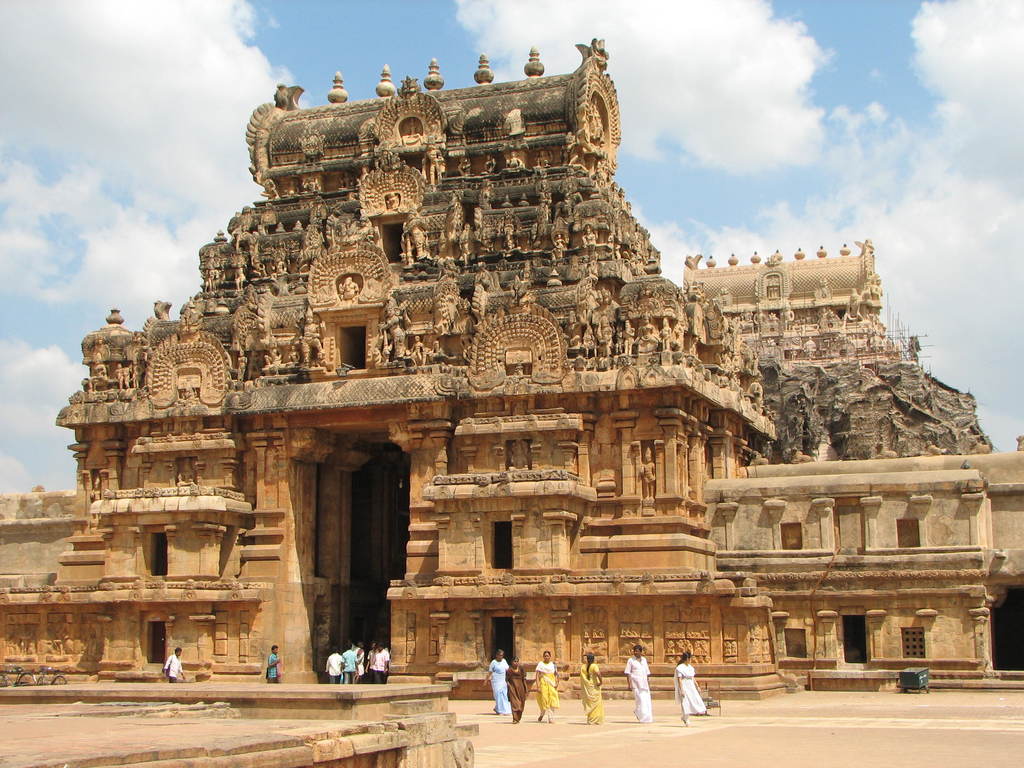 Communing with the Omnipresent: an Interview with Sai Maa 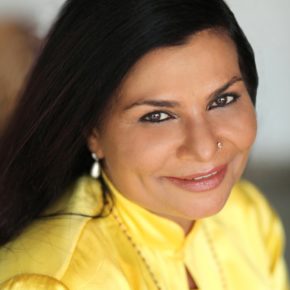 It has taken me nearly three weeks to come back to earth after interviewing Her Holiness Sai Maa. Directly after leaving the hotel where she was staying, I got a text from a friend: did I ask her the question of questions, “What’s the meaning of life?”…I couldn’t remember. Not five minutes before I had been in Maa’s presence, a vivid, surreal adventure, but as in a dream, the details flitted away (luckily I recorded the interview). There was something distinctly Narnian about it. In C.S. Lewis’s masterpiece, the hiding-and-seeking young Pevensies discover the doorway to another world by stepping into an old wardrobe. Magic, wonder, and the shattering of perceived reality ensue. An hour with Sai Maa showed that Her Holiness appears to have stepped through many, many “wardrobes.”

As I arrived in her room in a hotel in Golden where she was staying and giving a workshop, I noticed a beautifully arranged space, with pillows, the scent of incense, and in one corner, an elaborate altar. Among pictures of her guru Sai Baba, there were pictures of Jesus, which surprised me–a fairly ignorant first notion I found out quickly as she holds Jesus in very high esteem and is not limited to any one religion. Then Maa came in. After freezing for half a second, I gave her the greeting I was told was traditional, “Om Jai Jai Sai Maa.” Her delighted reaction instantly showed me that the “serious” box I’d mentally put her was the wrong fit. She gave me a genuine hug with a big smile. I told her I was nervous. She said, “just love me and you won’t be nervous.” As we moved to sit down I said it was interesting to see Jesus on her altar. She laughed, showing her sense of humor, “What, you think Jesus is only for white people?”

I’ll preface this material with a disclaimer: in the west we are given the idea of faith, but rarely the tools to discover it properly for ourselves. Many of the things Maa says are beyond comprehension. Such as, “I am not from this planet, so I see differently. It’s not that I don’t love it. I love the planet it’s exquisite, but I am not of it.” Also, that she sleeps at most forty-five minutes a night, for the last twenty nine years…and where a great preacher may stand at the pulpit and deliver a well-researched, heartfelt sermon, citing passages from whichever holy tome he or she wishes, Sai Maa is the first person I’ve met that claims to have actually been there, directly interfacing with the divine. When asked if she has met the Hindu gods: “All of them. They are my gang, my friends, only one I’m not too friendly with is Brahman,” she says with a smile.

If you are a seeker, then Maa is the treasure at the end of the rainbow. I never did directly ask the meaning of life, but I did ask why we are here…for the sake of experience. We live our lives with our patterns, existing in our perceived three/four dimensions, but there are millions of dimensions in actuality. And as Maa says, “You are all of it, at once but you’re not aware. Imagine that there is a womb. You are in it. It’s called source, it’s called truth, it’s called God, it’s called self. For the sake of experience you know what it is to come out of It. And then what you do you move through these different dimensions, just like a russian doll, so when you are here you have left a print of yourself everywhere. You are a multi-dimensional being.”

— On what is happening right now– “Everything is happening already. Right now we are in a very unique phase, many many huge gateways are opening right now, huge amounts of energy from different planes, different dimensions. All this to prepare the purging. It’s the preparation of the golden age, the preparation of ‘oneness consciousness.’ Naturally people will go through pain. Naturally, because it’s a birth.”

— On faith — Now you have faith in doubts, big faith in fear, big faith in doubt. You don’t have faith in faith. You put all your faith in the big basket of doubt. This is directly quantifiable into physical consequences. We move away from this by first becoming aware that we have entered an era of energy. This body is not solid. It’s energy. The more you bring to your awareness, your consciousness, the greater and higher frequency, the more everything will turn into energy. Everything is energy.

— On Mother Earth — It’s a living being. It breathes. It has chakras. It has leylines like meridians just like your body. The planet was created by the Elohims (great beings of love that have never taken physical form). It was exquisite. What is it? It’s an energy. Energy pulsates. Energy’s alive. At that time [the beginning] it was prepared for beings to come here from different planes. The first golden age, so the energy was very high. And little by little it went down and came back…the cycle.

— On “aliens” — We are being observed by many, many different entities. They come as curious beings. Some are more advanced, some are not. Some are less evolved, and some are more evolved. They travel here from other places. They want to taste what’s here. The difference between beings of planet earth and other planes, there is love here. This changes everything. It originates from earth. Venus was an earth a long time ago. Sanat Kumara brought the energy of love and light constantly until it turned into a devotional planet. And its frequency rose up. It exists today as a realm of light. [I asked how we could observe this as our eyes clearly cannot see it] “If you meditate you can see everything.” 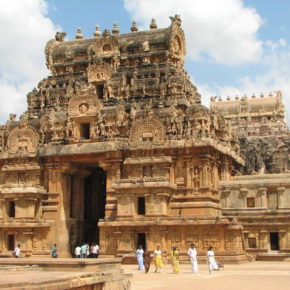 The beauty of India

— On India and Egypt — We should all be looking to go there at some point. It will cause a change in consciousness. India is the only country where thousands of masters have attained a state of godliness. There’s a reason why India has been poor. They could not focus on the material things. They had to focus on spirituality so that they could hold it for the world. Egypt is the other country that will cause a shift in people. It’s a big portal. They are descended from Atlantis.

— On Atlantis and its lesson — When Atlantis was sinking, a spaceship came to save the blueprint of this planet. It sank because it didn’t have “the heart” anymore. They were full of technology, being only in the intellect, not the mind. They were brilliant, but forgot the love. “Today, if you do not stop for a moment to feel love, we’ll be into computers and technology in a split second, and now all the healers are using all kinds of devices. That’s a little bit my concern. If we do not make it past the fifty percent at a point. There will be not enough love and we will disappear again.”

— On her state of being, and her work — [I asked her if she experienced the full range of emotions or was just floating at all times] “Floating no, floating yes. In the body no, in the body yes. I can cry if I see someone is in pain. My blissful state doesn’t change. I can make as if I’m angry at you but my bliss is still right here. To do the work that I do I have to have the firmness with students, clear with disciple, loving […] I am so focused, like a laser. I’ve no time to have emotions. I enter here [snaps fingers], what’s next? And I move. I’m pure love, not ‘I have love.’ I am pure love itself, so I don’t care who loves me, because I am love itself. And my point is to make sure that when I work with someone, they get to love themselves, accept themselves, and realize they’ve always been accepted.”

— On us, and love/fear — There is ONLY YOU. There is only one ‘self.’ Involve, and then evolve. […] Some dare to ask themselves ‘who am I?’ What happens to me when I die? What is making my heart beat? This is called awareness. This is the first step. So now, become aware there are only two energies on planet earth. One is fear. One is love. Unlike in physics where there is no such thing as cold only a lack of heat…fear has it’s own energy. That’s what makes it different. “Everything is about frequency. The whole creation, it’s only frequency, lower frequency, or higher frequency. Let’s say one to a hundred. Fear base is one. Love, pure pure divine love, hundred. In between life exists. Now you have the choice with awareness where you want to be. At one, or at hundred. It’s so simple. Really simple.” 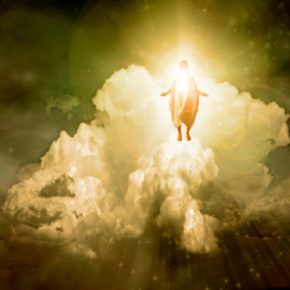 Maa argues with this guy, regularly

— On why we are here, and Jesus — We are here for the sake of evolution. It is our nature, in our blueprint to create, and the divine impulse has begun pushing us to move from being into becoming. “I travel in the whole of creation, there is no God [to my question if there’s a “boss”].” The reason why Jesus said “father.” Jesus has a guru in the Himalayas, whose name is Maitreya. Jesus was a great esoteric master, not a spiritual teacher only, a great esoteric master, meaning alchemy, and he heard the voice inside, the male voice. That’s why he said ‘father.’ “I fight with him every now and then about this because it confuses people. They are afraid of the father, the male figure.”

After sitting with Maa, the world seems a different place. People have asked me if she is crazy– honestly this is a perfectly reasonable response to hearing what she says–but no, to be in her presence was to be engulfed in an energy I have never experienced, a truly holy being. Riding the elevator down from the interview I felt like I was in an altered state of mind, swimming in the divine infinite, awash in the bright afterglow of a heightened consciousness.
If you think it’s all bs, that none of what she said could possibly be real, and I’m a fool for believing it…does this really matter? Perhaps some things are true whether you believe them or not. If we are all inevitably drops in the divine sea of GOD, then like all water we will eventually find our way back to the source. We may spend millennia frozen in ice, drop from a cloud onto a mountain and traverse through the jungle, fall into a river and crash over a waterfall…but in the end, all water eventually arrives at its destination. This world is a playground designed by great beings of love, according to Maa. So…on an intergalactic, multidimensional highway there’s a sign next to this place that says, “Have Fun and Treat Each Other Right.”
Ok. 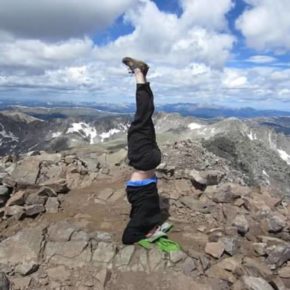 Elliot Riis is a yogi/teacher/banker/ writer who spends his time contemplating the universe and his place in it while trying to maintain a productive role in contemporary society. He can be found regularly twisting himself into deeper and deeper asanas while trying to uncover the answer to that most sacred question…why?