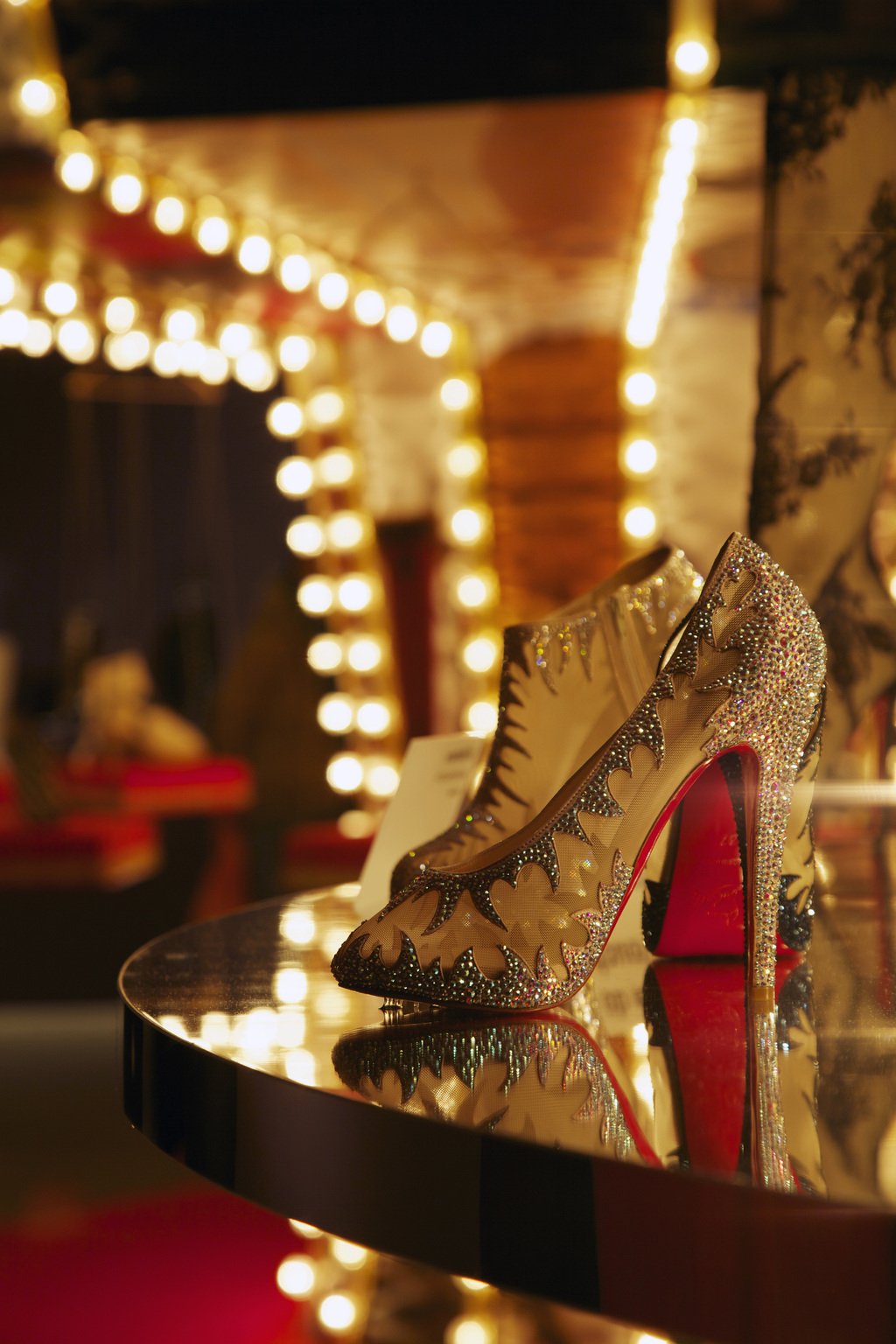 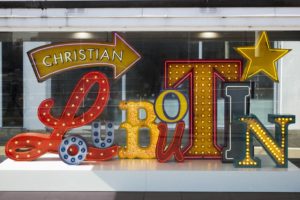 The Design Museum in London, England heralds the Christian Louboutin Exhibition as the most visited in their history.  I was fortunate to visit this retrospective and I will tell you why women, and men, are lining up in droves to experience Christian Louboutin.

Upon entering the Design Museum, I was surprised at the cozy size of the shop, café and ticket desk.  It wasn’t until I reached the staircase leading up to the exhibit that I got a sense of what was in store.  As I climbed, hanging down the center of the spiral staircase, were exquisite shoes, new designs, old designs and designs I’d never seen hung with colorful hoops a la Folies Bergère. 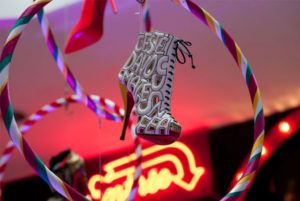 The exhibit is arranged in themes that explore Louboutin’s work and his career.  Louboutin’s iconic script in gold paint translates each theme into words. Captured are parts of his life.  His youth spent as an intern drawing shoes for the showgirls of Folies Bergère, his world-wide travels, infatuation with femininity and sex, his brief foray into garden design and his work with celebrities and socialites.  There is no doubt that Mr. Louboutin’s imagination is here, on display, inviting visitors to experience his world.

A glowing neon “entrée” sign beckons.  I enter, ripe with excitement, anticipation and adventure.  I turn the corner and I find myself in the Shadow Theater. A passage showing three perfect shadow silhouettes of stilettos, lined up side by side in the manner of a chorus line.  A sexy representation of the importance Louboutin places on the shape of his shoes.  I turn another corner and am surrounded by shimmering lights and shoes.  No matter where I look I see shoes, more than 200 pair – and they are all perfection.

“Travel”, the first theme I see is a glass carousel spinning colorful and exotic shoes gracefully on red velvet swings.  Looking closer, the images in the center of the carousel are of Louboutin on some of his many travels.  These particular shoes were the result of people and places that have inspired him around the globe. 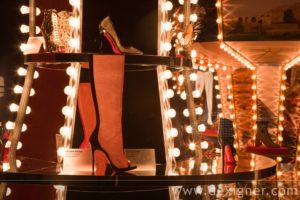 “Transparency” was a look at femininity, skin, and a hint of sex displayed on a towering glass étagère.  Christian Louboutin has a beautiful understanding of women.  This collection of shoes featured lace and satin styles, stilettos with lots of toe cleavage, and fish net fabrications from wearable to only suitable while seated.  Any woman would feel like a siren in the shoes featured here. 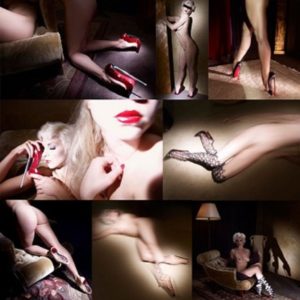 “Fetish Room”, the very back corner was draped with black chiffon, and at first I hesitated thinking it was staff only.  I am so happy I decided to go in.  I have not experienced anything as sexy or sensual outside my bedroom as I did viewing Louboutin’s fetish shoe collection.  Each pair of shoes was on a pedestal under a glass topper.  Each shoe was accompanied by a photograph, shot by David Lynch, featuring a nude model in the shoe; every image was soft and sexy.  This room featured a selection of shoes and photographs from Louboutin’s 2007 Fetish exhibition in Paris.  I admire his way of making sex so sensual and really beautiful.  Despite the fact that none of the shoes I’d just seen I could actually walk in; I still want to own each pair.

“The Atelier”, a true representation of the studio in which Louboutin creates.  Right down to the trapeze that hangs in the corner of his work space, along side a print of Loubi and Dita Von Teese on the trapeze.  The floor is Louboutin red and the wall covering are actual images of the atelier in Paris.  Sleek glass cases line one wall and are filled with all the elements required to produce his exquisite shoes.  A large vitrine filled the center of the room.  It contained sketches, moulds, look books, fashion inspirations, materials, orchids, and of course shoes.

Tucked away in the back corner of the exhibit was a small, dark theater.  An adorable hand drawn animated picture about the life of Louboutin, his youth up to the present day was the first of the short films.  The second, one of my favorite parts of the entire exhibition was a short film that captured Louboutin in a day-dream.  He is thinking of a new pair of shoes, dozes off, and transports the viewers into his dream.  Louboutin is on stage, a cabaret stage; he is flanked by two beautiful dancers wearing towering heels.  The music is charming and très French.  They are dancing, and while they dance, the girls’ shoes change from one beautiful pair to another, over and over again.  Louboutin is twirling and tapping and smiling and we suddenly see his shoes change into a sparking pair of silver rhinestone encrusted oxfords.  The song in the daydream is over and Louboutin awakes.  The final shot is of him leaving his atelier in the rhinestone shoes from the daydream. 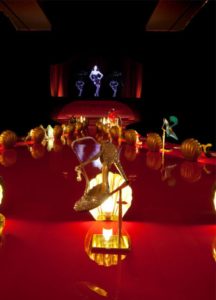 “The Showgirl”, according to Louboutin, “Every girl wants to be a showgirl.”  A gorgeous red topped black lacquer stage with golden shell lights, reminiscent of a Parisian cabaret, display the fanciest shoes.  They were every color of the rainbow and not one pair without embellishment.  Rhinestones, satin rosettes, metal spikes, ostrich feathers, exotic leathers and lots of sparkle.  The whole scene was the backdrop to an amazing holographic burlesque performance by none other than Loubi’s friend and muse, Dita Von Teese.

“Entertainment” is a glimpse into Louboutin’s affection for the silver screen.  Each piece in this collection was a creation Louboutin based on a woman or a character he found inspiring.  The Gilda, named for the film in which Rita Hayworth plays the title character as the ultimate femme fetal and the Pigalle inspired by Shirley MacLaine’s character in the 1963 film Irma la Douce, a razor-sharp call girl.  More recently, Blake Lively told Regis and Kelly on their talk show Live!, that she had visited Christian Louboutin’s atelier in Paris and that every shoe was beautiful.  There was a particular pair, one that she had never seen the like.  Louboutin asked her, “Do you love it”,her reply, “I want to sleep with it under my pillow every night”.  To which he declared, “We’re naming it The Blake then.”   Mr. Louboutin has true appreciation for the female persona. 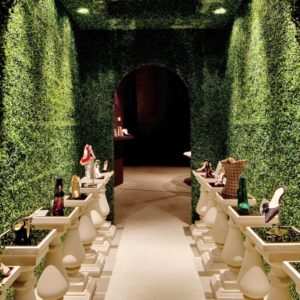 “Architecture” explores Louboutin’s adventures in the 1980’s as a garden designer.  The shoes here are a clearly different.  He has taken a structural direction.  The theme is set up in a hall made of English Boxwood, trimmed to perfection with very straight lines.  The shoes are again placed upon pedestals.  Each pair embodied architectural elements from the patterns of the fabric to the shape and size of the heels.  The rich color and beautiful form were Louboutin.  His departure from the sexy nature of most styles really made them special.

“Handcrafted”, Louboutin believes in producing by hand.  He invests in searching for artisans at the top of their craft to work on his shoes.  The shoes in this collection are truly one of a kind.  My favorite pair was a sleek black stiletto pump with the grill and hood ornament of a Rolls-Royce at the toe.

Each shoe on display is a work of wearable art.  I think these shoes are a true representation of the visionary that is Christian Louboutin.  I appreciate his true genius and feel so fortunate to have experienced this exhibition.  I hope you now have an appreciation for the creative power that is Christian Louboutin.  If you will be in London before the ninth of July make sure to visit the Design Museum.  If you can’t be across the pond, you can own a pair of Louboutin’s, visit the Neiman Marcus Denver Shoe Salon to view the latest collection.

According to Vivienne Westwood, “You have a much better life if you wear impressive clothes.”  As a stylist in the fashion industry for over 10 years, I have found this to be true.  I work with Neiman Marcus Denver, People Stylewatch Magazine, and I am the current Fashion Director for 303 Magazine.