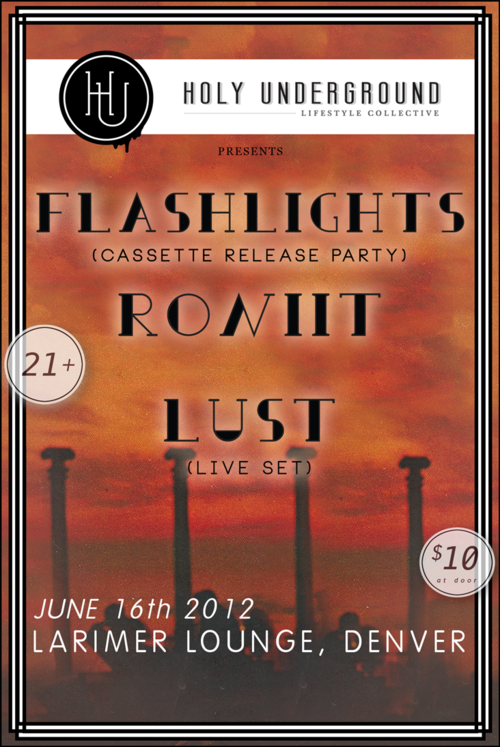 Denver-based indie musicians are no strangers to national recognition, especially with the success of acts like Tennis, The Chain Gang of 1974 and Pictureplane over the last few years. For local dance-pop outfit, Flashlights, it’s only a matter of time before they follow suit.

Tonight, Flashlights celebrates the release of their new album, So Close To Midnight at Larimer Lounge, playing their first headlining show alongside Roniit and LUST. The follow-up to last year’s Hidden Behind Trees EP, So Close To Midnight was released by Denver-based Holy Underground and features a dance-oriented collection of electro pop gems, marking the band’s move towards an evolved, polished sound.

Tonight also marks the first time the band’s new lineup has played together in Denver, with Alex Anderson (ManCub) on production duties and Taylor Thomas on drums. Thomas flew in from Austin to make tonight’s special performance and fans are sure to notice the difference live drumming makes, says lead singer Ethan Converse (also of ManCub).

“The drums add a different intensity,” Converse says. “The drums are electronic so everything synchs to create a bolder sound.”

The band’s experimentation and multi-instrumentalism is what first caught the attention of music fans and critics alike. Their lush, synthy multi-layered melodies and modern nod to Brit/indie pop was timely with the rise of chillwave and glo-fi, allowing the band to earn opening spots for artists such as Toro Y Moi and MillionYoung. Soon after, Flashlights began to attract a growing fanbase with their danceable beats, catchy choruses and mesmerizing light show. Fans can expect swirling, sparkling lighting to paint the walls of Larimer tonight, pulsing and spinning along to Flashlights’ beats and melodies.

To celebrate the release of So Close to Midnight, Flashlights will be selling a limited run of 100 fluorescent pink cassette tapes at the show tonight.

Flashlights will also debut a special remix of a track featured on So Close To Midnight and a new, unreleased song. 303 Magazine got an exclusive listen of the new track, which features edgier beats, catchy lyrics and flawless, sophisticated vocals. If the band’s new material is any indication of what their next album will be like, one thing is for certain: Flashlights’ rise to success will be sooner rather than later.

Tickets to tonight’s show can be purchased at the box office. Doors open at 8 p.m. Show starts at 9 p.m.