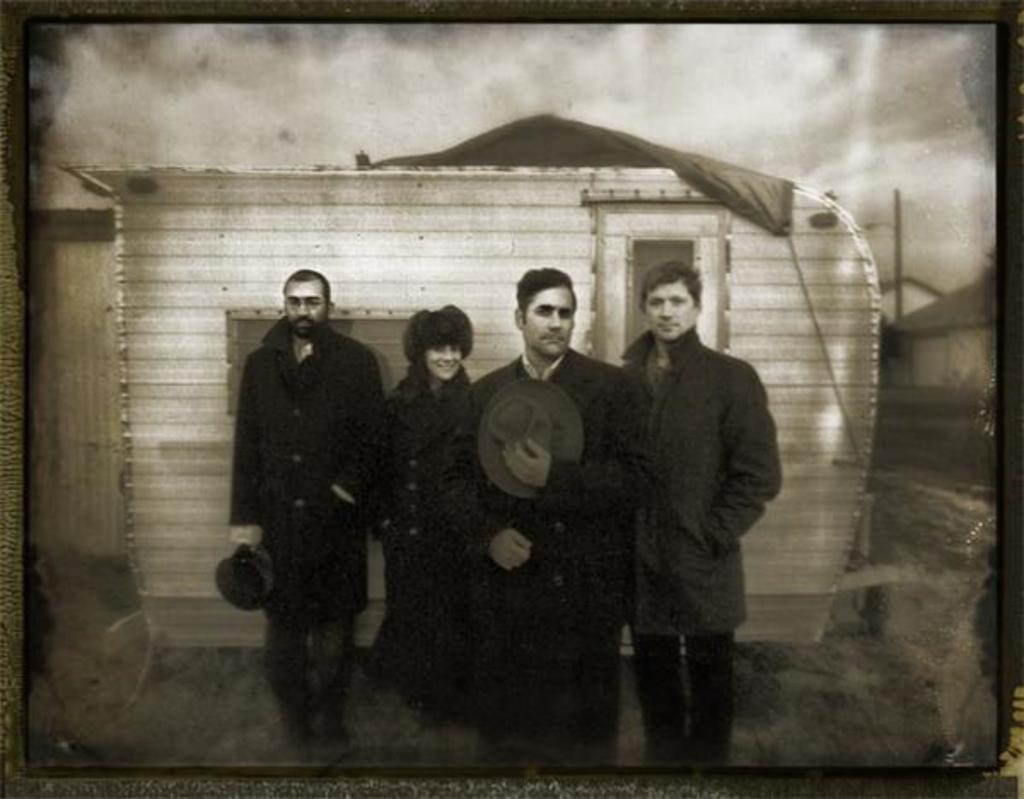 Devotchka and their modest home

I had free tickets to Devotchka’s Valentine’s Day Gala & CD Release Party Saturday night. My date left with flu symptoms sometime between Denver’s Gregory Alan Isakov, and the L.A. based punk/mariachi band, Mariachi El Bronx. I was sober and tired and now, all alone. I was annoyed. It didn’t help that I was surrounded by a cast of Arvadians playing leap frog, high on Miller Lite, a giant unicorn, gleefully decked-out groups of kids that looked like Oliver Twist on acid and all the many picture-snapping, lip-locking, footsie-playing schmucks that filled (and I do mean filled- the place was packed) The Fillmore. It was like Burning Man on a cruise ship, and I couldn’t help but feel like the only gringo at a big Mexican wedding celebration. All these people were going to get drunk and laid. I was going to be walking home. Alone.

I guess I hadn’t been to a Devotchka show in a while, but these people WERE the music. It was as if Devotchka brought along all the spirited gypsies they could squeeze in the tour bus-and I just didn’t fit the part.

Gregory Alan Isakov’s set was lovely. The sounds were clear and loud, and the rich music floated over the crowd like colorful balloons.  I liked it-then again, I still had a date at that point. Mariachi El Bronx riled up the crowd, which had thickened considerably once they started, and forced me out of my spot on the rail. The mix of punk and mariachi could be something of a mess, and on paper sounds like a drinking game where you create new genres of music. But after a few songs, I found the band’s gracious  stage-presence and supreme musical skill charming. It did work after all and seemed a smart fit for the bill. But I still wasn’t in “the mood” after both openers and, because I didn’t feel like spending $10 for one beer,  I was still incredibly sober. After walking around and dodging jugglers and girls with gowns who were swinging each other around, I thought about leaving.

As I headed up the stairs towards the exit, Devotchka took the stage. Slabs of stars sparkled behind the band as they launched into a set of music I was sure they’d put together solely for me. New songs like “The Alley” and “The Man From San Sebastian” mingled with old favorites to create a dazzling act where the crowd, the music and the setting merged into one singular spectacle and kept me; I was a part of this thing, after all. The band has most definitely perfected a sound on their fifth studio album, 100 Lovers, and I bought a copy once the show was over with the money I would’ve used to buy a drink.

And even though I was still walking home alone, I left with a sense of having had “an experience”, which is something you aren’t readily promised at any show. Plus, I had a new CD from an amazing band, a better outlook and I didn’t catch the flu.