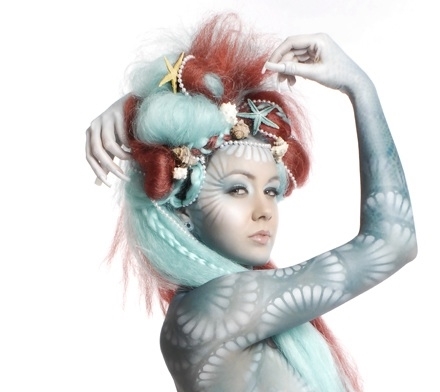 Mermaid: Made in Jonathan Shoup's studio

Tired of being invited to nightclubs by stock photography models who’ll never set foot inside? Beta, arguably the top club in the country, offered a remedy in March when it kicked off a fairytale-inspired promotional campaign featuring bona fide club employees. Novel idea, right? Lauren, one of Beta’s VIP hostesses, played Dorothy for the introductory Wizard of Oz images. I weaseled my way into the part of Scarecrow. And Toto was masterfully channeled by an ankle-biter belonging to photographer Jonathan Shoup’s girlfriend.

Follow me down the rabbit hole–for a peek behind the curtain.

Ms. Easy, Beta’s Entertainment Director, had been eager to organize and style Beta-financed shoots of this magnitude since the club’s opening. Sean Hartgrove, Beta’s primary go-to photographer, had been lobbying just as long or longer. Easy finally got the green light in December and began brainstorming possibilities. Hartgrove was a shoe-in for the job, but Easy and team felt Shoup would be a good fit for the project as well. Shoot number one was scheduled for the end of January. Cinderella, Rapunzel and Dorothy were cast. 11:11’s Denise An was booked to assist with makeup. Costumes were rented and accessories procured. Because Easy and Shoup are two of my closest friends, I was permitted to assist. Picture me in full Scarecrow garb with an industrial-sized fan pointed at Rapunzel’s rump. Torching a broom in the parking garage was another hands down highlight. DJ Fury’s Firm Graphics turned the results into gutter-resistant flyer gold.

I first shook Hans’ hand last June at The LA Coliseum, where he was hired to paint skin for Insomniac’s record-breaking massive Electric Daisy Carnival. If what’s left of my memory serves me correctly, he put a couple finishing touches on my “murder clown” makeup. Beta apparently flew him out in May to airbrush Dubfire’s dancers and a few fairytale tails including “Pocathotness” (Beta dancer Phoenix), a non-Disney-related mermaid (Beta candy girl Alyssa), The White Rabbit (Nate The Average) and Alice–Easy herself.

“I’ve been pushing The Firm for years to have [someone like] Beta use local talent. After seeing all the stock photography they use, it really seemed pertinent that they use the amazing faces & talent right here. Finally, Cathy approached me & said they wanted to try it. I think the fairytale theme was her idea. Working within the theme, I was able to bring in Denise (11:11) for makeup, Vain Salon for some hair, Hans on some airbrush, the Beta staff as models, myself as the everything gal, The Firm for graphics, performers like Nate as actors, & local photographers like Hartgrove & Shoup. It’s a real home grown team.”