FAN EXPO Denver hit the city by storm this past weekend with its first official full-scale event. The convention spanned from July 1 through July 3 with the four days jam-packed full of celebrity appearances, panels, workshops, cosplay and of course, comics galore.

This year’s event was held in collaboration with Pop Culture Classroom with an emphasis on continued educational programming and a portion of the proceeds from the event benefitting the nonprofit organization that promotes literacy, imagination and inclusive communities with the help of pop culture.

The convention started out on day one with a “The Holocaust in Comic Books: Preparing for Colorado Bill HB20-1336” panel hosted by Pop Culture Classroom. The panel explored addressing the Holocaust through the use of comics, how to implement education surrounding the topic and giving resources to potential educators.

As the convention went on throughout the weekend, attendees could participate in panels such as a “Heroes and Villians of Colorado’s History” panel hosted by History Colorado that gave examples of parallels between historical figures in Colorado and characters in comic series and a “Pulp Heroes and Their Influence on Today’s Comics” panel hosted by Denver Public Library that gave insight into the inspiration of many popular comic book heroes that were maybe not so original.

Fan Expo Denver 2022 also offered a number of Q&A’s with celebrities held in the Main Events Four Seasons Ballroom. Convention-goers billowed into the venue for each Q&A session to hear from their favorite celebrity about their experience in acting, their favorite roles and possible upcoming projects. 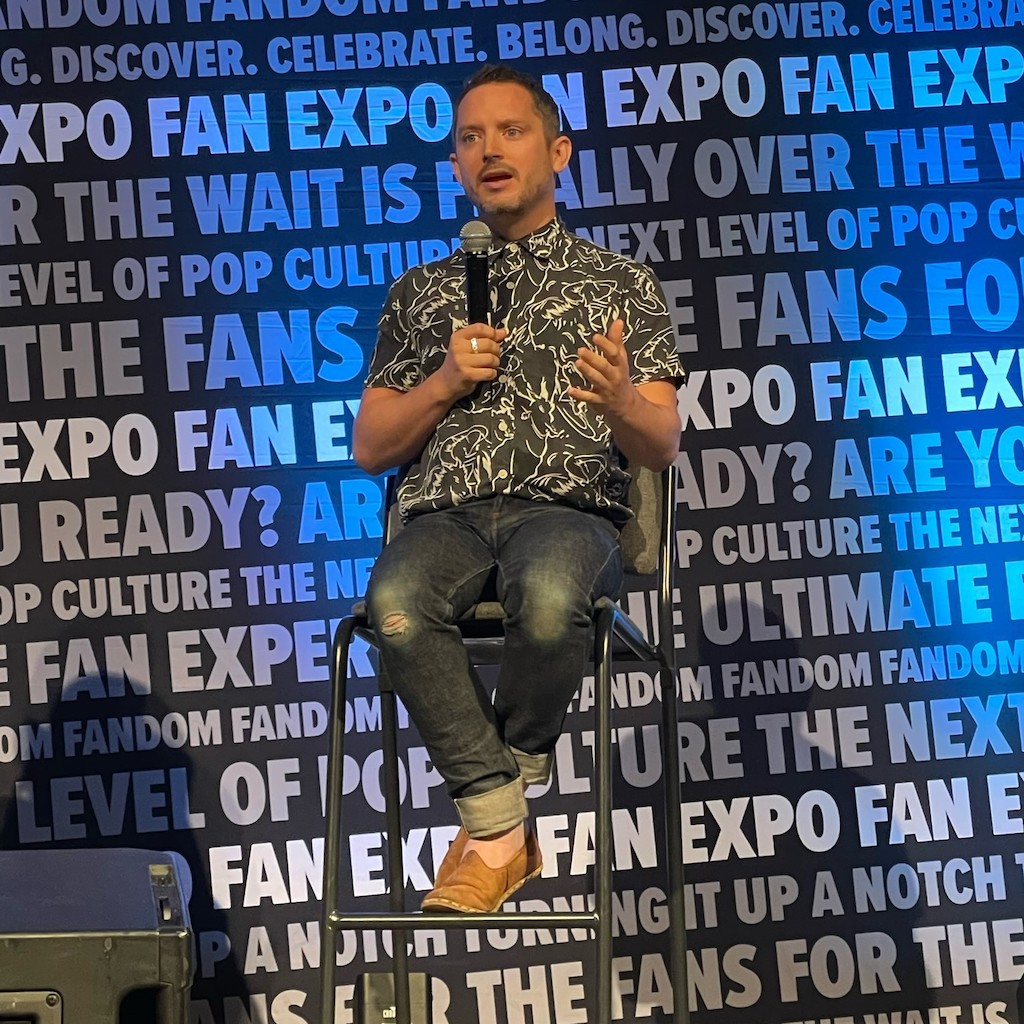 On Sunday, Elijah Wood, greatly known for his roles in the Lord of the Rings series, Radio Flyer and the television series Wilfred, spoke about being pressured into playing League of Legends with the three other hobbits (Dominic Monaghan, Billy Boyd and Sean Astin), making time to reconnect with castmates and the challenges of shooting the Lord of The Rings Trilogy all out of order. Wood also spoke about fan’s wild fanfiction and working with Andy Serkis.

“He (Andy Serkis) really took [the role] on board. And my understanding is that Andy was hired to voice the character. It wasn’t necessarily the Herculean sort of incredible performance that he ultimately gave them. I don’t know that those were, those were the expectations laid upon him initially. It was something that really revealed itself with the course of the experience and obviously in subsequent films and certainly with The Hobbit as well, the technology got so much better and the notion of genuine motion capturing became a thing. And he became the sort of expert defacto because he was a real trailblazer in the mix of people literally doing that for the first time,” explained Woods. 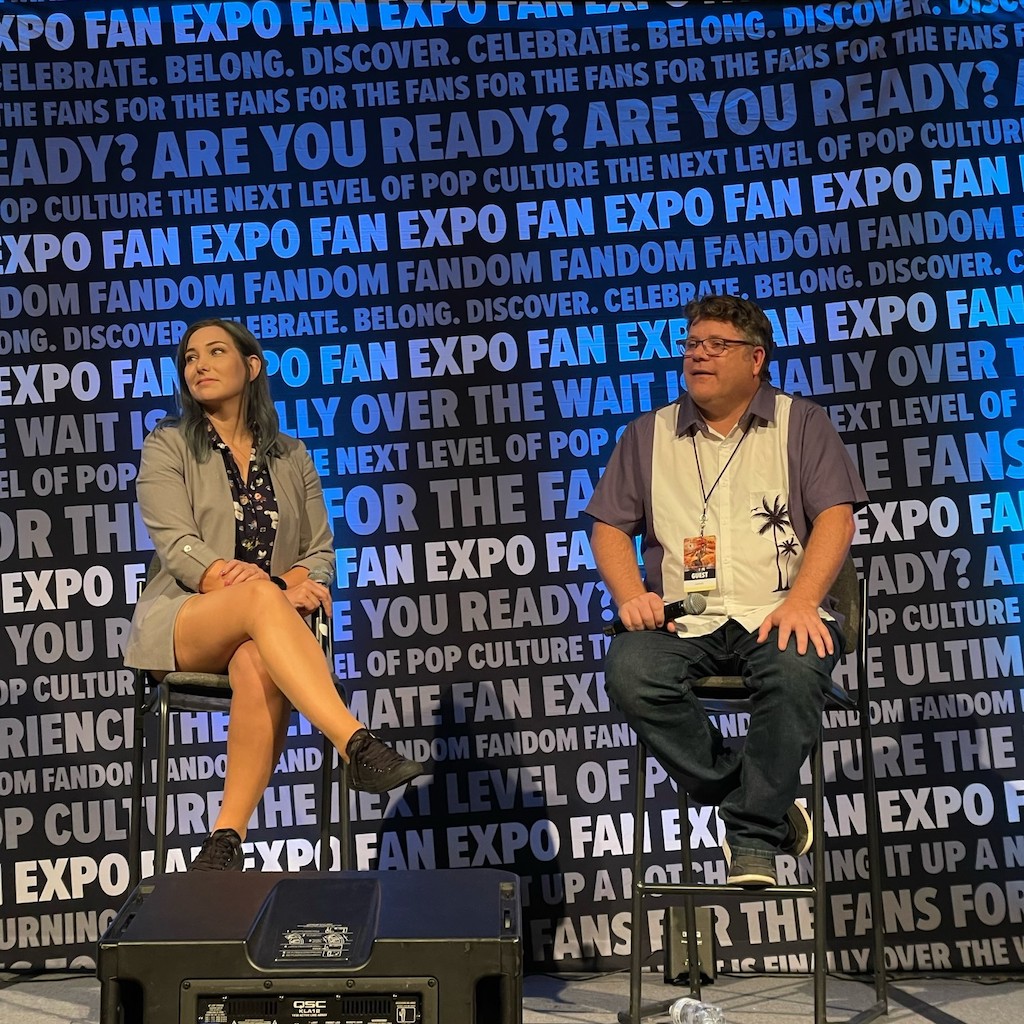 Later on the last day of the FAN EXPO 2022, Sean Astin took the stage of the Four Seasons Ballroom and gave attendees an all-out giggle fest. Astin began the panel with two of his daughters on Facetime, having the crowd say hello to both of them. Astin then dove into tales of kissing castmates, confronting fears of both being the underdog and being a winner and worries of saying the wrong thing after his family warned him not to.

Astin then explained to the crowd his best on-set chemistry (who just so happened to be his own mother), roles that he missed out on and ended with a praising of Denver’s con-goers.

“You guys, I have to say I’m really tired right now. And the reason I’m really tired right now is [that], for the last three days, the people of Denver have just been overwhelming. So many autographs, so many pictures, so many people at the thing. And it is incredibly flattering to have people come out and spend time with you. I’ve decided that Denverites are actually a precious metal. And if you know where to go to find them, you can get one and keep it for yourself. So I now have enjoyed a couple of hundred Denverites and I’m going to make a mural at home. Thank you all,” stated Astin.

Kevin Smith of Clerks and Jay and Silent Bob made an appearance at the convention giving fans the chance of meeting the comedic genius in person. Smith spoke about his ongoing journey in the comedy world, his podcasting network Smodcast Network and his love of conventions.

Smith also gave high praises to fans stating, “It has been absolutely delightful. I have met so many people who share their stories with me. It is absolute magic. It is a currency that spends like no other and one I never imagined when I started this job. It is having people tell you that Mallrats of all movies is the movie that saved their lives. And that is worth the trip alone. I love doing these cons,” exclaimed Smith.

Vendors from all across Colorado and the nation traveled to the Colorado Convention Center to sell their artistry, books, lightsabers and more all situated in the Merchant Mesa. The hall hosted an Artist Alley with a chance to purchase art created by local and national artists in all sorts of mediums. Attendees could also explore an Author Alley with authors presenting their original novels, offering signings and a chance to get some brand new literature exposure from the norm.

This year you could shop from booths such as Gifford Gaming which offered handcrafted leather items, the Chalk Twins who sold original chalk art and created a giant The Witcher-themed piece live at the convention for a silent auction and Puppet Me This with a bright array of wondrous puppets. Cap For Kids – the nonprofit organization that supports and raises funds for families with children who are going through cancer treatments – once again was stationed at the con, this time with an even bigger booth for a greater impact.

This year cosplayers showed up and showed out with wild and fantastic cosplays for all to see for FAN EXPO Denver. Many cosplayers attended each day in a different cosplay, making their efforts even more worthwhile.

Pop Culture Classroom continued its educational and fun programming in the Kids Lab section of the convention. The organization had wide a range of workshops for all ages, from children to adults, and from all genres of pop culture media. Con-goers were able to learn about film creation, play with props and act as stuntmen to live out their wildest action-packed dreams.

Overall, Fan Expo Denver 2022 made its mark on the Mile High City. Comic fans, cosplayers and con-goers alike are already planning for next year and thrilled to see what Fan Expo Denver has ready for the future.

Photography by Kiddest Metaferia and FAN EXPO Denver on Facebook.