There is no shortage of running groups in Denver. Around the city, there are groups for beer drinkers, dog walkers, curious children, art enthusiasts and, of course, serious runners training for upcoming races like the Colfax Marathon or a local Turkey Trot.

At every park corner and local track, it can be almost guaranteed that a group of runners will gather in sports sunglasses, technical tanktops and too-short shorts. Achilles Denver, however, is a running group unlike any of Denver’s others, though its members are most certainly serious runners.

Achilles Denver is a chapter of the Achilles International organization, a global organization dedicated to creating athletic and social opportunities for runners and athletes who live with disabilities.

In Denver, the group meets at the recreation center in Washington Park every Monday night at 6 p.m. Even in 95-degree weather, the group gathers for their weekly run with smiles on their faces. 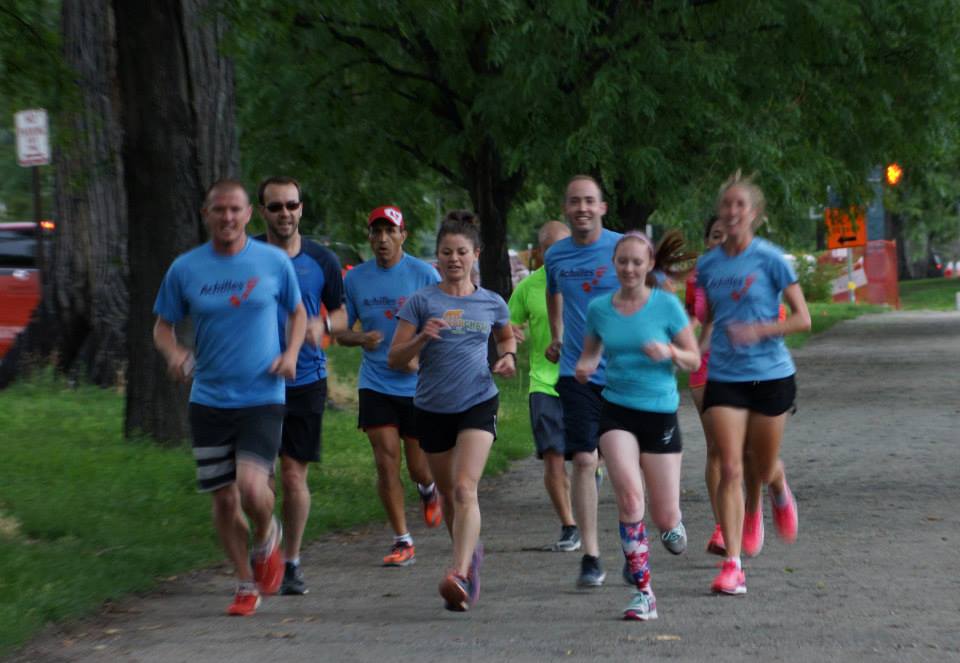 “When you have a disability, it can be really hard to run on your own and find people to run with. The group helped me find friends, some of my closest friends,” Amelia Dickerson, one of the group’s two leaders, said, with her dog Lotus by her side. Dickerson struggled to find a running community that worked for her prior to hearing about Achilles through friends and word of mouth. After learning about the group, she joined the organization and never looked back.

Achilles International operates 70 chapters worldwide, including in 18 countries and 19 U.S. states. In total, over 150,000 athletes have been a part of Achilles International since its creation in 1983. Today, that number continues to grow as the group strives to empower everyone through exercise and social connection.

At the local chapters, the organization pairs its athletes with volunteers who assist, motivate and guide athletes with visual or hearing impairments. Many of the volunteers are avid runners themselves, and some of them are family members or close friends of the athletes. 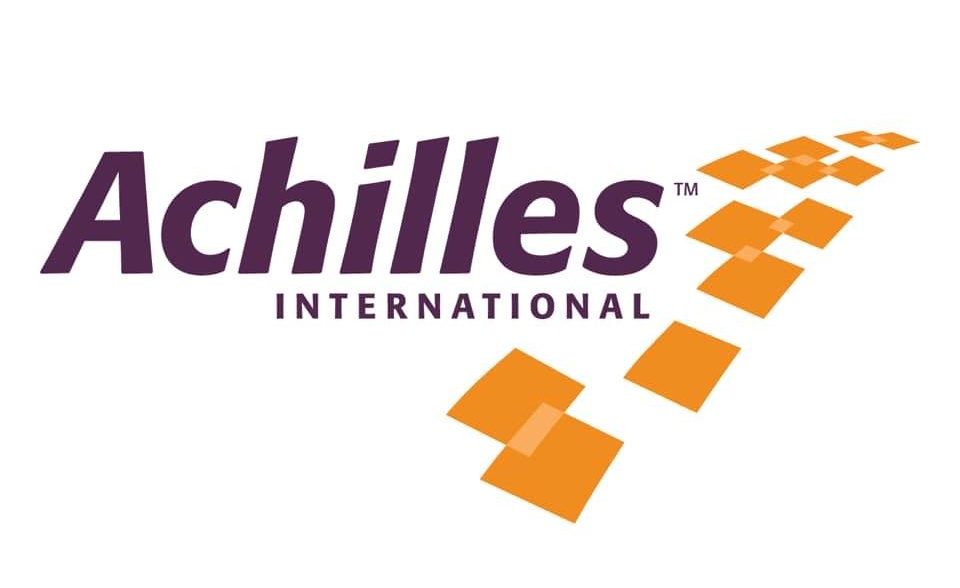 In Colorado, the Denver chapter started in 2007 and chapters also operate in Boulder and Colorado Springs. Dickerson took over as a leader of the Denver branch in 2013.

On a hot summer night, the weekly meeting draws about 15 participants, but the group has had over 70 members show up for past runs.

In addition to weekly runs, the Denver chapter regularly participates as a group in local races like the BolderBOULDER, Colfax Marathon and Bunny Bolt 5K/10K. Many of their athletes also compete in races in Colorado and around the country. The group, however, is about more than just running.

Naomi, one of the athletes, has run with Achilles Denver for four years, though she’s been a runner for over 10 years after starting the sport in 8th grade. This month, she celebrated her 24th birthday.

“Almost everyone [from the group] came out for the birthday party,” she said. For her, the friends she’s made at Achilles Denver are the best part. Naomi has a cognitive disability, but that has never stopped her from pursuing her love for running and the community it provides, even after graduating from high school running.

“She’s an old hat at this,” joked Naomi’s brother.

“I like it here because everyone is so nice and supportive. They’re all really welcoming,” said another athlete, Francesca, who recently struggled with an injury and has been working back into the groove of running.

Dickerson agrees. “It’s a great group. Once a month in the summer, we have a bonfire. Everyone comes to talk and pick out songs and have a blast,” she said. These monthly summertime gatherings are some of her favorite memories during her years with Achilles.

Before the group starts their run, they gather together in front of the Washington Park Recreation Center to pose for a photo. They laugh and chat about their plans for the evening run as a group of both friends and athletes. 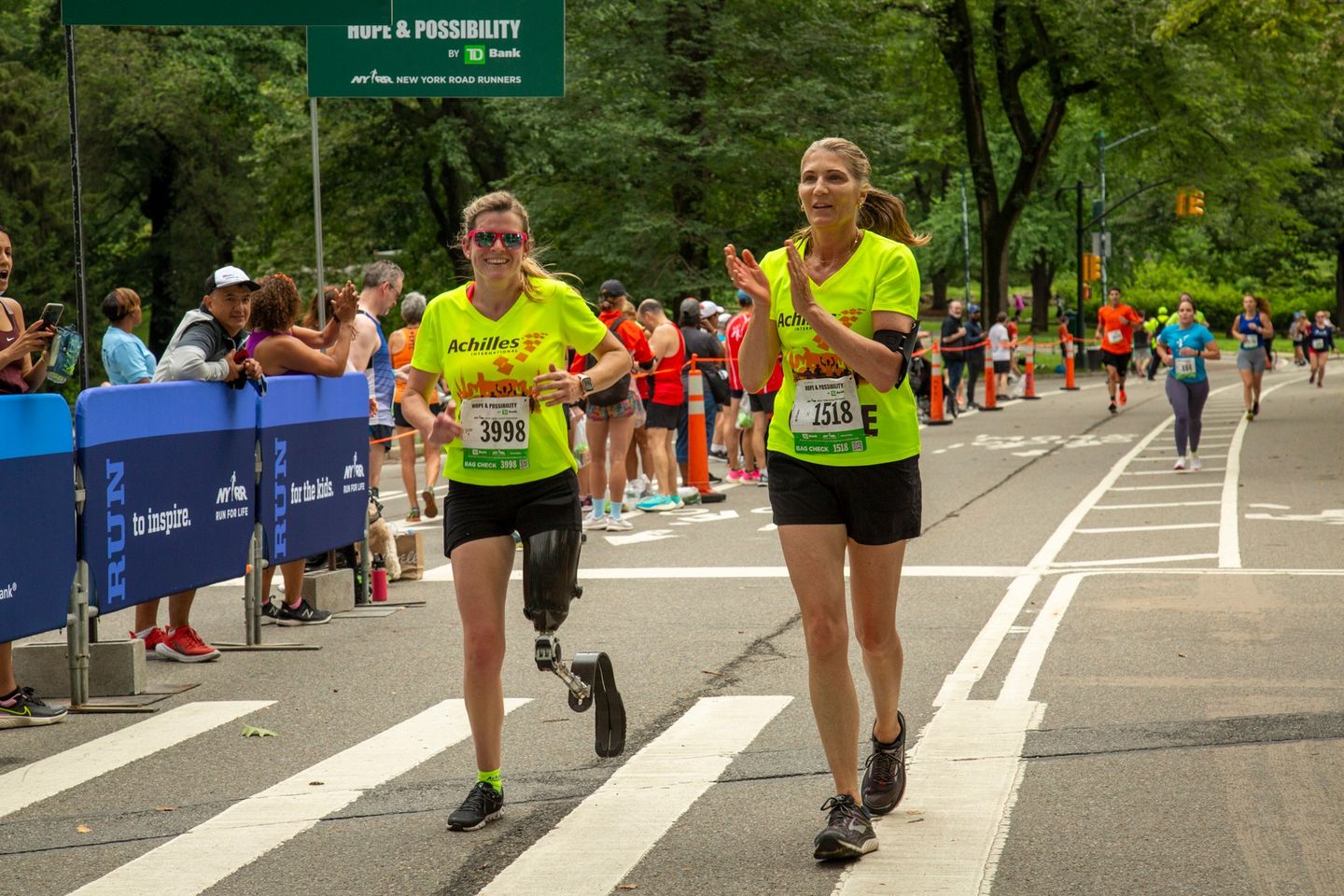