Premiere – Neoma’s “Hyperreal” Is Caught Between Dreams and Technology, Love and Contemplation

Although Neoma exploded onto Denver’s music scene just a few years ago with her 2019 debut album, Real, today’s world seems drastically removed from her fruitful first year in the Mile High City. Separated from those early days of her career by a devastating global pandemic, two years of canceled tour dates and unobtainable longing for human connection, Carla Huiracocha – better known as the bilingual electro-pop star, Neoma – is shaking up Denver’s music scene once again with a triumphant, experimental electro-pop album, Hyperreal. Drenched in industrial production and disco aesthetics that call back to ABBA’s glory days, Hyperreal is a dense followup to Neoma’s first full-length LP, sown together with narratives of virtual relationships, powerful femininity and the complications of modern love. 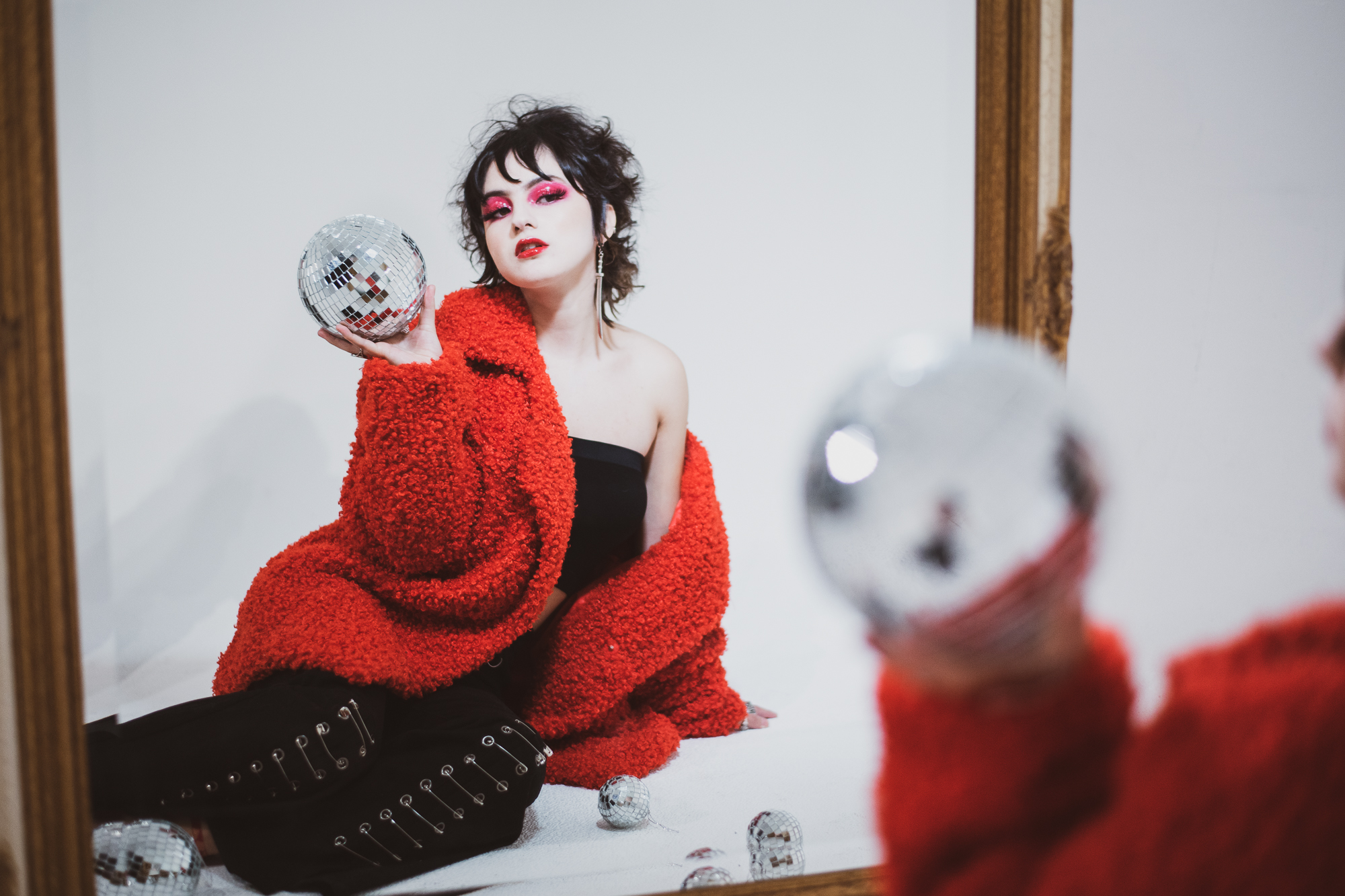 As is often the case, the inspiration for Hyperreal wasn’t a carefully crafted strategy meant to provoke Neoma to the next level in her career. Instead, a spark of creativity shook her awake in the middle of the night. Thankfully, she took off running.

“I wasn’t planning on making an album,” Neoma said, glowing in the light of a lone window illuminating her home studio bordering Capitol Hill during an exclusive interview with 303 Magazine. Wide awake with creative jitters, Neoma was unable to contain her frantic excitement when she opened her eyes and remembered that her partner and producer, Danny Pauta, was lying next to her.

“It was after the pandemic hit, after our tour got canceled. I remember I woke Danny up in the middle of the night and I was like, ‘hey, I think that I wanna make an album,’ and I told him about the whole concept. I was able to capture that whole vision there, which I’m so surprised by.” 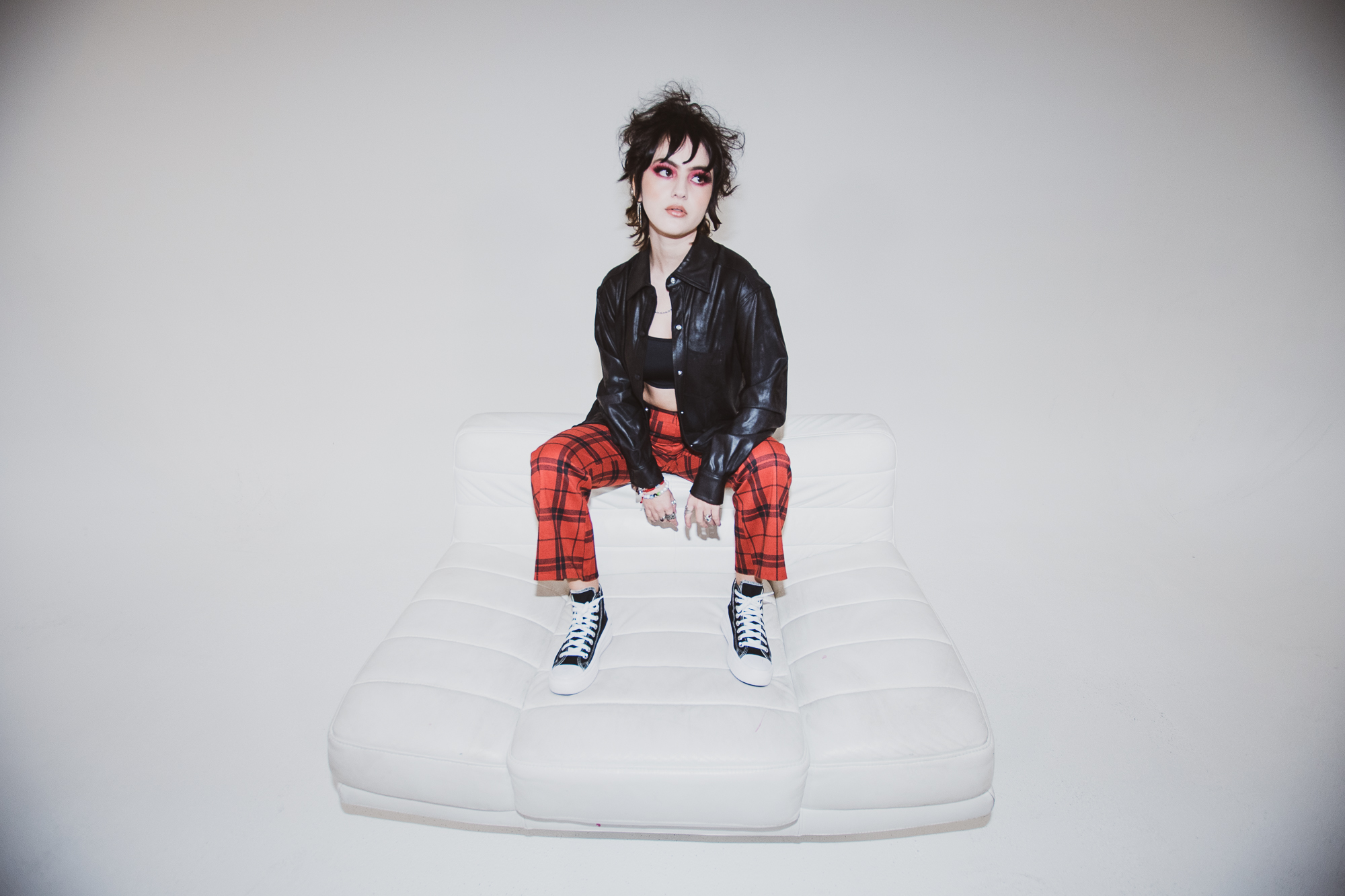 Inspired by pandemic loneliness and half-baked, inauthentic virtual relationships, Hyperreal creative concept practically wrote itself. Though at first, the vision for Neoma’s sophomore album wasn’t an obvious sequel to Real. One day, after shaving her head and rejoicing in the sounds of Lorde’s “Buzzcut Season,” a feeling of empowerment swept over her as the lines “make-believe it’s hyperreal” rang out. At that moment, Hyperreal was officially born.

Feminine energy and empowerment are written all over Hyperreal. In fact, the sonic influences that steered the sound and lyrics of the project were almost entirely driven by creative women including ABBA, FKA Twigs, 070 Shake and Donna Summer. From the opening lyrics of the eerie first track, “Condena,” to the final lines on synth-forward, alt-rock inspired closer “Go With the Flow,” which sounds straight out of Willow Smith’s catalog, the message is clear – patriarchy is out of style.

“The opening track, ‘Condena,’ talks about how hard it is to be a woman in a man’s world and how it almost feels like we are condemned and oppressed just for being born woman or being born queer. The feminine energy is all over this album because it talks about following my instincts but also following my heart. There are all these crazy things that society tells me that I need to do and that I need to pursue. [Hyperreal] is me going against those things.” 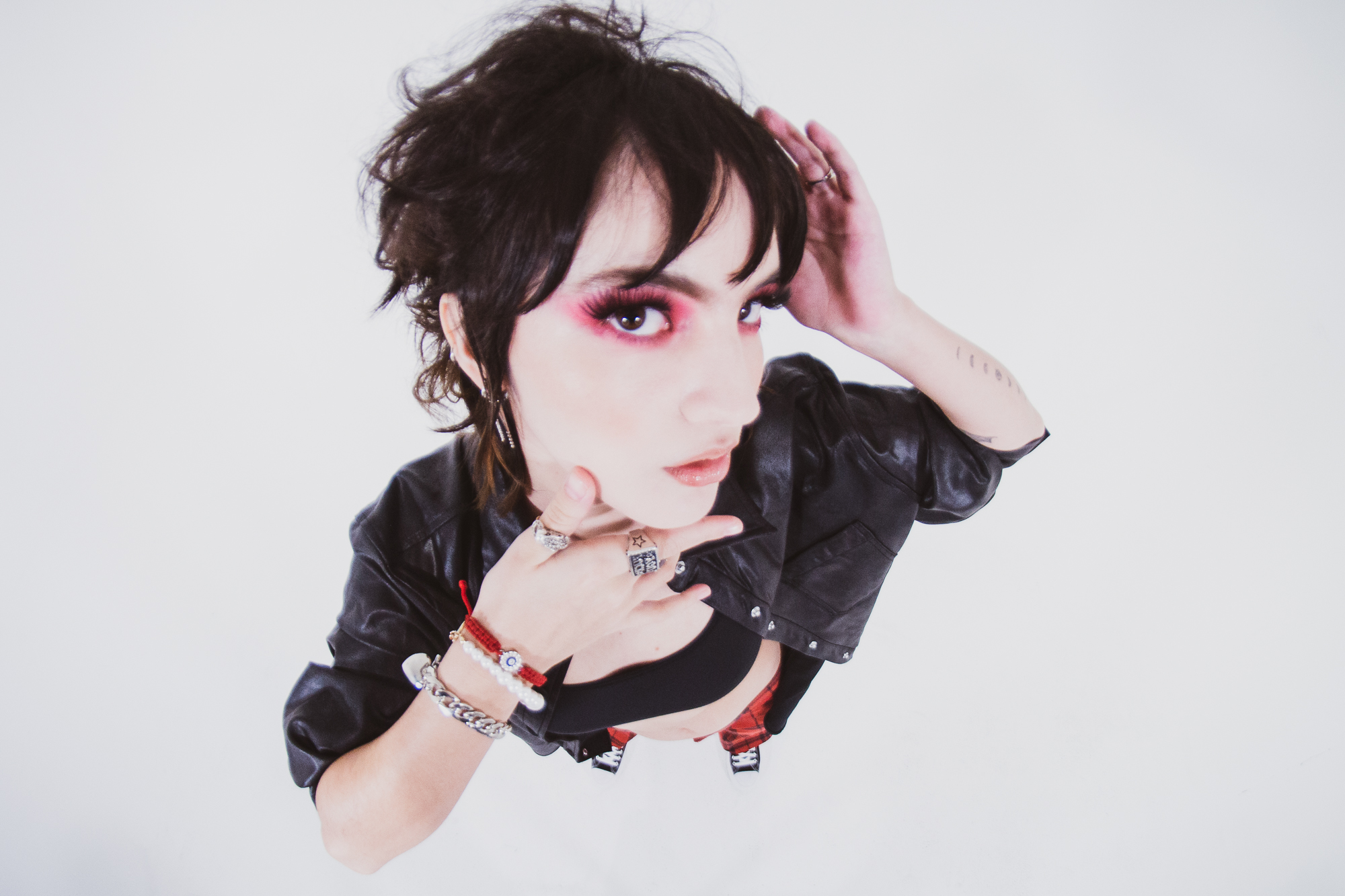 Neoma has been going against the grain her entire life. Born in Ecuador and raised in a matriarchal household, her mother knew the struggles awaiting her fierce daughter with big dreams.

But sometimes it’s just easier to fall in line, take whatever place society tells you and hold your tongue. Especially when ambitious women are made out to be pushy for their take-no-shit attitude that challenges men’s societal authority. According to Neoma, the U.S. has a higher tolerance for women’s ambitions and creative aspirations than Ecuador does, which is precisely why she decided to move away from her home country.

“In Ecuador, I started to feel like the people I was surrounded by were just doing the same things, doing what their parents told them. They were living in a closed-minded society. But I was always thinking outside of the box. I wanted to be an artist. I wanted to dye my hair. I wanted to dress differently. So people would always look at me and be like, ‘why are you like that?’ and my family would question everything, like how I looked and why I wanted to pursue music. I thought that maybe if I moved away from there, I would be able to be the person I wanted to be.”

And that’s exactly what she did. 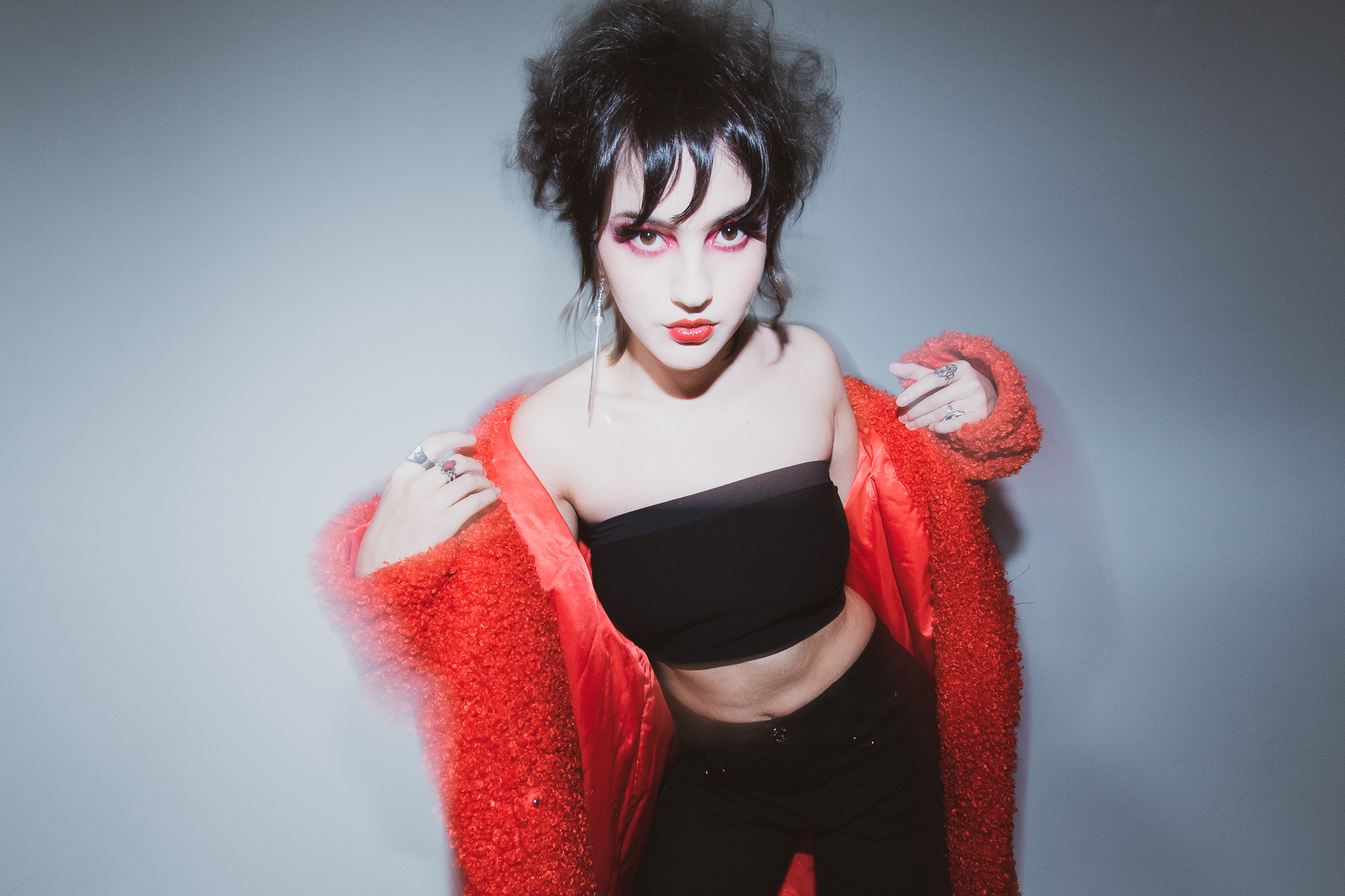 Building a new fan base from scratch is no easy task, but Neoma was up to the challenge. She’d already topped the charts in her home country and sold-out shows at Ecuador’s biggest venues. But that wasn’t enough. Neoma bucks back against complacency, always planning her next move, thinking of ways to engage with her fans and provide new and exciting experiences for her audience to enjoy. After a show-stopping performance at 2019’s Underground Music Showcase (UMS), people started to notice Denver’s bright new star.

Nowadays, Neoma needs no introduction. She’s played at Denver’s most iconic venues like Mission Ballroom and Summit Music Hall, where fans routinely line up to buy her merch and signed CDs after witnessing her on-stage charisma during opening performances for acts like The Marías, Big Wild and Marc Rebillet.

While the vast majority of Neoma’s songs are written by Huiracocha, she made it very clear that the magic we witness on stage is a byproduct of her band. Made up of Levi Double U (keys), Danny Pauta (bass) and Aaron Wey (guitar), Neoma’s band was formed shortly after releasing Real, which was written, produced and recorded solely by Huiracocha and Pauta.

“Danny and I make a good two-person team, but having a band there to take some of the responsibilities from us is so much better. Danny was producing and mixing everything for the first album. Now we have Levi. I was recording almost everything for the first album. Now we have Aaron who records guitars and synths. And I also had to teach myself how to produce because I felt like Danny was doing everything and I was just writing songs, not knowing how to explain to him the sounds I wanted or the vibe I wanted to capture for those songs. The band has made a huge impact on how fast we work.” 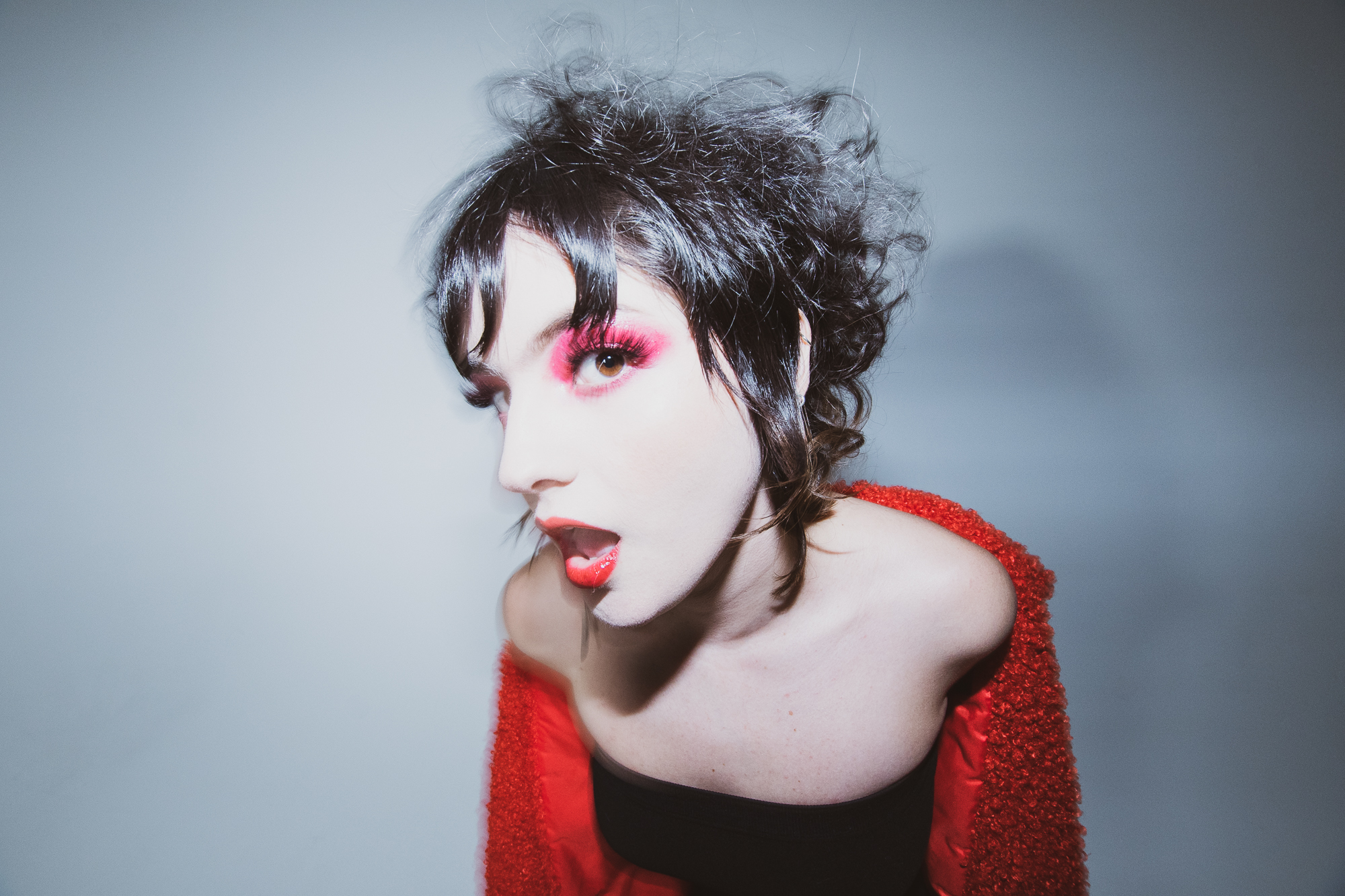 This change of pace is definitely felt on Hyperreal. The sound is dense, much grander in scope and vision, a byproduct of the creative collective that is Neoma’s band. Innovative production choices like the industrial sound design led by clanking bottles on “Say You Love Me” and the deep synth, alt-rock combo on “Go With the Flow” might not have been implemented if it weren’t for Levi and Aaron’s forward-thinking production.

More importantly, though, Neoma needed a space to express herself in every aspect of Hyperreal‘s saturated, industrial ambiance. Considering the love-struck, contemplative narrative of the project, establishing a safe creative space was crucial for Hyperreal’s execution. Thankfully, Pauta encouragedHuiracocha to dive deep and be completely honest in her perspective of love, loss and crisis during their recording process.

“I feel like my relationship [with Pauta] has grown because he allows me to talk about those things and he creates a safe space to record them. It’s hard to record things about your feelings, about being heartbroken or just disappointed. You also have to sing them and then listen to them over and over, so I appreciate him creating that space for me and being so open to my ideas too. He doesn’t get mad if I don’t make a song about him.” 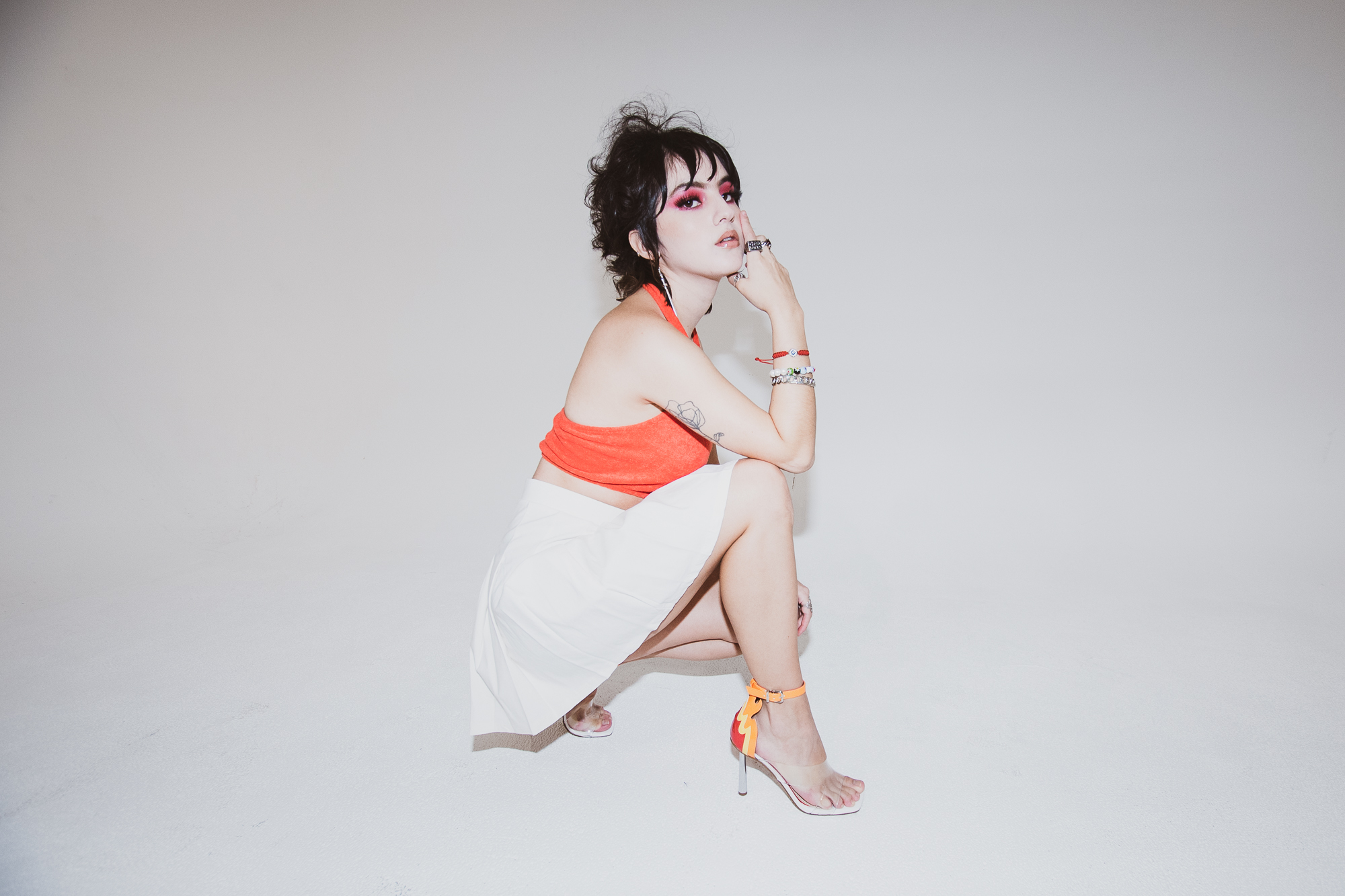 It goes deeper than that. Although most of the songs on Hyperreal aren’t directly about Huiracocha and Pauta’s relationship, the subject material is inspired by the trials and tribulations of “modern love,” a complicated minefield littered with outdated societal norms and unrealistic expectations, something Neoma talks about in detail on “Say You Love Me” and “Losing You,” which was directly inspired by a 24-hour listening session of ABBA’s dense catalog.

“I think we usually have this monogamous dynamic because we have our attachments. We don’t wanna lose a special person for someone else. There’s a lot of pride that comes with that, but it’s important to have a conversation with your partner about those things… For me, modern love is about going away from those old, closed-minded mentalities and statuses and instead focusing on healing and communication, trying new things, failing and learning.”

This mentality extends beyond her relationship with modern love. Her “try and learn” attitude is directly reflected in creative sound experiments scattered throughout Hyperreal. Take “Nada,” for example, an autotune dream-pop banger drenched in 808s that sees Neoma expressing her disappointment in a wasted relationship as candy-colored clouds rain down on her growing distaste for a failed romance. 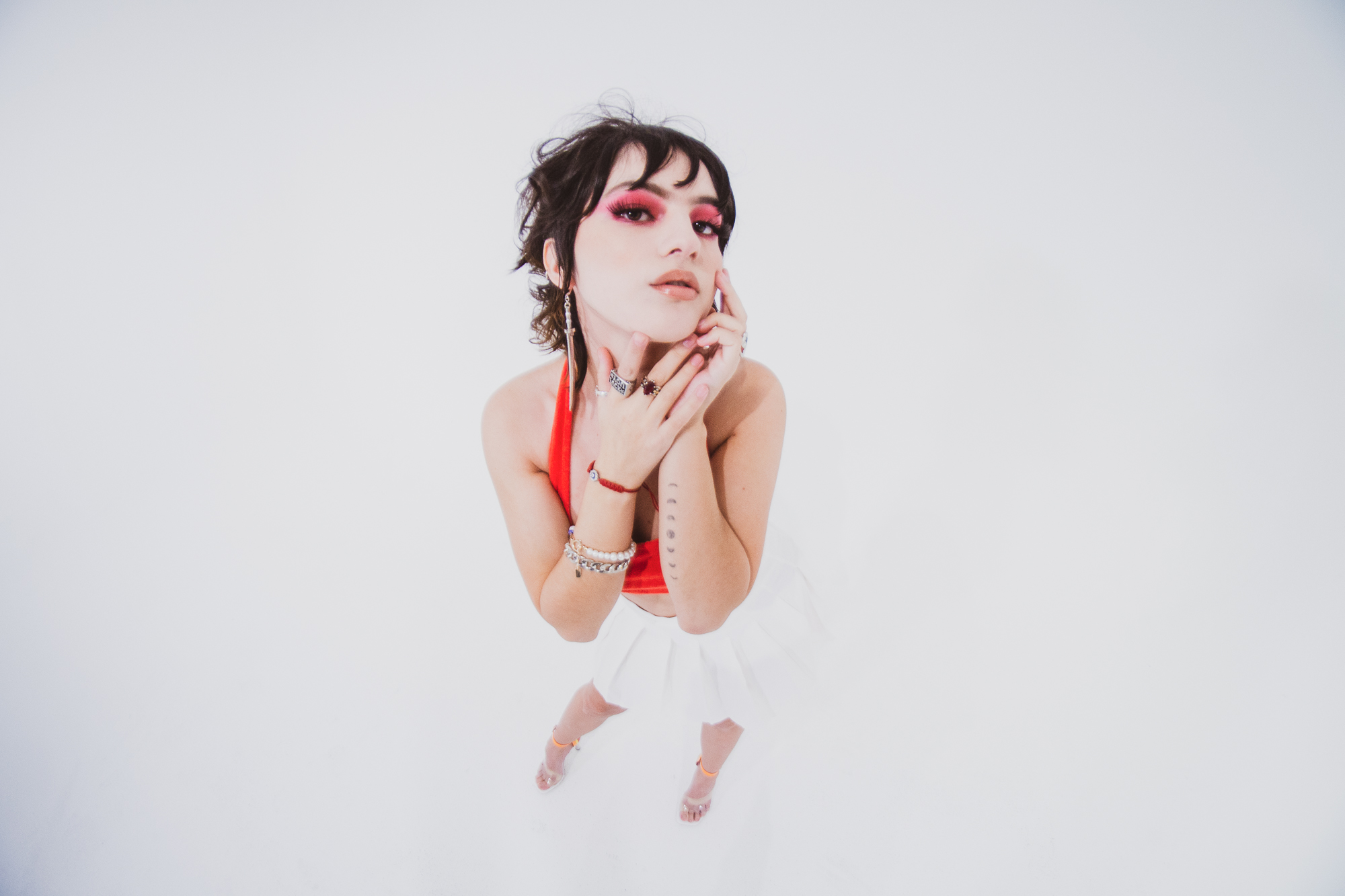 The left-field production doesn’t stop there. Songs like “Muse” and “CTRL V” pop with an electronic ambiance that embraces the aesthetic of modern genre-benders like FKA Twigs and 070 Shake. Although these tracks stray away from traditional production, they have a distinct and proper place in the overall atmosphere of Hyperreal, which is simultaneously grounded and unhinged, futuristic and nostalgic, wild and practical.

The themes of Hyperreal exist in a world caught between dreams and technology, love and contemplation. Neoma is questioning her place in this new world, where virtual existence is a byproduct of everyday life while modern love seems lost to the possessive tendencies of human nature. Thankfully, Neoma refuses to bend to society’s will, and her music represents the spirit of powerful femininity and unbound creativity. She’s come a long way from her first few years of fame in Ecuador, and she’s just getting started.

Make sure to catch her show at Ophelia’s on April 30, and listen to Hyperreal here while she celebrates her success on the Hyperreal tour through America, Columbia and Ecuador.