If art is a battlefield, then Denver-based artist Amy Lummus is a soldier and her brush is the gun. Lummus’ fight is for women’s safety, but don’t misunderstand: she is no martyr, nor does she need to be.

Lummus says that while gender equality has made significant strides, the idea that a “good woman” is a martyr – one who sacrifices for image, materials, children or a man – remains intact.

“Mettle Martyr is a battle for feminine safety, and I say battle because I think that as an artist, there’s a two-pronged approach: you can make beautiful things and you can make money making beautiful things and commemorating beauty, and that’s okay, if that’s okay with you,” Lummus said. “It is not okay with me. I’m making battle things, baby. I want to say something.”

Circling back to her first love of portraiture, Lummus uses acrylic, colored pencil and an alcohol marker to create her monochromatic images of women in the 50s and 60s. The images are void of any dramatic coloring to allow viewers to react authentically to the message of each piece and to create “an everywoman situation” by being racially inclusive, she says.

The images are paired with a statistic that gives insight into the female experience, alongside a “stupid, dirty joke.” 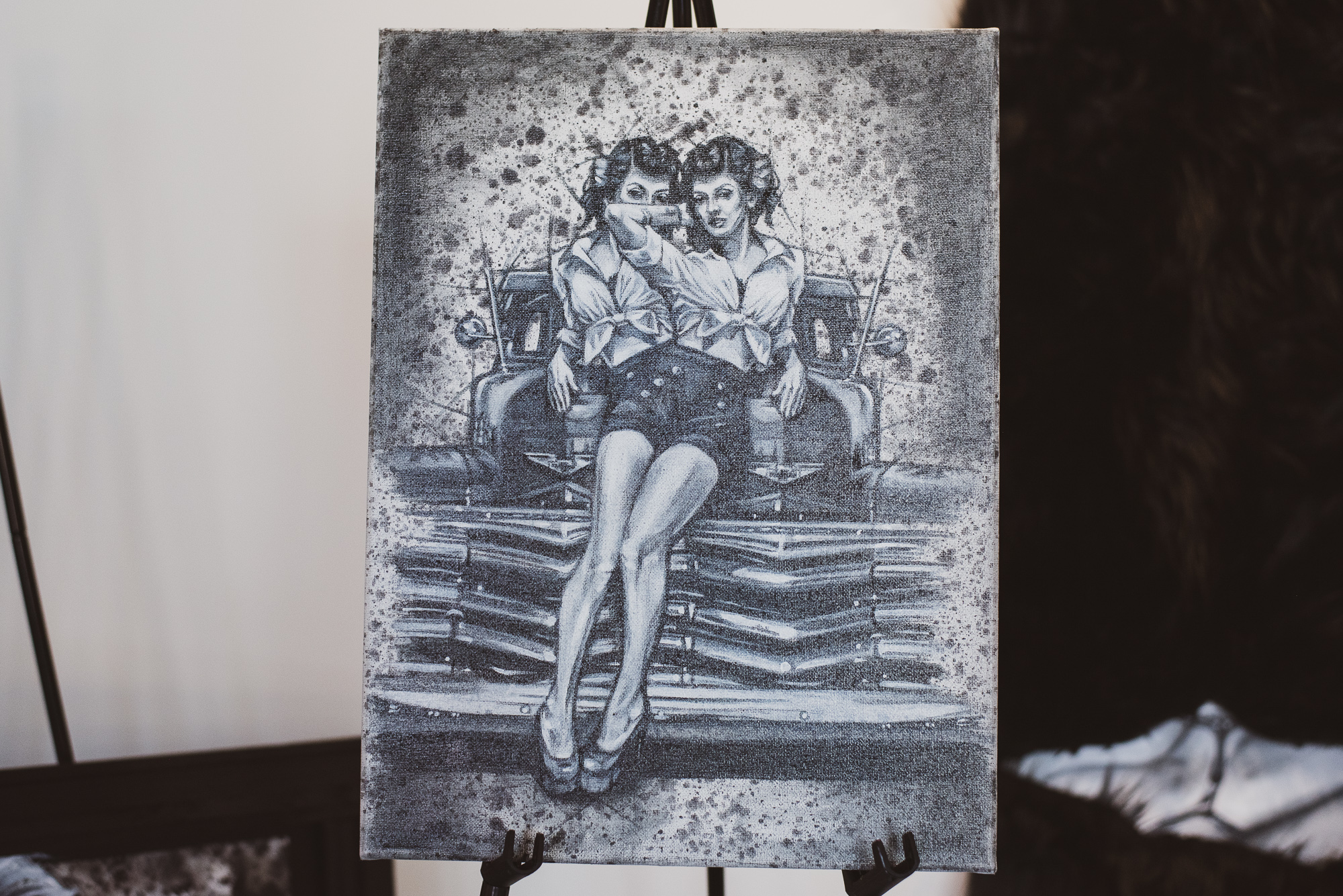 For example, one portrait features a fractured woman holding a phone up to the ear of the woman next to her. The caption reads, “We don’t gossip exactly, we distribute vital information!” and the paired statistic reads, “Studies show that women tend to make workplaces very hostile for their female workers; 70% of all workplace harassment cases are due to women bullying other women.”

Another image shows a woman, wide-eyed, with her hand to her mouth. The caption says, “He said it wasn’t rape. He called it a snuggle snuggle,” and the statistic reads, “In the United States, rape is the most underreported crime and 80% of victims do not report the assault.”

Lummus says she wraps the social commentary in an adorable time period with cute and frivolous images, cheeky portraits and jokes in order to make the message more palatable and accessible to the public. 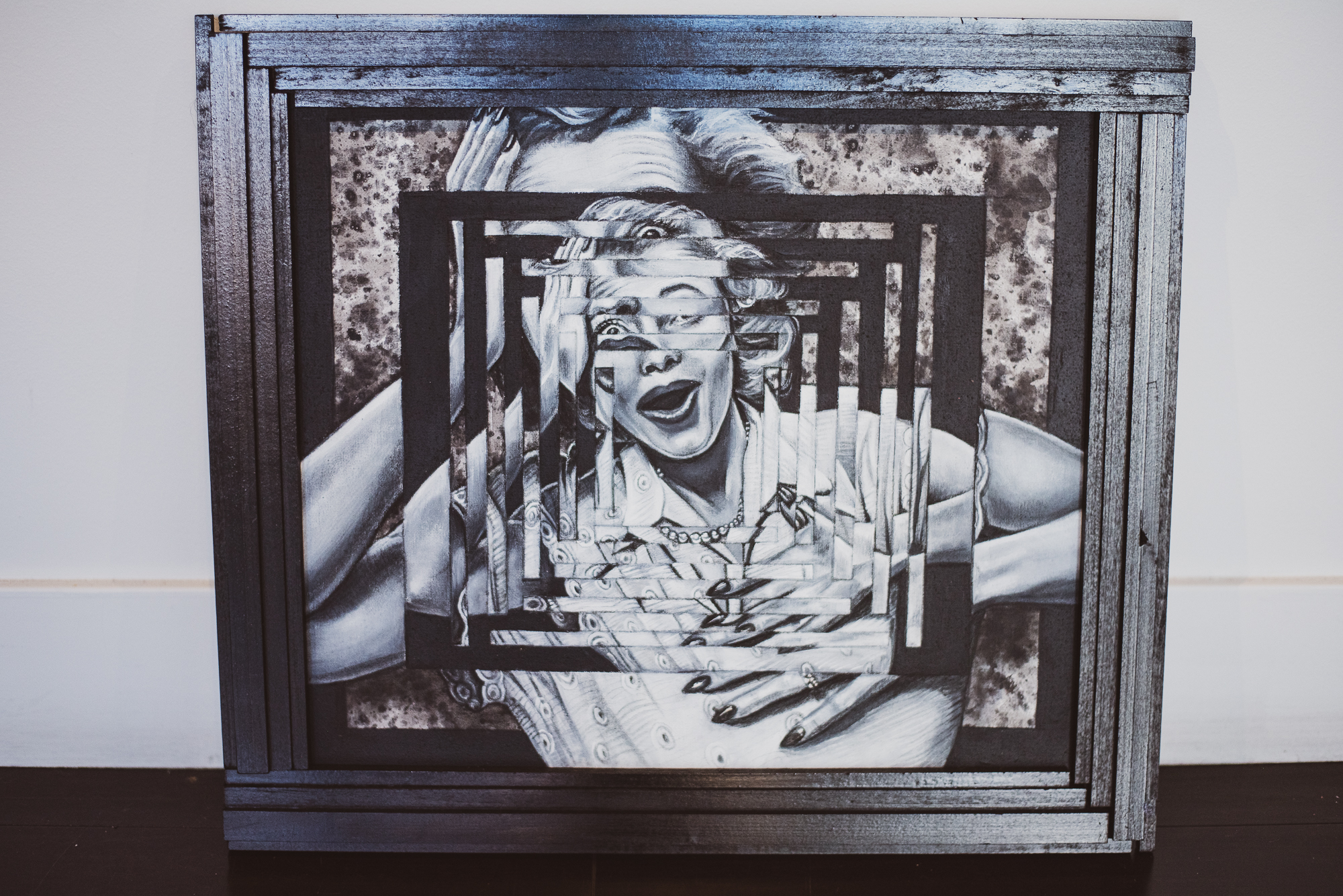 “I use data and statistics about gender politics, women’s rights and women’s safety in lieu of titles. I do this to alert my viewers. If my viewer is made aware of the inequities or problems, without feeling cornered, they can safely assess their own attitudes and behaviors,” Lummus said. “This subtle teaching tool allows my viewer to feel safe, my subject to feel seen and my message to grow.”

The exhibit’s title, Mettle Martyr, manifested from a conversation between Lummus and the Bitfactory Gallery curator she works with, Bill Thomason. While talking about American feminine identity and what that was, the word “martyrdom” kept coming back to Lummus.

“In order to be ‘America’s greatest woman,’ one has to be a martyr,” Lummus said. “Women are constantly used as the sacrificial lamb, and we do it to ourselves too … I just want to make sure that women know that regardless of where they are and who they are, self-sacrifice doesn’t have to be the way you take your journey. I just don’t think martyrdom has to be the way, now or ever.”

As for “mettle,” it’s a play on the homophone: the mettle we’re made of, meddle as in interfere and metal, the strength of actual metallic — which works perfectly, given her use of metallics and shiny, reflective materials.

Lummus has always had a heavy-handed feminist art approach, she says. So when the opportunity for a solo exhibition arose during the pandemic, she contemplated what was meaningful to her – what she wanted to go to battle for. She decided on the topic of safety, specifically women’s safety, which she says is different than people often assume.

“Safety for women is just a place of tenderness,” Lummus said. “And once society starts collectively shifting into a more conscious tenderness, we make women safe, and men will, by default, also be safe.” 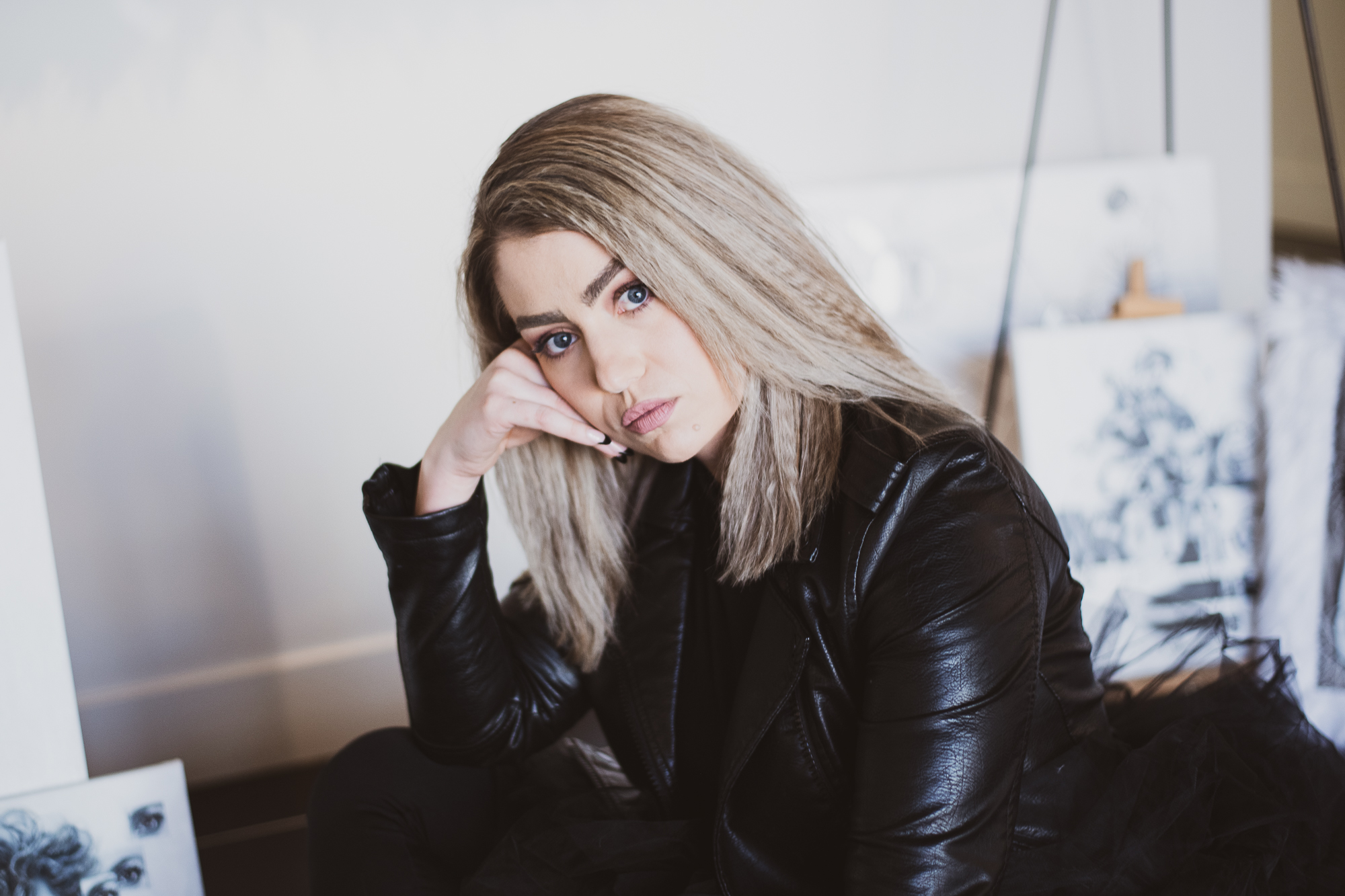 Lummus says that people have doubted her ability to understand the need for the women’s safety she advocates for – but they did so without knowing her experience.

“I had a partner of 10 years, and at the time, I didn’t really understand what verbal abuse was. I didn’t know that abuse was what I was experiencing until it turned very physical. After spending five days in the ICU, losing everything in court and being evicted with my children from my home by their father, I was on my ass. I had nothing but my skills and my family,” Lummus said.

With two of her children being too young to be in school at the time and losing her partner whom she depended on for the bulk of their income, Lummus couldn’t afford to put her kids in full-time care. So while she has achieved the coveted career of being a full-time artist now — it didn’t exactly happen by choice. She was forced to figure out how to make ends meet when she couldn’t leave her children to go to work. She found a way to survive and provide for her family, even in the midst of her own threat to safety, by selling paintings, doing commissions and art shows and applying for grants.

“As much as it was the worst moment of my life, it was a seminal moment in my life. It certainly informs everything I do now,” Lummus said. 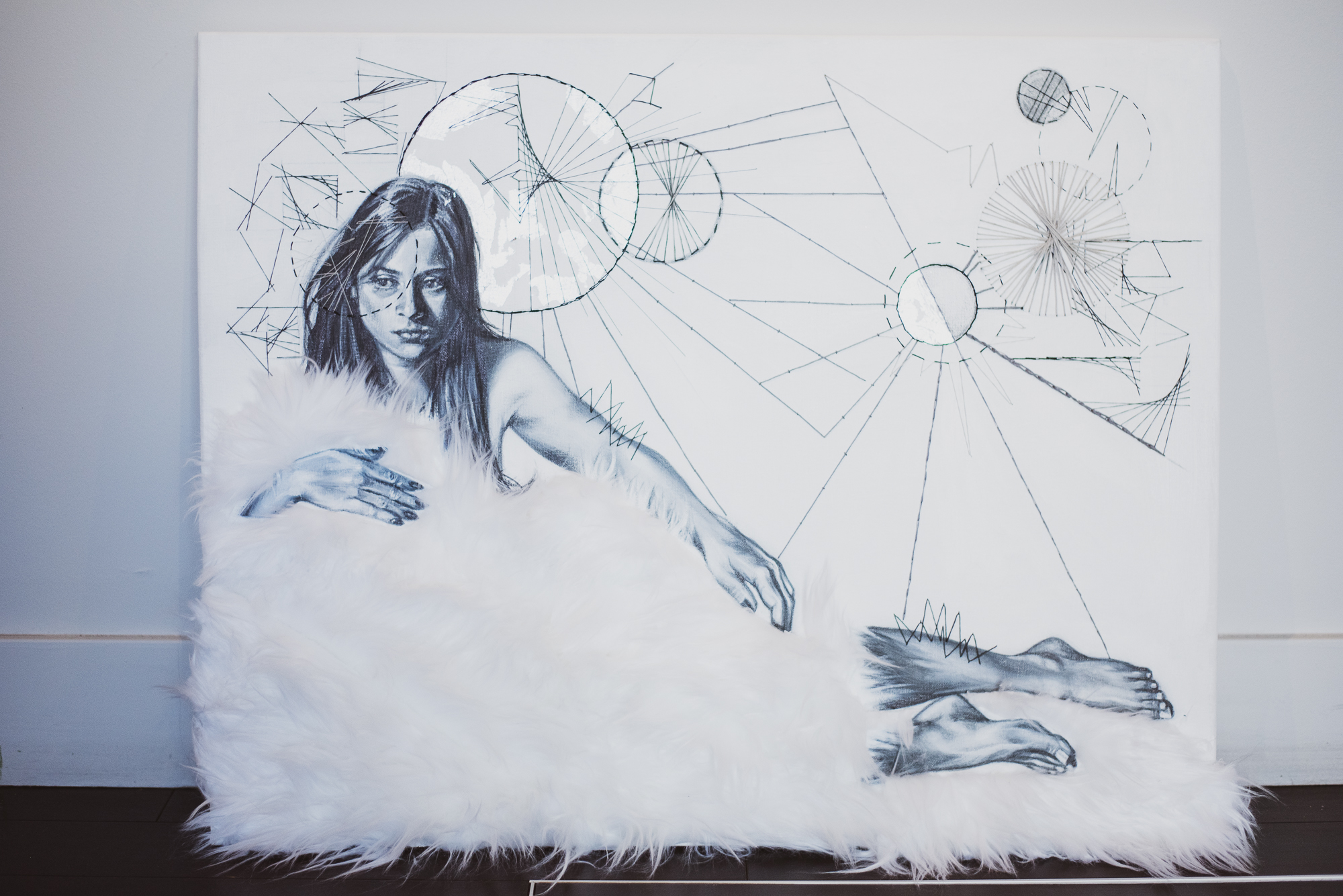 “I had photographs, a court case, 911 recordings, and still people told me to my face that I was lying about the abuse,” Lummus said. “I had always considered myself such an advocate for women, and I didn’t know the collective denial we show victims. I truly didn’t know at all how society views women.”

Lummus created this show because she believes that authentic social change comes from the top down. Her art questions and challenges the status quo of how society views women, and through Mettle Martyr, she bears the responsibility of telling women’s stories with the hope of empowering women and encouraging men to join the conversation.

“I am going to fight with my brush because it is important. I want people to see the unseen. Having experienced firsthand that often a victim’s closest friends don’t believe their story, it is now my job to tell that story,” Lummus said. 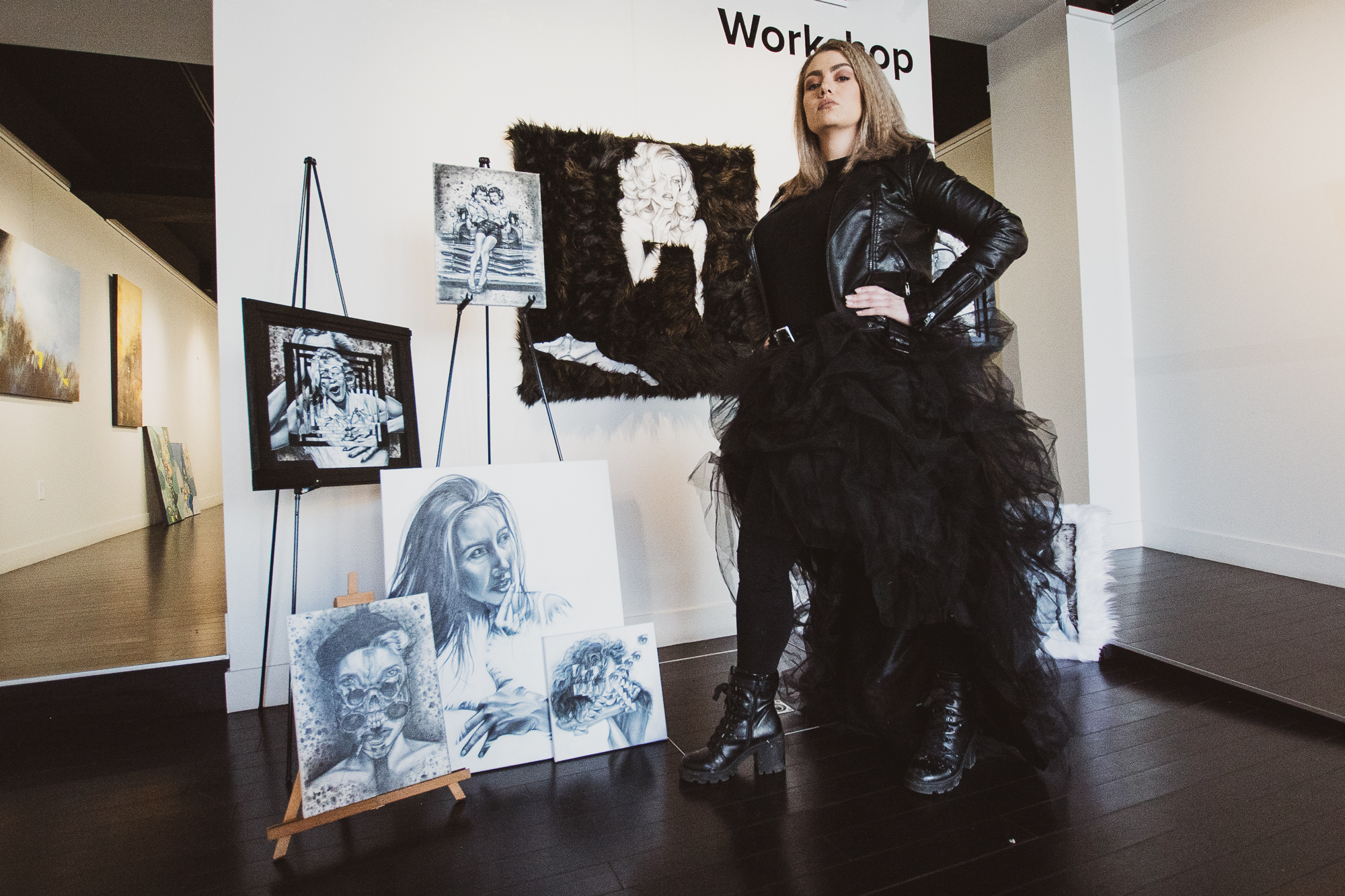 When the show premieres in November, there will also be four interactive installations of different types: two-dimensional, fiber art and a freestanding sculpture, amongst other things still in the works. The opening will have a liquor sponsorship, and Lummus hopes that people will come to fully experience the show, rather than just see it.

Learn more about Amy Lummus and her upcoming show at Bitfactory Gallery this fall here.

All photography by Roxanna Corrasco.