They say a picture is worth a thousand words, but for photographer David Yarrow, that is not nearly enough. Opened this past July in Cherry Creek, Relévant Galleries showcases Yarrow’s infamous fine art photography. Featuring stunning collections of lifestyle and wildlife pieces, Relévant curates a head-turning display of his work and tells the epic stories that go along with them. 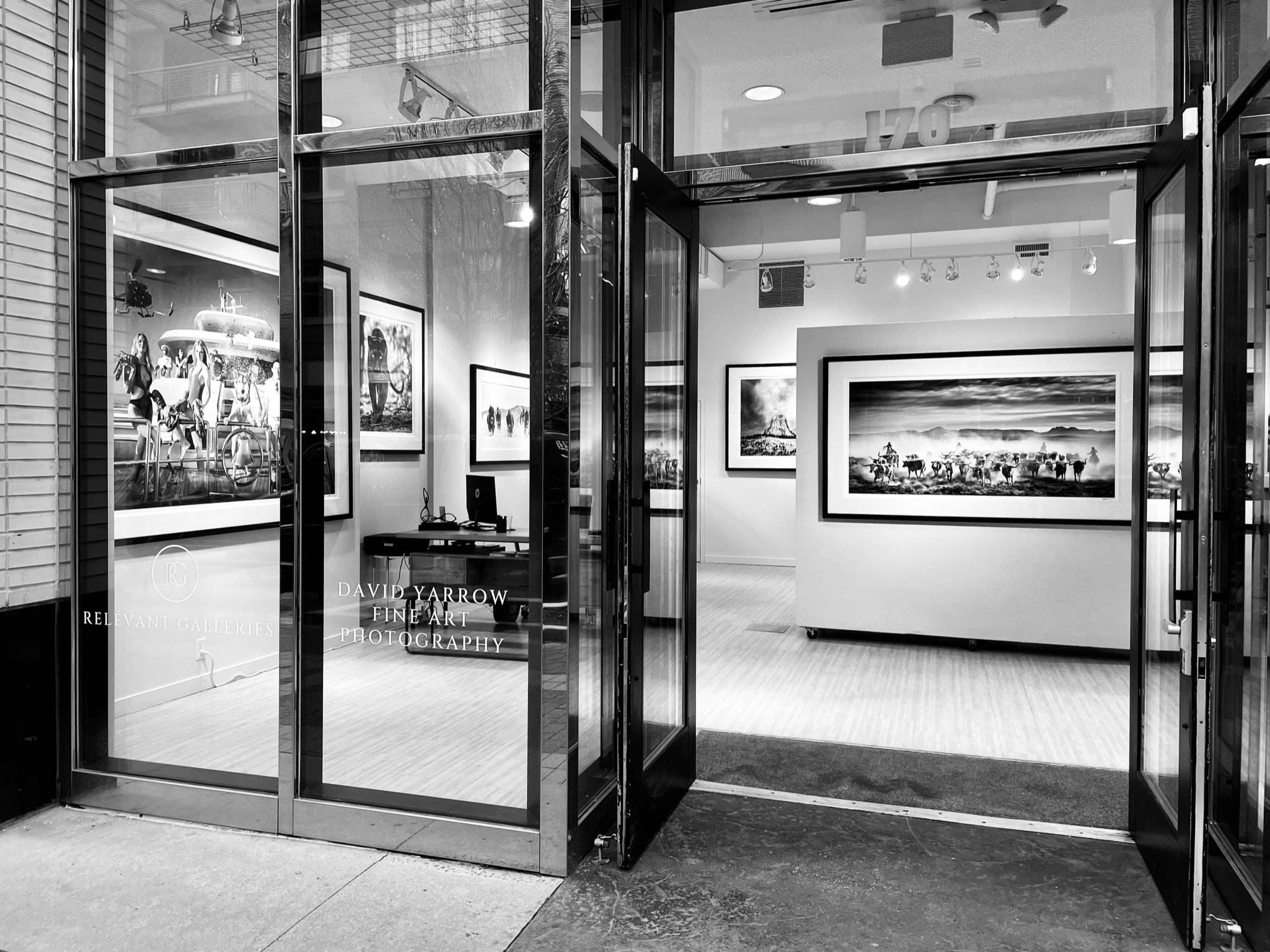 With over 50 years and eight locations behind them, AD Galleries has established itself as the largest privately-owned art gallery in the nation. Family-owned, their galleries are situated in some of the U.S.’s most luxurious cities and resorts. Each operating under different names, AD Galleries has established a profound presence across Colorado — with numerous locations in Aspen, Vail and Beaver Creek, as well as three galleries in Denver’s Cherry Creek neighborhood.

“Cherry Creek has just blown up,” explained fine art advisor Courtney Olson. “It’s the place to shop, the place to eat and there are really unique boutiques. It’s really the epicenter of so much culture that is coming into Denver and Colorado in general.”

“Photography is such a new form of fine art. Paintings have been around for centuries, but fine art photography is just taking off. This is what this artist has done, taken that photography to the next level,” said Olson. 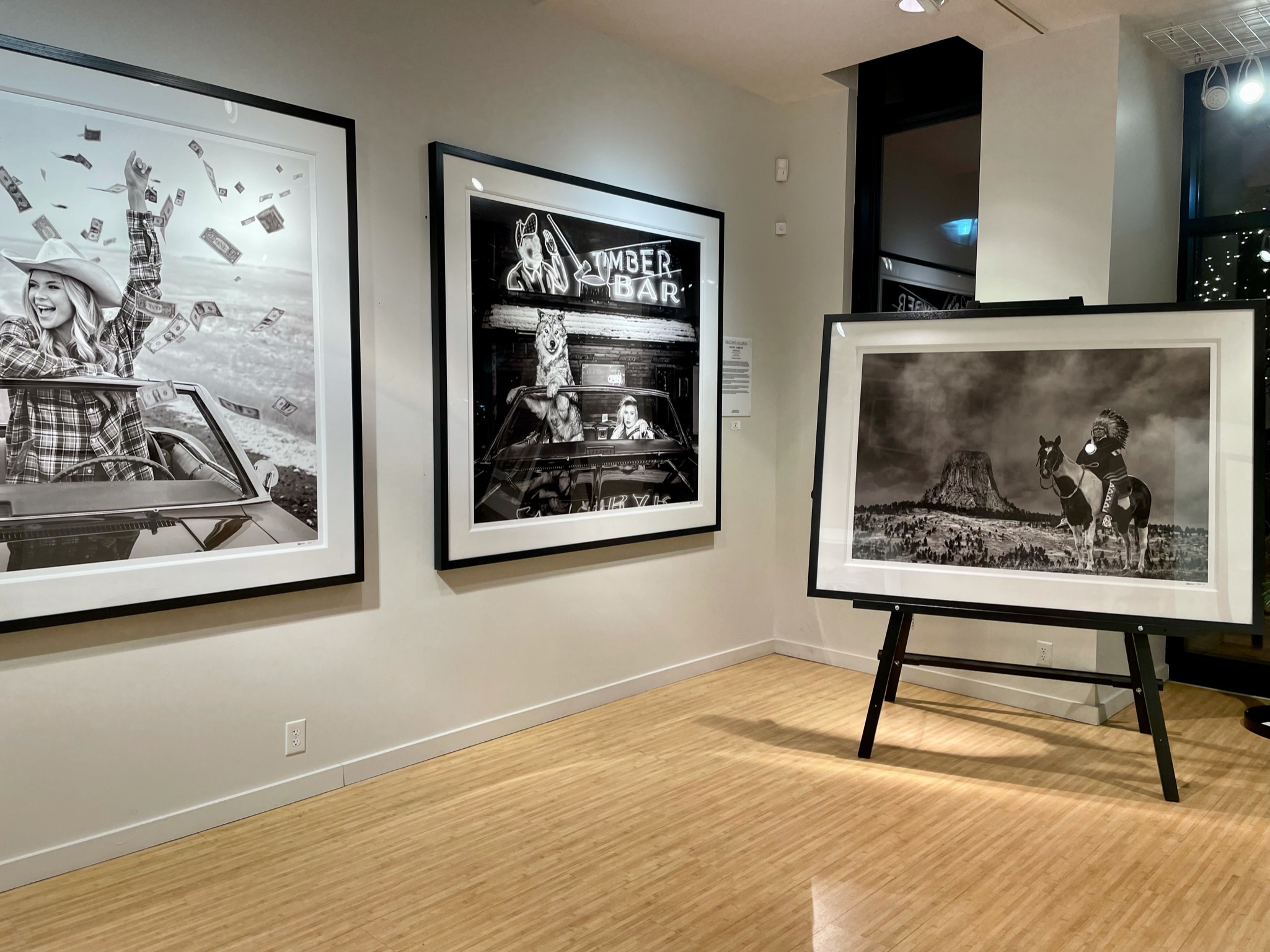 “This artist” is world-renowned Scottish photographer David Yarrow. Based out of London, Yarrow’s work is highly recognizable — his signature black and white style and large-scale work make it impossible not to stop and stare. Released in small edition sizes, typically only 12 to 20 pieces released worldwide, the gallery showcases collections of some of his most coveted work.

His portfolio of storytelling photography includes a number of high-profile celebrities — including Cindy Crawford, Cara Delevingne and Victoria’s Secret’s Josie Canseco. He is also the mastermind behind the infamous The Wolves of Wall Street photo featuring Jordan Belfort. 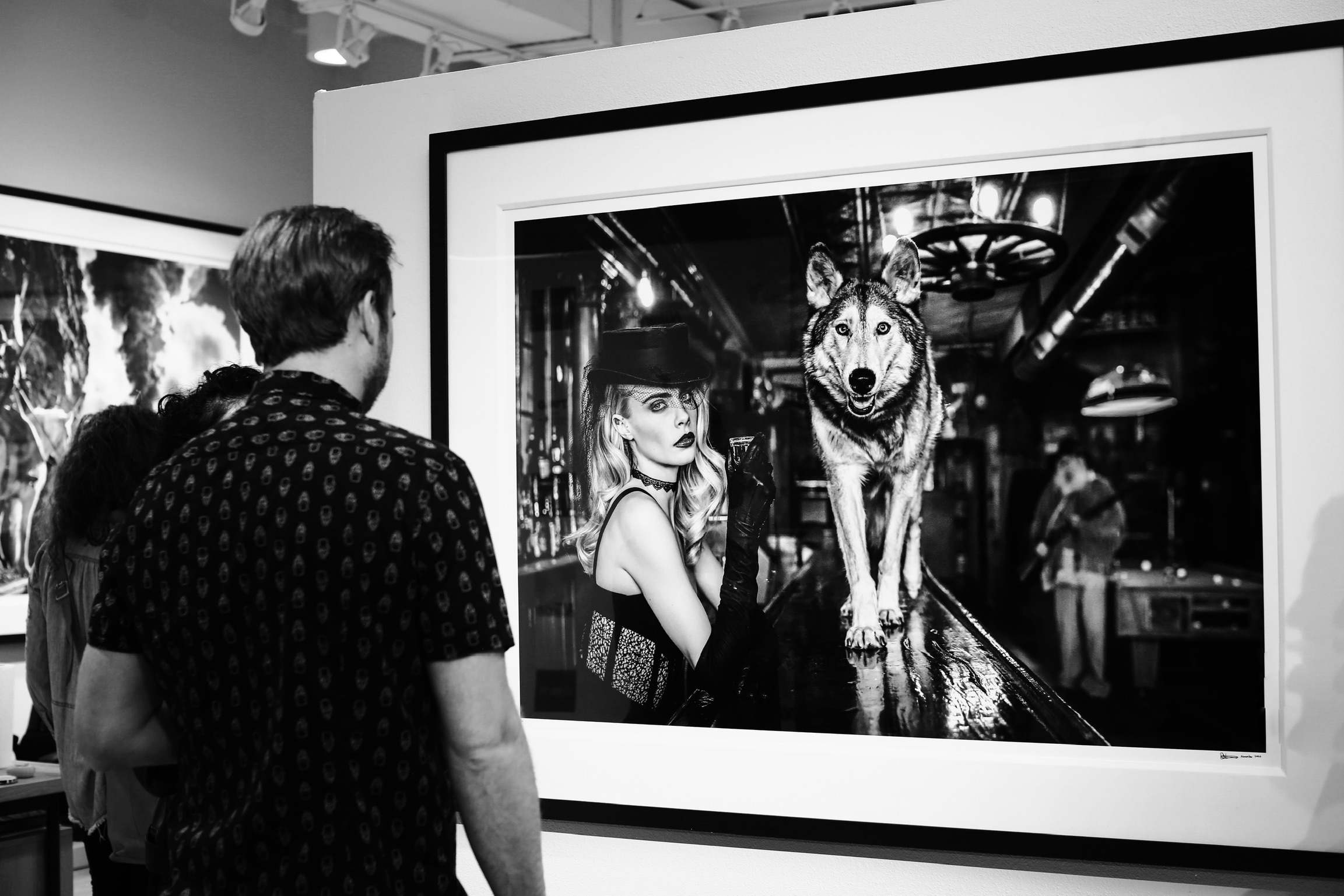 In addition to his awe-inspiring lifestyle pieces, Yarrow’s work focuses largely on wildlife photography. His work has taken him across the world, putting him face to face with lions, gorillas, bison and many more. These collections are simplistic yet powerful — the black and white images giving a glimpse into the soul of his subjects, rather than just the landscape around them.

“You walk by the window and flip your head,” said Olson. “It’s not just another picture of an animal, it’s so much more than that.”

The same could be said for all of Yarrow’s work. Watching from inside the gallery, nearly every single passerby stopped to take it all in. One might attribute this to the sheer grandiosity of the collections, each piece made to cover an entire wall.

“Typically for fine art, you find a lot of people do much smaller pieces. He flipped that switch. He wanted it to be larger than life, the focus of the room,” explained Olson. 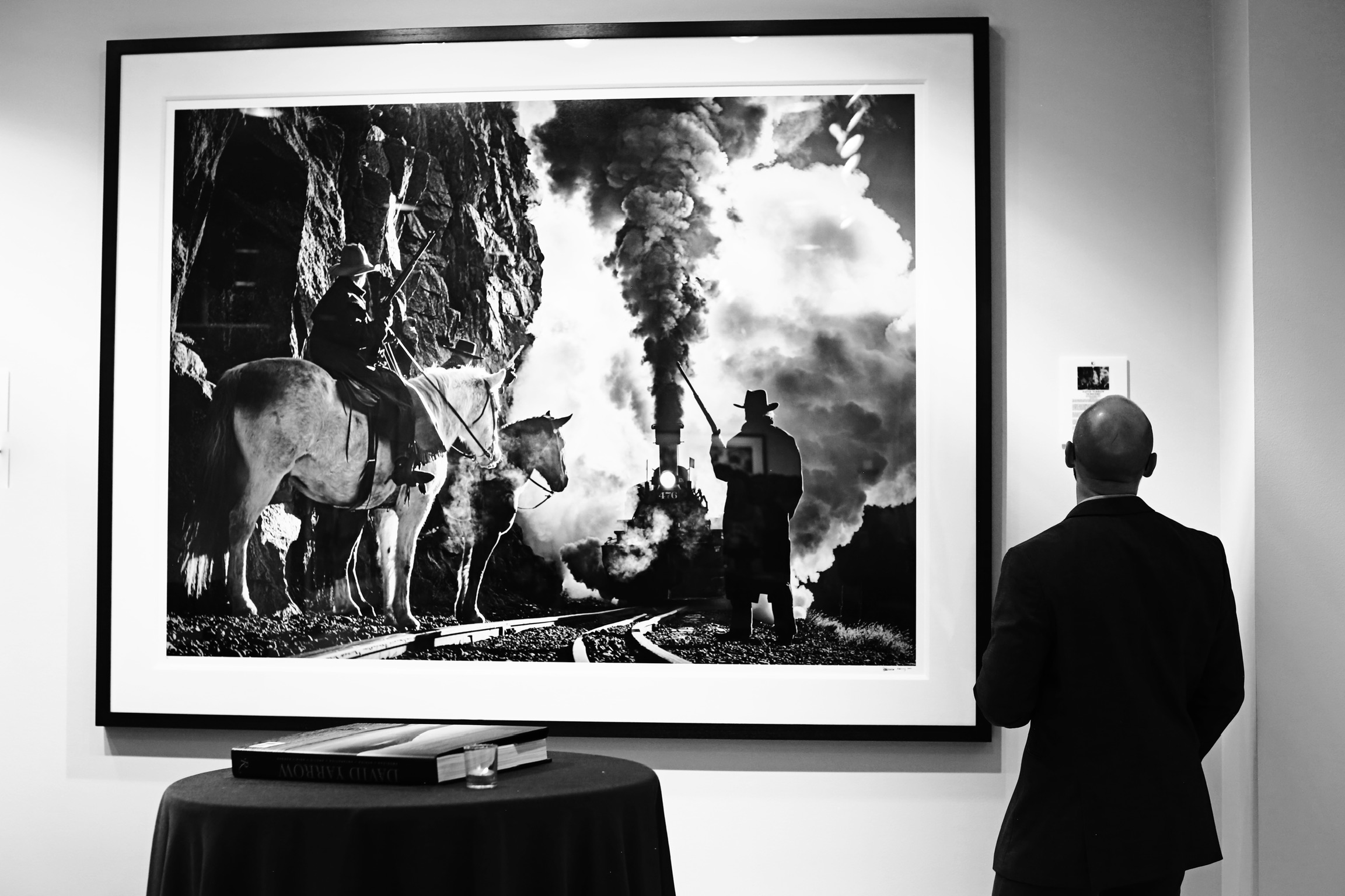 But while you may be drawn in by the size, it is the story behind each piece that captures its viewers. Nothing is edited or photoshopped, so when someone sees a Victorias Secret model posing alongside a wolf in a moving convertible, or a pair of cowboys standing ground in front of a moving train, they must know how this vision came to life. Yarrow operates more like a film production than a photo shoot, using all means necessary to create a masterpiece.

“Every single time he takes a shot, there’s an entire storyline of the piece. Whether that’s the inspiration behind it, the logistics of the shoot. It’s one thing to take a picture, it’s another to tell how it all happened,” said Olson.

These stories are endless, each crazier than the last. If there is one common theme among his work, it is authenticity, be it from the subjects he’s photographing or the story he’s telling through the shot. Yarrow has gathered entire African tribes for a photoshoot, put middle-of-nowhere western bar owners alongside the world’s top models and used helicopters and snowblowers to shoot dollar bills over the top of a yacht. It is clear that Yarrow is both charmingly personable and utterly fearless, willing to talk to anyone or go to any length to get that perfect shot. 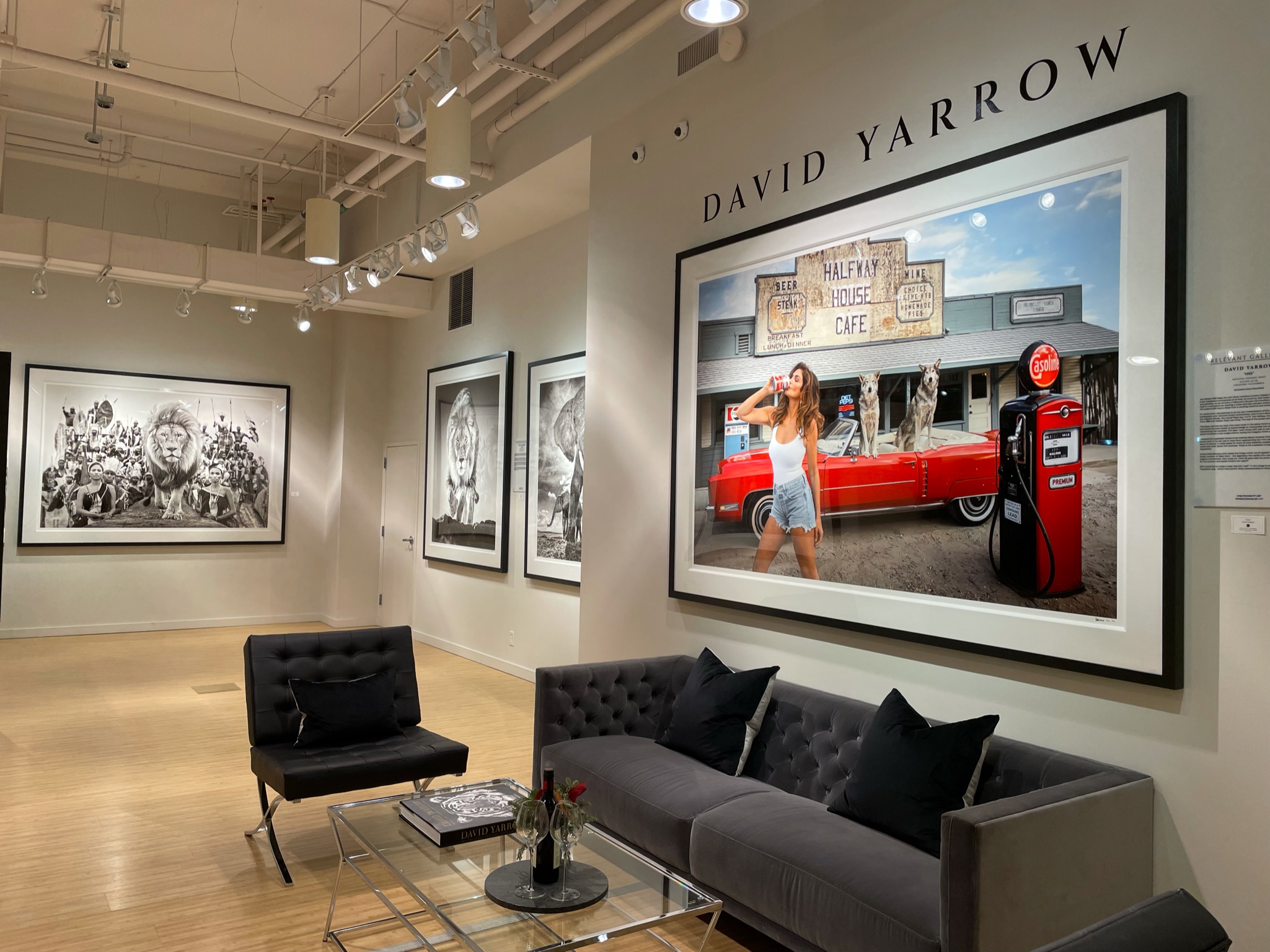 Most notable, however, is the philanthropic work behind each of Yarrow’s pieces. Since 2018, his photography has raised over $11 million for conservation organizations as well as a number of charities.

“[Yarrow’s] stance is ‘I can create, but if I’m not giving back to the communities I am photographing, what is the point of it all?’” explained Olson.

Yarrow is an ambassador for numerous conservation efforts, including The African Community and Conservation Foundation and The Kevin Richardson Foundation. His 2020 #KoalaComeback campaign — documenting shocking images of the devastating fires that overtook Australia — raised $1.4 million to support recovery efforts in the region. He also strives to align with the causes his models and subjects are involved in. His recent collaboration with Cindy Crawford raised over $3 million dollars for the University of Wisconsin’s Pediatric Cancer Care Unit in Madison, where Crawford’s brother was treated for leukemia.

Following a renovation finishing in March, Relévant will soon be one of the largest galleries showcasing Yarrow’s work in the United States. While the work sold in the gallery may be out of budget for some — a single piece ranging anywhere from $20,000 to $200,000 — Relévant opens its doors to all who are mystified by the grand pieces hanging on their walls and who want to hear the endless tales of David Yarrow.

“You put these pieces where you want to sit and talk about it. That’s the experience side of his work. It’s not just art, it’s entertainment” said Olson. “To talk about him and his stories, it’s never ending. That’s the unique part of him and his brand, being so open about his collection and his life. Everyone is allowed in on the secret.”

Relévant Galleries is located at 170 Clayton Ln, Denver, in the Cherry Creek North Neighborhood. The gallery features the work of fine art photographer David Yarrow. For more information about the artist and to learn about upcoming events, visit their website or follow them on Instagram.