Occupying the lower unit at the Savoy at Curtis Park, Denver-based nonprofit PlatteForum debuted its new office space and exhibit, Portraits of Change: Inspired by the Uprising, on November 5 in collaboration with its annual Conversations with Gen-Z on November 6.

Portraits of Change: Inspired by the Uprising, curated by the organization’s new executive director and former artist-in-residence, Michael Gadlin, showcases photographs taken by the husband and wife duo, artists and activists Jonathan (Afro-indigenous) and Letishia Kelley (Diné). The couple document the faces and moments behind the uprisings in Minneapolis in the aftermath of George Floyd’s murder and the violence against land protectors in South Dakota. 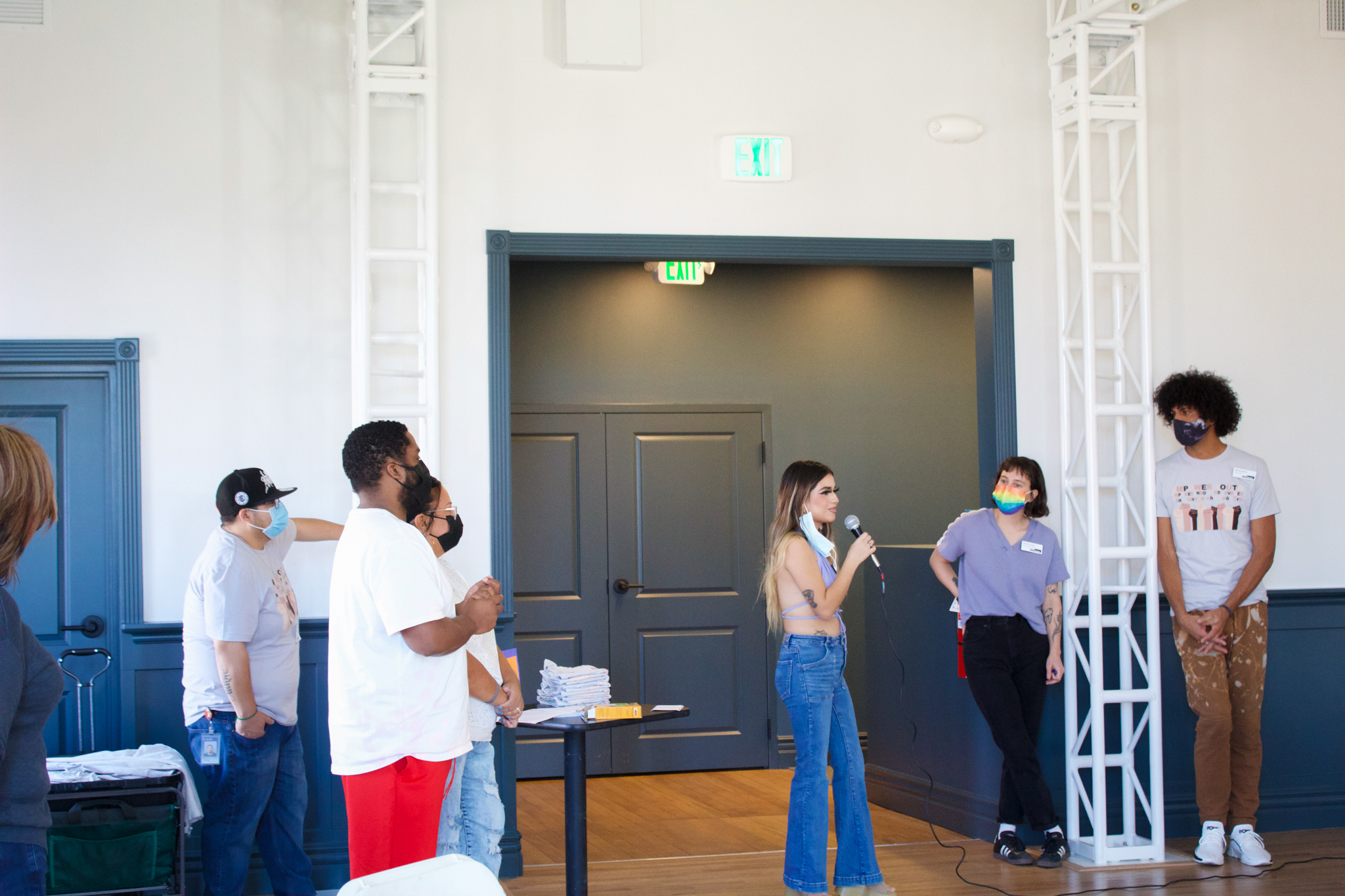 “We are a place where artists and youth find resources to realize their vision, reach their full potential and support their distinct identities of our community through creative practice,” announced Gadlin.

Participating high school interns of PlatteForum’s ArtLab program engaged with community leaders in the upstairs ballroom following the exhibit’s debut from the night before. Ready with critical questions, students sparked conversations that drew from the exhibit’s themes of social justice, systemic racism and political change.

“As an intern, I was always really excited to have these conversations about activists’ movements and things that are important in the world right now,” said former intern Destiny.

Interns and community leaders gathered at separate tables, each dedicated to a specific topic with prewritten questions for leaders and students to pivot conversations from. At one table, the group addressed the exploitation of indigenous people in American society, drawing examples from pop culture and education curriculums.

“When you’re younger, you’re taught what to think, you’re taught the systematic way. But you’re never taught how to think or ask certain types of questions and from this society, you only get the perspective from white culture and supremacy,” Letishia explained to her table which focused on the dehumanization of indigenous people. “It’s now time for indigenous people to be heard.” 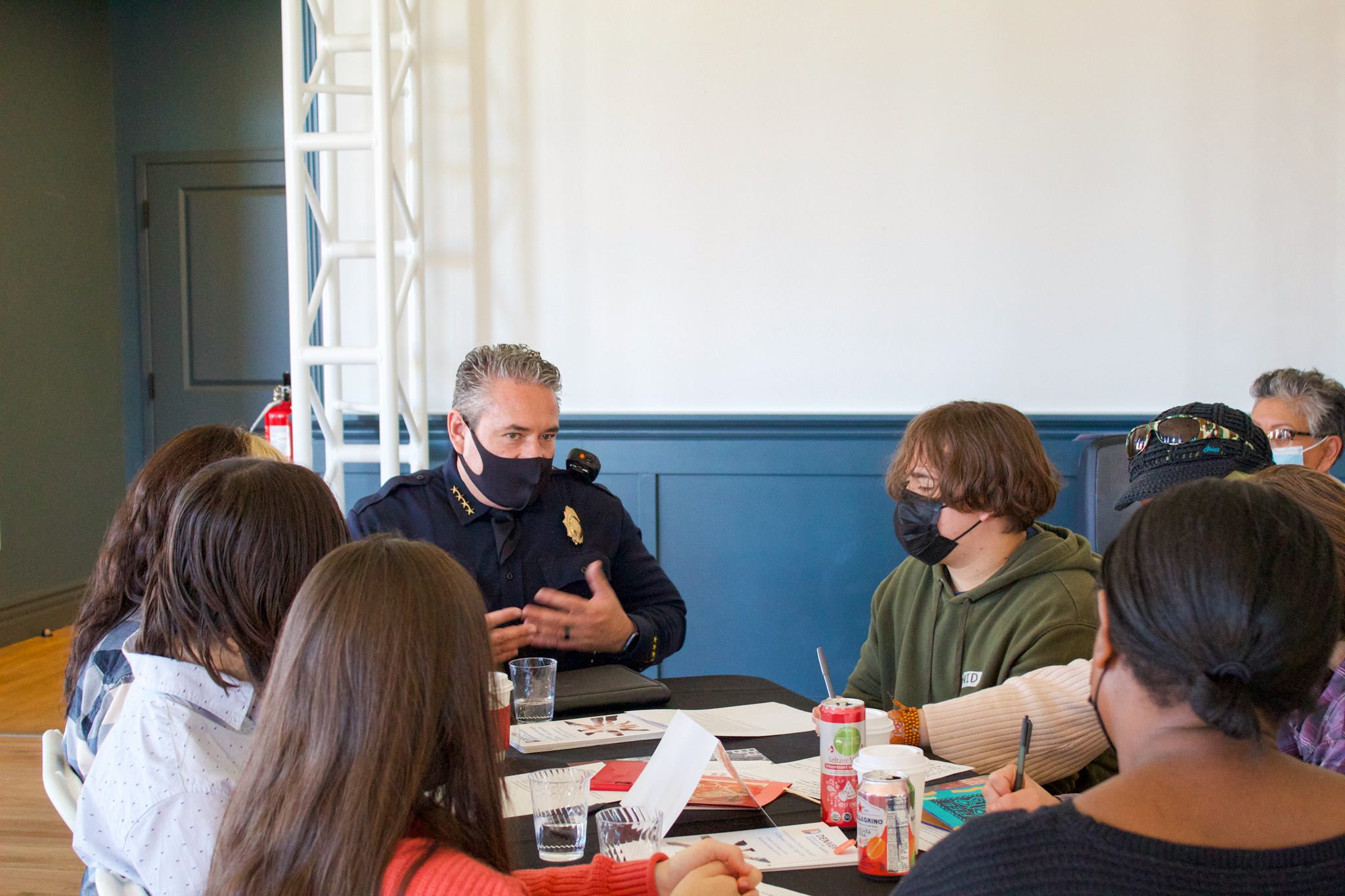 Other tables discussed issues like historic whitewashing and how policing behaves as a form of modern-day colonization, touching on issues like redlining, the war on drugs and mass incarceration. Another discussed how the media’s coverage of protests impacts civil rights movements.

“Individual people also have to make an effort to break down biases in the media through independent documentation and using their voice as opposed to the voice of an organization that tends to have an agenda,” commented one intern.

At a table focused on the whitewashing of history, students deliberated how standard curriculum dismisses the roots of injustice, typically to uphold institutions and white supremacist ideology.

“[With] young people building their own awareness about what’s happening inside our classrooms … hopefully, we can start to gain some more perspective about how to create change,” said another intern.

Downstairs, the exhibit features photo collections of the demonstrations which took place in Minneapolis and in South Dakota on indigenous land in response to injustice backed by certain government officials. You Are On Stolen Land captures the response from LANDBACK organizers to the mass incarceration of Native American’s at the Pennington County Jail in Rapid City, South Dakota. According to the Safety and Justice Challenge, about 50% of the daily jail population are indigenous people. 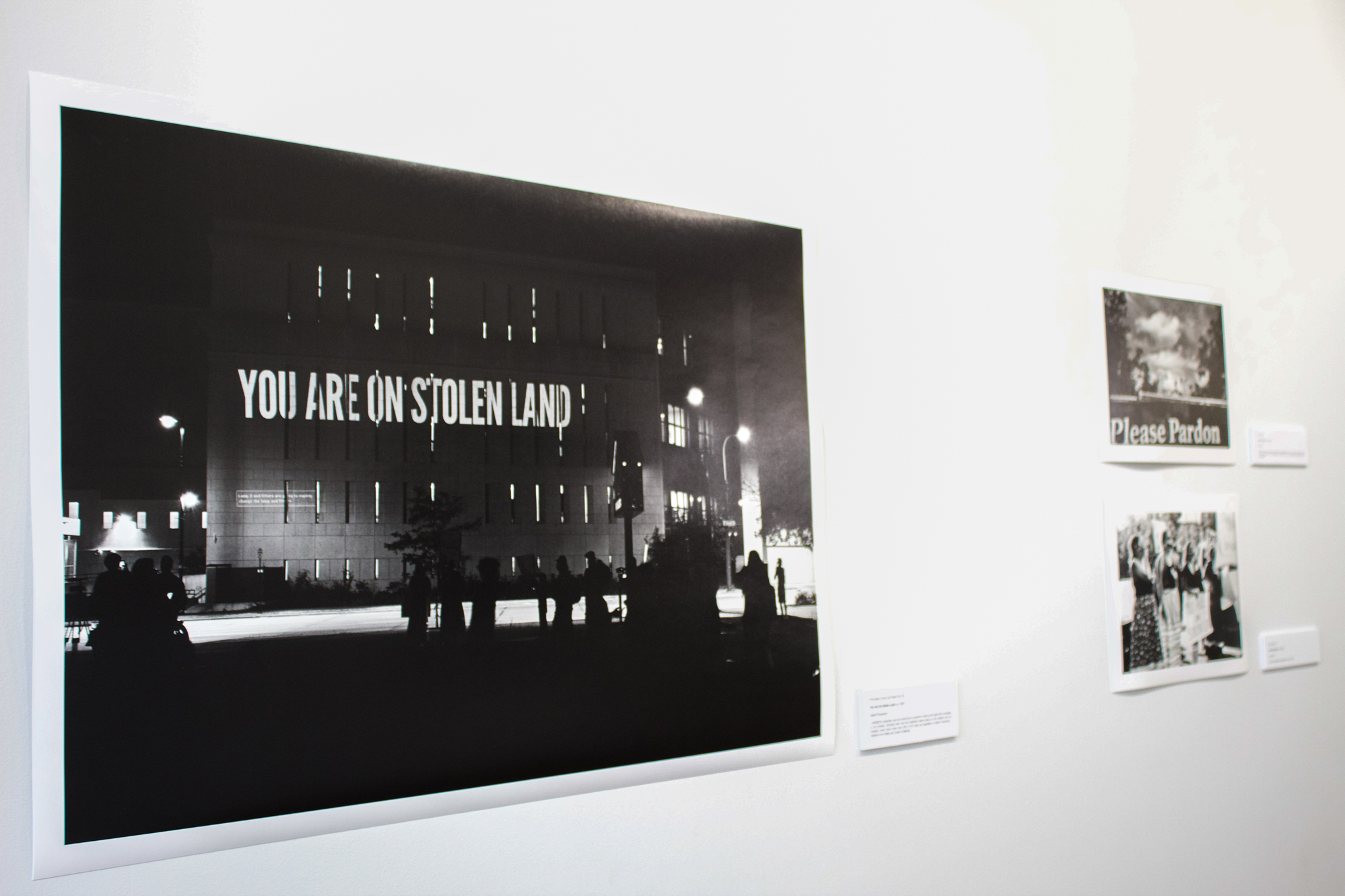 “You Are On Stolen Land” 2020 captured on digital camera.

Another photo captured the GOP Fourth of July rally held at Mount Rushmore, without permission from the Lakota Tribal Council, where counter-protesters were met by a blockade from Trump supporters and violent pushback from law enforcement.

Two protesters, who Letishia captured for the exhibit, were detained. “They weren’t read their rights or even charged for anything,” she said. 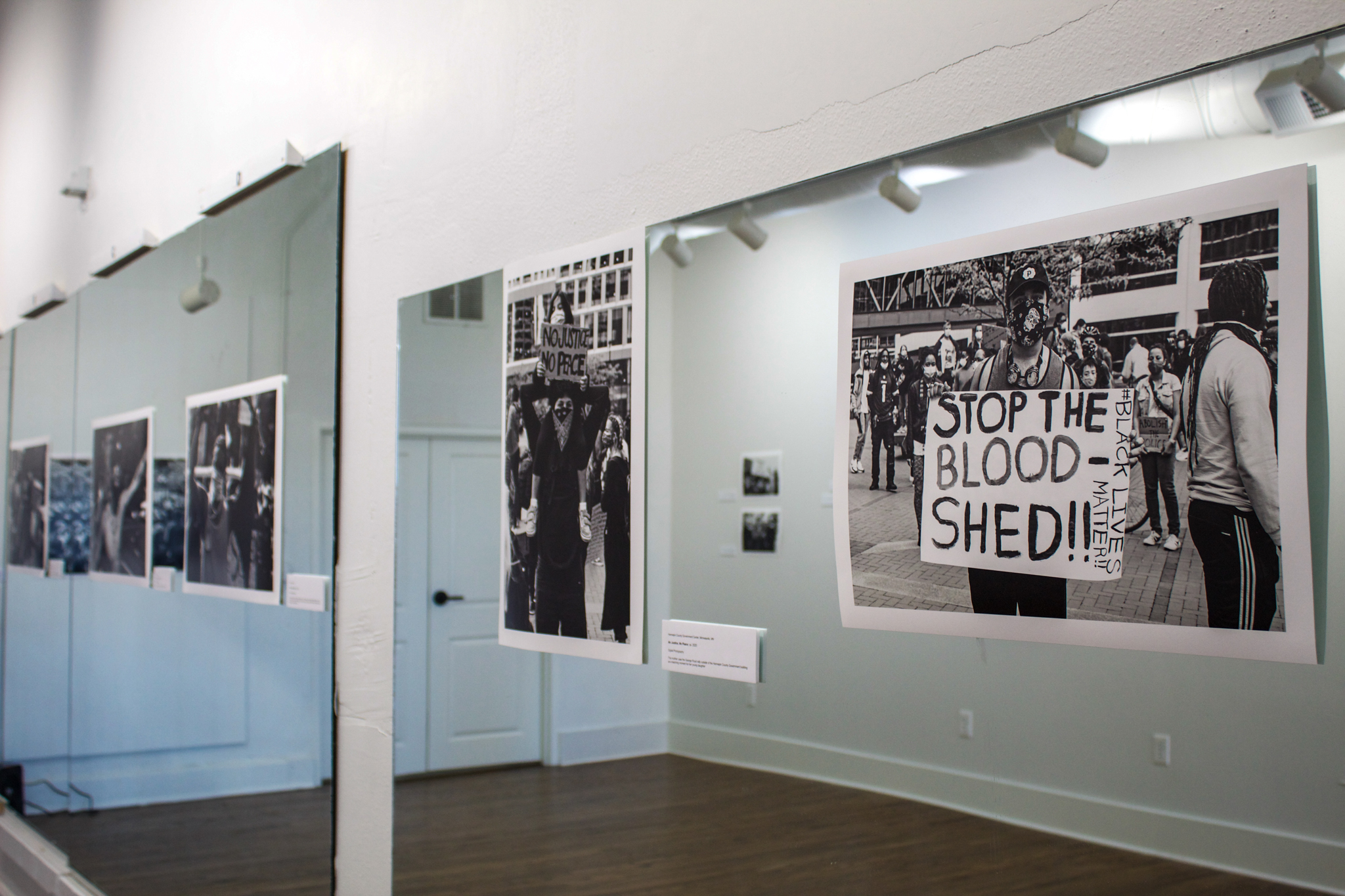 Through these powerful moments, both Jonathan and Letishia want people to understand that it shouldn’t take a big event or news story to prompt social engagement and awareness. Injustices against BIPOC happen daily, they said, and it takes both individual and communal accountability and activism to ensure that we focus on these stories and take the steps to create true systemic and policy change.

“Sometimes the voices of those that may not be in power or control aren’t always told in the best light,” explained Jonathan. “It’s important to take control and ownership of how we go about creating platforms to talk about our stories and what’s important to us.” 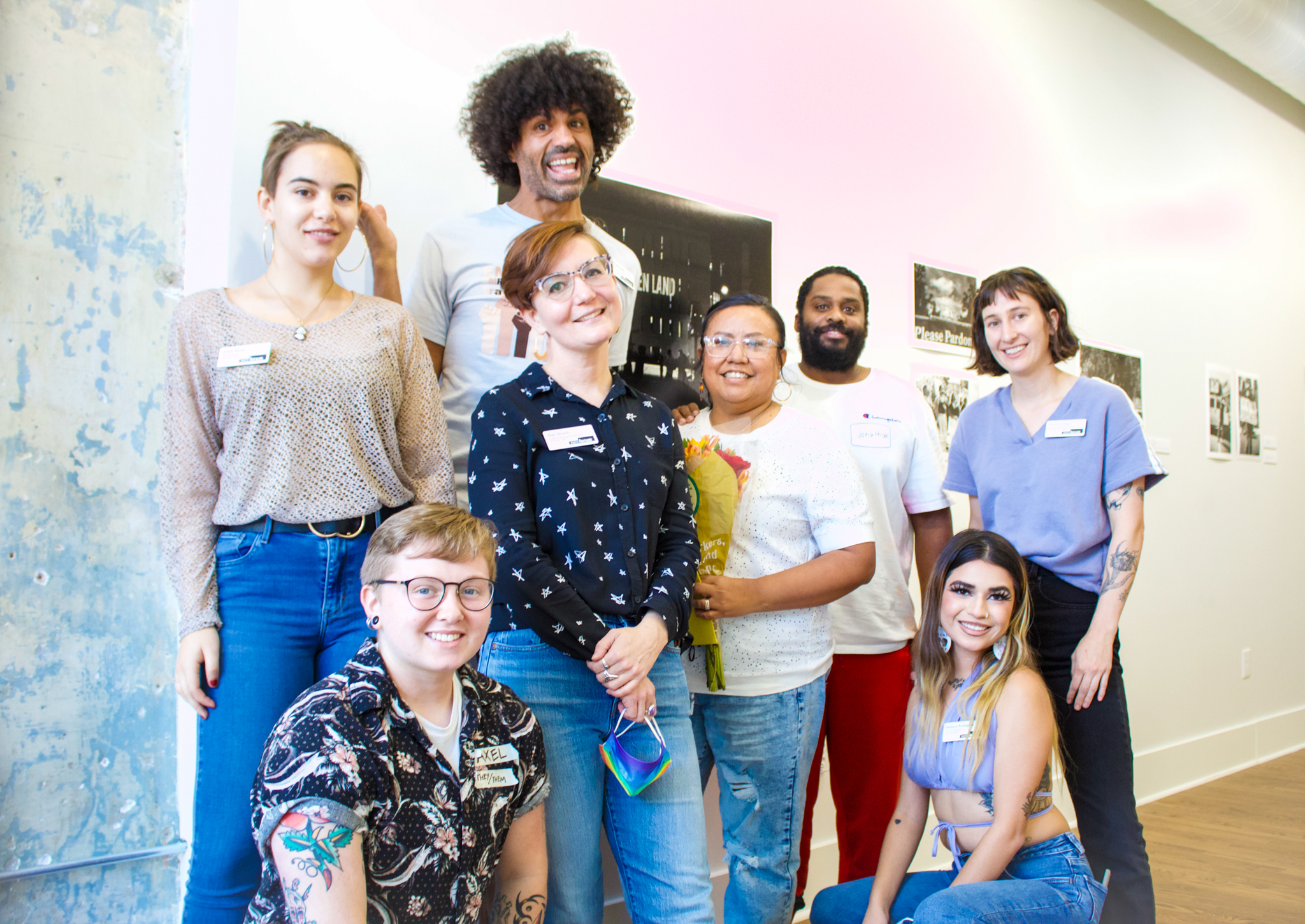 Portraits of Change: Inspired by the Uprising is on view at PlatteForum on 2700 Arapahoe St., Denver until November 19. To find out more or donate to the organization, visit here.