Before the pandemic, Denver’s national music scene had been on the rise for the better part of the decade thanks mostly to a progressive culture, world-famous venues like Red Rocks, and a fascinating electronic scene. What’s more impressive though, is how Denver has bounced back from a year deprived of live music. From the Underground Music Showcase (UMS) and the Westword Music Showcase to Rock De Mayo and Down in Denver, the city has seen its fair share of impressive summer lineups. Most recently, the Levitt Pavilion hosted the first annual High Ground Festival, which brought the ambient, laid-back side of electronic music to the Mile High City. Local, national and even international acts came together to celebrate the beginning of Fall, embrace artistic expression and – you guessed it – getting high. The festival’s first year was filled with highs and lows, with plenty of room for growth and plenty of things to be proud of.

Walking into the festival, the vibe was quickly apparent. This was not your typical electronic music festival. Although there was a fair amount of rave attire and festival toys like Flow Rings and light-up Hoola hoops, there were also a ton of people dressed casually, laying on a picnic blanket and enjoying the clear blue sky. With plenty of space to spread out on Levitt’s grassy hill, there was room to escape the crowds and embrace a slightly removed space with your own group of concertgoers. Of course, if you wanted, you could also welcome the more traditional festival atmosphere in front of the High Ground Stage – the festival’s main stage – which remained pretty lively throughout the day and into the night. 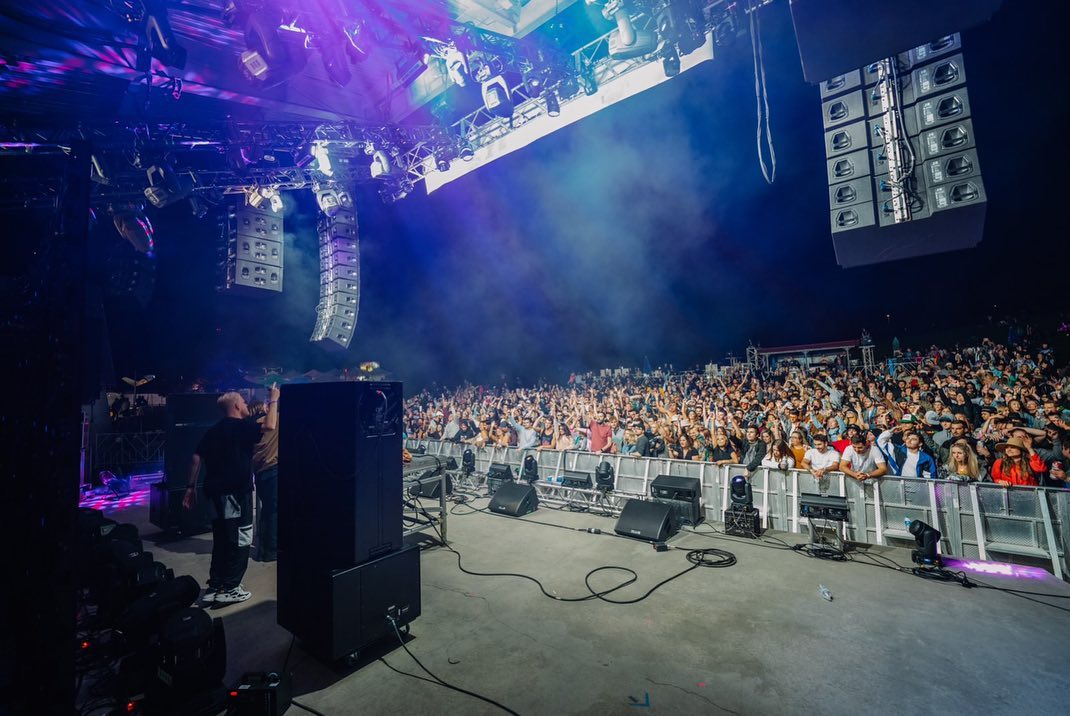 The scene at High Ground’s smaller stage  – the Levitate Stage – was a much different experience. While the intention of bringing Denver’s most exciting DJs and artists like Erin Stereo and Waxcat was commendable, unfortunately, there wasn’t too much care put into this important part of the festival. For starters, the stage was much too small to accommodate a full band. Speaking to one of the performers, we were told their drummer couldn’t be a part of the performance because there wasn’t enough room for his drum kit. It’s easy to understand why High Ground focused on the main stage experience, which featured headliners like KASBO, Snakehips and Louis Futon, but it was sad to see most of the local performers swept under the rug. It is important to acknowledge that the first two hours of the festival were completely dedicated to local DJs and artists on both stages. However, since the festival delayed opening the doors for the first hour due to some technical issues, some of these artists played for an empty crowd, only enjoying the sounds of an anxious crowd waiting in line outside the festival gates.

Although the music was the main attraction, this festival was a multifaceted experience. A small market showed off both local and national businesses ranging from Proper Canna Natural’s CBD products to Water Buffalo’s hydration packs, with plenty of apparel and food shops in between. The market space remained pretty active throughout the day, and the vendors seemed to enjoy the attention. When the sun went down, the market transformed into a world of its own, a beacon of light and entrepreneurial spirit glowing in yellow and blue neon shades.

Next to the marketplace was a space dedicated to visual art. The art was psychedelic, groovy and colorful, perfectly matching High Ground’s sonic vibe. Even cooler, most of the artists were doing live paintings. It’s always fun to see artists at work, and observing the creative process is an intimate experience that generates a deeper feeling of connection to whatever space you’re in – High Ground was no different.

All of this stuff was great but at the end of the day, the most important aspect of any music festival is, undoubtedly, the music. After a delayed and rocky start, the afternoon saw some great performances by Louis Futon and Haywyre. Both artists killed their sets, mixing ambient contemporary dance music and electro-funk with some deeper, festival-ready bass music curated for an incredible live experience.

When the sun went down, Kasbo took the stage before Snakehip’s headlining set. From start to finish, Kasbo curated an entirely new set to debut at the festival, and he certainly didn’t disappoint. The special setlist was groovy, surprising and fundamentally electronic. As Kasbo messed around with a live drum pad and unique transitions, he kept the energy exactly where it needed to be. Although he occasionally dipped into quicker tempos and deeper bass, the majority of his set was dedicated to his traditional chillwave ambiance and vibey electronic sound. The speakers were never quite loud enough, but it wasn’t too noticeable until Snakehips came on. 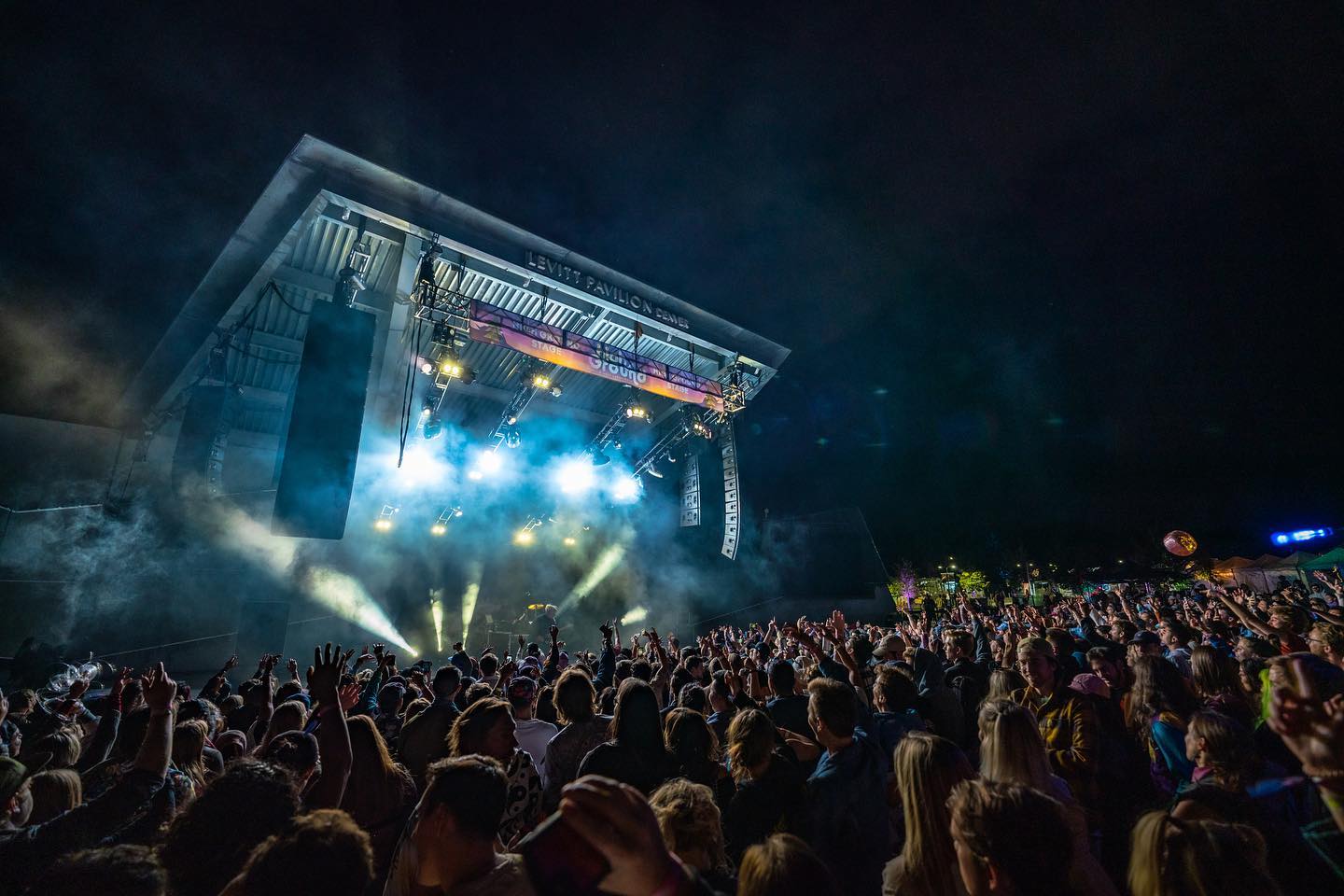 To be fair, Snakehips actually put on a great performance filled with contemporary hip-hop remixes including legendary tracks like Snoop Dogg’s “Drop it Like it’s Hot” and Nelly’s “Hot in Herre” that got the crowd dancing and singing along. It definitely wasn’t their fault the sound team killed the mood.

From the very beginning of their set, it was clear the sound had been dialed back a good bit. Usually, festivals amp up the sound for the headlining act, giving them more space to impress a massive audience. High Ground made it clear that the festival had a hard stop at 10:30 due to sound ordinances. As an artist, you should curate your performance accordingly and leave room for an encore before your time is up. However, it’s completely unfair to turn the speakers down to an annoyingly quiet level for the entirety of a headliner’s set. The result was a pretty awkward experience as the crowd struggled to maintain their energy without loud sonic stimulation to keep them going after a long day.

That’s not to say the crowd didn’t try. Snakehips closed the night with their biggest hit “All My Friends,” a wonderfully pleasant contemporary dance track perfect for celebrating the company of your festival friends. Unfortunately, the sound was turned down so much that the crowd lost a lot of their enthusiasm as they desperately tried to make up for the low volume by yelling “all my friends are wasted” with their arms around each other. 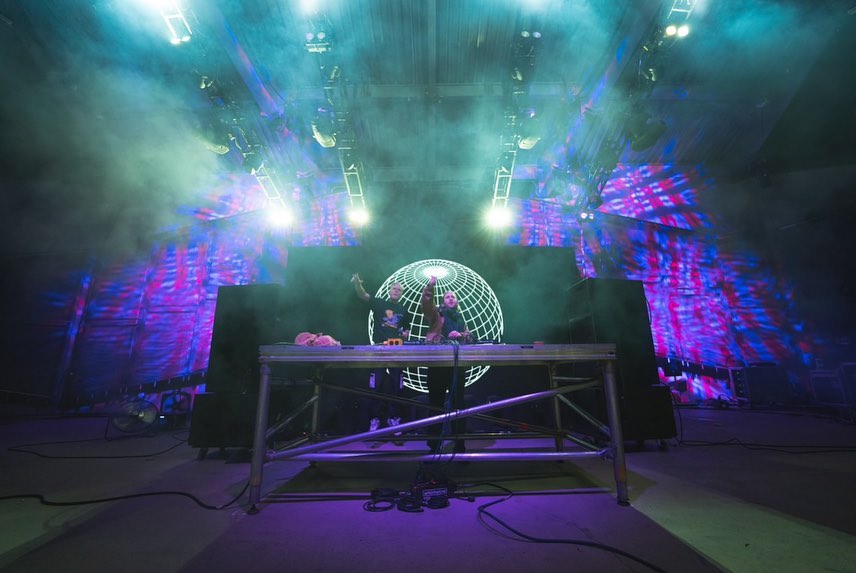 The crowd’s frustration grew quickly, and Snakehips was equally displeased. As the crowd cheered for an encore, Snakehips hopelessly argued with the High Ground promoters to play one more song while the crowd booed the staff in irritation. It was an unfortunate end to a mostly positive experience.

It’s rare that a first-year festival gets everything right. Grand, multifaceted experiences like the High Ground Festival have a lot of moving parts, and it sometimes takes years to get everything straightened out. Thankfully, the High Ground Festival succeeded in creating a consistent and coherent vibe, from the live art and marketplace to a dedicated Yoga and meditation tent. Most of the elements worked synonymously to deliver a thematic experience that represented the Denver lifestyle in an authentic way.

The issues High Ground ran into are not fundamental ones. They’re relatively easy fixes – put more thought and care into the smaller stage, and make sure the sound can play at full blast until the very last minute. If these important issues are dealt with, High Ground has a chance to draw local and national attention for years to come.