Members of the local Afghan community and organizers shared stories, chants of solidarity and poetry readings devoted to personal experiences of both living in Afghanistan and growing up in the United States as Afghan-Americans.

“What’s hard is that I promised my mom we’d visit her family in 2021,” recalled Safi.  “It’s just hard. We’re trying to be activists in our own community. I’m just a 21 year old, I hope what I’m doing is making a change and making a difference.”

Activists demanded calls to action, after beginning the event with a dedication to non-political statements. “Our national anthem is a message of unity and pride. We take pride in being diverse, yet unified under the same flag. We may all be different from one another, but one dream we all carry with us is peace in our country,” said Hashem. 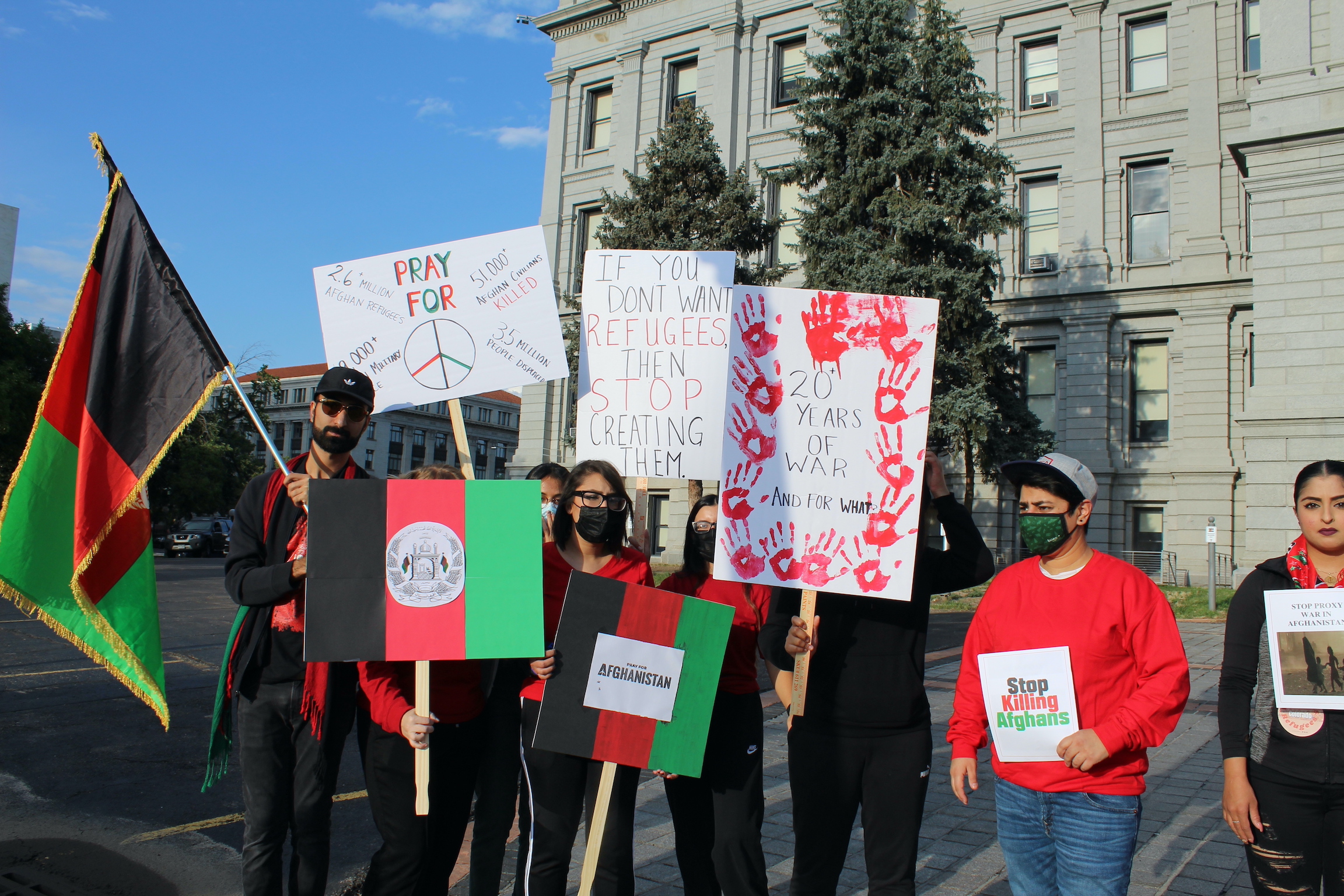 Within a matter of weeks, as the Taliban seized power in cities across Afghanistan, hundreds of thousands of Afghan citizens have fled their homes in search of safety after the exit of American troops following its 20-year war in the country, prompted by the September 11 attacks.

Now, thousands of Afghan citizens who worked alongside the U.S. either as interpreters, intelligence or advisors, and their families, are among the most at risk of facing retaliation from the Taliban.

To mitigate this, the U.S. government began offering Special Immigrant Visas (SIV) to those eligible in 2006. It grants them a pathway to safety and permanent residence status in the U.S. But the application process is lengthy and complicated, with the average processing time taking about 700 days. An estimated 18,000 Afghan allies, and over 50,000 of their family members, are currently in the processing backlog to obtain a SIV.

In addition, hundreds of thousands of families, children, women and innocent civilians now seek refuge in the United States. After the Taliban captured the country’s capital city of Kabul on August 15, following the flee of President Ashraf Ghani, many Afghans are left to fear for their futures. Folks who do not have a pending application to come to the U.S. could be granted humanitarian parole, but this does not offer a pathway to permanent residence and is often taken on a case-by-case basis.

Following through with his predecessor’s negotiations, current President Joe Biden has faced backlash for going through with the withdrawal of U.S. troops from the country. Dubbed the “forever war,” the images that have been breaking from inside the country are crushing. The Taliban stated that it plans to take a more moderate approach to its leadership than before, but Afghans are all too familiar with empty promises.

On August 16, a laundry list of politicians, including Senator Michael Bennett and former governor, Senator John Hickenlooper, signed a letter to Secretary of State Atony J. Blinken and the Secretary of Homeland Security Alejandro Mayorkas. It demanded that they, with the Department of Defense,  create a humanitarian parole specific-category for Afghan citizens most at risk, including women leaders, activists, journalists, members of the LGBTQ community and other vulnerable groups.

On August 18, Governor Jared Polis sent a letter to President Joe Biden, urging him to act quickly on evacuating and resettling Afghan refugees, noting that Colorado is welcome to Special Immigrant Visa (SIV) holders. “Colorado stands ready to provide safety and opportunity to Afghan refugees,” he wrote in the letter.

How Can We Help?

Several local organizations are accepting donations and providing resources and resettlement support for Afghan refugees and asylum seekers including the Metro Denver North Islamic Center, Lutheran Family Services Rocky Mountains – who handed out flyers and resources during the event – Bridges Colorado and the International Rescue Committee.

“I think what people get wrong about Afghanistan is that what happened was inevitable. This has been going on for 40 years, this was not inevitable. I feel like nobody heard us for a really long time, and when they did, it was too late,” said Safi.

A nationwide protest in solidarity with Afghanistan is scheduled for Saturday, August 28, and will begin at 6 p.m. at the Colorado State Capitol.