There’s not much to a good live rap performance – it just works. Traditionally, a microphone and a DJ setup is all that’s needed to convey the message at hand. Nail that, bring some energy, and the audience should be engaged. Adversely, the “through-and-through” band approach to rap has proven overly ambitious for most. Oftentimes, we get live renditions of studio-recorded songs. These include live instrumentation in place of synths and digital drum machines. Colorado Spring’s most interesting quintet, Audible can do it all though. Operating unlike most all of rap’s current landscape, what you see in the studio is what you get on stage.

Frontman HoTT (Melvin Shaw) and Jeb Burgess possessed a joint vision in humble beginnings. Nearly a decade ago, the pair were driven to carve their own lane after attending series of shows in Colorado Springs. Aiming to “appeal to the masses, but satisfy the minority,” the two began assembling a squad of diverse, creative minds. Years of radio shows, national stages and showcase features followed, as well as internal changes, but Audible seems as comfortable as ever. 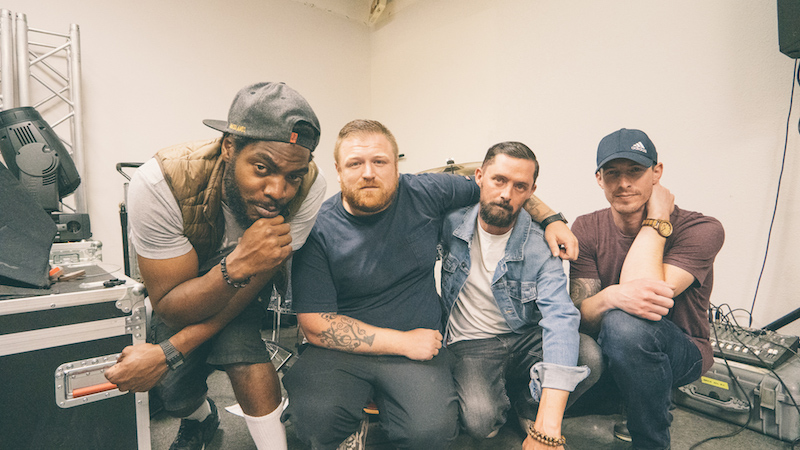 Shaw is an eccentric, high-energy voice leading the charge. Burgess runs freely alongside his frontman, manning primary guitar duties. Drummer Ryan May, like any great drummer, serves as the essential backbone. Newfound members Ty Bishoff (keys/guitar) and Patrick Malone (bass) add flavor and depth to the formula. The wide array of experience and style, Malone tells me, drew him to Audible and made him feel at home.

“We’ve all been in different bands and groups or performed in different spaces. With Audible, there’s a level of freedom I haven’t personally experienced before. No matter what each of us wants to write or contribute, there’s a place for it.”

The formation of Audible is vast — so too is their musical influences. When asked which artists they revisit for inspiration, each bandmate goes down the line — Lauryn Hill, Adele, Stevie Nicks, Atmosphere, Brother Ali, Eagles, Fleetwood Mac, Incubus, Britney Spears, Bee Gees, Blink-182, Amy Winehouse, Umphrey’s McGee, Chan Kinchla, Mos Def, The Roots and Black Thought. These are connoisseurs stretching eras, genres and philosophies. No idol goes unnoticed — “We say all those names, and you’ll go and listen to our music and hear a bit of every single one of these influences somewhere” says Burgess.

Shaw chimes in, wholeheartedly agreeing with his co-founder’s observation.

“If you’re into hip-hop or the blues, if you like folk or soul or country — whatever it may be, we’ve got something for you. We’re thankful that we get looks from exotic stages or events. All sorts of tastes come together to enjoy us as a group — I guess you could say it’s all one medley.” 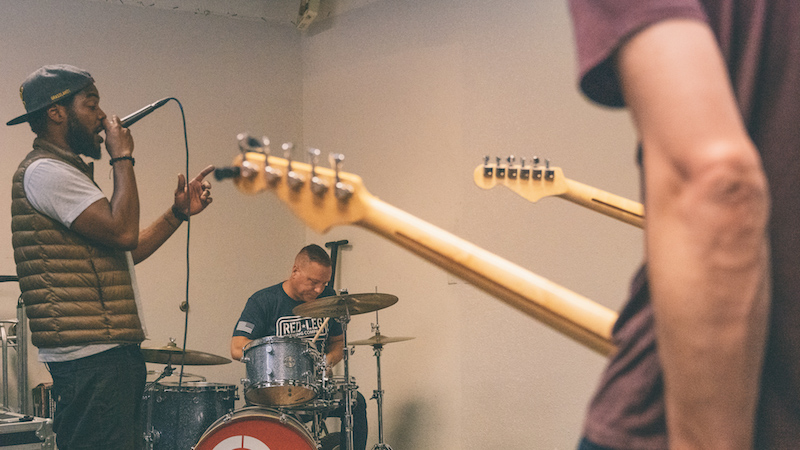 Of all the aforementioned names, one, in particular, resonates particularly strongly with the original band members. The Roots fill every nook and cranny with natural instrumentation and conscious messaging. For Burgess, it was a catalyst.

“They’re one of the biggest reasons why I took that next step to getting Audible formed. You didn’t see what they were accomplishing within the hip-hop realm. It was always a DJ and a performer. When I saw a full band, I knew that’s what we were gonna do.”

Playing outside the box isn’t the appropriate term to use here — there’s truly no box to begin with. In turn, Audible’s refusal to let a singular genre pin them down has paid dividends. In 2018, their submission to NPR’s Tiny Desk stop in Denver caught eyes and ears. NPR music host Bob Boilen praised Audible for their introspective lyrics and approach to rap. Shaw explains how important this was to be recognized, and sees the similar results in booking gigs.

“We can get booked with just about anybody to play a show, and people seem to respond to it. We’ve opened for a bunch of different types of music, even some living legends like we opened up for Warren G. It’s so hard to pin down what we do as one genre — there are times we exhibit elements of post-prog-rock, then we revert to acoustic and straight hip-hop.” 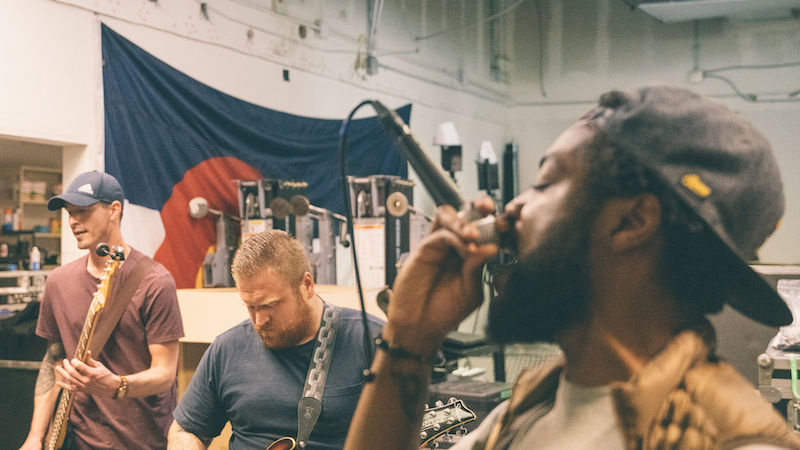 The latest gig they’ve signed onto, The Underground Music Showcase (UMS), is maybe the group’s biggest. It’s been a long time coming says Burgess, who explains how “we had to turn down their offer in 2019 due to timing conflicts, and then 2020 happened — we’re super hungry for it this time around.” Shaw is as excited as he is thankful for the opportunity — “It’s dope to have them say they want us back at the festival. We’ve been looking forward to this for almost three years.”

At UMS in Denver, the band will get a chance to show off their progression and changes that have been made since previous performances. These evolutions, Burgess outlines,  have taken place between their debut LP, First Contact, and its soon-to-come follow-up — Castor Pollux (the latter of which’s lead single, “Verbal Deluxe,” is out now).

“First Contact used a lot of piano riffs based around Brandon, our key player at the time. Since he’s stepped away, we’ve become more guitar-centric. Ty is so good at painting a background for our songs, and Patrick’s ability to play the five-string brings an entirely new dynamic with that low-end C note. It’ll be exciting to display those things on the next album.” 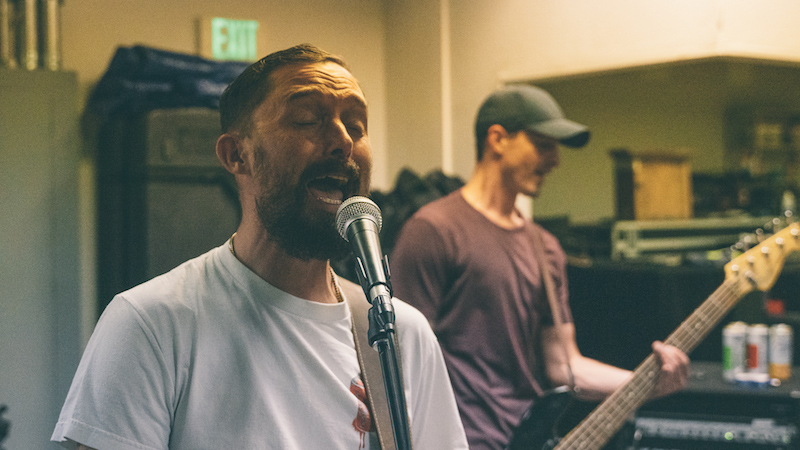 Bishoff too believes their soundscape has found different footing in more ways than one.

“I’ve noticed a newfound heaviness in our creating of the new project. Not exactly a more full sound, but a noticeable use of heavier sounds — distorted guitar, lots of delay and reverb.”

Audible, as an entity, is one-of-a-kind in composition, location, and outlook. Still, they have their take on Denver’s rap scene at large — most of which is positive. Evans calls upon their first big break with NPR as being a testament to Denver’s support of the arts and hopes other groups can find shine in innovative ways as well. “There are opportunities all over this city and this state. Take it from us — four-fifths of our group is based in Colorado Springs.” 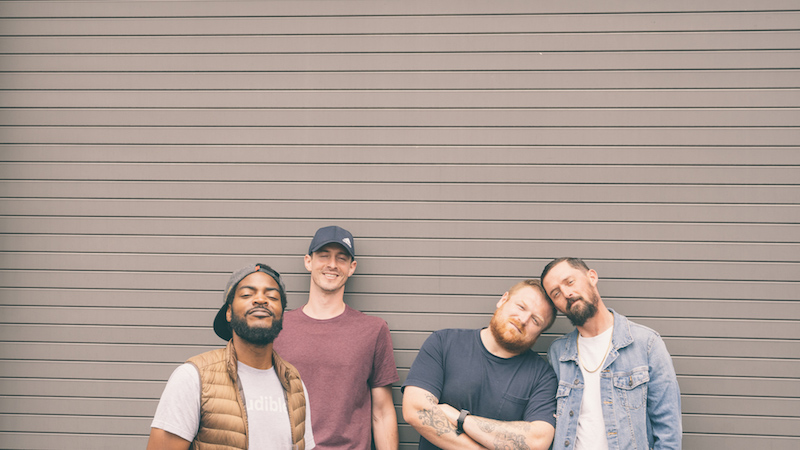 Sure, Audible’s presentation skews more towards that of hip-hop, but calling them anything else besides an indie collective would be a disservice. Their musical spectrum stretches far too wide to be squeezed into one genre. They live and die through individuality by way of collaboration — praising the beautiful city that has put them on a pedestal to be themselves. “Whether it’s audibly or visually, Denver’s a great hub for indie arts. We’re just trying to ride that wave. It’s all around been a great time for us to re-research and present ourselves again.”