The “basement,” as a general entity, floods the brain with nostalgia. For many, memories of sleepovers and late-night playdates, movies with family and friends, and subtle get-togethers warm the soul. Distant recollections of playing Rock Band or Guitar Hero with friends can makes one smile ear-to-ear — rocking on plastic instruments in a subterranean slab of concrete.

Now, imagine that same half-finished basement, but this time, picture real drums, guitars and microphones, audio equipment, cameras, stage lights and a vividly colorful set. In the heart of Denver, there exists such a place, and roommates/coworkers Jason Edelstein and Andrea Hoang brought it to life. Last summer, this duo created The Salt Lick Denver — a musical collective aiming to spotlight Denver’s unique indie music scene through live sessions. Since then, they’ve built their playground — “The Pond” — and brought on sound engineer Chris Voss and assistant cinematographer/engineer John Baldwin as team members, before finally introducing the space to musicians across the city. Rest assured, their vision has gained momentum — Edelstein explains how.

“If a band comes in and plays, they get their entire audience to watch that session. A lot of those audience members end up sticking around with us and watching another band session or checking out the other bands that the Denver music scene has to offer. It’s been a great way to digitally tie this particular scene together, and amplify it out to a national level.” 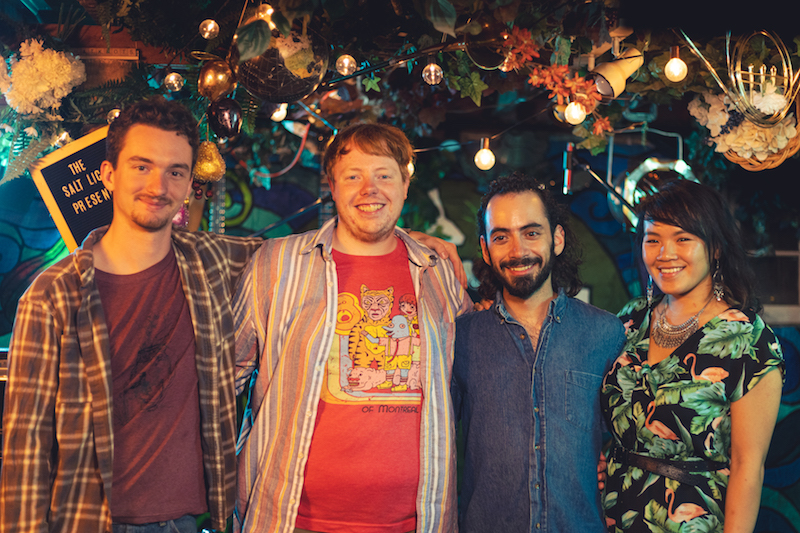 As of present, The Salt Lick team has hosted live sessions on a once-a-month basis, entitled “Songs From The Pond.” This begs the question — how do they decide what band to feature?

“Lots of times, it’s through discovery and recommendation between us and other members of the crew. Recently, it’s been nice to see groups perform in person — this helps us digest how a band performs in a live setting. Additionally, consuming features through local publications gives us an idea of what’s dropped, or what is upcoming.”

Edelstein goes on to tell me that they plan on continuing the month-by-month format, and for good reason.

“The amount of work that goes into one session is immense, from the recording to the mixing and mastering and editing, even more minute details like color correction — the post-work comes out to a two-week process. Right now, we’re highly focused on establishing a physical presence in Denver’s musical community.”

Deep into our conversation, the pair offered to give me a tour of “The Pond.” As they descend the stairs, a washer and dryer set immediately catches my attention. Edelstein tells us it does for everyone. “When bands see the sessions, they usually envision a large recording space. Then they come over and the first thing they see is the washer and dryer, and say, “wow, this is really just your basement.” It’s that exact moment of realization that gives The Salt Lick its greatest asset — relatability.

“The best part of recording here is the comfort that comes with it. Most musicians are used to playing in basements — it’s a very non-intimidating atmosphere. It lets these artists pull away from the sterile, typical studio setting and brings a homey feeling. That works in our favor, as well as theirs.” 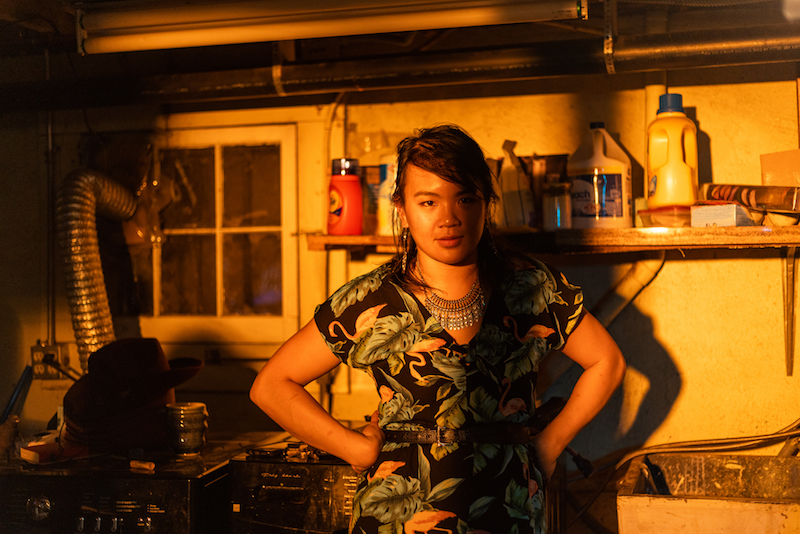 Andrea Hoang in front of the washer/dryer

Turning a corner past the washer and dryer reveals the lush, bright studio that is “The Pond.” An aptly fitting painting of a toad on a lily pad covers the back wall, and lights pierce through the rafters and onto the instruments laying on a carpet. Polaroids of previous performers cover the column that keeps the basement from collapsing, and, tucked away around the corner, is a set of speakers, audio editing tools and a computer, all used for post-production. Hoang is the artist mastermind behind the basement’s appearance, and having it all come together in unity was a triumph for her.

“This was definitely a “ground up” project, or a “below the ground up” project to be exact. I started with our “damp dungeon,” cleaned it up, and painted the walls white — probably inhaled some asbestos. I’m not sure. It was a really fun endeavor just to have that giant blank canvas in the back and start filling it out with colors.”

Since its inception, Hoang explains how knick-knacks and remnants of performances have filled up the studio, acting as artifacts of the bands that have contributed to The Salt Lick’s growth.

“Each session has its own little easter eggs. Our most recent one was more of a rodeo cowboy theme. So you know, we’ve got cow skulls and cowboy hats and a little mini piano in there. We try to personalize it a little bit every session or include something fun to watch out for in the background.” 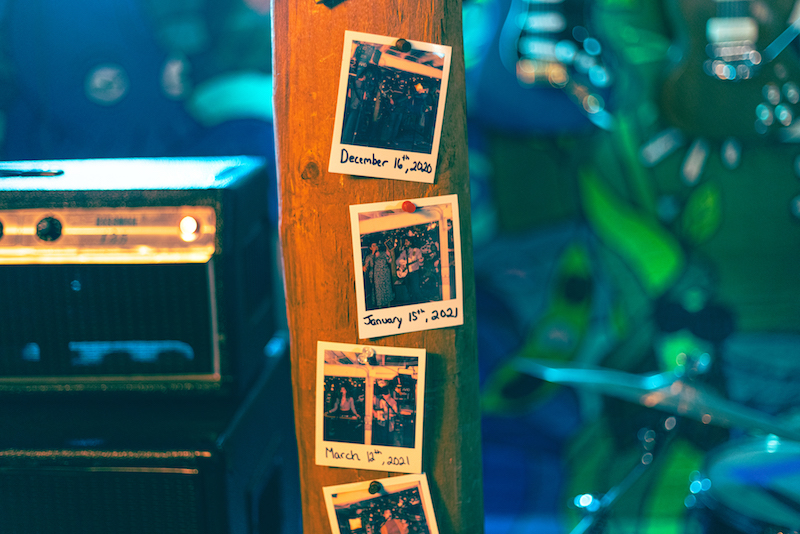 For all its benefits, recording in a makeshift basement certainly has its challenges. The biggest, Edelstein says is “bleed,” or the occurrence of unintentional mixing as a result of having the sound from one instrument picked up by the microphone of another. “That’s just what you get when you play loud instruments in a small space.”

This, however, is where sound wizard Chris Voss comes in. As the team’s audio engineer, Voss takes the raw recording and transforms it into something beautiful — it’s a challenging task that takes steady hands and a mind for music.

“It’s unbelievable what [Chris] can do,” remarks Edelstein. “I’ll throw a rough mix together just so I can start editing, and I think to myself, “this sounds pretty good.” Then Chris sends me his mix — every time, it’s a “holy shit” moment. Like, ‘how’d you get it to sound like that?'”

It’s this kind of teamwork, that, for lack of a better term, makes the dream work. The group relies on vision, and ultimately execution as means for creating the best possible environment for creation.

“We’re built for live performance, which is something that has become really popular as of late, especially during the pandemic. It’s beneficial on both ends — bands will perform live sessions of new and upcoming projects, and likewise, fans have a chance to see how said band performs live before deciding whether they’d like to buy tickets to a show.” 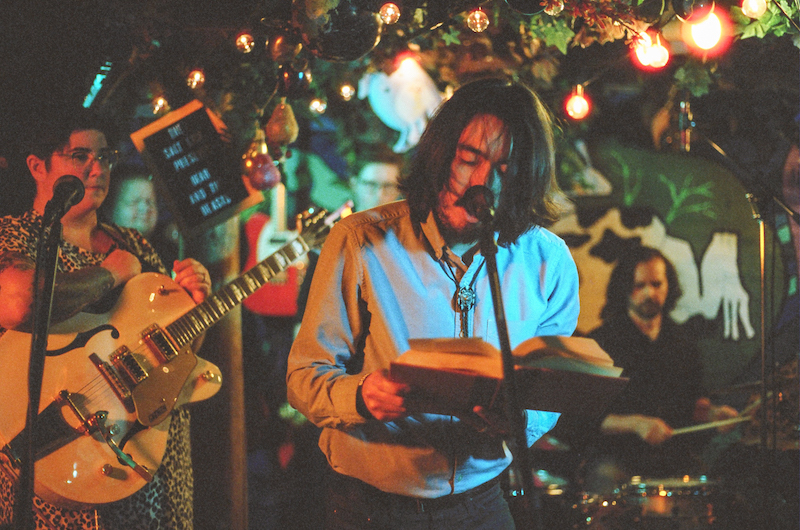 Bear and the Beasts performing at ‘The Pond’

The Salt Lick Denver and their recording area, “The Pond,” are truly a reflection of Edelstein’s vision of what Denver’s music scene is, and can be.

“Everyone knows about Red Rocks, or the EDM and jam bands. What most people don’t know is our incredible indie music scene or the Underground Music Showcase. My first time going to that was mind-blowing — every group I saw blew me away. There’s a great opportunity, right now, to bring attention to these types of music, because the quality is already there.“

Edelstein couldn’t be more correct, and he elaborates further on this statement. Denver’s sonic landscape thrives on quality, as well as comfort — two things The Salt Lick hopes to amplify through their own work.

“Venues across the city just feel more supportive of the acts they’re hosting than other cities. I’ve played in Philadelphia and New York City — it’s a great atmosphere, but the venues don’t do much beyond telling you your showtime and throwing you into a setlist with random groups, let alone doing any sort of promo. In Denver, it’s different. There’s a strong sense of community and artistic support here.” 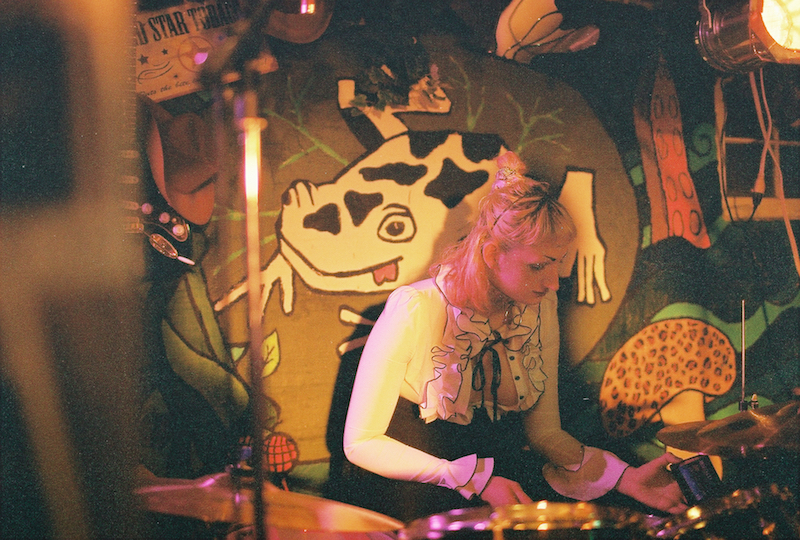 Now, with a number of live sessions under their belts and eyes set on the future, Edelstein and Hoang both explain their plans to reach farther alongside hosting performances.

“Right now, we’re in the process of building a record label. It’s a huge part of what we’re doing — being in-person at shows, promoting the bands we represent, etc. On top of that, we’d like to offer in-house services pertaining to video and audio production. Those things aside, with everything opening back up, we feel it’s important to get out into the scene in a physical sense.”

Being present and active is paramount for The Salt Lick. Recently, Edelstein says they were able to see their first official live session, Immigrant’s Child, performing in person. “Just seeing the reactions from the crowd — the smiles and the cheers, it gave us chills. It’s great to be back out there.“

These are emotions that they share with the rest of us. What they may not realize, however, is that — from their little underground studio — they’re producing and inducing those same feelings for listeners and bands alike. That, in and of itself, makes The Salt Lick’s mission a success.