Last weekend, Parker, Colorado put itself on the fashion map, as it hosted its first fashion show,  Parker Fashion Week, at West Main Taproom and Grill.

Between Friday and Saturday, the two-day event attracted an estimated 500 guests and developed a diverse cast of models that celebrated a variety of body types, ages, races and backgrounds. The taproom transformed its 10,000 square foot patio into a full stage runway with a grand fireplace seated in the center and featured a dynamic cast of designers and local boutiques.

The theme, “Hope + Humanity,” aimed to prioritize time to connect, celebrate and recenter focus on the arts and fashion community in Parker — and that’s exactly what it did. 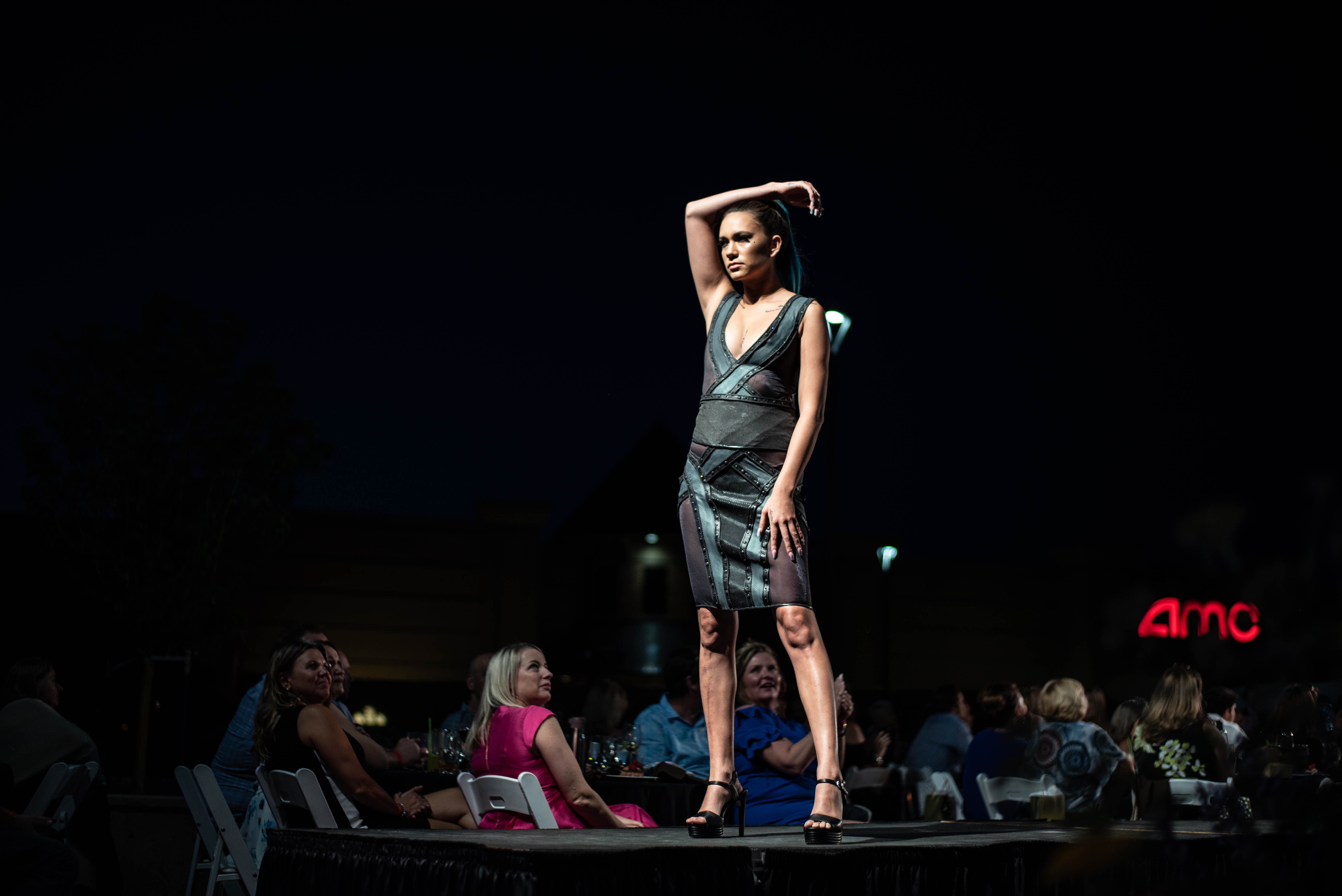 Friday night’s performance was electric. From the lighting to the audience’s energy, the show was nothing less than fantastic.

Unfortunately, Saturday night’s event did not go as smoothly.

Pioneering Colorado’s “first outdoors fashion week,” PFW not only set the stage but also learned from its youthful shortsightedness.

Sporadic rain and lighting on Saturday night forced the audience indoors while the crew backstage brainstormed solutions. After a three-hours of waiting for the weather to settle, Parker Fashion Week let West Main Taproom’s team do what they do best — improvise, and resume the show indoors. After all, the show must go on. 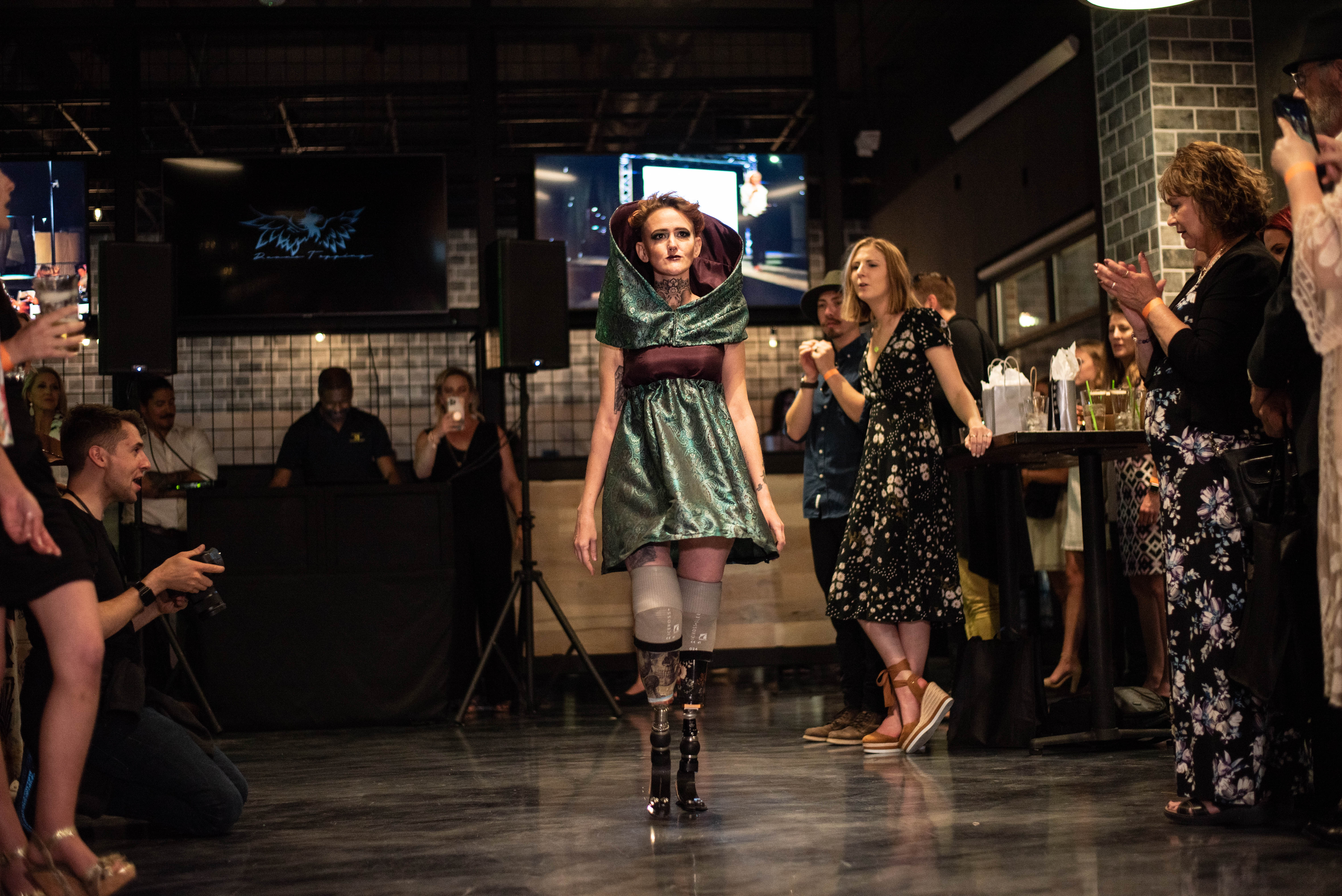 Designers, Mondo Guerra and Duane Topping were scheduled to show their collections on Saturday, but only one chose to walk their collection. Despite the unconventional circumstances of presenting a luxury collection in a restaurant, Topping did it anyways.

His collection featured caged crinoline skirts, exaggerated collars and lots of skin which embodied a sense of futuristic sex appeal, which lit the crowd on fire. But if you’ve seen his shows, you know the designer is all about igniting a crowd. Followed by his collection was Topping’s signature heavy-metal performance which brought out an insurgent response from the audience after a disappointing delay in the show. Not only did his tenacity and optimism transcend to the crowd, but to his models, who dedicated a lot of time, effort and energy into moving forward their careers.

A model in Topping’s show, Trinity Thomas, shared her experience at Parker Fashion Week and how it impacted her career:

“I was so honored to have the opportunity to walk in PFW’s inaugural year and I hope to be able to continue my involvement with PFW as this event grows into its potential over the next decade,” she said.

It Takes a Tribe

It takes a village to achieve a goal and there were many key players in the success of Parker Fashion Week, especially the crew members backstage, which included models, makeup artists, boutique owners and design teams.

Some team members even traveled from out of state to be at Parker Fashion Week. Develop Models, a modeling agency in Omaha, Nebraska, flew in for the week to manage the cast of models throughout the course of the weekend.

Additionally, The Stacy James Institute, a beauty school in Parker, volunteered students to do hair and makeup on Saturday for models who needed it. “Those working in the show and behind the scenes were who really made that theme a reality,” said Colorado-based model, Alyssa Reifer.

Equally as important as the backstage crew was West Main Taproom’s staff, which kept the event alive by providing outstanding service. “The West Main Staff maintained the show’s energy by providing exceptional service throughout the delay,” said Walter Blunt, a local designer from Denver.

Transforming Parker Fashion Week into a reality depended on every single person involved. As a result of those combined efforts, the show was an undeniable hit.

When asked about her overall experience of the show, Parker Panache owner, Brenda Zdanowicz, said that “Everyone — the chef, the DJ, the wait staff, the models and store owners — brought their best to create what I will always remember as a magical night.”

Like other industries, the fashion community was hit hard by the pandemic, which left the careers of models, designers, photographers, and stage producers on halt. Not only did Parker Fashion Week provide a safe space centered around self-expression, but gave everyone involved the opportunity to reconnect with their careers within the fashion world.

Djeffery Daphnis, another model featured in the show, shared how Parker Fashion Week empowered his career.

“The weekend enabled me to network with fellow models who were so kind and talented, designers who were inspirational and creative and planners worked tirelessly to make this event a reality,” said Daphnis.

In two months, the owner of West Main Taproom, Pamela Briere, used her connections with the fourth largest fashion week in the country to put on an extraordinary event for a town that stood behind her restaurant throughout the pandemic. Not only did this event shine a light on Parker’s blossoming creative scene, but it inspired an entire community of people to be resilient, and more importantly, to be themselves.

When asked about the origin of starting Parker Fashion Week, Briere’s answer was simple.

“After a really hard year, this how I say thank you to Parker for rallying around West Main,” she said. “Parker Fashion Week is the cherry on top.”