Colorado is home to a variety of artists and entertainers, including noteworthy individuals within the rising drag scene. Not everyone is aware of exactly what it takes to be a drag entertainer – drag is much more than getting dressed up for an audience. For drag entertainer Jessica L’Whor, it’s a community and a lifestyle.

Zachary Sullivan, better known as Jessica L’Whor or Miss Jessica for all-ages audiences, is a philanthropist, MC, producer, drag artist and entertainer in Colorado. Her drag journey began at Colorado State University where it started as a hobby that has evolved into what is now a full-time job. 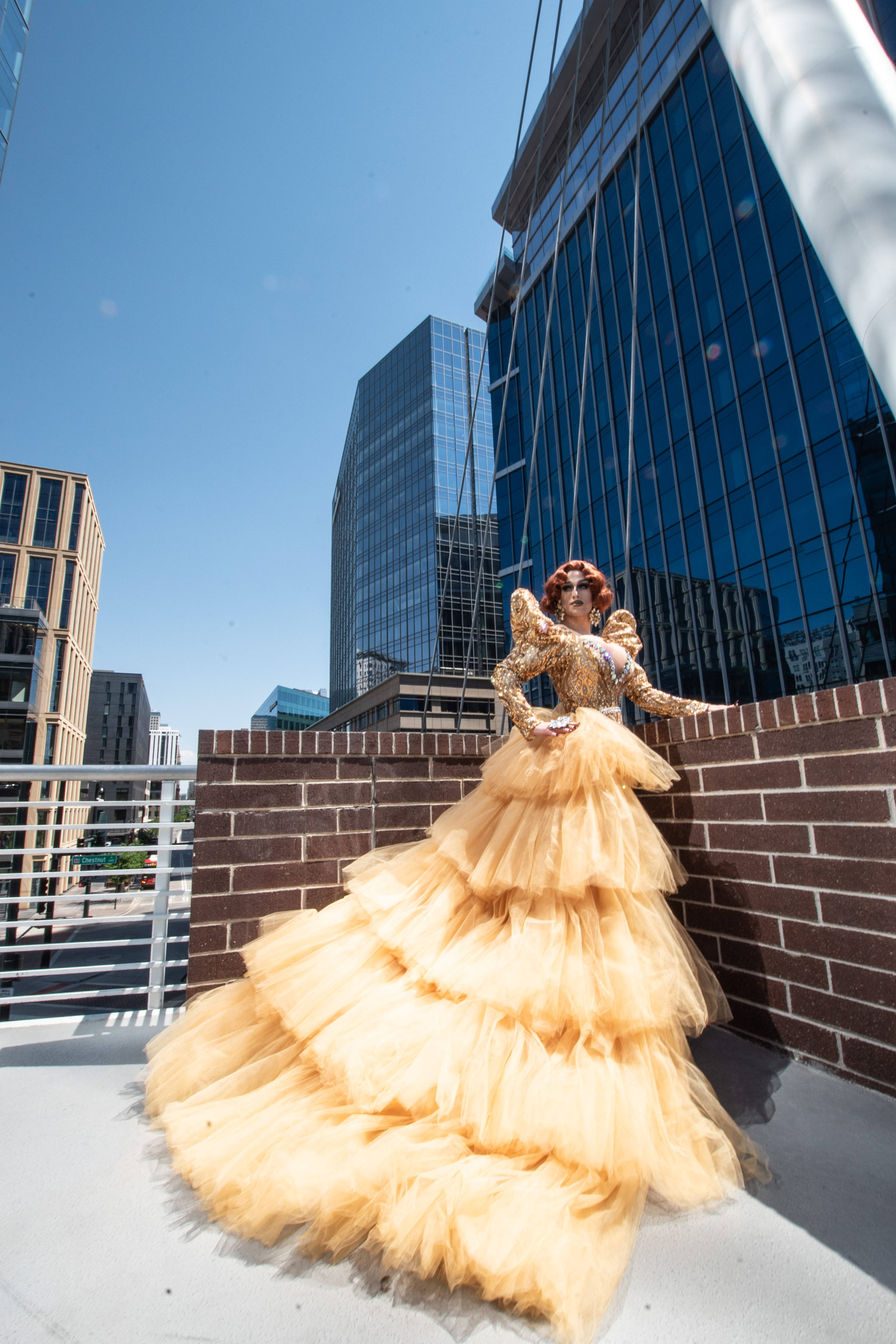 At the start of Miss Jessica’s career, “drag was kind of used as a mask for my insecurities that ranged from body dysmorphia and eating disorders to just a lot of depression and self-hatred,” she said. Therefore, she initially kept her personal life and drag very separate. Over time, this has evolved to where drag has become an integral aspect of her life.

Now, “the only difference that you’re going to find between Jessica L’Whor and Zach is really I’m on a microphone,” she said.

While the beginning of Miss Jessica’s drag career was difficult, support from the drag community at CSU helped her grow. From starting out doing only a few shows a month, she began to perform more and eventually drag became her full-time job.

“I ended up going from watching the CSU drag show and performing in it once and being terrified, to producing it for three years and making it a huge production, bigger than it ever had been, to then MCing it the last couple of years as an alumni. So, it’s been in my repertoire since the beginning of my career in so many different stages and … it’s like my baby almost. It’s just my favorite thing,” she said

Although the drag scene in Fort Collins was small at the time, Miss Jessica performed whenever she could. From benefits to Pride, she jumped on any opportunity to try different looks and network with fellow drag entertainers. She began to form valuable connections and relationships with those in the Colorado drag community. 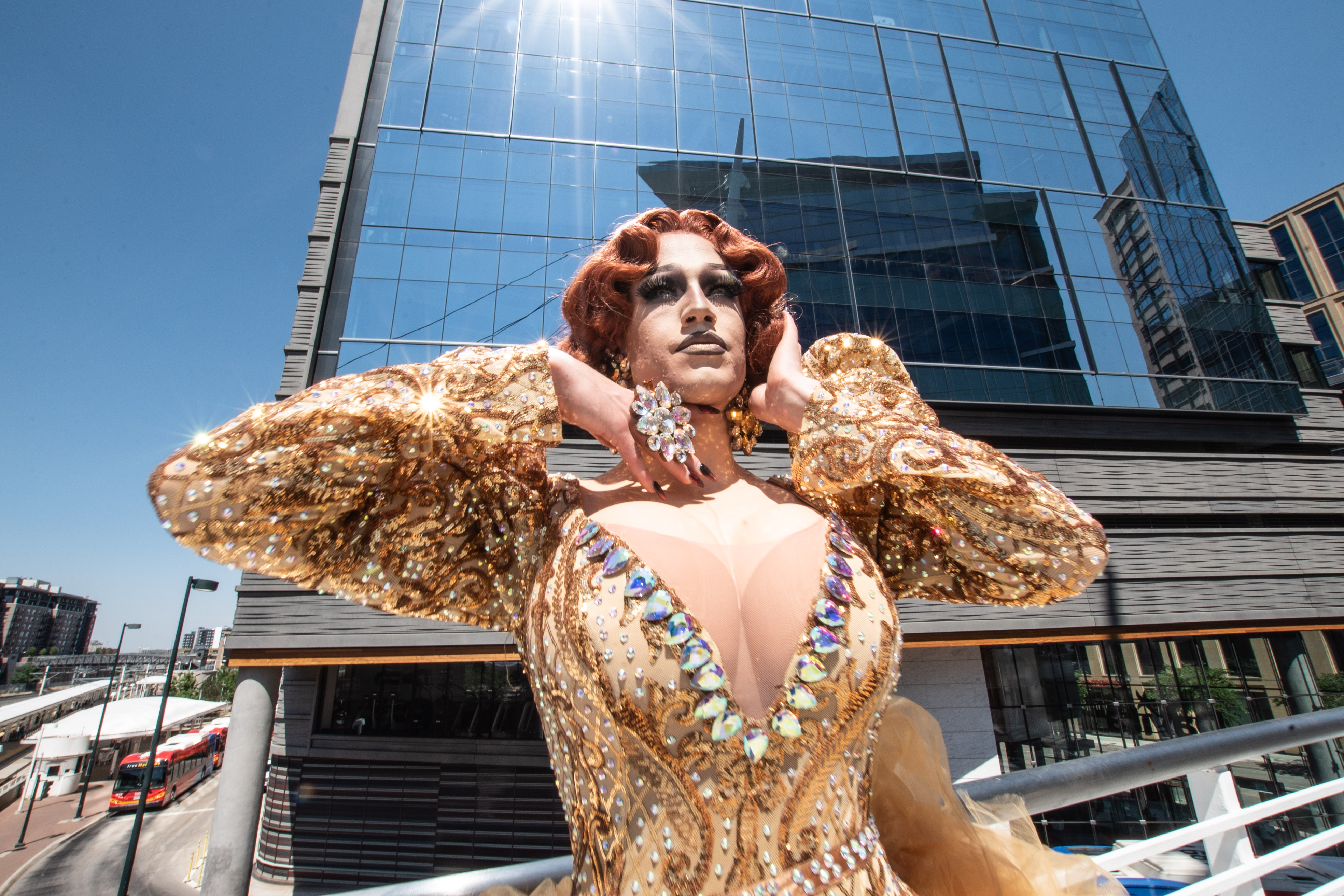 At one point, she ventured into Denver for opportunities. “For the first three years, not only was I like a full-time student and doing drag and working, but three nights a week I would drive back and forth from Fort Collins to Denver,” she said.

This led to Miss Jessica’s first hosting experience at Aqua Lounge, where the host stepped down and she stepped up. “That was my first time on a microphone and she said, ‘You’re gonna do this.’ And it was amazing, and ever since then I started building my rapport of jokes and … go-to messages” she said.

With an academic background in business, Miss Jessica became a powerhouse in the Colorado drag scene. She runs her drag with a business-oriented mindset that includes knowledge of budgeting, networking, communication and production. As a result, “it’s been like six years producing events and it’s something that I would not trade for anything in the world. It’s a job that doesn’t feel like a job because I wake up excited about it every day,” she said.

Miss Jessica has produced a variety of events throughout her career thus far, including drag shows at CSU, the first-ever DIVA (Drag Initiatives and Variety Award) Awards Ceremony, Colorado Drag Days and more. She also produced an event called “Snatched!” where audience members paid to make playful fun with the drag entertainers.

Another unique show that she was a part of was The Drag for All Ages show. “For one year we did a show for kids from 3 years old and up and it didn’t matter how old you were, we raised money for The White Rose Foundation,” she said. The show was “for kids that were not even queer or could be queer or could be trans, they just came out and did their thing. Those are the types of things I want to be known for and continue to do. Those are the impactful things.” 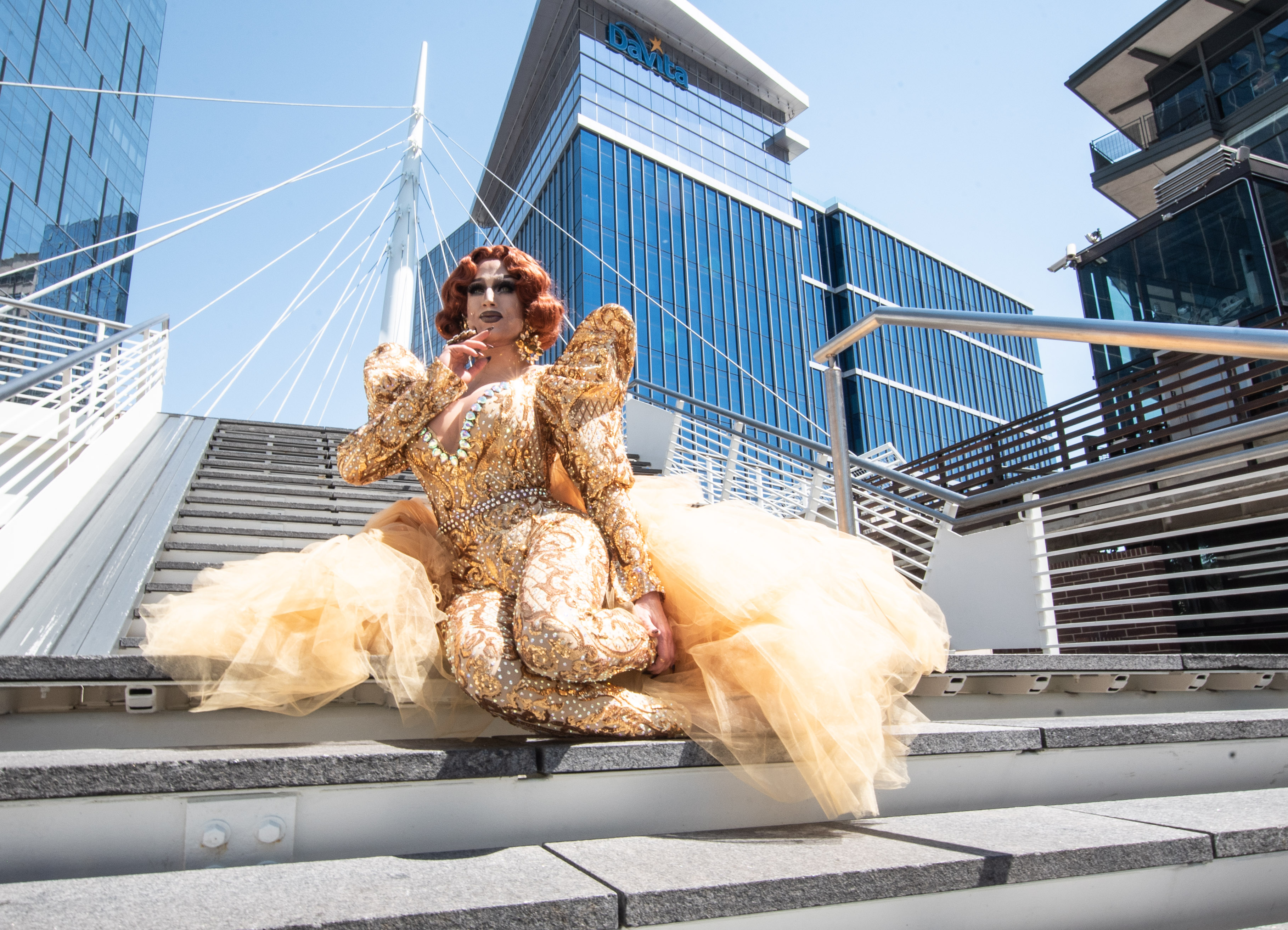 Fundraising is very important to Miss Jessica and fuels her drive to give back to the community through drag. “Everything that I do in one way, shape or form is going back to a community resource,” she said. Proceeds from her merchandise sales are donated to organizations including the National Breast Cancer Foundation, The National Center for Transgender Equality, the Work Options for Women, The Dru Project, The Trevor Project and more. She has also participated in yearly fundraising for the victims of the Pulse Nightclub Massacre. While it is not always apparent to the public, a major aspect of drag is the connection to a philanthropic foundation for entertainers to give back to communities in need.

According to Miss Jessica, one word to sum up her experience of drag would be irreplaceable.

“I’m one of those people who would not be here without drag being an outlet for me, regardless of opinions about me or what I do or how I do it. I’m very thankful that because of drag, I’ve met people that have helped save my life, helped build me up in my lowest points. Which has allowed me again in that circle of life moment to do the same thing for other people directly. When I get messages that they’re like ‘Because I went to your show, I chose not to take my life that night.’ It really makes you realize that there’s a bigger reason behind what you’re doing. And it’s an experience that is completely irreplaceable to anything else that I’ve experienced in life,” Miss Jessica said.

The Colorado drag scene is a hidden gem compared to larger cities known for drag entertainment. There’s an abundance of talent that often goes unnoticed or underrepresented. As a result, there is also fierce competition among the drag community.

Miss Jessica is hopeful that the absence of performing during the COVID-19 pandemic will help members of the drag community come together more than ever before. “People are going to realize that they’re going to run into each other and you know, you can’t control the spaces that people go into and you also should not be controlling the spaces people go into if they feel like they’re safe there,” she said. 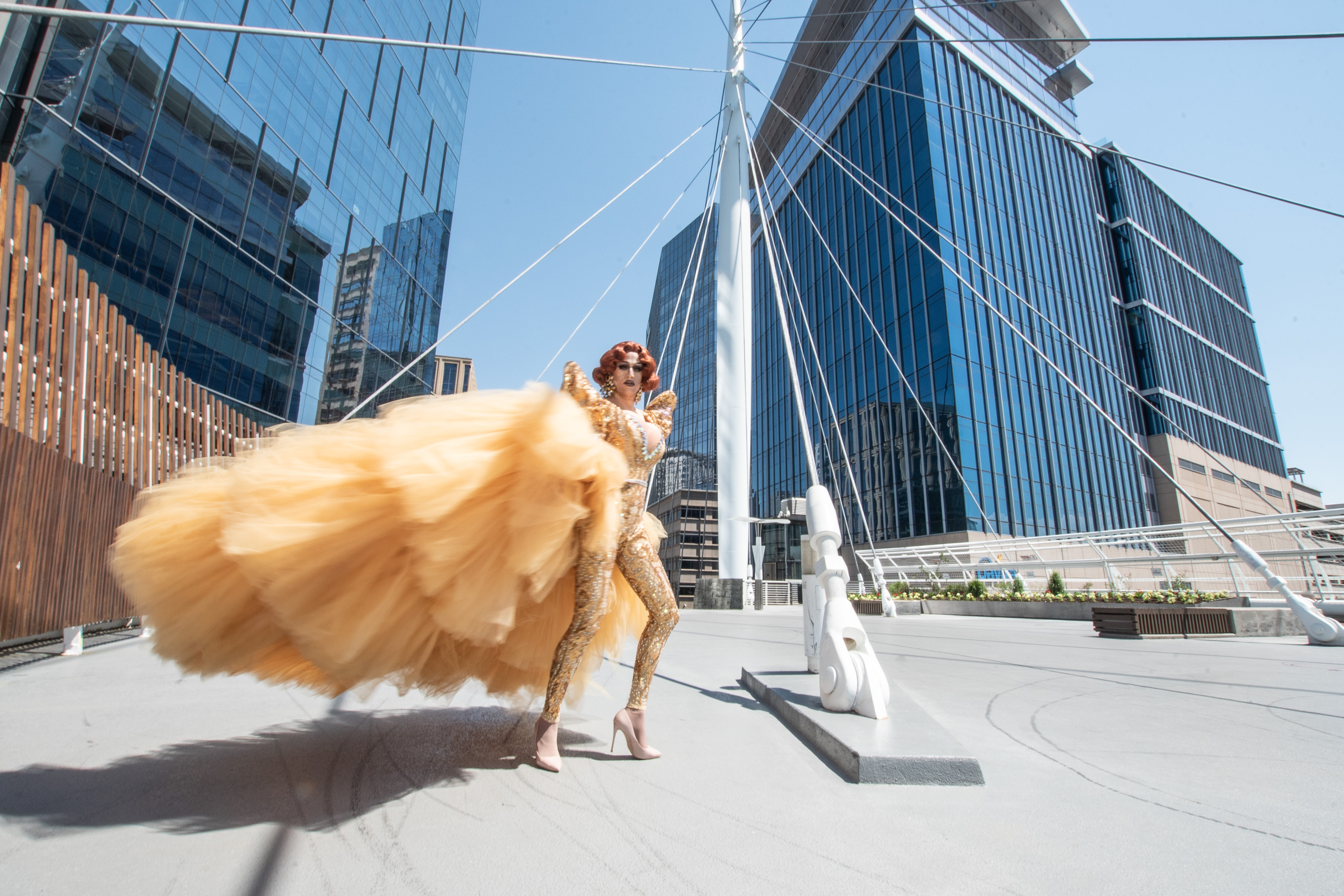 As a full-time job, drag looks different than most people would expect. Miss Jessica performs near-daily, often twice a day and her shows typically look different. However, she loves what she does, so daily performances are exhilarating.

“I will make anything and everything work. I’m a hustler, I’m a workhorse, every show is an opportunity to meet people, to experience something different, to try something new,” she said.

Ultimately, “I take on as much as I feel like I can handle and I want because it’s just how I run my business, it’s how I like to do things. I like to work. I love working, I love the opportunity,” she said. As a result, Miss Jessica has noticed that other entertainers have followed suit. She is proud of how far she has come and the experience has been rewarding. With COVID-19 restrictions loosening, the future is bright and she is excited for what’s to come.

When the pandemic struck, Miss Jessica was on a 30 city tour across the United States. She was forced to cancel a majority of the tour; therefore, her next step is “ a goal of doing a 50 city tour, one of them being international.”

Despite the lack of performance opportunities during the pandemic, Miss Jessica still kept busy. Three years ago she wrote and produced a song and she has been working on a music video and fashion line to go with it. She is also brainstorming ways to expand her reach as an entertainer and producer in order to improve the drag community.

“I always compare drag and the cooking channel as like a similarity of cooking art. You have cooking exploration, you have cooking testing and competition and all you have right now is competition with drag race. So, what are those other outlets out there to find other ways to expand your platform?” she said.

Part of expanding the platform is thinking outside of the box. Miss Jessica wants to become someone who manages other drag artists. She also plans to bring back DIVAs and the Drag Days competitions for 2022. She has numerous other plans for competitions and initiatives in the works as well.

Though these sound like big goals, Miss Jessica is known for keeping her word. “I’m super proud of and passionate about and other people have noticed this, that when I say something and I speak it into the universe … I will make it happen,” she said. 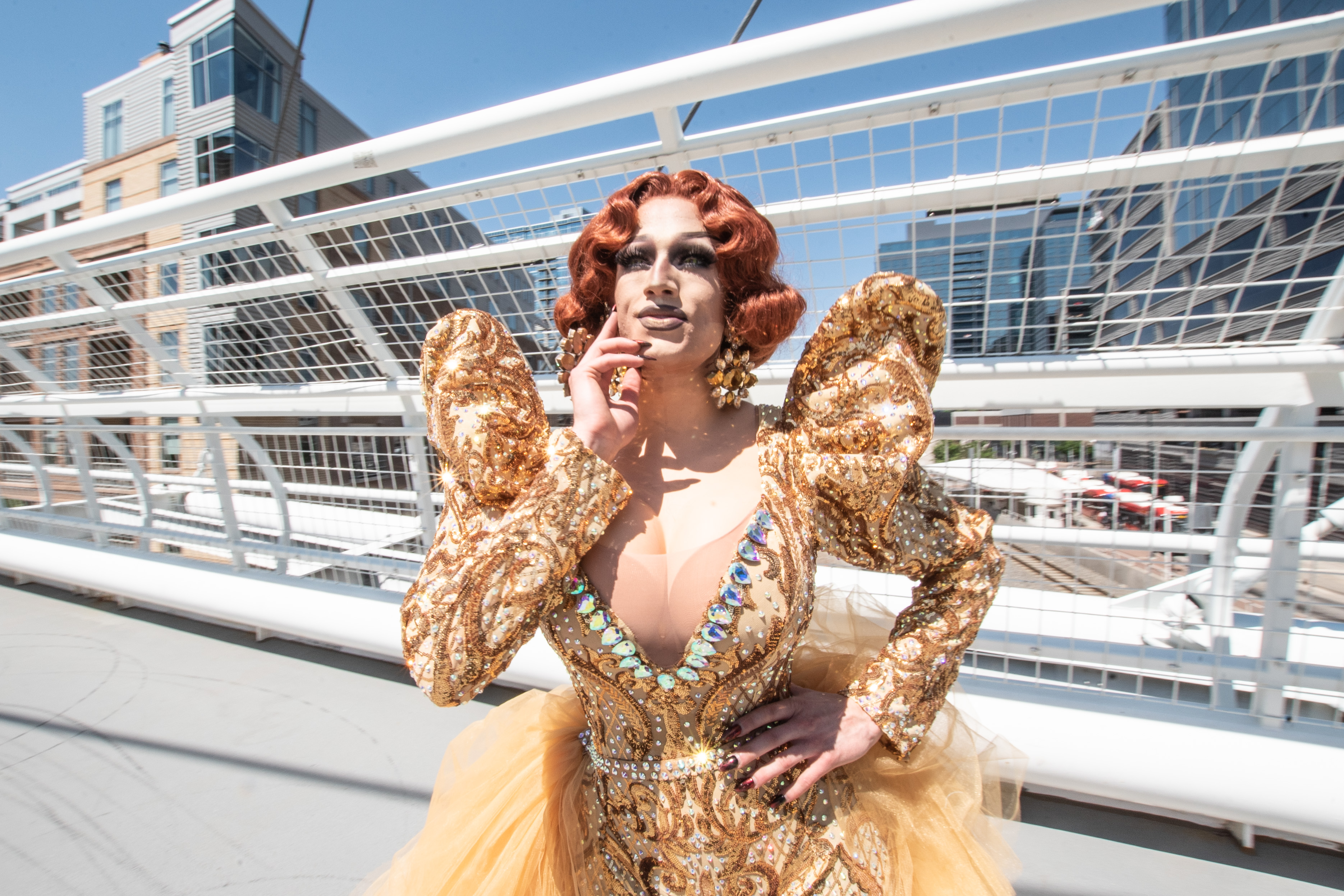 Miss Jessica’s story is important in displaying the ways that drag can change an individual’s life for the better. She encourages everyone to try it at least once; whether that be attending a show or performing in one. Drag itself is unique because “it doesn’t matter your sexual orientation, your race, your gender, how you present, your size, your economic status, drag is for everybody,” she said. “And if you haven’t tried it, kind of like sales at a mall, it kind of sucks at first, and then when you try it and you kind of get used to it it becomes easier. Everyone should give it a try once because you’ll learn so much about yourself.”

Check out Miss Jessica’s Instagram for upcoming projects and events, including The Colorado Drag Excellence Video, featuring 72 entertainers in one music video recorded during lockdown with COVID restrictions.