Photo by Colorado Department of Transportation

The largest, and one of the most controversial, infrastructure projects in Colorado history is going down, literally.

After years of research and planning, the Colorado Department of Transportation’s (CDOT) $1.3 billion Central 70 Project is nearing its completion. Demolition of the 57-year-old viaduct will begin this weekend and continue over the next five months, according to communications manager Stacia Sellers. Drivers will mostly be blocked from seeing the demolition, but Sellers says CDOT urges motorists to continue driving and avoid creating congestion and unnecessary traffic.

The Mile High Shift – which reads like a complicated surgery – will move both directions of I-70 between Brighton and Colorado Boulevards off of the current viaduct into a lowered, eight-lane, 30-foot underground tunnel that’s estimated to drop through 1,000 feet.

Beginning Monday, drivers can expect to shift into the new lowered section of I-70. “It’s not going to be a sudden drop, but it is going to be at a completely different elevation,” cautioned Sellers.

I-70, as all Coloradans know too well, is best to avoid, if you can. The infrastructure has deficiencies that require incessant taxes to fund maintenance repairs on potholes and resurfacing projects. It’s been deemed Colorado’s most dangerous highway, and even ranks among the worst highways in the nation. The Central 70 project establishes better safety measures, added Seller, noting that the project will accommodate more shoulder space to pull over if there’s a crash or a car breaks down. 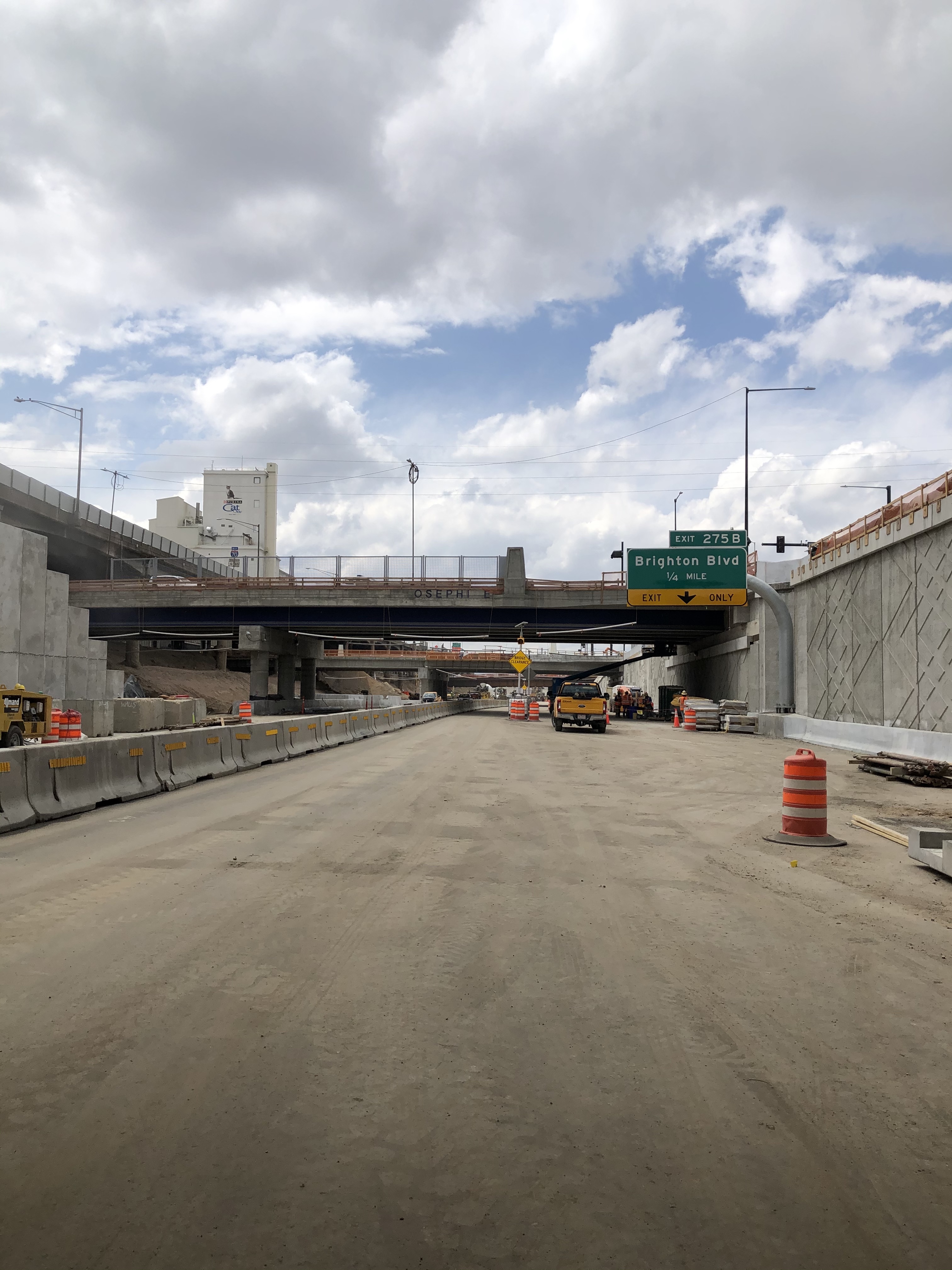 Photo by Colorado Department of Transportation.

Originally built in the ‘60s, the construction of I-70 split the Elyria-Swansea community in half due to a lack of federal regulation, like the National Environmental Policy Act (NEPA) which requires all transportation departments to gather public input and environmental studies before construction. “We’re trying to reverse some of those wrongs of when I-70 was originally built. As we were talking to residents, they referred to I-70 as being a scar on their community,” said Sellers. “As a result, they wanted to see that section put underground.”  However, it’s important to note many did not want this solution. Since the area surrounding the project has been home to superfund sites, there have been many concerns of the negative impact on the environment and the health of nearby residents created by digging into polluted soil. Additionally, this area already faces a legacy of extremely poor air quality and some saw it as adding insult to injury.

So what’s CDOT doing to alleviate those decade-long issues? First, 250 homes were provided with upgrades to help with dust, noise and pollution.  Also per the community’s request – a partial cover park above the tunnel will bridge the two communities back together while providing a community space for recreational actives scattered across four acres of land that extends over I-70 between Columbine and Clayton Streets. 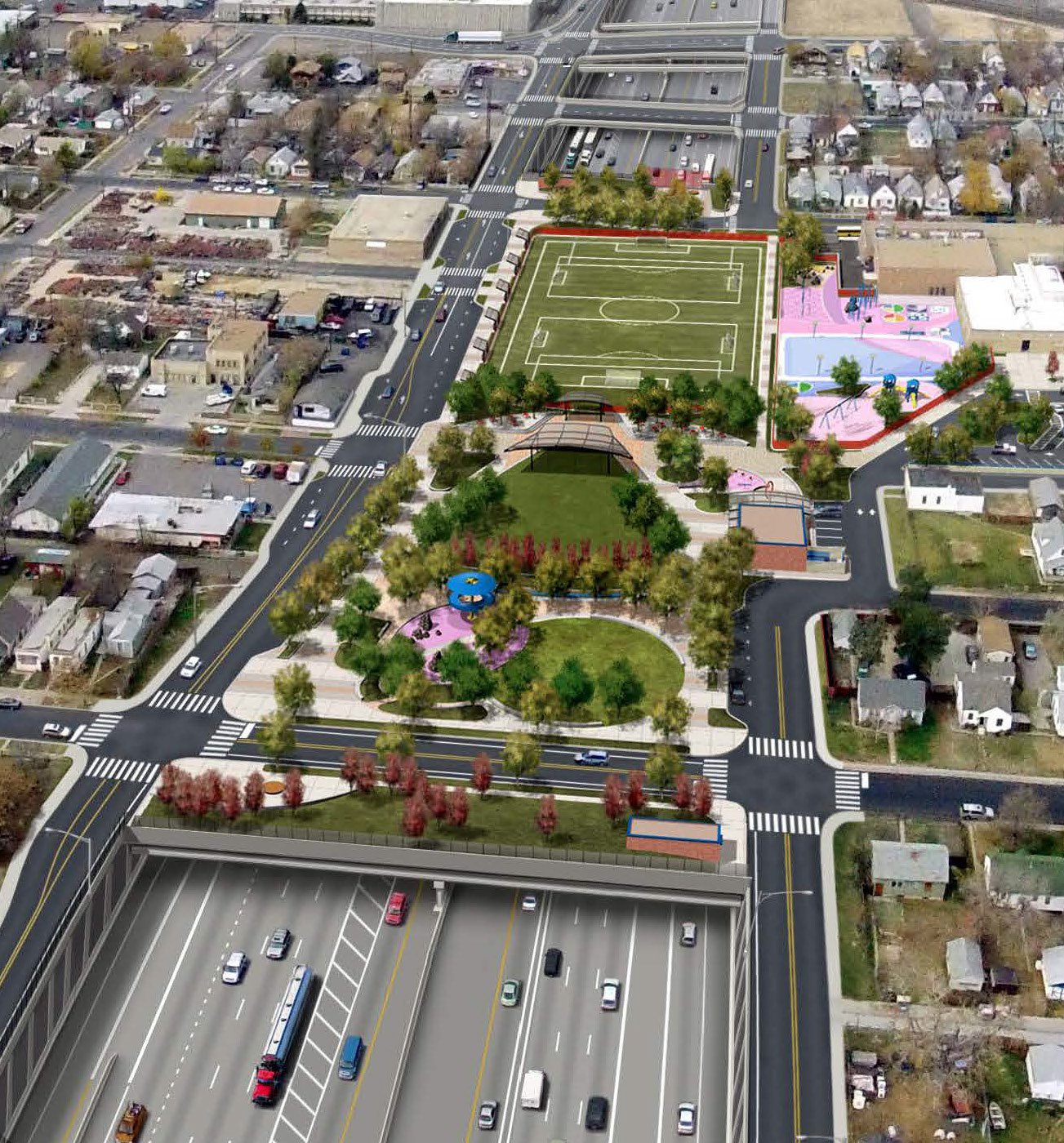 A rendering of the park above the new I-70 underground tunnel/lane. Photo by CDOT.

The park will have a soccer field next to Swansea Elementary, a new playground, a splash pad and an amphitheater with upgraded landscaping and planted trees.

These solutions are touted in theory, but many have criticized the project’s displacement of 56 residential properties and 17 businesses to make room for the new park. CDOT has a reimbursement plan for that, but increasing costs of homes in the area create worry about being pushed out of the city altogether.

To dodge those complaints, CDOT established an environmental protection protocol to monitor air quality, soil and water conditions and noise pollution from construction that may disturb neighbors. Whether or not those efforts will suffice in the long run is up the air, but regardless, the project is pretty much already here.

The park, which will have a name in 2022, is scheduled to complete early 2023, while Central 70’s construction is expected to finish late next year. But this is Colorado, we know construction never finishes.