There is much to be said about the talent that exists in the fashion industry. From designers to models, this talent is often displayed through pure self-expression. What can inspire these individuals to stay creative stems from not only fashion but from sources outside of the industry as well. Local Denver model, Vincent Greathouse attributes his successful modeling career to a special bond in his family as well as embracing his roots. Here at 303 Magazine, we sat down with Greathouse to discuss his career and the complexities that inhabit the inside of the industry. 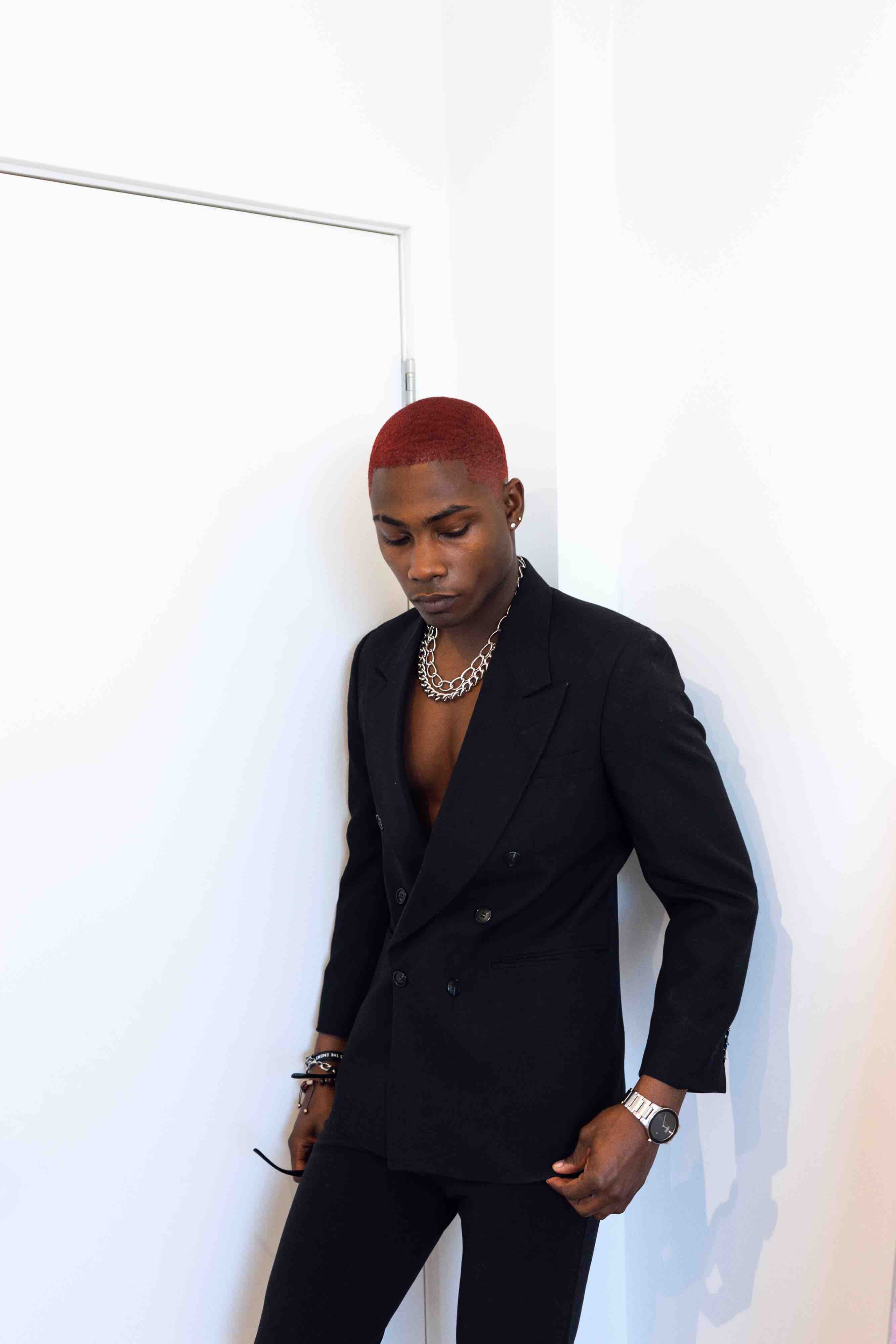 Growing up, Greathouse described himself as introverted yet always involved in the arts. Whether it was sports, playing the saxophone or the piano, Greathouse found inspiration in every avenue he took on. Now, at 20 years old, Greathouse has already racked up an impressive modeling career. Being featured in brands like North Face, Buckle, Pedro & Tailor and more came to life when stopped on the street one day. Having moved from Alabama to Colorado, Greathouse was approached by a representative at Wilhelmina Denver, and with the help of his brother, Justin Great, Greathouse applied to the agency. Today, Greathouse is signed to both Wilhelmina Denver and LOOk Modeling Agency in San Francisco, California.

Working for large modeling agencies has taught Greathouse about the business side of modeling. The industry and brands are known for being straightforward and blunt about the aesthetics and look they want to establish. In a complex setting like this, Greathouse learned how to be flexible, confident and versatile in every situation. However with success also comes tribulations. In many instances, models of color are subject to tokenism in the industry. Greathouse shared that this is also a battle that he has faced and often times found himself wondering if he is the right look. He’s also lived the experience of being on set where no one is prepared to do his makeup. Despite this, he continues to stay motivated and confident about what he brings to the table for any and every job.

As mentioned before, the industry is complex. However, the complexities that exist in Greathouse’s career go beyond his portfolio and resume. For Greathouse, leaving a legacy – especially in today’s world where nearly everyone is striving for more diversity – is more important than ever as a multifaceted Black creative.

“I don’t want to be seen as just another creative, model, rapper or singer. I want my legacy to exceed all of these expectations. I want to be legendary, simple as that! I want to show boys and girls who look like me that you can dream and have multiple passions and talents. The sky is not the limit, keep going until you reach the exosphere. There is no exact blueprint on how to be successful, everyone’s path is different. Don’t ever lose sight of your dreams and ambitions,” Greathouse explained. 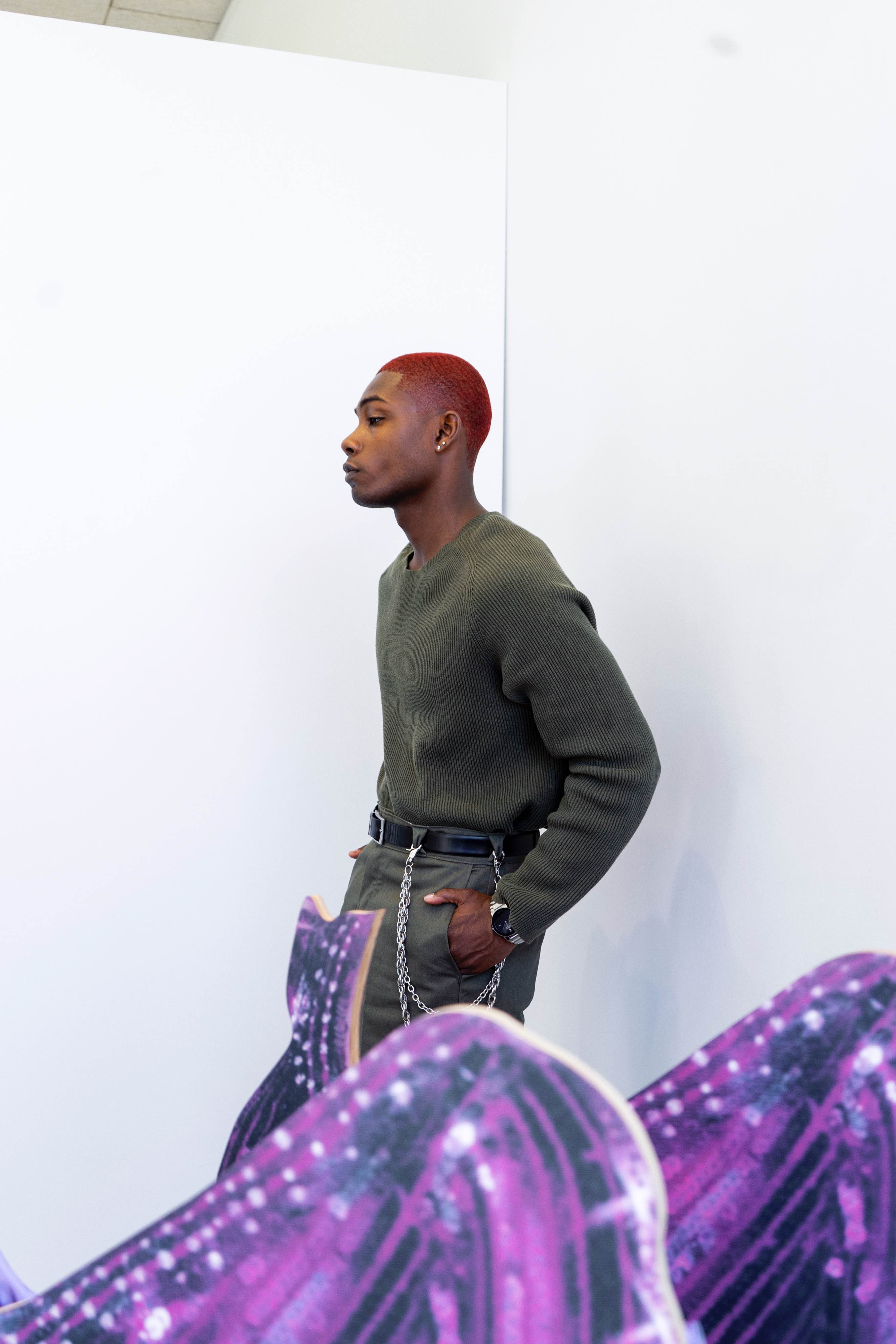 The local creative’s desire to give back and inspire others is largely the result of the closeness he has with his brother, Justin Great. This bond goes beyond blood relation. There is so much love and genuine friendship present that it is unmistakable and hard to miss.

“Justin Great has always been a big inspiration and mentor to me growing up and even now. He is the one who introduced me to fashion and my love for music as well. He showed me how to be a man, and handle my responsibilities as a man. He’s the first person in my family that I feel made it on a large scale. I describe him as a Jack of all trades from being a fellow creative. He is a CEO of multiple companies, producer/music artist, photographer, and marketing executive for Nestle Purina. My brother and family are some of the biggest inspirations in my life.”

Together, the two brothers have combined their talents to produce, record and release Greathouse’s debut EP, Vince’s Modern Life. Having previously put music out,  his brother produced the EP. Greathouse will continue to model as well as pursue his music during this transitional time. The music and fashion industry are no strangers to each other. They coexist and work as comrades because of how influential they are. “People think modeling is easy but it’s much more complex than people think,” said Greathouse. “You have to be able to adapt to the weather, aesthetic, criticism, and use all of your modeling poses, personality and charisma to achieve the standards of the brand or photographer.” 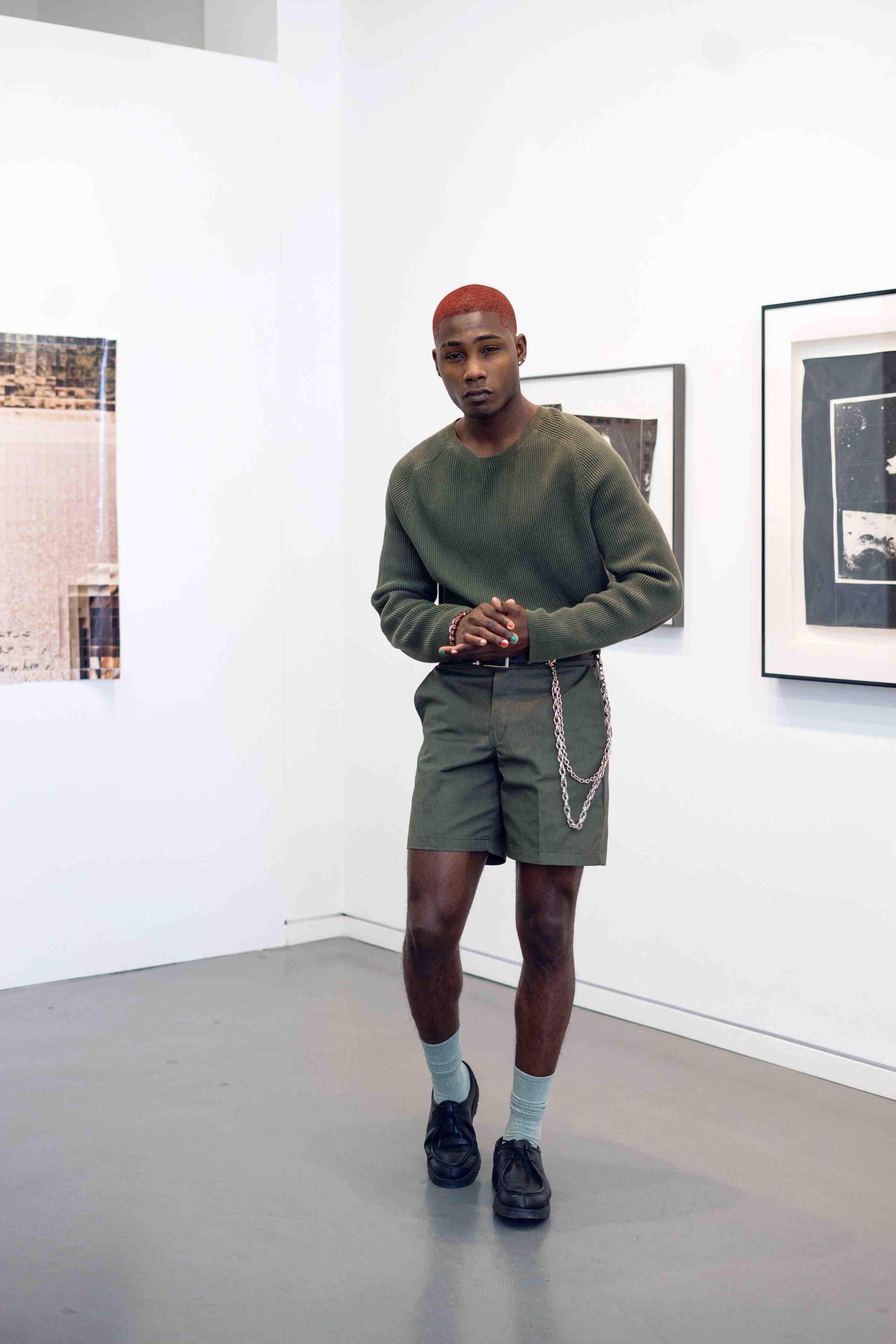 Bringing in the experience and knowledge he has thus far equipped him to embrace the necessity of being humble while navigating his new path into music. In regards to the connection between the fashion and music industries, Greathouse feels that both are excellent outlets for authentic expression. “I think the reason why fashion and music are always intertwined is just that music is all about self, expression and creativity. Which is the same thing for fashion!” he explained. ” I feel like I have to just continue to be me within my music and fashion, expressing myself to the fullest. I honestly feel like I go through phases where I try to capture a certain aesthetic or make a certain statement within my music and fashion.”

Not only does Greathouse get to personally experience the union between both industries being a model and musician, but he has also partnered with Jevon Taylor, founder of False Ego to host a release party at Taylor’s brick-and-mortar shop. The release party will take place this Saturday. Those with invitations can expect to hear Prince Vince’s (Greathouse’s stage name) release of Vince’s Modern Life as well as access to shop False Ego’s apparel. Greathouse confirmed that his music will be “… versatile, vibrant, bold, unique and unapologetic. To be honest, I want my music to show my personality and growth. I feel you can play my music anywhere and catch a vibe. I want to be transparent with my audience and give them the raw emotions, and feelings I may have or might be dealing with!” 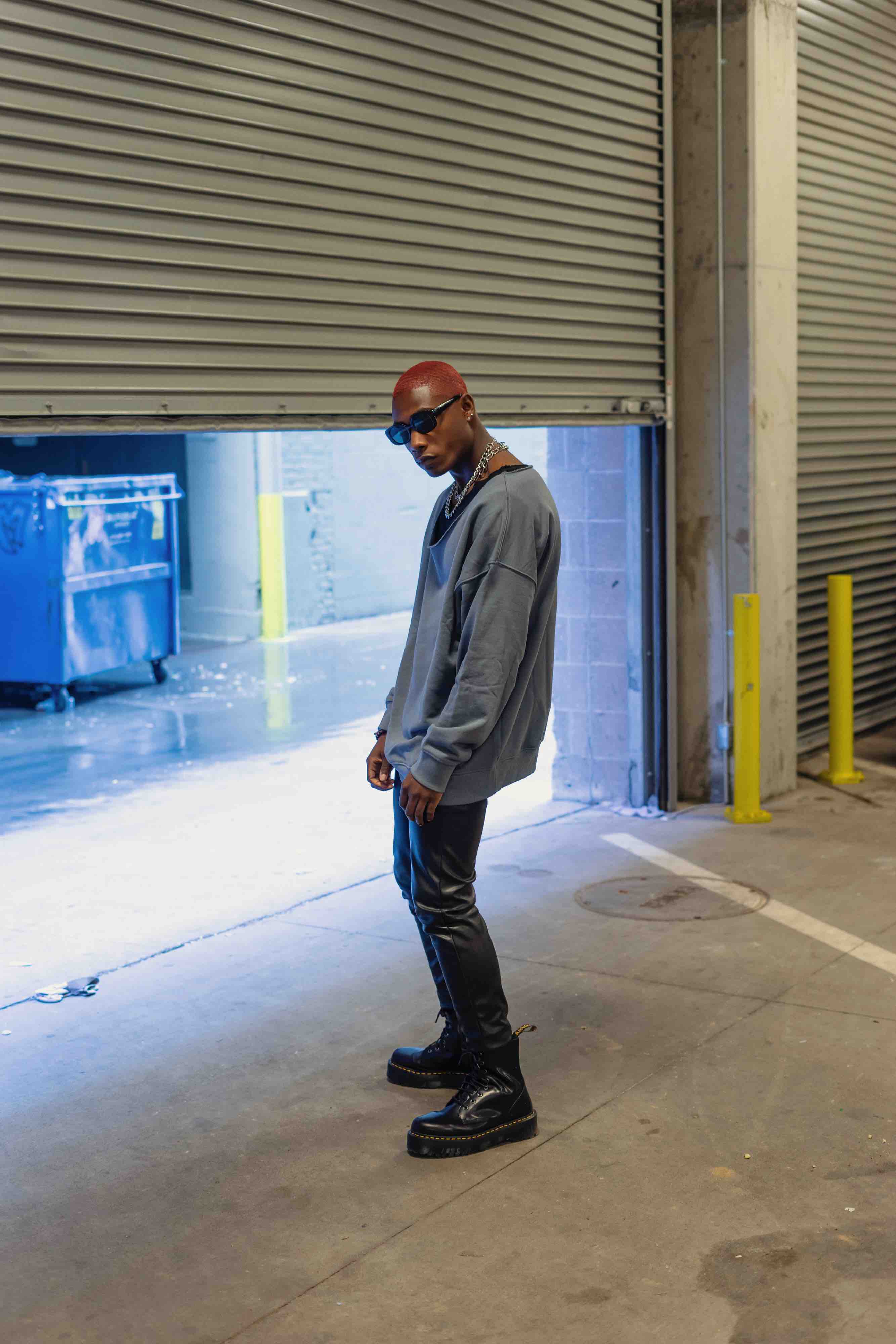 This journey for Greathouse has not only been inspiring but has shown his dedication to community and authenticity. Within the talent that exists in these industries – for models especially.”I feel like modeling can be an outlet for you to tell your story – every model’s path is different,” Greathouse said. “You may have similarities in experiences within the industry. Every model is an individual and has a unique story, unique passions and unique goals that they want to accomplish. We just have to be open to hearing these stories.”

Tap here to hear more about Vincent’s journey where we filmed a recorded version of his interview at the Creative Butter Studio in RiNo.

All photography by Casper Lundemann