Golden is a destination for tourists and locals alike. Residents of Denver, and the surrounding suburbs, flock to the historic city to hike at North Table Mountain, ride at Apex Park and tube down Clear Creek throughout the spring and summer. And there’s one thing most people do after each of these outdoor activities — grab a beer. Now, the Golden Mill food hall is the place to do that. With five food vendors to choose from, two tap walls with over 50 drink options and two outdoor patios it will be Golden’s go-to destination for enjoying a beer outside, eating great food and catching up with friends. 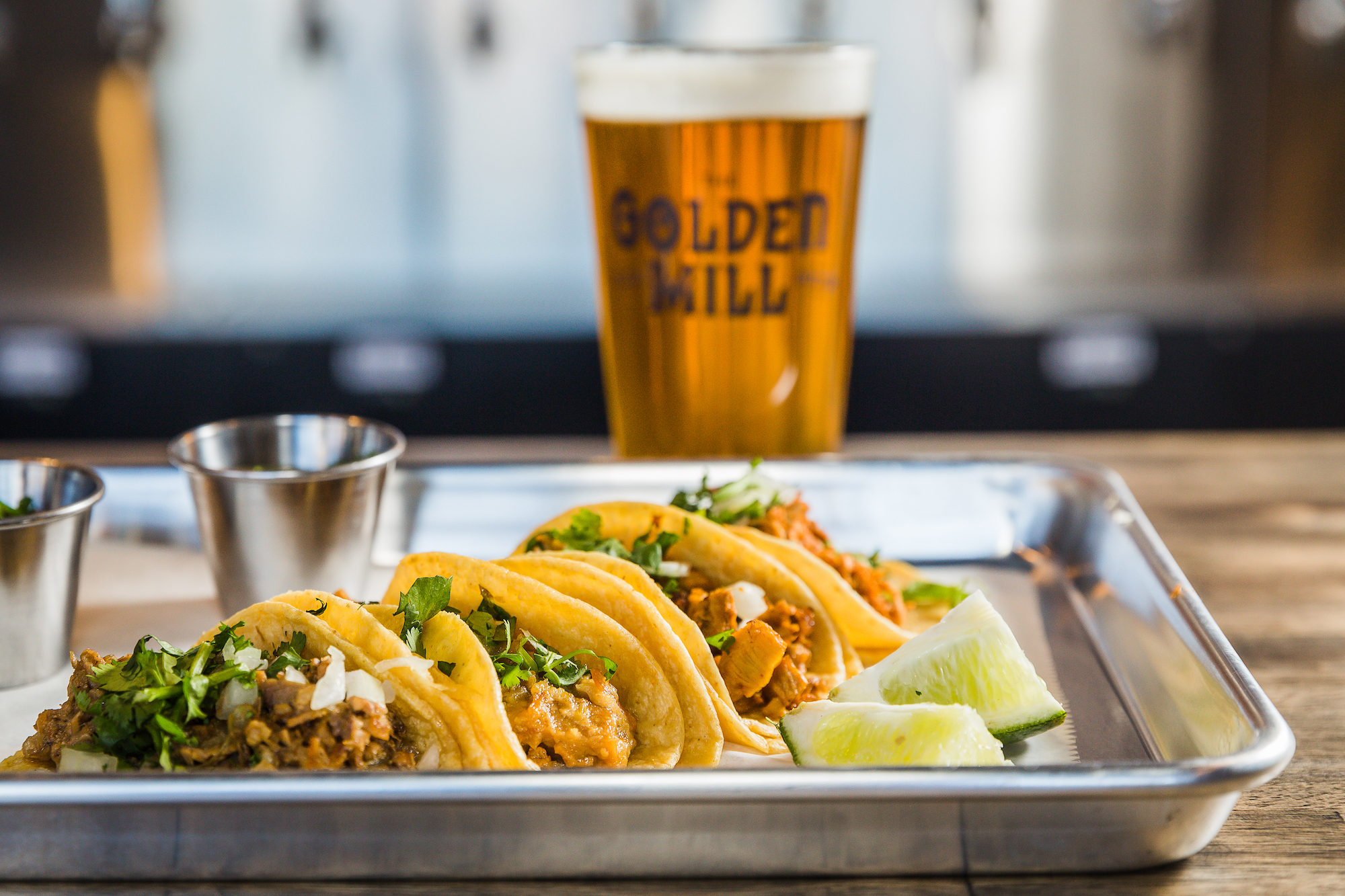 Photo by From the Hip Photo

To Golden natives, the name “Golden Mill” might sound familiar. In the 1860s, the building operated as the city’s renowned flour mill and was one of the first businesses in Golden before it became the Golden Mill Feed Store in the 1950s. Until 2018, it operated as a feed store where locals would buy food and supplies for pets and livestock.

“We’re only the third owners of the building which is pretty crazy for a building this old,” said co-owner Susan Ganter. “People would gather here to chat with neighbors about what was going on around town, it was much more than a feed store.” Ganter — along with her husband and several other Golden locals —wanted the building to continue operating as a gathering place like it had for over 150 years. In order to honor the history of the building, Ganter was able to get the building designated as a historical landmark so the original signage and building exterior could remain. “We kept everything that we could in original condition from the brick walls to the ceilings and floors,” she said.

Ganter used to buy her dog food from the Golden Mill Feed Store and now owns the building along with her husband Wes, Mark Shaker — owner and creator of Stanley Marketplace in Aurora — Corby Felsher and fellow Golden locals Don and Jayme Martin.

“We knew this building meant too much to Golden to get it torn down and with the location right here on the creek, there’s nothing like it,” said Ganter. The group of locals understood they wanted to create a social gathering place but weren’t sure what that would look like. Shaker helped shape their vision into the Golden Mill food hall.

“We started imaging how we could make it into something cool by trying to figure out ways we could leverage the outdoors,” said Shaker. They were able to get approval to add a rooftop deck and converted the parking lot into another outdoor space called “The Yard.” The entire space can seat 575 guests — with 200 of those on the rooftop deck that overlooks Clear Creek and has views of North Table mountain, South Table mountain and Mt. Zion. It’s truly an outstanding location for Golden with so many other landmarks in view. 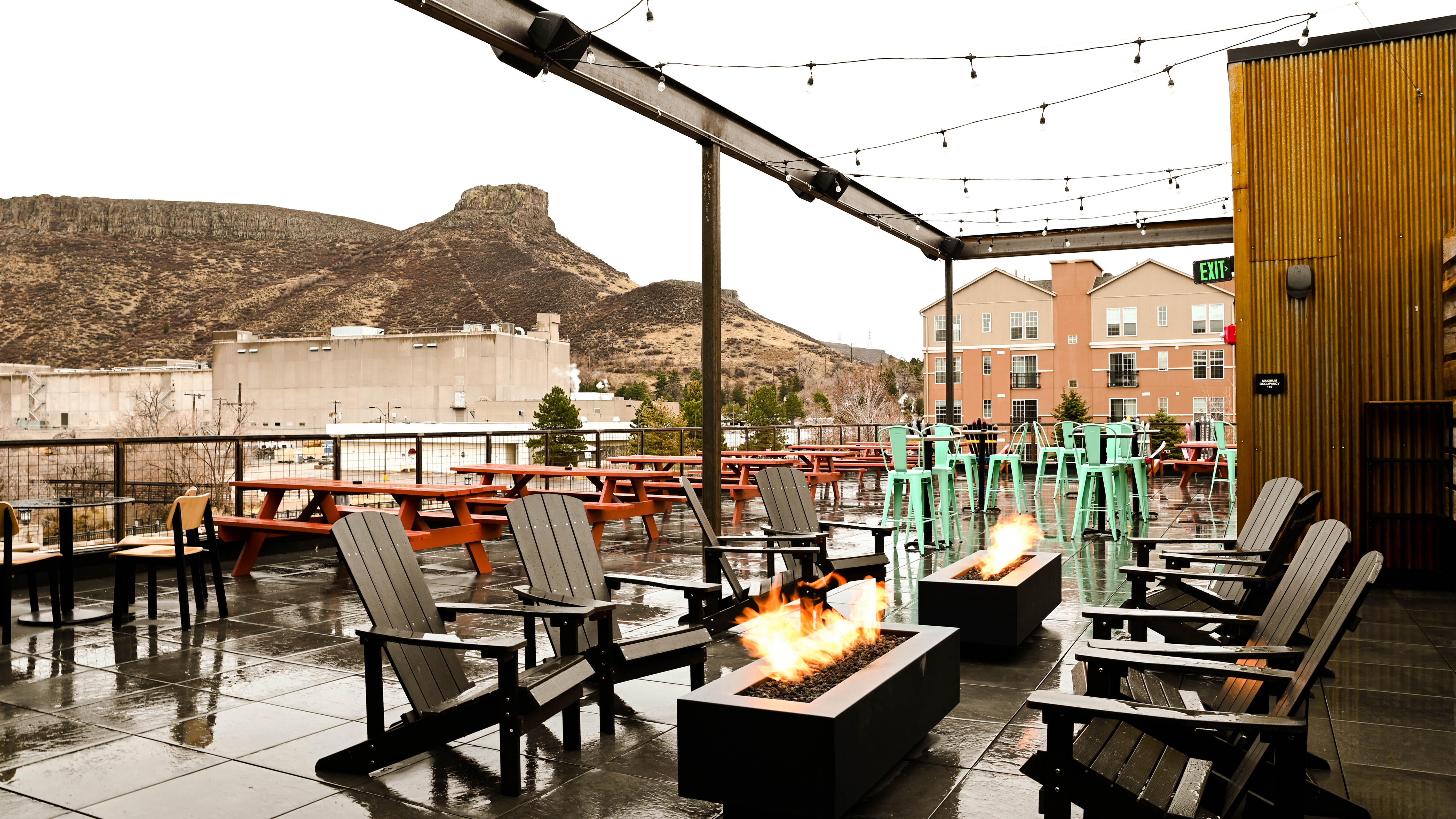 When you walk into the Golden Mill, you’ll head downstairs to the host stand, where you’ll be greeted and asked to provide your ID and credit card. Your credit card will be hooked up to a Golden Mill card that you can tap to pay at any of the vendors. Instead of a bar, you’ll find two separate tap walls where you can pour your own beer, wine, sake and cocktails and are charged by the ounce. The downstairs tap wall is dubbed “Old Reliable” — a nickname that locals used to use when referring to the flour mill. “It’s really efficient and you can try several different things before deciding what you want to sip on,” said Shaker.

In addition to the draft wall, you’ll find four of the food hall’s five vendors downstairs — Tacos al Chile, Republik of Chicken, Rolling Smoke BBQ and Happy Cones Ice Cream. Ganter and crew surveyed locals to hear what the community wanted out of a food hall before deciding on the vendors. Local artists are also showcased throughout the space and all of the artwork and swag is for sale. “We really wanted to do this by the community, for the community,” said Ganter. On your way upstairs you’ll also notice the wall is graced with Golden-based Icelantic skis — a fitting installation that exudes the Colorado theme.

Upstairs, there is the second draft wall along with Sushi Sora and the expansive rooftop. Jesus Silva owns three of the Mill’s concepts — Sushi Sora, Republik of Chicken and Tacos al Chile. Silva is not new to the food hall scene with Misaki Sushi in Stanley Marketplace and Broadway Market, Silva’s Fish Market in The Denver Central Market and Tacos al Chile in Broadway Market. His sushi rivals Denver staples like Sushi Den, his street tacos are made with the delicious, fresh corn tortillas and you can’t go wrong with his saucy — yet crispy — fried chicken sandwiches.

It’s exciting to see the Golden Mill open at a time when more Denverites are moving to the suburbs and seeking an outdoor gathering place. The rooftop alone is worth the visit.