What do barbering and hip-hop have in common? A lot actually. Hip-hop is a numbers game, where syllables and rhythms strategically sound off in well-orchestrated stanzas. Whereas in barbering, the head is a canvas of digits that adds up to aesthetic precision. Outside of the tools of the trades, rap music and barbering share a language, where the sum of intentionality, originality and skill reign supreme. Such is the case for Barbershop Uncut, the creative suite of Onyx Salon & Barbershop in Westminster, a multihyphenated shopfront that doubles as a haven for Denver’s brightest rap hopefuls and upstarts. Altogether a record label, a production hub and still a barbershop at its core — Barbershop Uncut is on a mission to cut through the noise so that Denver’s hip-hop scene can be heard loud and clear. 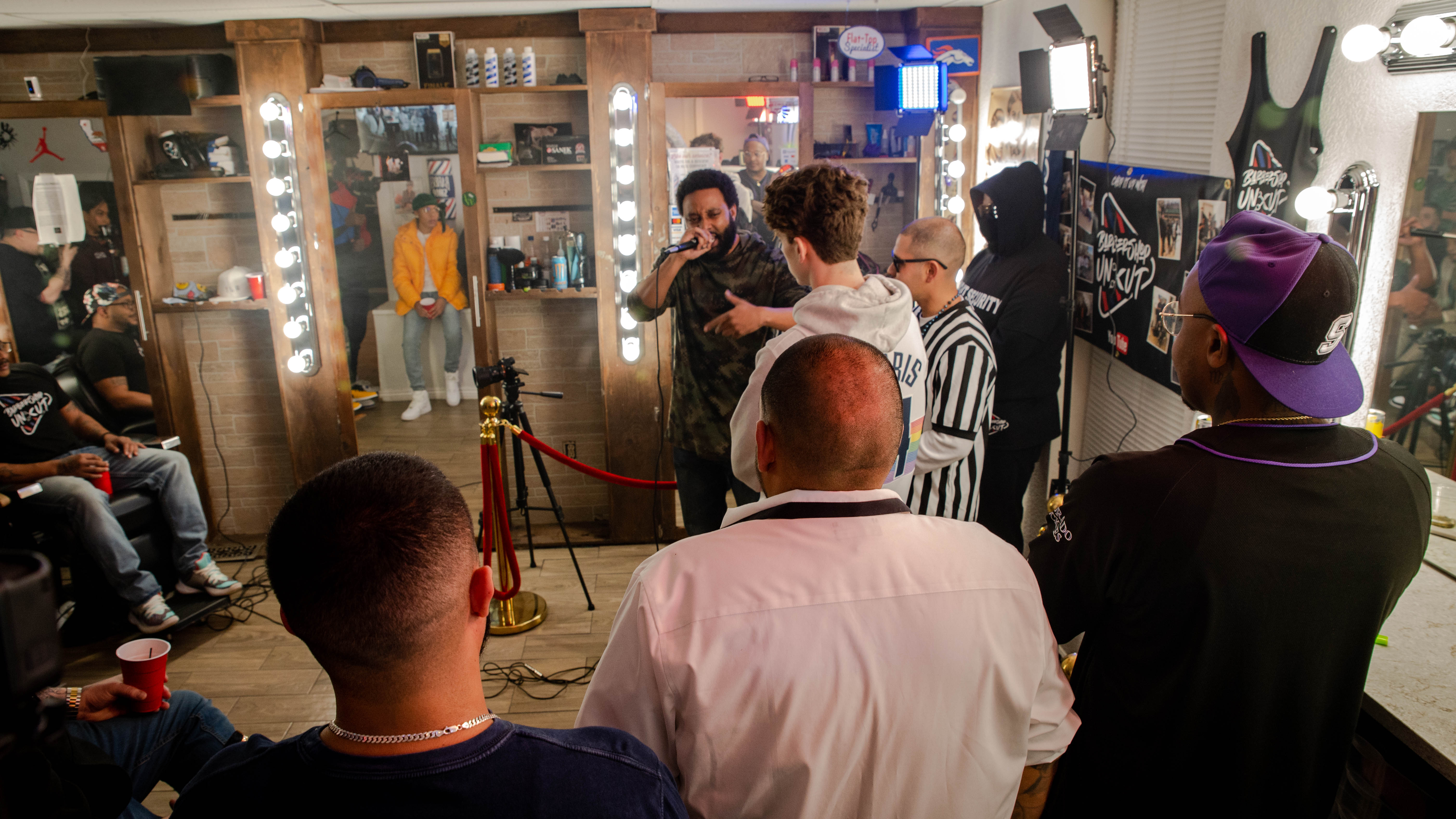 Barbershop Uncut — as their hip-hop spotlighting efforts has been dubbed — is the brainchild of barber Kenneth “Kay Dee” Holmes, videographer John “The Barber” and owner Armando Trevino. Starting the barbershop around five years ago, the group, inspired by the conversations and the happenings inside the shop decided to invest in video and audio equipment and start up a Youtube channel to let people into their world. It wasn’t until Trevino watched the Netflix series, Rhythm & Flow, however, and realizing that Old Man Saxon and Jacob Campbell were from Denver that the gears began turning on how they could shine a similar spotlight closer to home. The resulting channel centers around studio vlogs, music videos and more, but it’s the cyphers and interviews that really puts Denver’s hip-hop scene to the test.

“We were looking for people to network with and kind of cross-promote and I had seen a cypher that they did in Colorado Springs. I tried to reach out to the people who organized that to try to get them to come through for a cypher in our barbershop but I wasn’t getting any answers, so we just started assembling our own,” recalled John.  “The first one that we did was with a lot of the top artists here in Colorado and that kind of caught the attention of a lot of people.”

The people he refers to reads like a who’s who of the local hip-hop scene, from Trev Rich and DNA Picasso to Jay Triiiple and Kayla Rae. In cultivating this channel, in the process, Barbershop Uncut has provided a community and an unfiltered look at the pursuit of stardom within the local hip-hop scene. Established and emerging artists can be seen side by side on the channel’s endeavors, exemplifying a commitment to the cultivation of talent as much as admiration of the artists themselves. Despite the wide array of talents who move through Barbershop Uncut, the group has no illusion of what makes a great hip-hop artist.

“You have to have the talent for it, but you also have to have the work ethic because to be an artist these days, you’ve got to know so much about the business and the industry. You have to have this will to get things done, regardless of whether you have the funds that help or a written path — you’ve just gotta figure it out,” said John.

Within the past year, the Barbershop Uncut team has taken two of the city’s best emcees under their wing in a representative capacity, Jay Triiiple and A Meazy for Uncut Entertainment, and their once only local-centric rap battles have taken to the road. Pitting opposing rappers head-to-head in a bracket-style challenge, the rap battles are a cutthroat callback to the golden age of rap where lyrical skills and wit were feverishly finessed on the fly and competition with treated with a do or die mentality. Reputations are on the line, and their credibility as hip-hop artists as well, and some of the city’s best like Old Man Saxon, A Meazy and in-house producer Mic Coats among others stand as the judge, jury and the executioner. The winner of these rap battles gets to travel alongside Jay Triiiple and A Meazy to a predetermined city with the Barbershop Uncut team, where they will face off against that city’s respective champ — also chosen via bracket showdown. This year, the team has its sights set on Atlanta.

“We take three Denver artists to a different city to perform with three artists of that city and hopefully grow their fan base, our fan base, and get out of the city so that people see other markets, to grow a fan base and network with other artists and such,” said Trevino. 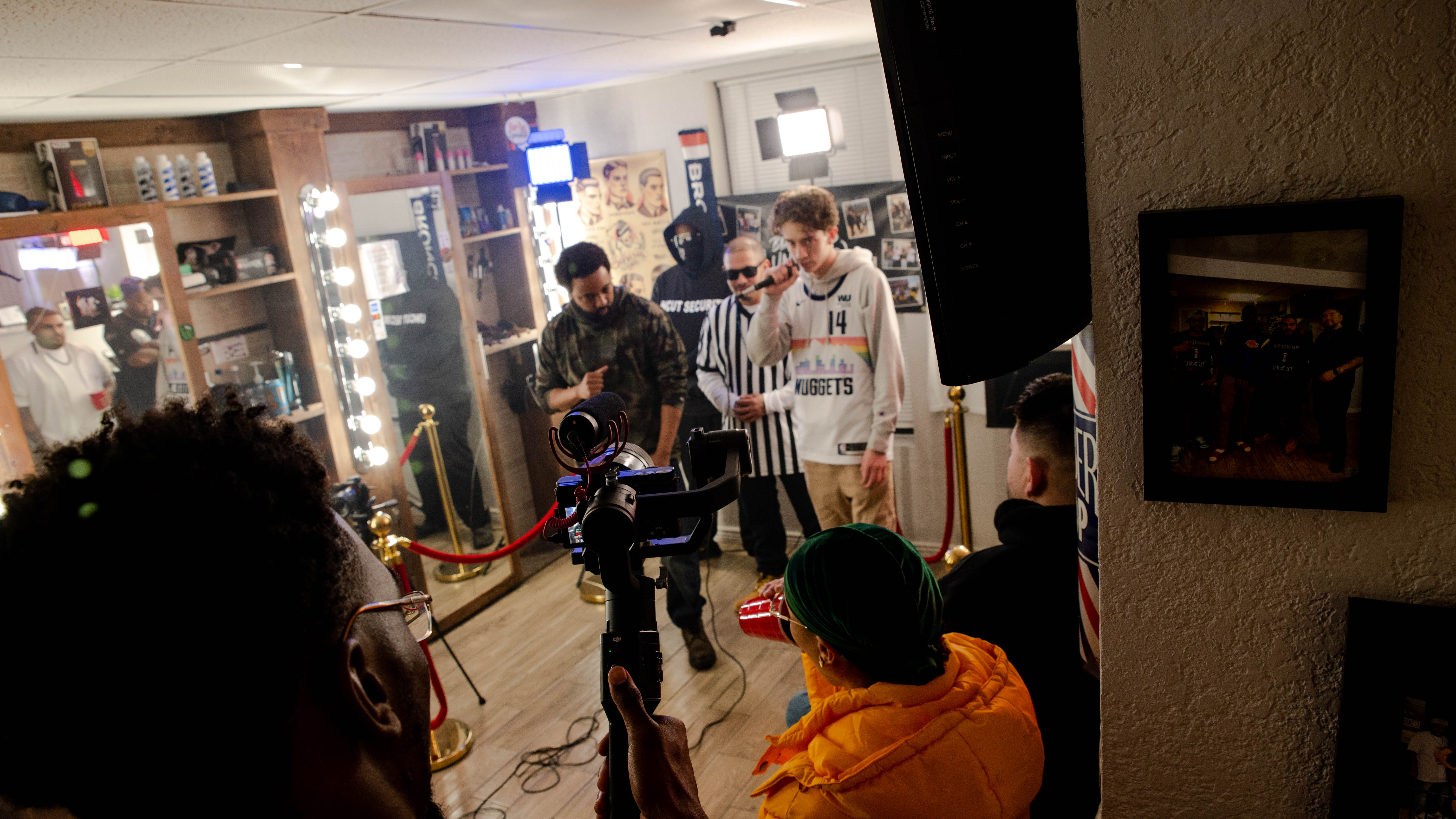 The not-so-odd coupling of hip-hop and barbering still has some kinks to work out on a logistical end as both ventures grow, but for the Babreshop Uncut team, they are figuring it out as they go like they’ve always done. None of them could have predicted five years ago that they’d become a beacon for the city’s hip-hop community, but they embrace it — constantly seeking a brighter spotlight to shine on the city. It’s not your average barbershop — they’re cut from a different cloth.