All photography by Anna Sutterer

Denver Skates Is Teaching More Than 100 Skaters and Counting

Afton Hill and Rachel Martin each began their quad skating journeys in Denver; Martin whipping around derby tracks and Hill rolling with old-timers at the rinks. During a chance meeting at a derby event, their first-ever conversation, right there in the bleachers, they developed plans for skate events and a formal organization: Denver Skates.

Over the past two years, the pair has added three more instructors, offered four types of skating classes, and taught 150 people ages three to 73.

“It’s great for your brain,” said Hill. “And building a booty,” added Martin. Plus, it’s easy on the joints, you can do it year-round inside roller rinks or out at park meet-ups, and it jives with Denver’s health culture. These elements paved the way for a rise in quad skating interest here, mirroring a widespread boom last year. 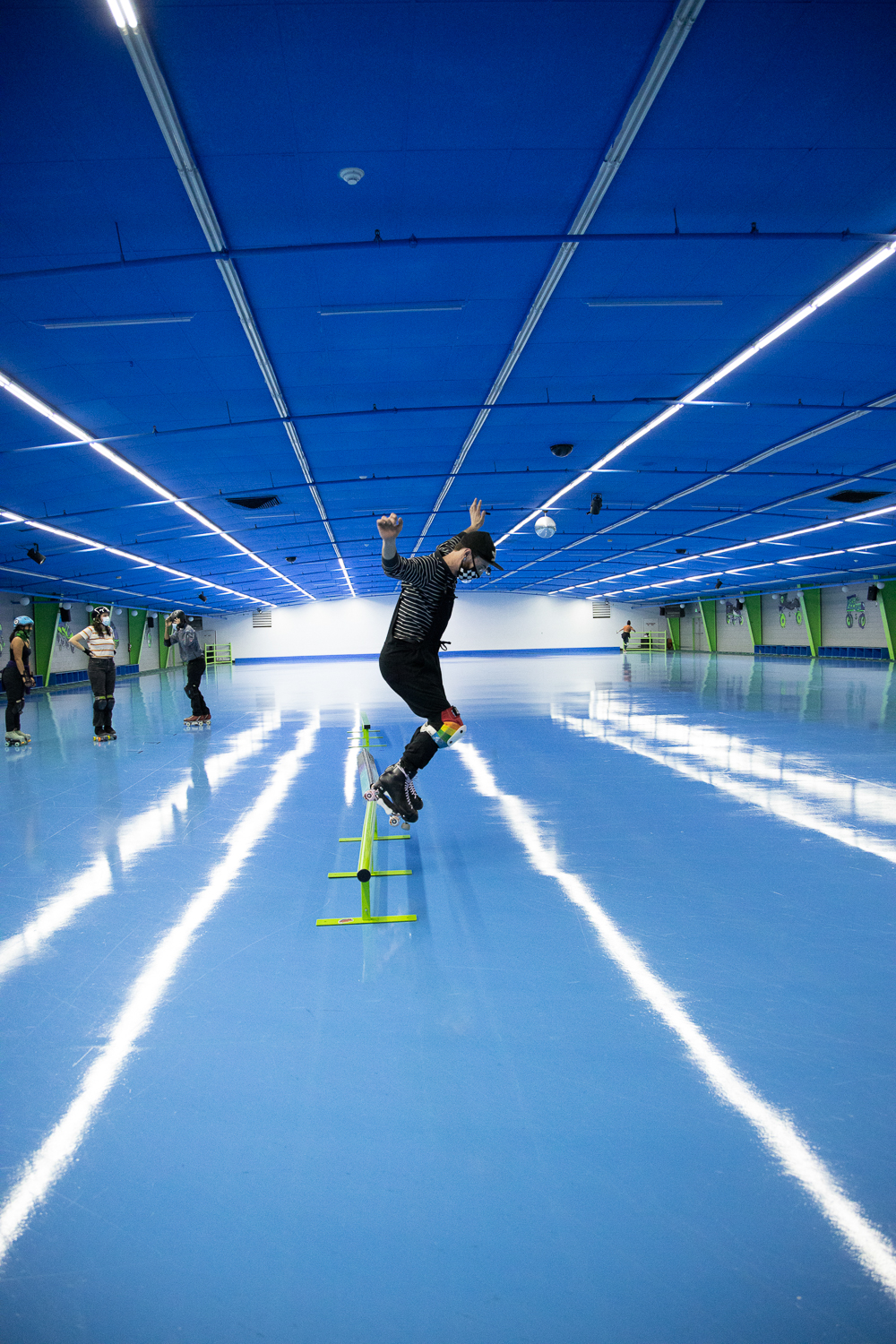 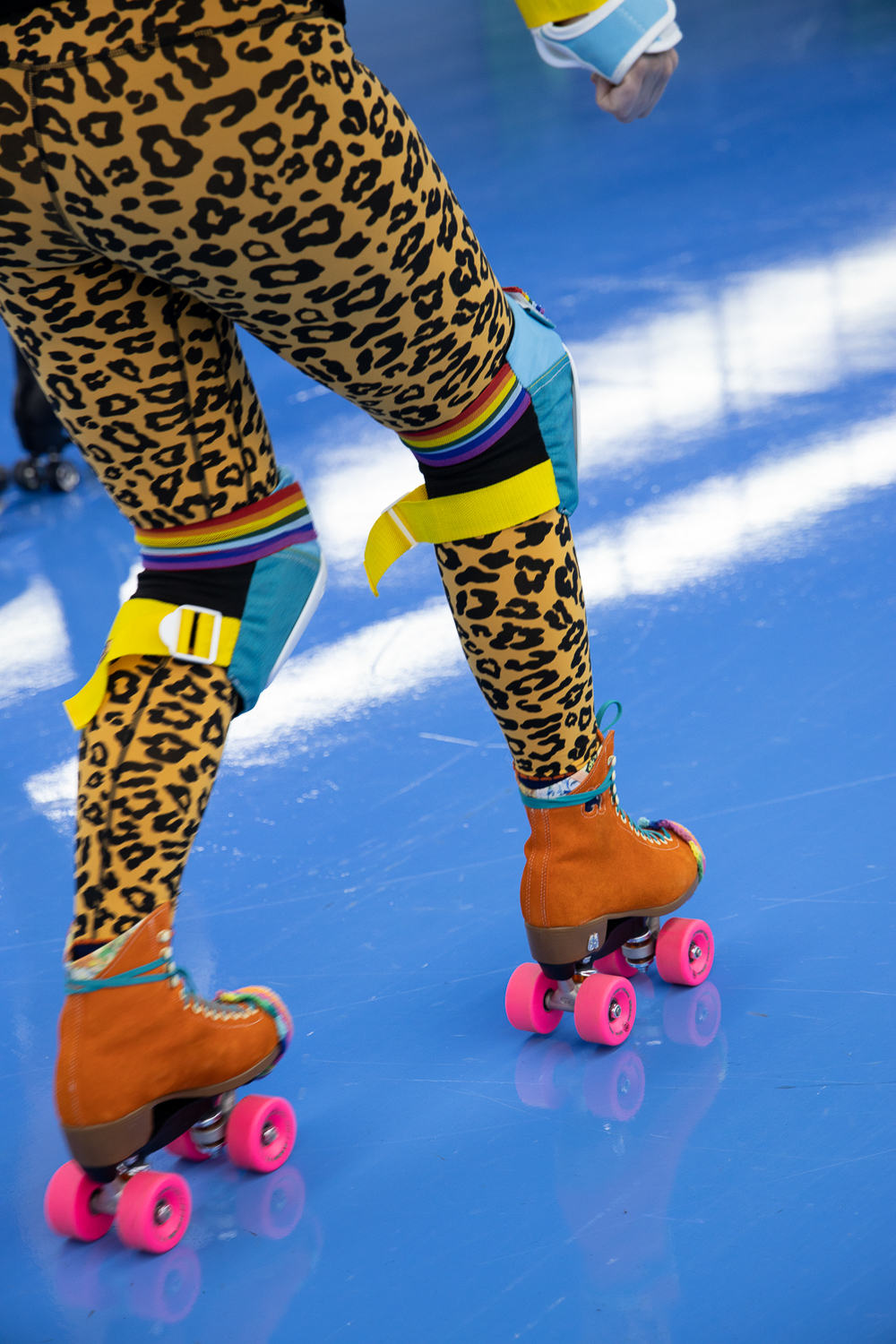 Many things about the pandemic were bad for small business and socializing. Except, perhaps, for the prospects of small skate businesses and the communities they outfit.

Denver’s Death & Glory Skate Shop, for example, reported a 389 percent increase in skate and blade sales during the summer of 2020 compared to the previous year. News of broad skate shortages hit headlines and Reddit r/Rollerskating threads, with the blame, or credit, largely given to TikTok videos and the pandemic pushing people to regain old or take up new hobbies.

Denver Skates instructor Angel Lopez got hooked almost three years ago watching skaters dip and synchronize their moves on Twitter and Instagram. Roller Travis Reynolds was, and is, a favorite — Lopez wanted to be fly like that guy. So he started going to the rinks at home in San Antonio. It wasn’t until he moved to Denver and connected with the local Chicks In Bowls chapter that he really started exploring skatepark, or aggressive, quad skating. I want to skate like these girls are skating, he thought. Now, Lopez instructs rails and skatepark classes alongside the backflipping gymnast-on-wheels Brina Wyss.

“Our name is promoting and getting a central hub for roller skaters, aggressive and artistic,” he said.

Hill is also careful to point out that while the pandemic and viral videos have helped put the sport back on many folks’ radars and grow Denver Skates, “rink skating and that culture has very much been alive and maintained by the Black community.” The connection was particularly strong during the height of the civil rights movement and the birth of hip-hop, according to the United Skates documentary. Roller rinks, despite issues of segregation and discrimination, were places for Black joy, connection and expression.

”It’s always been my number one goal in life to own a rink,” said Duncan. “Never in my wildest dreams did I think I would get to own this particular one.” The Lakewood rink, which opened in 1958, was where Duncan spent most weekends age eight to 16. It closed and became a thrift store in 1996. Once the building finished its retail stint and Duncan had concluded a career in the corporate world, the two reunited to bring roller recreation back to the community. Opening day in 2017, the line wrapped around the building and 1,500 people skated a massive re-vamped surface.

Though COVID-19 forced a temporary shut-down, Roller City West is now open with limited capacity and a collection of health and safety protocols. Duncan is optimistic about his business’s growth and pleased to see an “older” demographic (25-55) keeping up the sport. Denver Skates brings a level of instruction that creates accessibility, plus they’ve created a good amount of regulars at his rink.

“It’s definitely a symbiotic relationship there,” he said.

Get a skater talking about their gear, and it’s clear there’s more to the footwear than just eight wheels — it’s an attraction.

Lopez’s aggressive style skates are built with a red suede Bont ParkStars boot and park flow wheels plus Chicks In Bowls sliders (pieces that aid rail grinds and ramp stalls). When the lights go down and adult skate begins at Roller City West, he unveils his artistic skates, a pair of Jordan sneakers fitted with plates, trucks, and wheels. (See CIB’s guide to building your own skates here).

The physical beauty of skates partly sparked Kati Long’s obsession. For a while, she scrolled through Instagram watching roller talents, but ultimately got pulled in by the Moxi brand’s Long Beach/SoCal retro aesthetic. Her starter pair were Impalas, but then on a trip to Death & Glory she leveled up to sky blue Moxi Lollys with twinkly toe guards.

Long moved to Denver in August, after her job went remote and her choices for residence opened up. The Death & Glory shop owners and folks at CIB-Denver meet-ups pointed her toward Denver Skates and started fundamentals classes in October.

“2020 happened and like many others, I thought it would be great to start that outdoor activity I’ve been thinking about for 10 years,” she said.

Denver Skates instructors have been incredible motivators and an amazing part of her journey, explained  Long. Especially Andrea, or “Drea,” who’s held her hand through moves and acts as “a fairy godmother” of her skating life.

Goofy, funky, versatile and positive are qualities Martin says her team shares, and what they look for in new recruits. There’s a definite good-times vibe among the group, though their teaching styles and artistry varies.

Take a listen to their personal skate playlists to find some variation: dance instructor Hill prefers R&B and hip hop, slower james that allow her to focus on smaller finesse movements like dips. Martin, who has a background as a fitness instructor, bumps EDM or something upbeat. Lopez turns to tracks that “make you feel like you’re the main character.” He’ll turn on “Funny Thing” by Thundercat or “Lost Cause” by KennyHoopla.

Songs that people enjoy so they can feel good while they’re getting back up is key to keeping people in the game, according to Martin. That, and a round of applause when they fall down.

“Since we’ve implemented that [policy], I’ve noticed less upset-ness,” she said. There’ve been fewer skaters in tears, too. Embarrassment and tumbles are inevitable if you keep putting on skates; Martin ensures participants never forget their wrist guards and protective gear, and that they learn how to fall onto pads or soft parts of the body.

There’s a moment, or many moments, in a skater’s life where they have to take stock of their bruises and injuries and ask: “Wait, am I really serious about this? ‘Cuz that hurt.” Long says her first couple of months was like that.

“Roller skating has been a new journey in my adulthood of learning how to accept pain and injury. There’s very little in life that motivates me to put myself up to that sort of thing.”

Yet even after tailbone bumps and a recently hurt back, Long found herself looking up more skates. She’s trying skatepark style and learning to pump up and down ramps, while also building up muscle to minimize future risks.

“You’re flying. You feel free. It builds confidence,” Martin said about the particular embodied experience of skating. “You’re making yourself a stronger person. People find individual awareness. It sounds deep, and it is.” 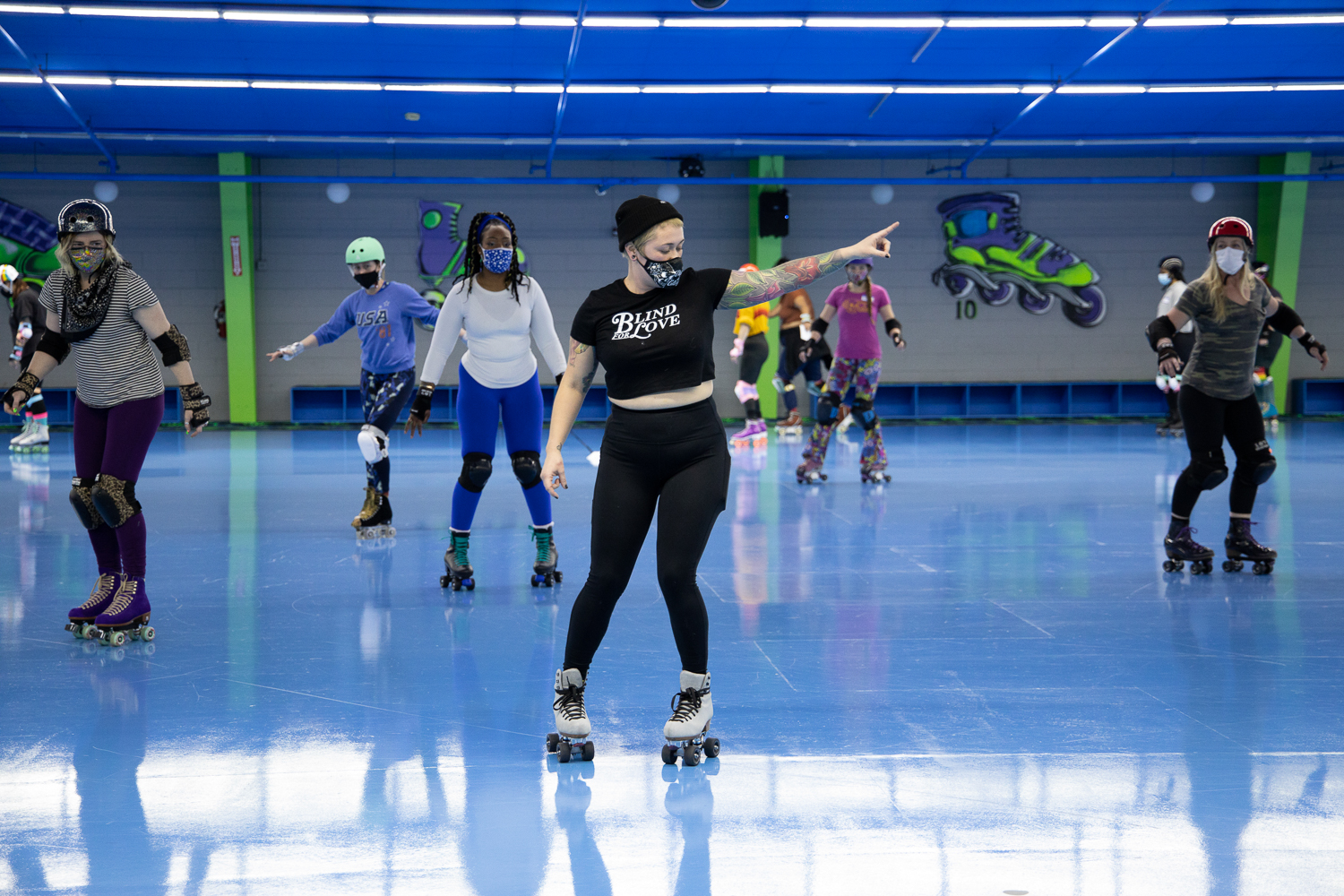 This is not just a fad or a phase, stresses Lopez. “It’s at the high point right now. It’s definitely time to make it go off and make Denver another skating capitol like L.A. or Chicago. Denver has a lot of good skaters and skate parks here.”

While Denver Skates is grateful for Roller City West’s support, they’re looking to grow into a full-time location to meet the demand they know is here. It might look like a warehouse complete with foam pits like the ones Lopez has seen in Portland, Oregon. The group is seeking out community investment partners to make that happen.

For Lopez, the meaning of rinks and skate parks is reflecting in his personal transformation: Lopez used to go skate when he felt defeated and needed to release negative energy from life. Now, rather than being an escape, it’s a destination.

“Support your local roller rinks, they’ve been around for a really long time and it would be a shame if something that has been through so much in its history to go out of style or be shut down,” he said. “Oh, and wear your helmet.”

All photography by Anna Sutterer