Photo Courtesy of the For The Love of Locals Facebook page

The global pandemic has clearly caused major disruptions to the live music industry, and its effects were at their worst in the spring of 2020. Artists and venues alike were stuck in the early days of lockdown trying to figure out how to keep delivering concerts to their audiences. From this time of uncertainty emerged a front-runner format that could give fans a live entertainment experience and do it in a safe way. This technology was live streaming, and it had all the promise to keep a sinking industry afloat. Now after a year of seeing it in action, did it live up to all the hype?

For live stream producers like Kenny Vasko, Co-Owner of Dog House Music Studios, he learned that virtual shows could be effective but it required a lot of work. Early in 2020, Vasko had to scramble to get a live stream set-up operational for artists. After eight weeks of production, he was still asking the question of if this was a viable way to deliver shows. Then, he recalls the moment he got his answer.

“The first one we did was when Dirt Monkey came to us and said, ‘Hey, all my gigs are canceled. I just got a Twitch account, and I want to see what this is all about. Can you help me out?’ And then we spent the next week running HDMI cables through walls, setting up monitors and a whole separate production room. Then, after we did all that work, the show popped off. We were like holy shit there are 1000 people watching us right now. We thought, yeah, there’s a market for this.”

After seeing the success that live streaming could bring, Vasko and his team set out to create a model that paid artists for their performances and gave fans access to those shows for free. This is paid for by sponsorships from businesses wanting to support their music community, as well as reach new audiences. Vasko realized that the live music game had changed, and the industry needed to change with it.

“The best thing that we can do for musicians right now is to help them build content,” declares Vasko. “So through live streaming, video production, and recording services we are helping artists bolster their press kits,  build content, and we’re helping them build more of an audience where they might not have had one before. The way that you do that now is different. There’s no street team right now, there are no posters, heck, people aren’t even watching network TV as much as they used to.” 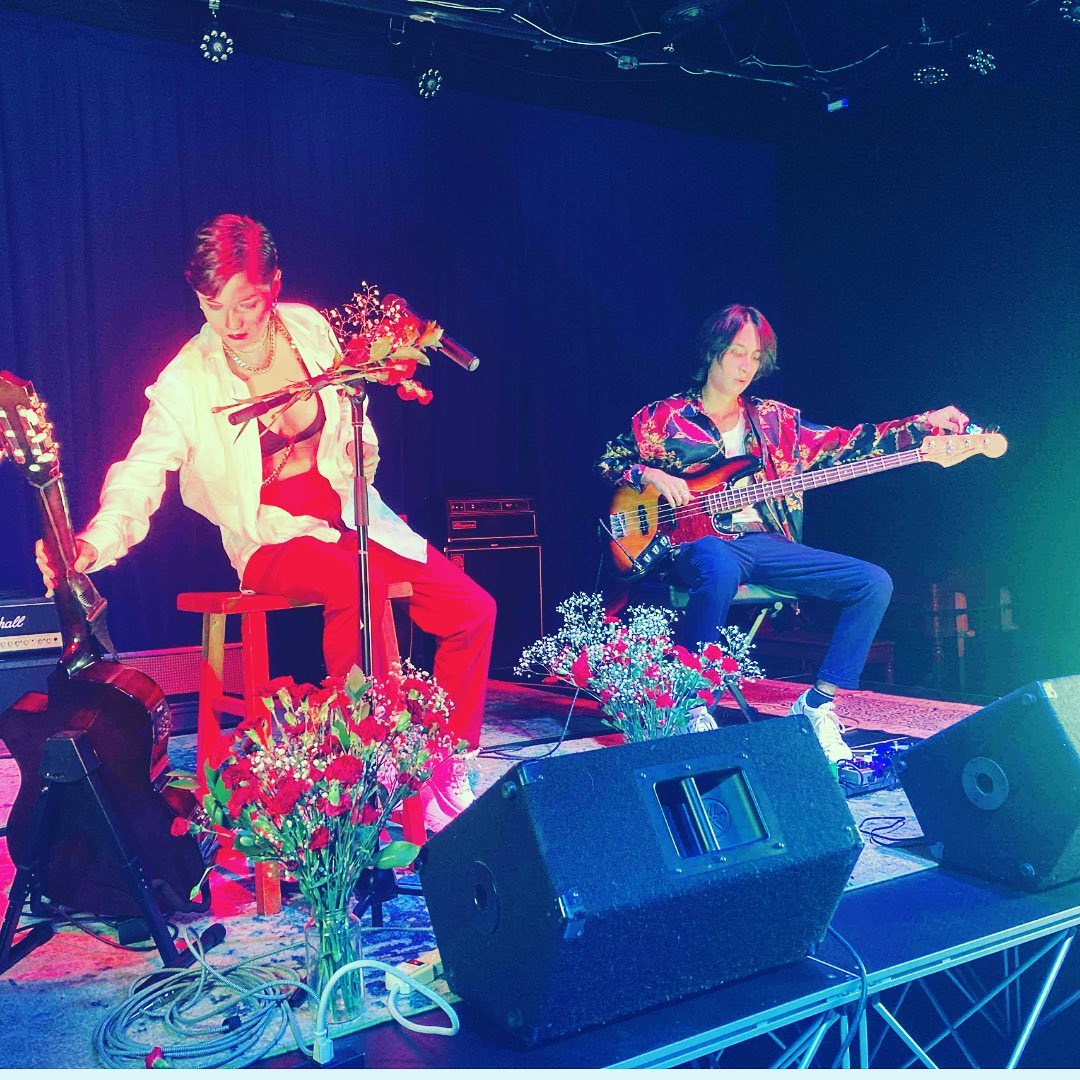 Vasko’s goal of supporting artists continues to be, a boon to local musicians that were trying to stay relevant and monetarily sound during the early days of the pandemic. His goal is also an ambitious one, which is exploring a business model that strays away from the normal “pay-per-entry” concert model. However, he was not the only one who got ambitious with live streaming in 2020.

“We made the pivot pretty quickly,” recalled Lhevine. “My desire that I had told to our concert team wasn’t to just tread lightly. I said I want to do a live stream show every single night, seven nights a week. And they said oh my god you’re crazy.”

Lhevine had the vision of people tuning in every night at six o’clock to Facebook Live to see a new artist perform. This vision became a reality where artists performed and split profits with Swallow Hill. Due to Swallow Hill Music’s nightly efforts, they learned very quickly how to produce a consistent and engaging live stream. The undertaking was immense, and after 200 shows, the production team had learned more lessons than they could have ever asked for. One of the most important lessons they learned was that live streams allowed for intimate content from artists that no other method could offer.

“Online content is king, and we see it time and time again. You can put on a kind of a swanky show and people will tune in and want to take part in it.” said Lhevine.” You have amazing musicians in unique settings. It’s been really cool over the last year to see amazing musicians in their living rooms, in their attics, in their kitchens, right in their homes performing in this intimate way that captures your imagination and that really humanizes who they are as artists. I think that’s where some of the magic happens.” 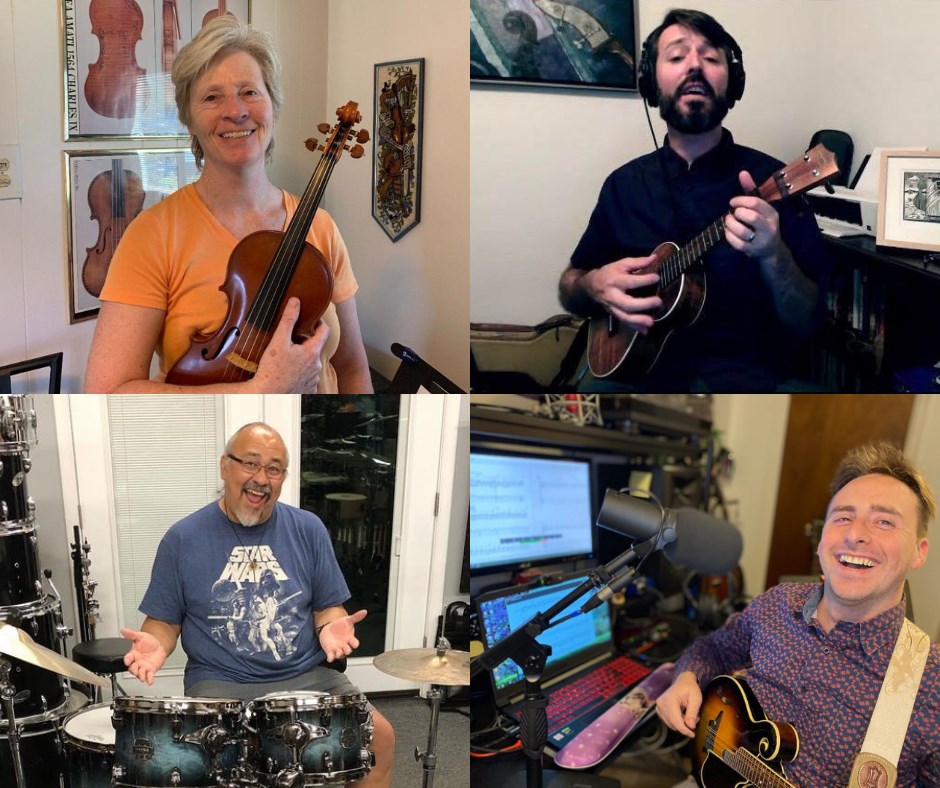 After producing so many live streams and seeing hundreds of artists perform, Lhevine and his team realized something important. They saw that streaming can heavily supplement live music, but it does not have the same level of impact and engagement that could outright replace a live show. Due to this, Lhevine envisions an integrated live stream experience when concert venues open back up for shows. He can see clearly how venues can include a live stream ticket option for those who do not want to risk infection by coming out to the show. Having a more accessible concert may be the future of live music.

Sarah Shuel, Co-Founder of Rocky Mountain Virtual presented by ARISE Music Festival, could not agree more with a vision of a more accessible future.

“Everyone should have access to live music, and shouldn’t feel like they’re missing out because they are choosing to remain at home during this time,” said Shuel. “Music helps us cope with the world at large, and at an especially tumultuous time, we want to make music more accessible than ever.”

Following, Alyssa Montaño, the other Co-Founder of Rocky Mountain Virtual, sees even more potential for the live streams.

“I think this is the beginning of streaming as we know it. In 2020, it was a replacement for in-person events. In the future, I think it will continue to exist as a substitute but also as a supplement. I think live events will partner with streaming partners to increase audience reach. I also think it opens up possibilities for VR and video chat experiences. I am excited to see where 2021 takes us.”

When talking specifically about the effect live streaming has on up and comings artists, Shuel expands,

“I think that streaming opens many doors for the live music industry. For one, it levels the playing field a little bit and gives smaller artists a chance to create an established following if they are too small to get into Colorado’s venues. Streaming allows artists to reach a much larger audience, geographically and based on interest, than they would be playing a live show in any city. I think we can all agree that streaming isn’t the same and will never have that energy and magic that live shows have, but streaming is a tool that can only expand our industry and the opportunities within it.”

The music industry is just beginning to understand the potential that live-streaming has, and it would not have been possible without all the trial and error that local and independent music-focused organizations worked through. Specifically, within the Colorado music community, talented folks that worked in every aspect of live entertainment came together to make live streaming work. As Shuel puts it, “When life gave us rotten lemons — musicians, bands, and music industry workers of all kinds came together to create limoncello.” 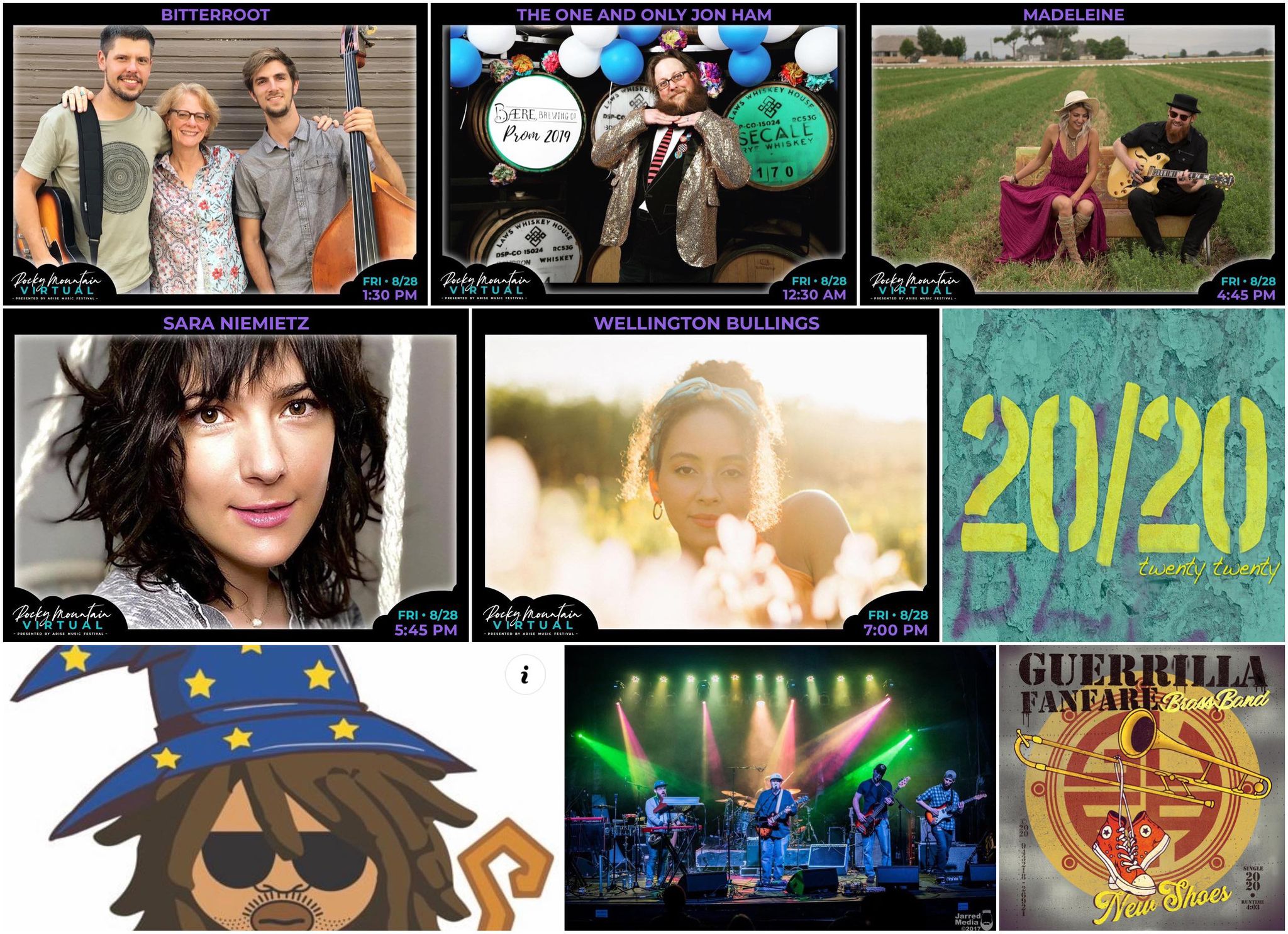 Before the pandemic and before live streaming became a necessity for artists, organizations like For The Love of Locals were already exploring the potential of virtual concerts. They worked with local artists to help build their image in an online space and continued their production throughout 2020. With all of their efforts before the pandemic, even they came to the same realization as their contemporaries.

“Honestly, I don’t think live streaming will ever replace the demand for live, in-person music,” admits Jack Roberts, curator, and booker at For The Love Of Locals. “It could be a great tool and additional revenue stream going forward. Live streaming allows an artist to connect with an audience worldwide, more intimately and immediately, but getting significant funding for the stream is challenging. There are a few local companies that are becoming aware of the benefits of working with local musicians, tapping into their collective reach and loyal supporters, and fortifying their local music community in the process. If it caught on, then artists could potentially look for brand-backing as a future revenue stream. At the very least, it will pour into other revenue streams like streaming income, merchandise, and concert sales, once they come back.” 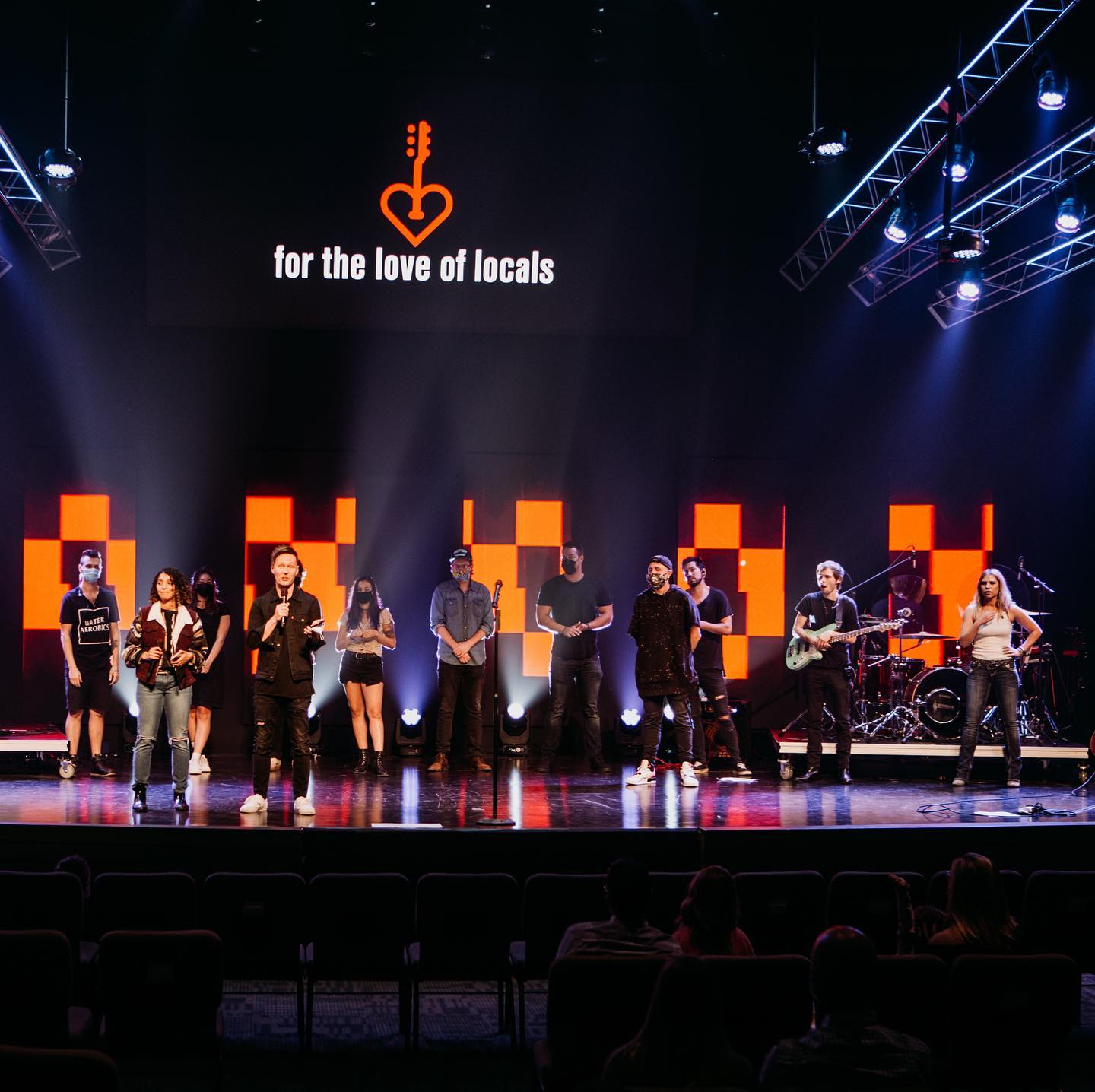 Photo courtesy of the For The Love of Locals Facebook Page

Whether it works in tandem with an in-person concert or is in place of one, live streaming will continue to be explored as a means of delivering live music to fans across the globe. More and more artists are using streaming platforms like Twitch.tv to bring their music directly into viewer’s homes. Locally, live-streamed concerts are set to continue being produced into 2021. Dog House Music Studio, Swallow Hill Music, Rocky Mountain Virtual, and For The Love Of Locals have all set their sites on continuing their virtual shows well into this new year. They join the ranks of countless other local, national, and global organizations that are looking to do the same.

Live streaming may not save the music industry, but it has proved to be an effective method for delivering live music to our homes in a safe way. Looking past the pandemic, industry experts are predicting that it will be a larger part of live performances as companies maximize ticket sales and concert accessibility. Until then, there are plenty of virtual performances to enjoy, with more to come from the ever-adapting Colorado music community.