The Beauty and Resilience of Music Therapy Amid COVID-19

Music Therapist, Kristin Jordheim, of Advantage Music Therapy, and her colleague introduced themselves before returning to their patients via a Zoom meeting. Each patient carried and fiddled with their own instruments in the comfort of their own homes, waiting for the group session to begin. It was a bit hectic at first, as Jordheim attempted to get the individuals settled down, but then the music eventually began as did their therapy session.

Music goes as far back as perceived noise in itself, but who played the first beat or hummed the first hymn and realized the euphoric sensation? It’s hard to say, but music — in its never-ending evolution continues to provide a level of emotional satisfaction, but what we’re now realizing is its medical benefits. Music can be what we need it to be — our morning meditation, our supportive shoulder, and today, music is a legitimate source of therapy for countless individuals.

Music as a means of emotional relief was practiced as early as the 19th and 20th centuries. However, it wasn’t until after World War II, with soldiers returning from battle, that the concept become more seriously studied from a medical perspective. The practice drew skepticism from the medical community, but in 1950, The National Association of Music Therapy (NAMT) formed and The American Association of Music Therapy (AAMT) followed in 1971. Years later, in 1998, these two separate entities combined to form what is now known as The American Music Therapy Association (AMTA).

Over time, music therapy has become known as a reliable resource — not only for emotional support but for physical rehabilitation as well. At Jordheim’s, Advantage Music Therapy in Denver and fellow music therapist, Sarah Thompson’s, Rehabilitative Rhythms in Aurora — the two focus on individuals with neurological impairments. These impairments, whether genetic or trauma-induced, can affect speech and/or motor-function skills that many of us take for granted. With help from music therapy however, individuals are able to be more expressive and sociable than they normally are, while also exercising their motor skills.

“I think it gives them stability,” said Jordheim when asked what her sessions mean to those who participate (mainly young adults and teens). “I think it really helps them in their growth as young humans — that someone is with them and listening to them only and allowing them their creativity for that time we are together. I think that’s rare in most children’s lives whether they’re having therapy treatment or not — that someone is totally focused on you for that time and it’s okay for you to express yourself the way that you want to. You can be really loud on that drum and you can bang it and really make loud noises and you can keep doing that for 20 minutes and I will not stop you.” 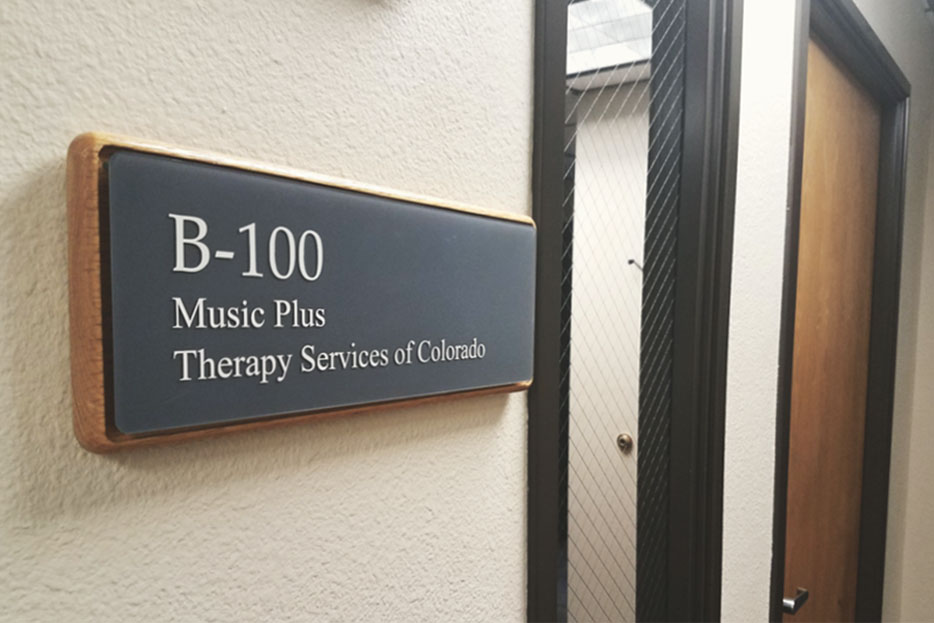 These therapists are by no means your friend playing, “Kumbaya” around the campfire — they’ve been trained and certified by the Certification Board of Music Therapists to take on their roles. A music therapist has to be educated on scientific and neurological functions — that is, how music is associated and how it can work to improve impairments in the brain. Often times, many clients and patients require a lot of hands-on involvement during the rehabilitative process — a process made harder due to the COVID-19 crisis. Despite the circumstances, music therapy has persisted.

The global pandemic, in all its chaos, provides music therapists with extended inclusivity to their sessions. “We’re actually able to reach people in geographic locations we normally wouldn’t be able to reach,” Thompson revealed. “For example, the group that we do for the Parkinson Association of the Rockies — we’ve had people join from other states even and actually had someone join from the UK as well.” All the music therapists we spoke to agree that they are ready to return to in-person services, but online sessions have been a great compromise in the meantime.

Impaired speech and motor function skills can often be a result of severe head trauma as well. And for those who experience head trauma, music therapy can work wonders, such as in the case of Gabby Giffords.  The former United States Representative was holding a constituent meeting in January of 2011, at a supermarket parking lot when a gunman opened fire —  shooting the former representative in the head.  Giffords survived the attempted assassination but was in critical condition with severe head trauma. Later, her doctor informed the public of his optimism regarding her recovery and as a part of her rehabilitation, Giffords participated in music therapy.

In videos that document her recovery, it’s clear how difficult it is for Giffords to speak. The gunshot wound caused interference between the part of her brain that translates her thoughts to speech. To cope with this, music therapists use singing to engage with her verbally since sentence structure and complex word formulation falls on the left side of the brain, but singing tends to use more of the right side of the brain. The former representative has since gained her ability to speak again, with a few impediments albeit, but it goes to show the power of music therapy. 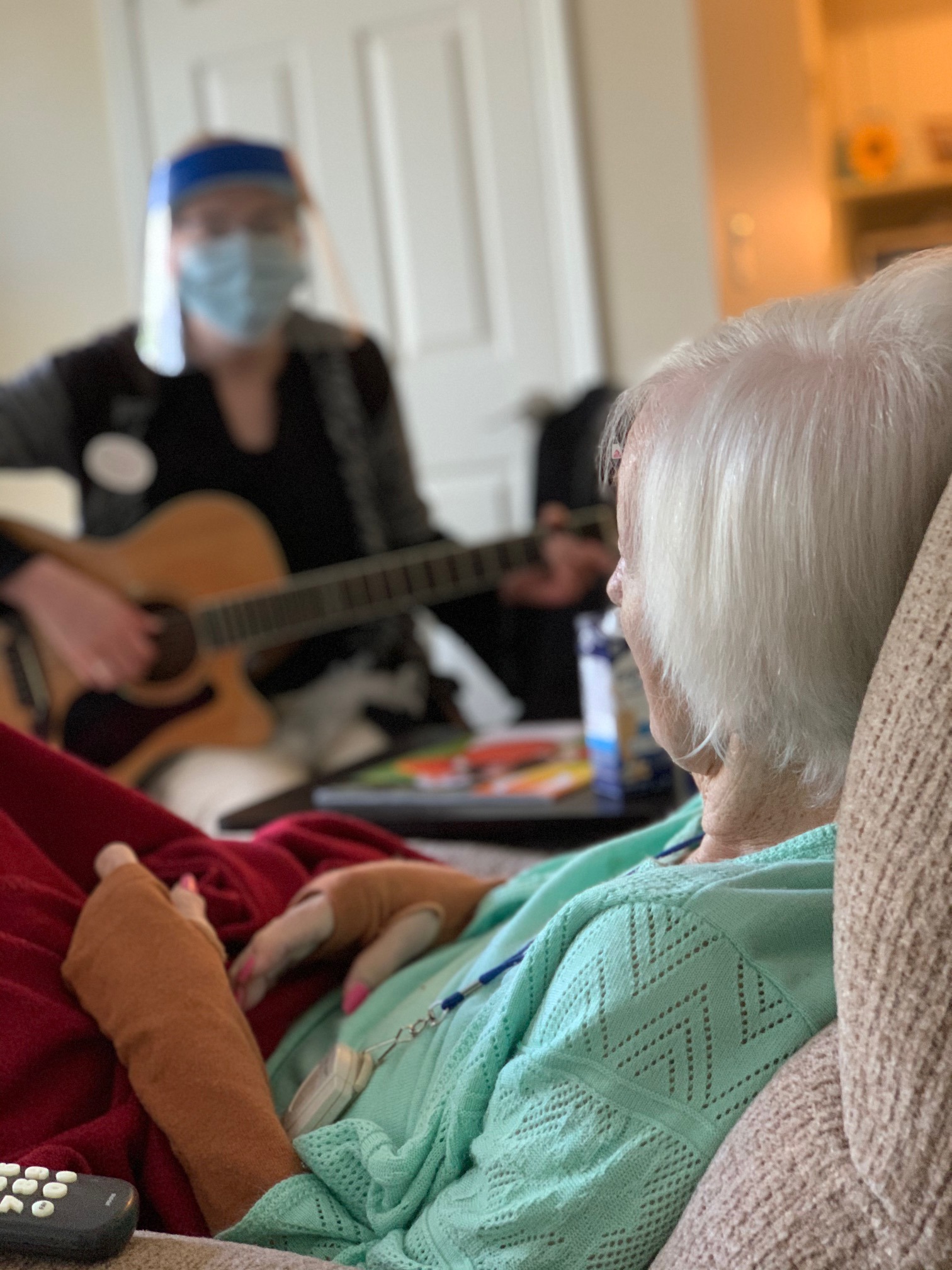 Whether it’s classical music to soothe, rock to liberate or rap to dive deep inside oneself, music has always provided a safe space for individuals. Bobbi Halfhill’s line of work, making that safe space readily available is a crucial part of her job. Halfhill also works as a music therapist in Denver, however, her patients are individuals looking more for emotional relief rather than physical or neurological rehabilitation. Halfhill works at Brookdale Hospice —  and her job can be as rewarding as it is tough.

Seeing people reaching the end of their lives is never a pleasant situation, but that doesn’t mean it can’t be a beautiful experience.

“I just miss — you know, I see patients in person, it’s like when you get on that same level, you’re in what I call the therapeutic bubble and when you’re seeing a show you’re kind of in this bubble of all the people who you’re in the same room with to see the said artist. When you’re with someone and sharing that, your heartbeats literally align. Your circadian rhythms sync together and I think that also makes a difference with the pain —  you’re there with them,” Halfhill said. 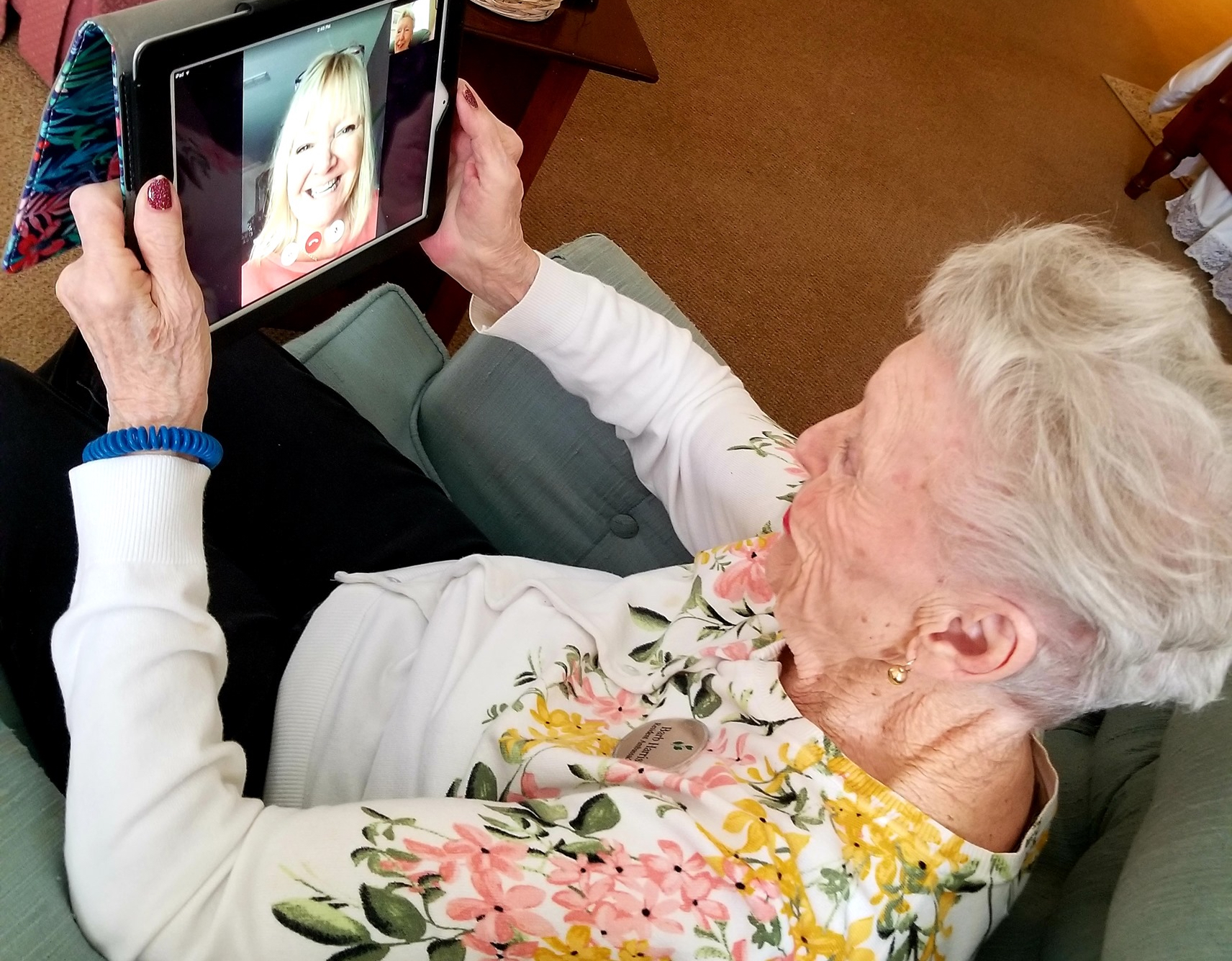 Mary Sileo, the daughter of a former patient of Halfhill, who has since passed, gave high praise to Halfhill and Brookdale Hospice for their music therapy services. “When you listen to Bobbi and Sara (her intern) you know and think —  these people can be on the road, being famous musicians — they’re that talented, and yet this is what they’re committing their life to, helping people die with dignity and comfort.”

Sileo’s father passed away on July 19 of this year, but even so, she seemed at peace with how the process played out.

“The truth is, the way it was formatted, he actually got to be a part of his own eulogy for many of us. It was like he was a part of his own funeral in hearing what people had to say about him. Which I just thought was so great, you know? It’s kind of what you wish — you wish you can attend your own funeral and hear what people have to say, and he did and so, that’s just kind of the silver lining to the challenge of not being able to be with him in person.”

It just goes to show that music can truly heal.  In a way we’re all healing, every minute of every hour of the day — music is simply a way to channel that healing in a more productive way. Take the time to really listen — heck take some time to dance as well, but as Sileo recommended, just, “Give it a try.”