What once started as a hobby for Denver designer Tyne Hall has now flourished into a full-time, successful career. “I spent most of my life thinking I would go to law school. I never really thought that I would become a designer. All of this really started as a hobby for me,” said Hall. Since that hobby took off, Hall has been featured in Denver Fashion Week for the past several years now and remains one of Denver’s most prominent and creative designers.

Constantly surrounded by some sort of creative project growing up, Hall is completely self-taught — something that is hard to come by in the fashion industry even today. Taking to YouTube to learn design techniques, Hall learned her skills through trial and error. The designer noted that fashion wasn’t always in her blood, especially as a kid. She didn’t care about how she looked, but that isn’t to say she wasn’t interested in fashion.

By the time she was in high school, Hall’s interest in fashion became less of a peripheral interest and more central. “I was, and still am, a very quiet, nerdy, lone-wolf type. Fashion was an armor for me. I used it as a way to protect myself from the horrors of high school. At some point I was known as the ‘fashion girl’ and I began to assume that identity,” she stated. Since then, Hall has really shed that skin, having a deep love and appreciation for fashion, the same one she had when she was a kid. Speaking with Hall, we discovered the many layers of her personality and work ethic that in turn, lead to the stunning pieces that make up her collections and overall success of her brand. 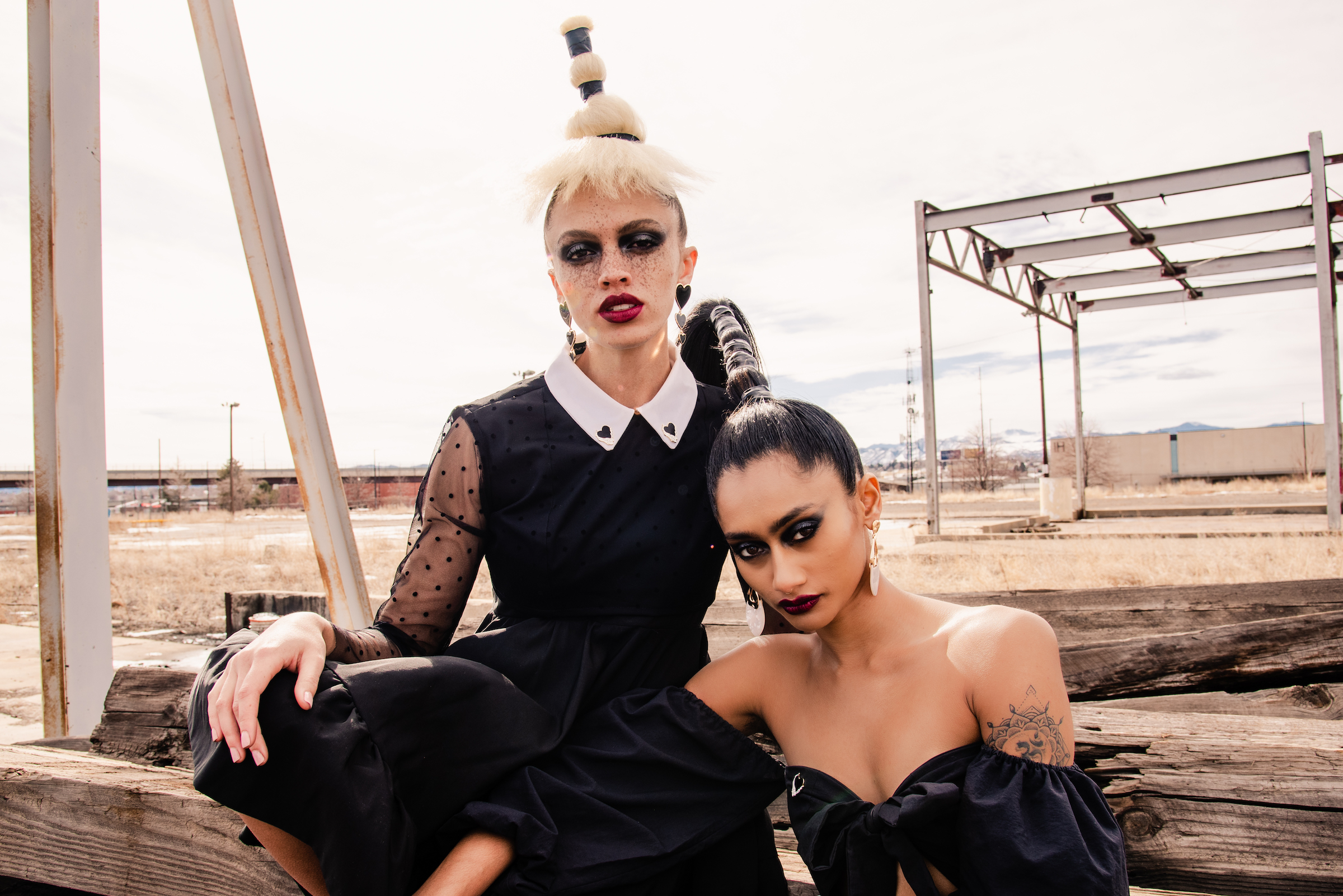 Admiring Hall’s work,  you will notice a strong sense of femininity combined with a seemingly opposing theme of grunge, goth and darker imagery. Designers across Denver and the U.S. are now, more than ever, attempting to mix what is considered feminine and masculine themes into their designs. However, Hall has flipped the script on what can and should be combined when it comes to fashion design.

But that’s not to say that all of Hall’s influences are in direct opposition. “I actually don’t think goth is opposite of femininity. Sure, goth is edgy, dark and dramatic, but romantic silhouettes are a central part of the aesthetic. I definitely emphasize the feminine and romantic more than the edgy in my designs than you may see in a lot of goth clothing, but that femininity is a huge part of the subculture,” Hall stated. Consistently intrigued by the dark shell that comes with goth culture, Hall continues to implement this influence into her delicate designs. Hall noted that she has always been intrigued by the dark more than the light, which is why she remains so fascinated with goth culture.

“On the surface, there is a harsh shell but underneath you find a softness and vulnerability. It’s very human. The first time I did a collection influenced by goth, I remember feeling like I finally found my aesthetic. I always felt like I had to hide my weird. The thing that I love most about gothic culture is the defiant embrace of all things strange. So, doing that first collection felt like an unearthing. I was finally able to be myself. “ 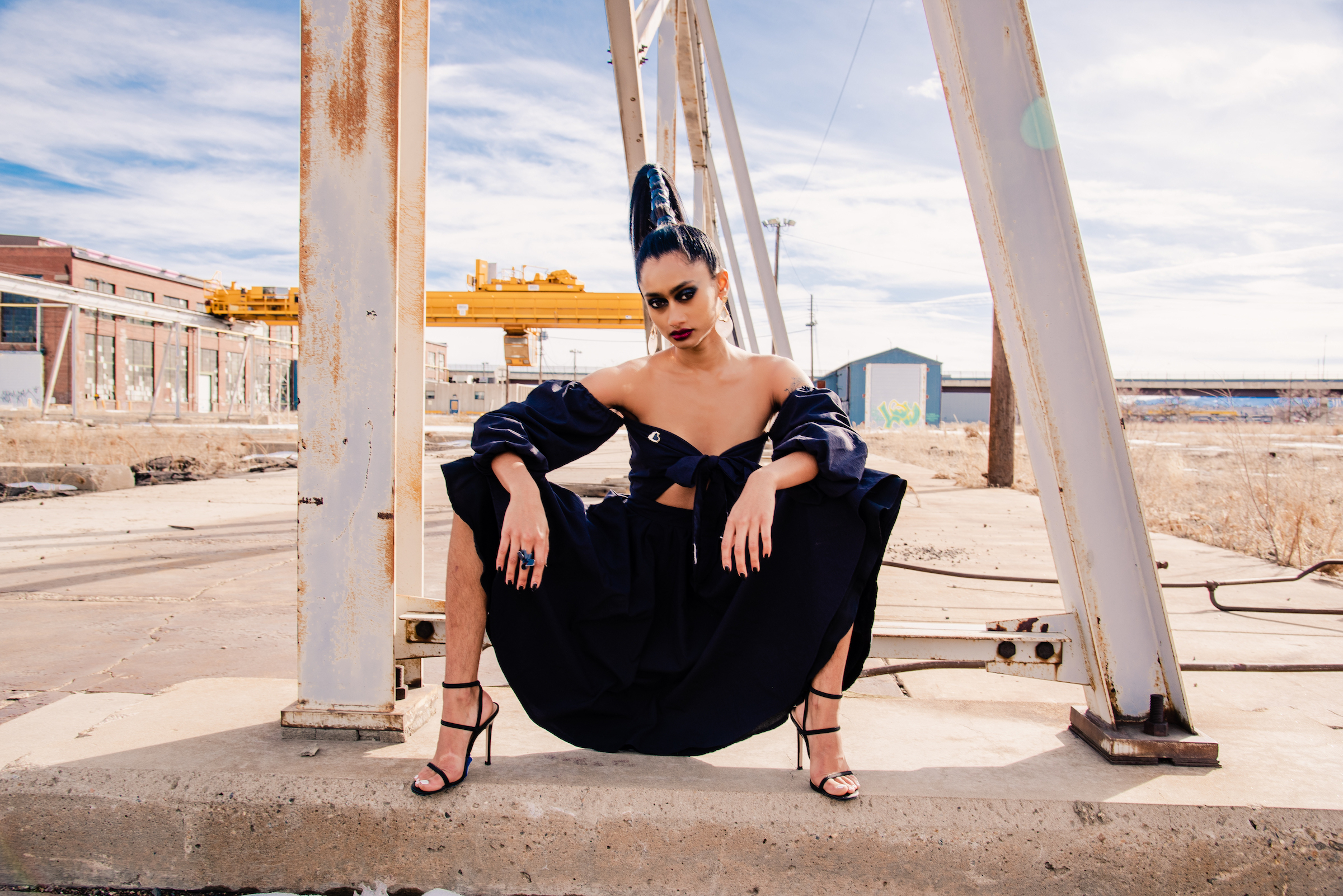 Despite the darker elements and feel that goth culture has, Hall makes it a point to play with the wittiness that comes from goth influence, bringing a “brighter” feel to the seemingly strictly dark images that people think of when they hear “goth.” “Sometimes goth culture is derided as being just a rebellious phase for teenagers to annoy mom and dad,” said Hall. As a result, she likes to joke and say that her clothes speak to the women for whom goth was not “just a phase.”

Hall is influenced by so many aspects of the creative industry, with goth culture only being one of them. For those who have attended Denver Fashion Week in previous years or have gotten the chance to see her designs in person — on the runway — it is clear that Hall is heavily influenced by music as well, routinely playing grunge music from the ’90s during her shows. Hall gravitates to the grunge genre of music as it is “imperfect, messy and passionate,” according to the designer. The music she chooses to play on the runway works as the perfect background of her feminine and delicate, yet goth-inspired designs, combining the two themes seamlessly. This seamless mixture was exemplified in one of her past shows in which she dedicated her line as a tribute to Chris Cornell after his passing.  “Chris Cornell was one of my favorite singers and his death really hit me hard. Typically, I don’t use a lot of grunge inspiration when I’m designing, but when Chris died, I wanted to do my own take on the grunge aesthetic in honor of him,” she said. Hall also noted that music is what keeps her sane so, it is clear why music has such a large influence on her work in fashion. 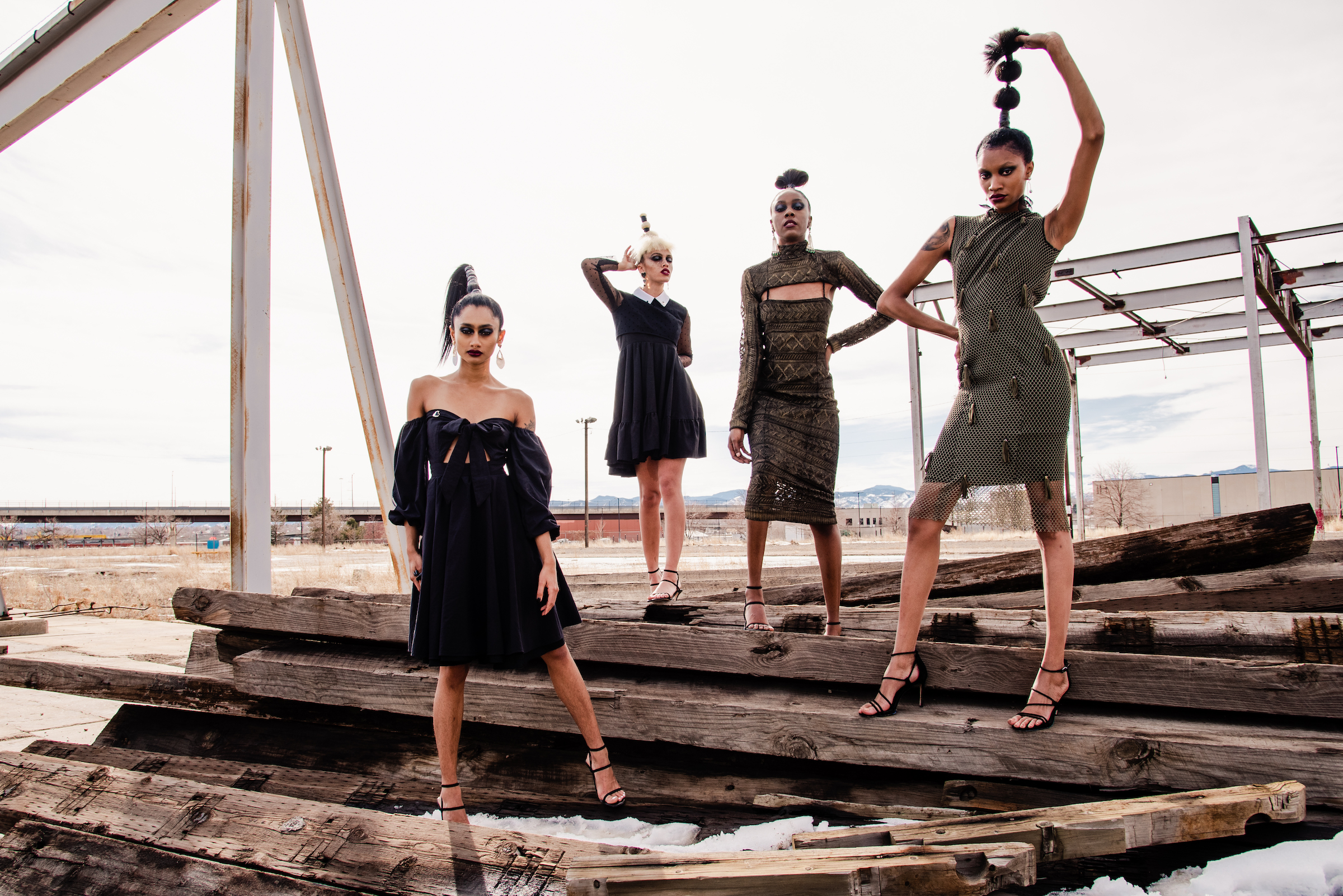 Earlier in her career, Hall explained that she would attempt to work around a story or some grandiose idea that would drive her designs and the feel of her shows. Idolizing renowned designer, Alexander McQueen, and admiring the emphasis he puts on the drama of runway shows, Hall now does the same, straying away from one storyline and letting the dramatization of the runway work in her favor. “Now, I see the power in the visceral,” Hall exclaimed. “McQueen was truly the master of making the audience feel, and that’s something I really strive for.” 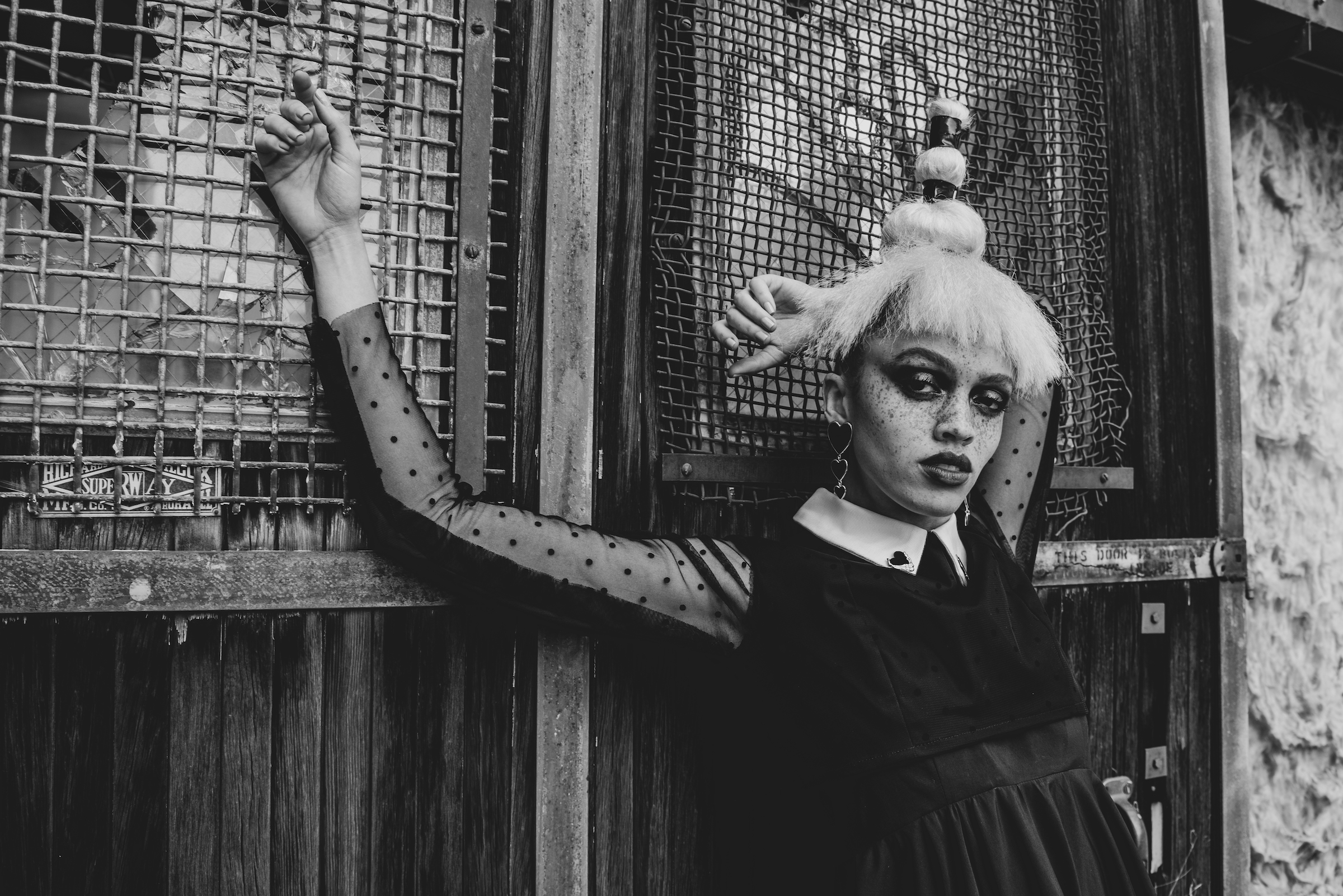 The Denver designer tries to create special pieces that are meant as adornment. “I’m not seeking to create an identity for someone; I want those who wear my clothes to still feel like themselves,” she elaborated. As a result, Hall’s designs are made for anyone and everyone to love — and ensuring that her designs and the experience of her shows are created for a diverse group of people is something that she prioritizes. We asked Hall if she intentionally chooses “non-typical” models to display her clothes on the runway, as she often has shorter models in her shows — something that tends to not be so common on runways today. Although having more petite models in shows typically isn’t intentional for Hall, ensuring a diverse model line-up is.

“The part of casting where I’m the most intentional is in diversity. As a black woman, it is extremely important to me that women of all colors are able to see themselves in my clothes. Fashion has a nasty habit of discriminating against women of color, so it is important to me that our beauty is represented in fashion.” 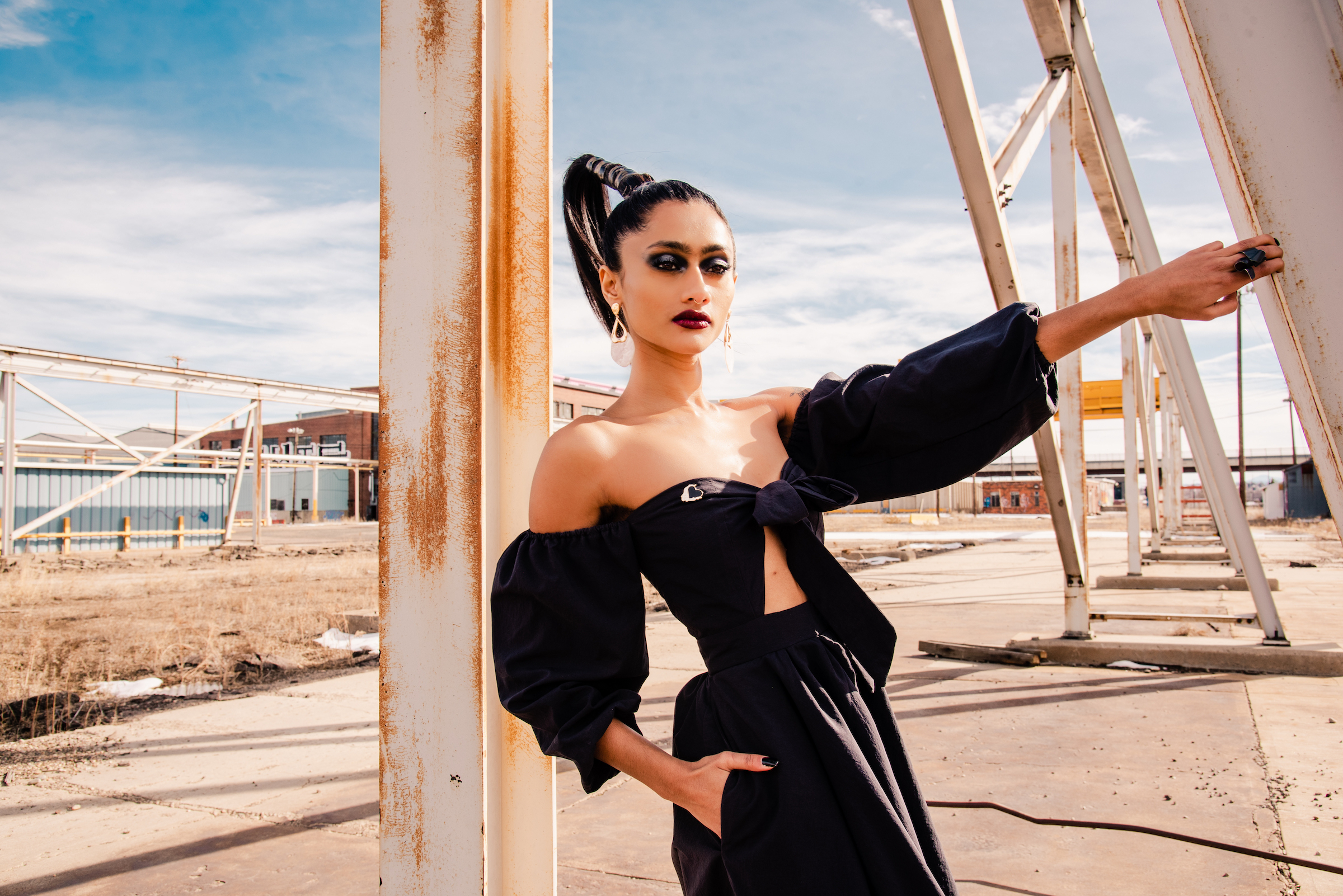 Hall’s design process is long, starting months in advance of a show, but her inspiration never runs low. From a struggle to find dark resort clothing to sitting in the Paramount waiting for a concert to start and admiring the light fixtures, Hall is the epitome of someone who finds inspiration in everyday life.

Creating a mood board is one of her first steps to help refine an idea, but she notes that she almost never ends where she started. Then comes the sketches where she begins to make the designs in her head something tangible. “I like to try to work out all of the design ideas during the sketching process so that my sketches act more like a blueprint. Every now and then I will change something once I’ve started production, but typically the early design phase is crucial in working out all the kinks,” Hall explained. The next step, she told us, is to start sewing. “Lately when I’m sewing, I like to watch Criminal Minds or Charmed, which I think is pretty on-brand,” she concluded.

The long design process Hall goes through every season for every collection is no small feat. She dreads being asked “what do you see for the future of your brand and for yourself in the fashion industry?” primarily because she claims to be an “indecisive weirdo” — so, future planning isn’t one of her strong suits. She does say, however, that she is so happy with how everything has grown and how she has really come into her own with fashion.

Wondering what we will see next from Hall remains exciting, knowing that she will continue to take influence from her day-to-day life and implement her love for different cultures, music and artists into her work. 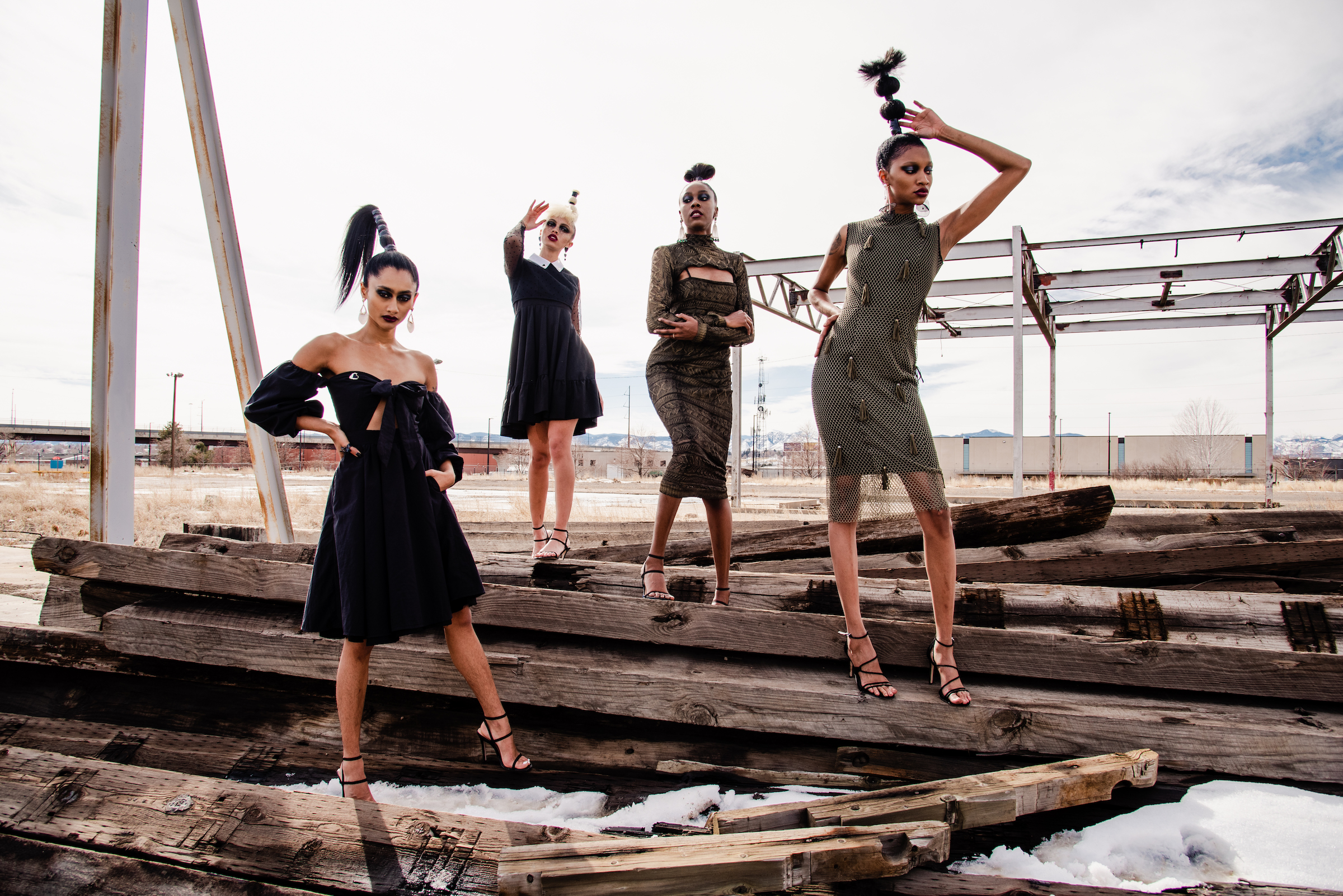