Loudspeaker Strives to Provide an International Voice for Independent Music

When NoCo FM decided they needed a rebranding, Loudspeaker wasn’t the first name they chose. “We were about to go with Rabble Media, and we were super excited for it,” co-founder Charles Kelly explained. After that was shot down by listeners on their Facebook page, they turned to Loudspeaker and found that the meaning behind the word matched their mission. “The idea of bolstering and extending the voice of our communities that we care about has been something that we wanted to do,” Kelly said. “We wanted it to be that megaphone — that loudspeaker for people to use.” 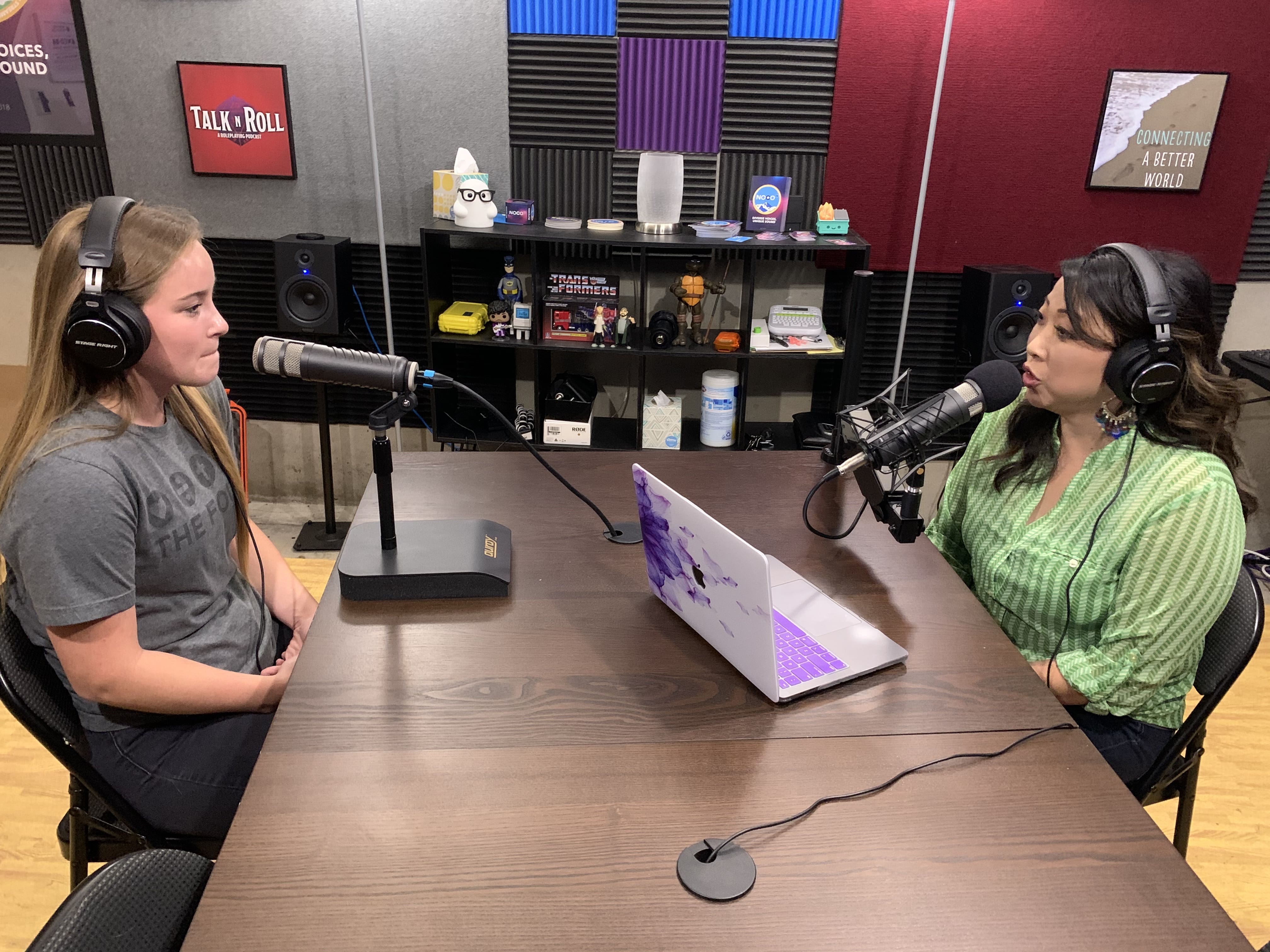 Co-founders Charles Kelly and Chris Lanphear originally met when they worked at a radio station together in Fort Collins. While Kelly was brought on to develop podcasting material, the radio station quickly decided to focus exclusively on terrestrial radio. “They had a complete shift in management — complete shift in focus — and we were like, ‘Okay, well now what do we do?’” Lanphear recalled. “I think Charles just texted me one night and said, ‘Why can’t we just do it on our own?’”

So, Lanphear and Kelly took the $400 in their bank account and began to build out their NoCo FM studio in Lanphear’s garage. They began with a single podcast, The Spark with Stephanie James,  and grew from there. James is a licensed psychotherapist and had experience with radio before. When Lanphear came along and asked James if she’d like to move from radio to podcasting, she jumped at the opportunity.

“We both really shared this vision of putting something positive into the world — something that was different and positive and really wanted to get that message out,” James explained. 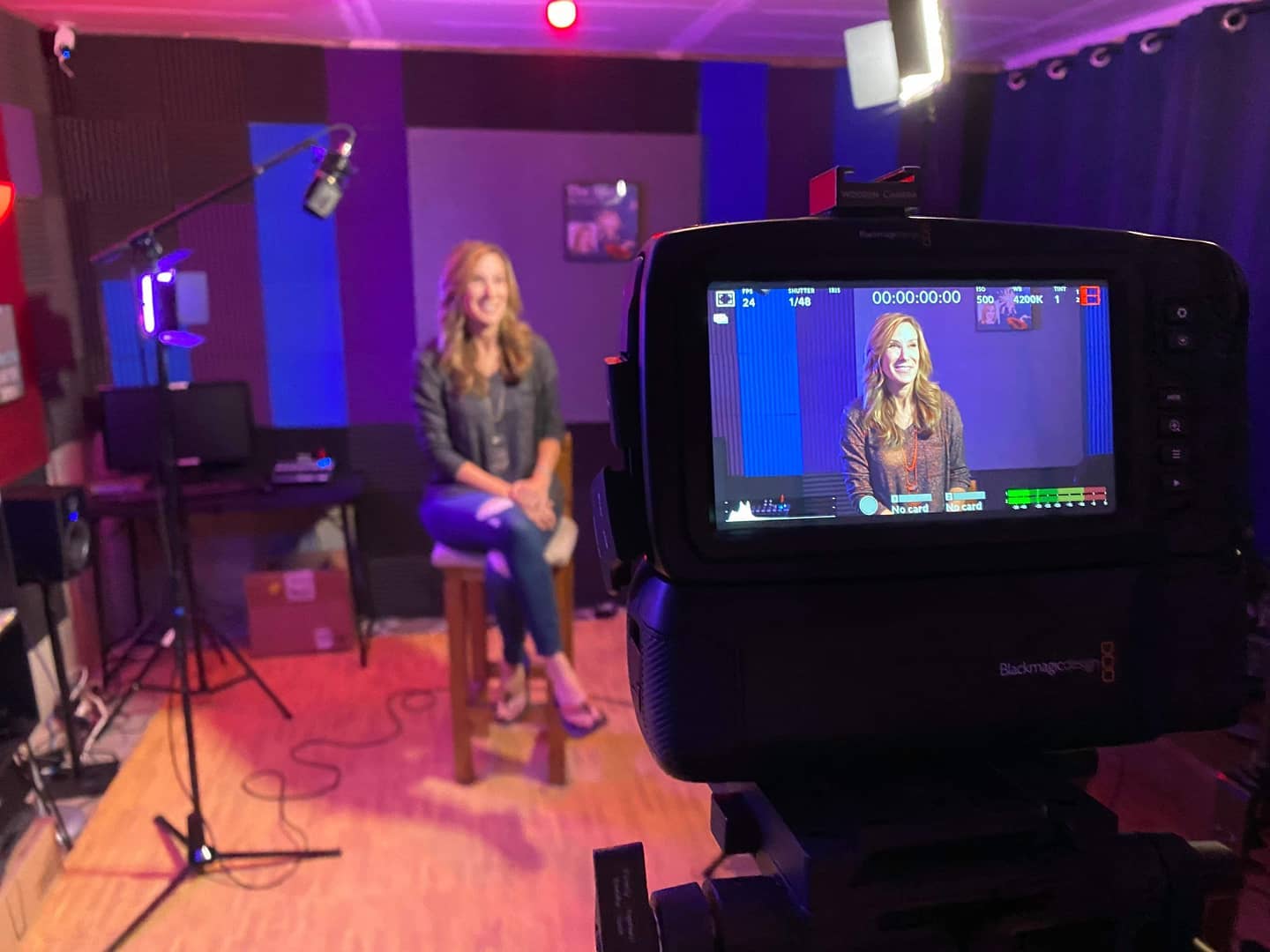 Originally, Lanphear and Kelly were very focused on amplifying voices within the Colorado community directly to the Colorado community. However, they quickly found their audience extended far beyond Colorado’s borders — even beyond U.S. borders. Lanphear described NoCo FM’s reach as being fueled by organic, human-focused stories.

“We have people listening in Guatemala, Peru, all over Latin America, Germany, and we’re not going out of our way to advertise to those areas. But I think that good stories travel well. So, as long as you do your job as a storyteller and really commit to telling a good story then it is pleasant to listen to. If it’s pleasant to interact with and you actually get something out of it, I think those stories will naturally find their audience.”

With the widening of NoCo FM’s audience also came the growth of their podcast network’s offerings. With 25 programs, some located in Oregon or California, among other states, NoCo FM quickly outgrew their Fort Collins branding. Thus, Loudspeaker was born. However, that’s not to say that Loudspeaker has abandoned its mission to bring Colorado artists to a national stage. “Obviously, Colorado is our home, and we want to spotlight people who are doing great things in Colorado, musicians, artists,” Lanphear explained. “That sort of thing is always going to be core to who we are.” 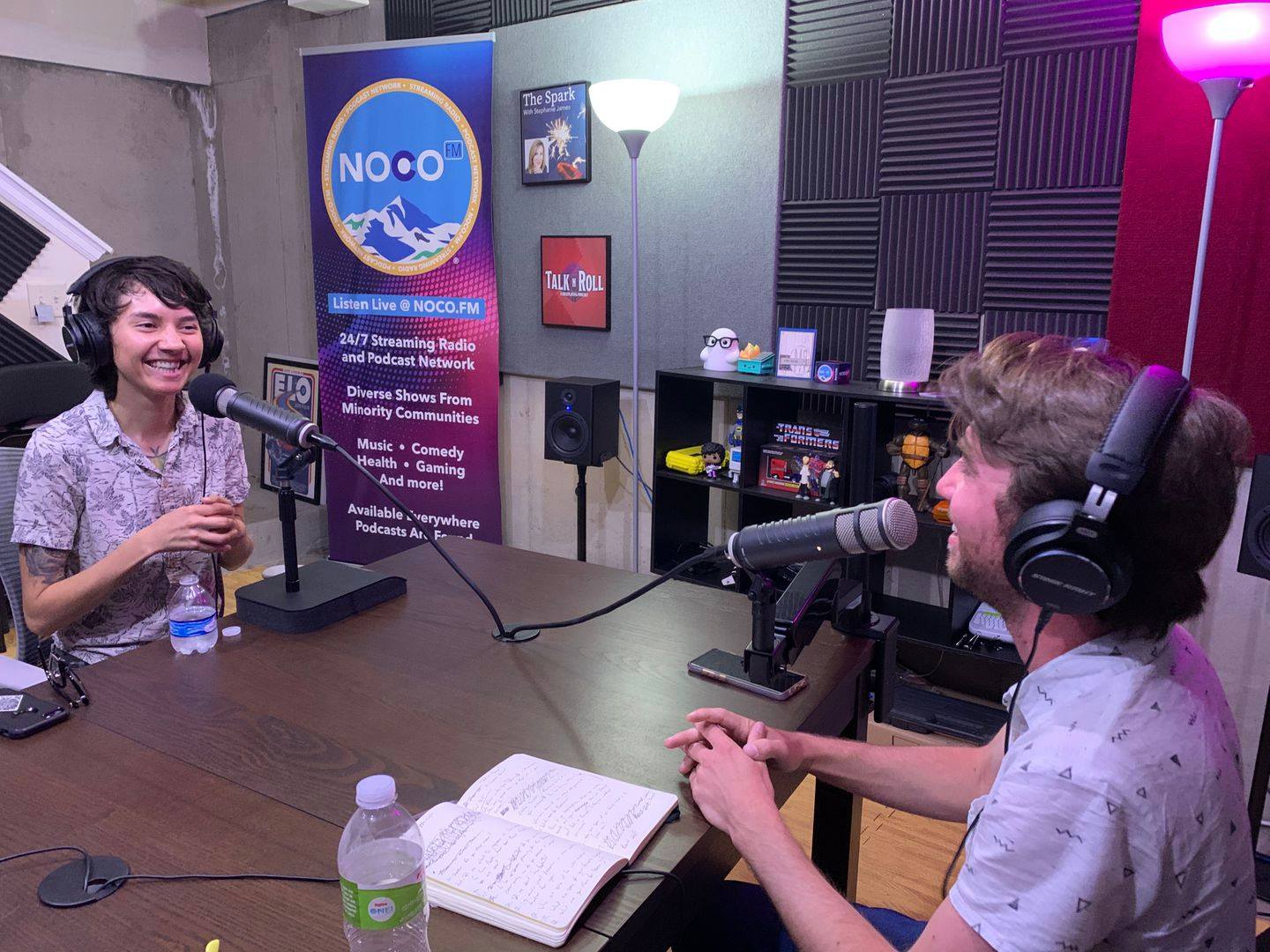 Another aspect core to Loudspeaker’s mission is cultivating a diverse lineup of podcasts. From NoCo Gaydio — a podcast highlighting LGBTQIA+ musicians across every genre — to Rolling Misadventures — a series of improvisational audio dramas inspired by tabletop board games — there’s a podcast for every audience member’s interests. Kelly explained why Loudspeaker is so intentional with their creation of widely varied podcasts.

“It all stems from a strive [toward] diversity. The straight, cis, white guy podcast is out there in the world, and you can listen to that. That’s great, if that’s what you’re wanting, but a lot of them are very similar. For me, as a listener, those podcasts — they’re boring. I’m all about expanding my worldview, and on top of that, supporting my friends who are people of color, who are in the LGBTQIA+ community. I want to give them a platform, not only because they have great stories to tell, but because they don’t have a space a lot of times. For instance, if you walk into a lot of radio stations across America, you don’t see that diversity, unfortunately. And that’s kind of what we’re trying to do — build that diversity because it’s important, it’s important to me, but it’s also important for storytelling in general.”

James is proud to have her podcast in the lineup alongside this distinct array of voices. As a psychotherapist, James hopes her show allows people to normalize the pains and difficulties we all feel in life. “My own personal mission is around helping individuals to find a voice — so then to work for a radio station where that’s part of their mission, there’s just so much in alignment,” she explained. “My personal mission for the show is really to bring as much love and healing to the world as possible, and part of that happens, I think, through being able to have these platforms for all these diverse voices.”

In addition to their diverse podcast offerings, Loudspeaker is launching with three streaming channels, including non-stop music featuring the Colorado musicians we all know and love, and talk programs like The Spark and ColoRadio, billed as “an exploration of the sights and sounds that make Colorado unique.” The majority of their offerings are music-based, highlighting the local music scene and focusing on stories in music that aren’t already well-known.

To launch Loudspeaker’s new identity, Lanphear and Kelly have created HallowStream, a free livestream event for Halloween night with a huge lineup of Colorado musicians, including Retrofette, Monalicious, Sugar Britches and Donny Blot, among others. The livestream will also feature a full drag show presented by Simon Hyperion and magic set from Denver magician James Lopez.

Lanphear and Kelly came up with the idea for HallowStream because of a passion for live music. One of the things they hope to provide for their audience is a version of live music once again. Working with three studios between Fort Collins and Denver, they’ve filmed nine sets of performances for people to experience during HallowStream. “Anybody can take their webcam and shoot something in their house, but it’s not the same as performing — doing a full-on performance in a place that a lot of people are going to see,” Lanphear said. “One of the things I love about music is how it brings people together through the communal live music experience, and to have not had that this year is just really, really heartbreaking.” 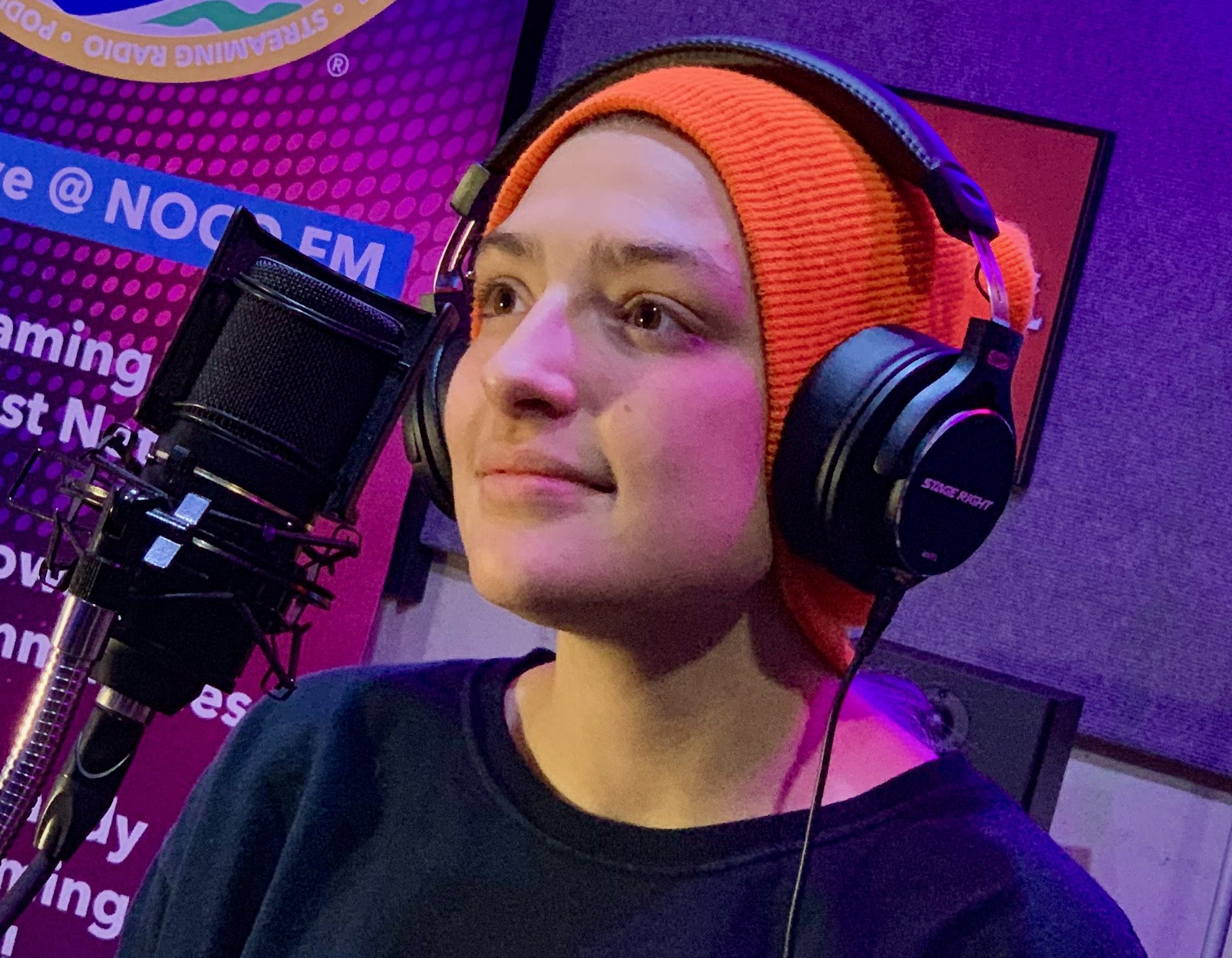 In addition to the quality entertainment planned, the livestream also serves as a benefit for the Colorado Music Relief Fund with all proceeds from the event donated to the charity. With such close ties to the music community in Colorado, Lanphear and Kelly have witnessed their friends have their livelihoods stripped away with COVID-19 making live performances nearly impossible. “We’re seeing these people that we rely on as a station to play music, these people that we rely on, not being able to support themselves,” Kelly explained. “What we want to do is give back to the people that really kind of helped us build Loudspeaker right at the beginning.”

Loudspeaker hopes that HallowStream will provide people with an opportunity to celebrate Halloween at home during this unconventional year. For a holiday where gathering with people and celebrating is pretty common, both Lanphear and Kelly hope that in addition to providing entertainment, their event will encourage people to stay home and still celebrate the holiday, but in a socially distanced, safe environment. “I mean, I’d be lying if I didn’t say that was at least part of the part of the reasoning for doing this livestream on Halloween for me,” Lanphear explained. “It’s like, well, we may have a captive audience because everybody’s staying home, so let’s entertain them and hopefully, we help them forget about things for a few hours and raise money for a really good cause.” 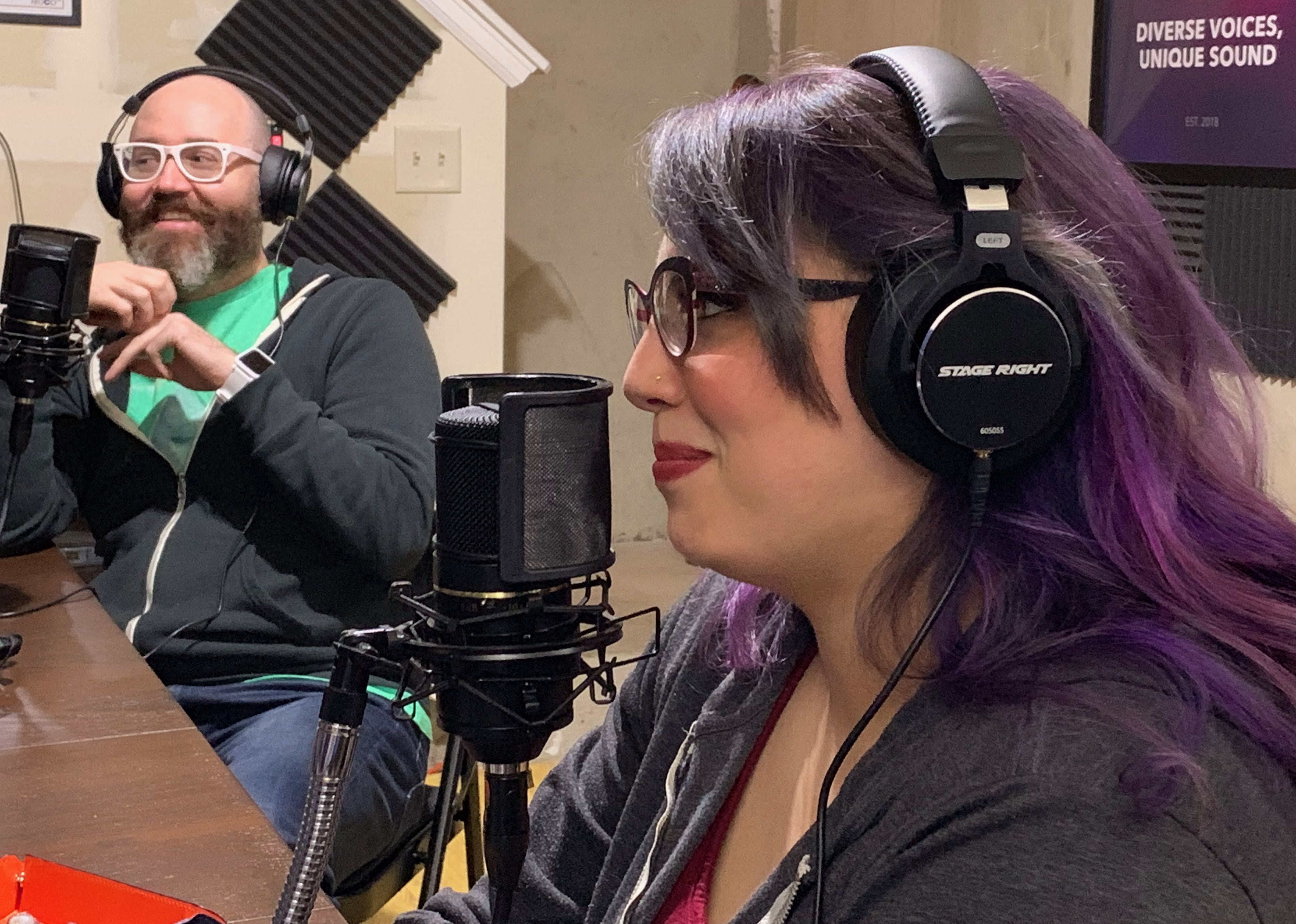 While Loudspeaker is continuing to grow in places outside of Colorado, they anticipate becoming an opportunity to bring the local community to an international platform. This rebranding from NoCo FM to Loudspeaker is just the beginning of their efforts to create a relatable experience for a wider audience, and they aspire to bring the Colorado community with them on this new journey. “We have found that there is an avenue for live events like this, and we’re primed and positioned to be at the forefront of that, to support our local bands, helping them out, and then growing our podcast network, as well,” Kelly explained. Lanphear emphasized this mission as well.

“It’s whatever we can do that helps bring communities together. We’re extremely proud to be based in Colorado and part of Colorado — I’ve lived here basically my entire life. We really feel it’s important to support the local community, because so much good work is being done here that a lot of people just don’t even know about — so much awesome. Music is being made here that more people don’t know about, and that’s a shame. So, the more that we can help expose the wider world to that, I think the happier we’ll all be and ultimately more prosperous as well.”

HallowStream begins at 8 p.m. ET/6 p.m. MT on October 31. Stream the event on their website, as well as on Twitch, YouTube and Facebook Live. Listen to Loudspeaker at any time at loudspeaker.fm.

All photos courtesy of Loudspeaker.