What You Need to Know About Denver’s New Restrictions

With a steady increase in COVID-19 cases across the state and nation, Denver is moving to enact more restrictions to contain the spread of the virus. Announced via a press conference on Tuesday afternoon, Denver is now moving from level two to level three for the safer-at-home order because all three indicators of hospitalization rates, cases and positivity are on the rise. Denver’s two-week case count currently sits at 385 — the highest it’s ever been since the start of the pandemic. In order to go back to level two restrictions, the city needs to bring that number down to 175 for two weeks. Adams County also recently moved to level three with Arapahoe now in level two.

“It could be a little while before we are able to be upgraded [to level two],” explained Hancock.

What are the Restrictions? 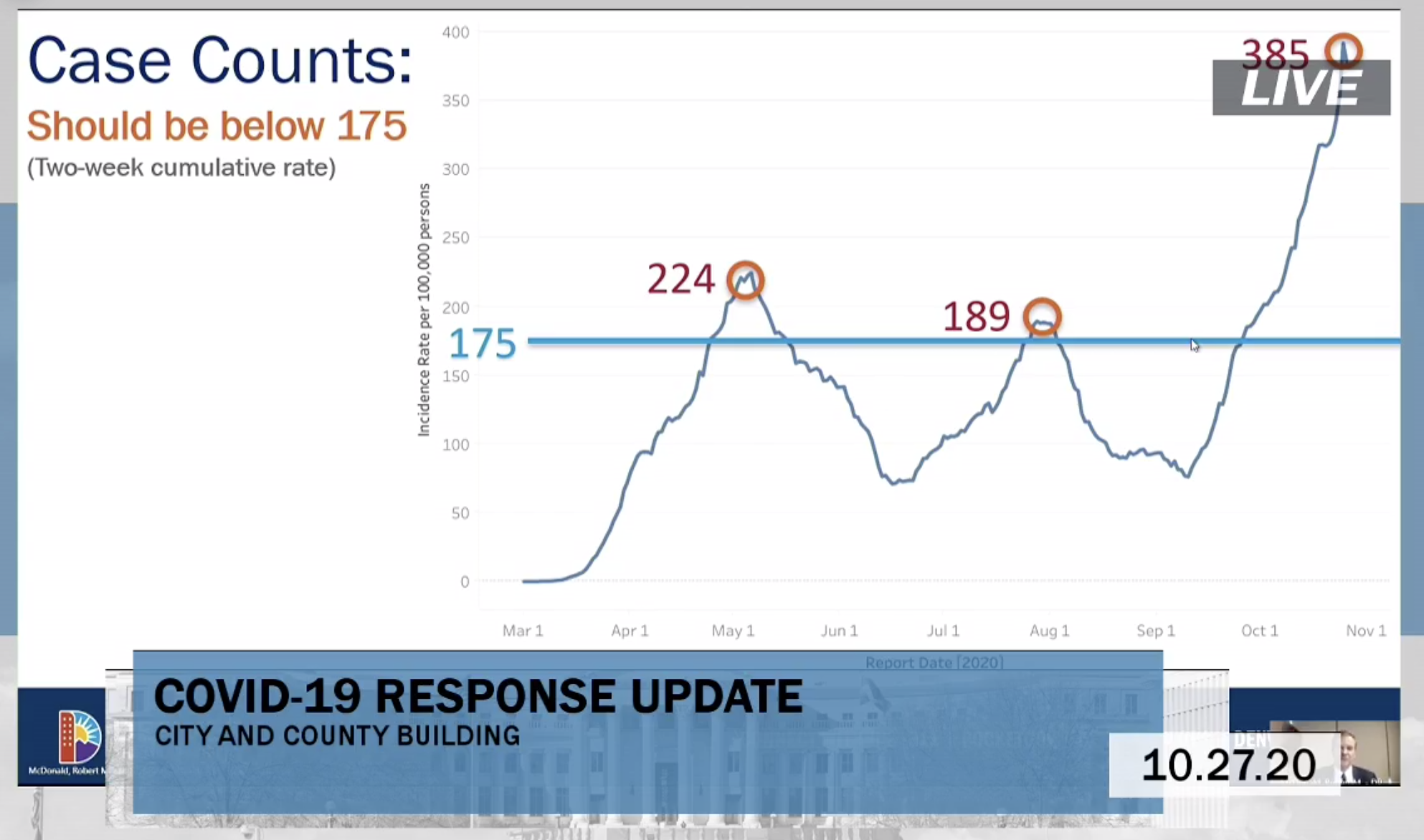 These new restrictions include reducing the current capacity limit from 50% to 25% for offices, restaurants, retail, personal services and more. Last call was also moved back to 10 p.m. Indoor events are now capped at no more than 25 people with outdoor events no more than 75. According to Hancock, this will not impact voting centers or for arts and cultural institutions that were granted capacity variances by the state (i.e. the Broncos). A later press release clarified Botanic Gardens, Denver Zoo and Cherry Creek Mall are also exempt. Per the press conference, the decision on whether to close Denver gyms in person was originally not decided. Now, it’s been determined they can stay open at 25% capacity.

READ: Where To Drop-off Your Ballot in Denver

For voters, Hancock stated that “vote centers are safe” as masks and social distancing are mandatory. But he encourages people to drop off their ballots at any 24-hour drop off box, as the mail-in date recently passed. Also, as announced on October 16,  only five people can gather in Denver whereas the state recommendations limit it to 10 people from two different households. Denver also has an updated mask mandate that requires you to wear a mask outdoors while with anyone you don’t live with.

As for those looking to celebrate Halloween — trick-or-treating isn’t canceled. Rather the city encourages people to only trick-or-treat with their families, wear masks and to not give out candy if you’re feeling ill.

Go here for a full breakdown on the different Colorado safer-at-home levels.

Bob McDonald, executive director of Denver’s Department of Public Health and Environment, explained in the press conference that alongside the increased case rates — rising positivity, an increase in all age groups, more hospitalizations and less ICU capacity is the cause for the new restrictions. And while hospital rates are not at the level they were at in March, McDonald explained that’s because people in their 20s and 30s are experiencing the highest level of positivity right now. He explained, they tend to rebound quicker than the elderly, who were the majority of the positivity rates back at the start of the pandemic. Regardless, McDonald is concerned about the upward trend:

“Hospitals could become overwhelmed in the next couple of weeks. It could happen that soon,” said McDonald.
If you’re wondering about the source of the current spike, McDonald explained that a few weeks ago many of them were coming for college campuses, but as restrictions have been in place for colleges, fewer cases are coming from there. Now they are “seeing a decrease in cases from [colleges] and now it’s more general.”
As for those skeptical of the positivity rates going up only because of increased testing, McDonald gave this explanation:
“I get this question constantly: Is the positivity rate going up because you’re doing more testing? This is absolutely not accurate. The positivity rate is going up. The more testing we do you’d generally see the positivity rate go down because we’d test more people that don’t have the virus. But that is not what we’re seeing. Early on in March, and as we increased testing, we saw that the positivity rate did just that. It was going down. But now with increased testing, it is now going up.”
—
The end to these restrictions are based on case counts, but McDonald explained if all other metrics move in the right direction, it’s possible it could happen before we get under the 175 case rate. The new rules are now in place but Denver businesses and institutions have until tomorrow afternoon to comply with the new restrictions.