Since COVID-19 began, local organizations Interfaith Alliance of Colorado and Colorado Village Collaborative have pursued a vision to help Denver’s homeless stay safe from the virus. By now, that vision — the Safe Outdoor Spaces project or SOS — has been stopped in its tracks twice, struggling to overcome public opposition.

But the groups are far from giving up, with hope that an event that took place the weekend of October 3 will help them gain momentum.

The alliance and collaborative have led a partnership of multiple nonprofits to build a replica SOS at Denver’s Belong Church, 1615 North Ogden Street. The unoccupied replica was open to the public on October 3 and 4, with residents invited to explore the replica and ask questions. 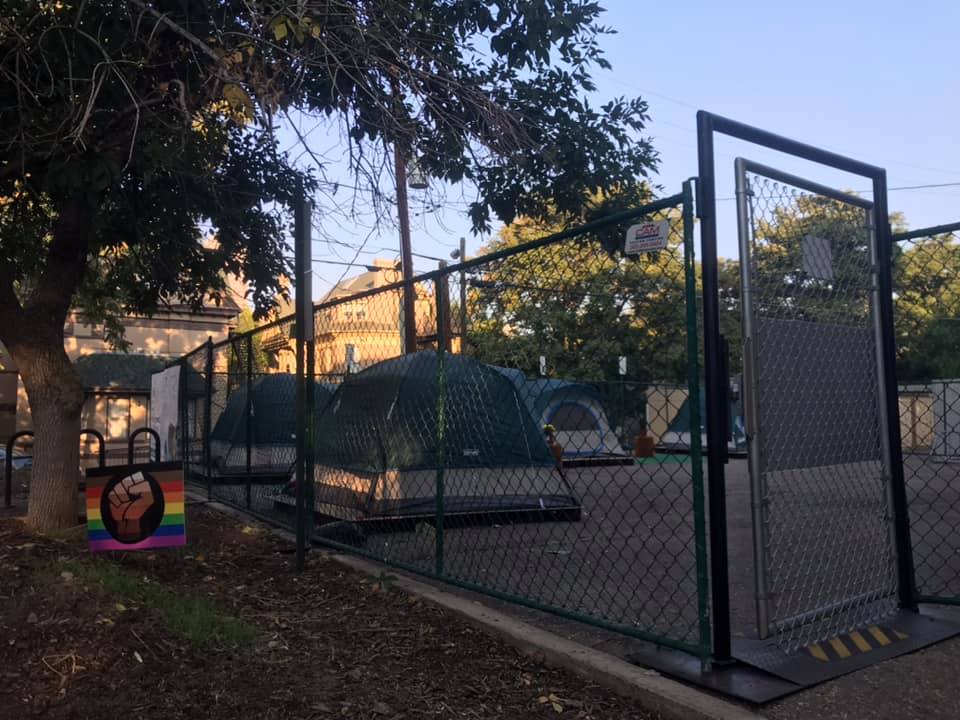 Tents inside the SOS replica at Belong Church, which was up the weekend of October 3. Photo courtesy of the Interfaith Alliance of Colorado.

The SOS would be a gated, managed, socially distanced campsite for the unsheltered homeless population. The purpose of an SOS is to be a temporary space for individuals to live and have access to services like meals, laundry, showering, wellness screening and others. At the site, individuals could also get connected with local resources for those experiencing homelessness.

“At the onset of the pandemic, we started talking with other organizations, advocacy groups and people on the streets to understand where the gaps were in Denver’s COVID homelessness response,” said Colorado Village Collaborative executive director Cole Chandler. “What we heard is that people who were unsheltered were really falling through the gaps. They didn’t have a place to wash their hands, they didn’t have the ability to shower and many services like public libraries, where people hang out, were closing down. With all that in mind, we advanced this proposal.”

The SOS would be staffed 24 hours a day. The project pulls from similar models in other cities, including Portland and San Francisco.

After the local partnership started its work in early spring, the mayor’s office announced its support for up to three SOS sites in Denver. Each site could host up to 60 people, for a total of 180 people. In the 2020 annual Point in Time Count, the Metro Denver Homeless Initiative counted 996 people living in an unsheltered homeless situation in Denver — and that survey was conducted before the pandemic hit, putting an even greater economic strain on many of Denver’s residents.

The partnership has since proposed sites in the parking lot of the Denver Coliseum and outside of the Blair-Caldwell African American Research Library, but both proposals have been unable to move forward after facing some opposition from nearby neighborhoods.

Chandler believes a portion of the opposition stemmed from misconceptions about the proposal.

“I think a lot of people thought we were just trying to sanction camping,” he said. “We wanted to provide people an opportunity to come and see for themselves and really understand what the model is.”

Through the replica, the partnership is doing just that. While a future SOS would not be located at Belong Church, the replica there showed how the concept would look when established at another location.

The replica is no longer up but a video tour of the replica is available on the Interfaith Alliance’s Facebook page.

For now, the groups plan to continue focusing on their community outreach efforts. Since the unveiling of the replica, they have moved a step closer to their goals with the Denver City Council approving a temporary zoning change that has made more land available to be considered for an SOS. The council also approved the transfer of $450,000 from Denver’s general fund to a COVID-19 emergency fund, which will help finance future SOS sites.

In the future, the partnership hopes to select sites that gain public approval, after which they would obtain any necessary administrative approval — which could come from the city council, Colorado Department of Transportation or another entity, depending on the sites chosen.

As for a timeline, nothing is set in stone yet. But after about 200 attended the open public houses and gave their feedback, Chandler said that on the whole, the event was encouraging to organizers.

“I’m sure we didn’t convince everyone, but I think we eased some concerns,” he said, “and it was nice to hear from the quiet support that exists for this.”