The drag scene in Denver has drastically changed as the pandemic continues and socially distancing has made its place in society. The impacts of those changes have greatly affected performers within the local drag scene – impeding their performances, their ability to adapt and most importantly, their income.

303 Magazine was able to hear from some local drag performers who shared their experiences of how they have coped and adapted their work to the current times.

Neurotika Killz, who identifies as non-binary trans (pronouns – they/them) started their journey in the Denver Drag scene in 2015 while going to Tracks Denver with their best friend (and season 11 winner of RuPaul’s Drag Race) Yvie Oddly. 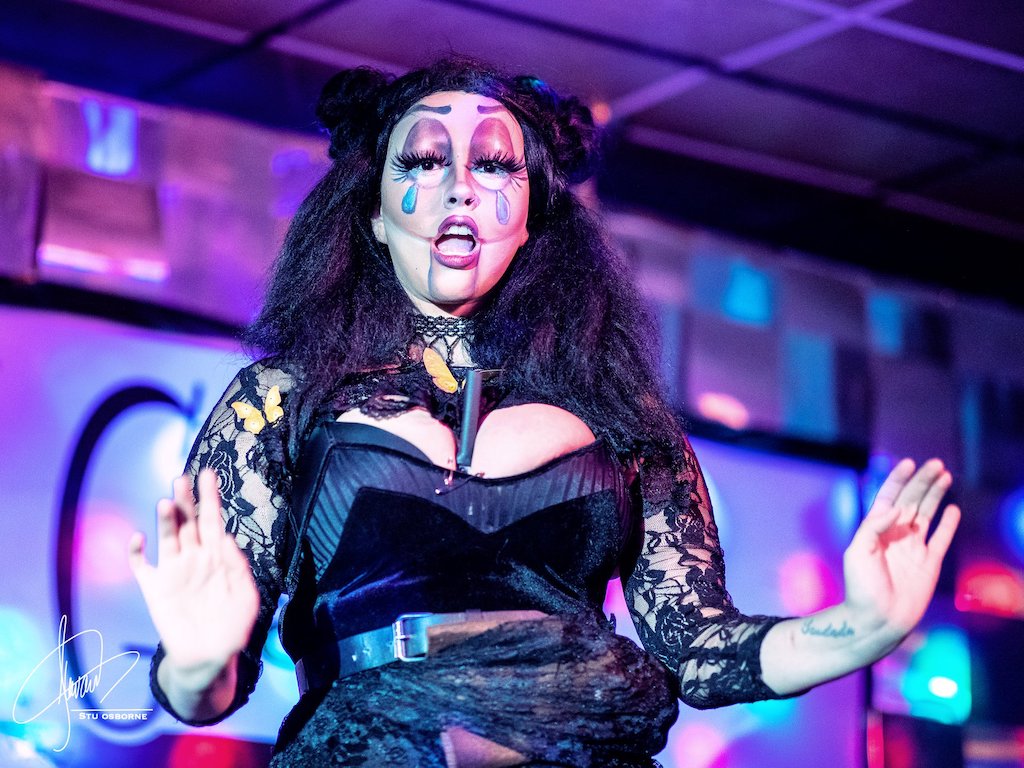 “Eventually, they brought me along with them to Tracks, where I watched my first Drag Nation show. They suggested that I start doing drag as a way to express myself, so I did! I began performing the following year, and the rest is history,” stated Heroine.

Before quarantine started, Heroine had performed at Gladys, Hi-Dive, and Blush & Blu and helped Neurotika produce a few of their shows. However now due to COVID-19, the two (and many other performers in the community) have seen a hit in their income and have altered the way they are performing as a result, as in-person shows were not a viable option.

Neurotika explained, “recently, because my mom and best friends are immunocompromised, I stick to very social distanced or digital drag. I would like to return to bars but digital drag has opened my eyes to a whole new and better way to do drag for me. I have a lot of anxiety in front of people so I can perform and express myself a lot more freely without the nerves!” 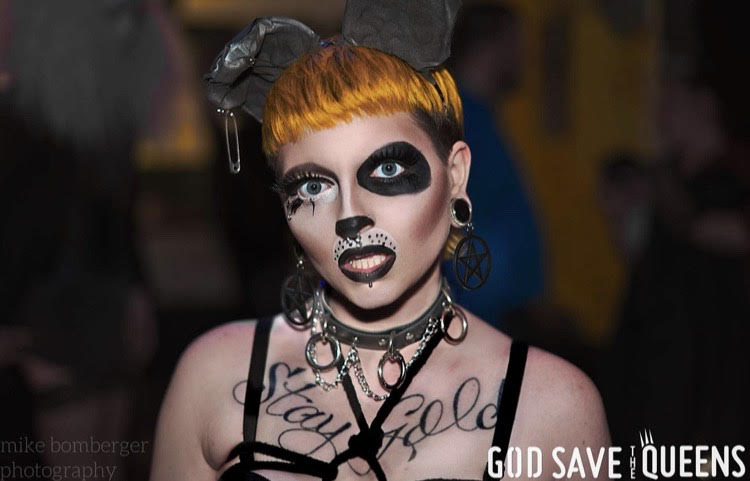 Heroine works at a dispensary and though they do not fully rely on their drag performances for their sole source of income, they expressed the difference their performances made on their financial and mental stability. “It has definitely become apparent how much I relied on tips or bookings as emergency cash. As an essential worker, I truly miss the release of going out and supporting friends or being onstage,” stated Heroine.

In many cases, those in the local drag community and many other fields were forced to apply for unemployment and rely on different funds that were available for performers. However, those funds have only helped so much.

Neurotika explained, “there were some performer relief funds at the beginning of COVID, and few specifically for Black performers during the uprise in Black Lives Matter, but as it wears on there is less and less. Luckily there are more opportunities for digital and in-person drag!” 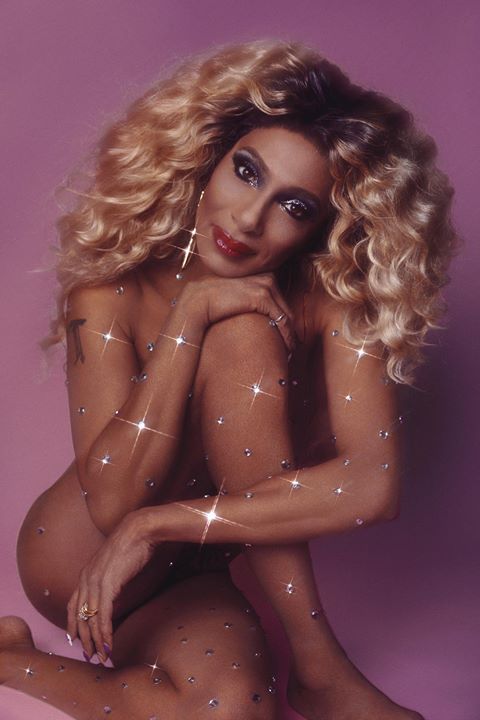 Felony Misdemeanor a veteran of the Denver drag community started their exploration into drag over two decades ago. Felony who would usually perform at Hamburger Mary’s, The Triangle and at XBar, explained their work has come to a halt. But even without the pandemic, Felony explains it’s not uncommon to be underpaid as a drag performer:

“I was able to apply for unemployment because I am unemployed. Drag came to a complete halt. Everything did. It’s just the past few weeks where drag started again and it’s still not enough to pay bills. Drag performers are some of the most grossly underpaid professionals, especially when it comes to our art. Outfits/hair/shoes/tights/pads/photoshoots/nails/makeup etc… all cost a pretty penny. The average drag performer usually doesn’t make ends meet after all the money spent [on] one look. A single look can easily cost $150+ when the venues are offering [to pay] $75. Using $150 as the average outfit and that the cast has to do two to four performances per show with three to five outfits (always need a walk around outfit) we average $450 to $750 in costumes alone per show! Yes, drag can be done at a cheaper price point but the way the community is, they don’t want that. They want the elaborate costumes, big hair, expensive shoes, fancy nails and if that’s not present “Are you really doing drag” is what I hear around town. Unemployment is necessary,” said Felony

Even though the pandemic has been catastrophic for those in the community who heavily relied on their performance work for income, there have been positive changes for performers. Some changes that drag performers have relied on to adapt to the situation included digital drag and more social media and online content interaction.

Heroine states, “I actually just filmed my first digital drag number, which I plan on releasing over the next week or two. I’ll be uploading it to Instagram, Facebook, and my Onlyfans account.” That digital drag number has now been released for viewing on each of the aforementioned accounts.

For Bambi Ballgag, who identifies as a nonbinary lesbian (pronouns- they/them), has drastically changed their performance but also learned new skills. They got into the local drag scene three years ago and would normally perform at Gladys and XBar but also has a day job as a caretaker.

“I don’t have any plans to perform in public until next year (or if they find a cure before then!) Because I work with children. I took a couple of month hiatus because I felt lost and uninspired, but I’m starting to do online gigs now which is actually really fun! I’m learning how to edit videos and I’m being forced to learn how to be all-around more tech-savvy with the help of my lovely friends,” stated Ballgag.

For drag performers who do still perform in public, changes have completely altered their acts. Felony said, “the changes made to my performances now are obviously the masks. We have to wear masks while performing which can make it hard to breathe and it messes up your makeup.  The social distancing of what used to be up close and personal is also tough to deal with. I’ve been performing for people for 20 years and now the crowd interaction/participation of the shows is not what it used to be. It doesn’t feel as personal as before, I feel I can’t connect like before. People aren’t paying attention as much because everyone is in their own bubble at their table.” 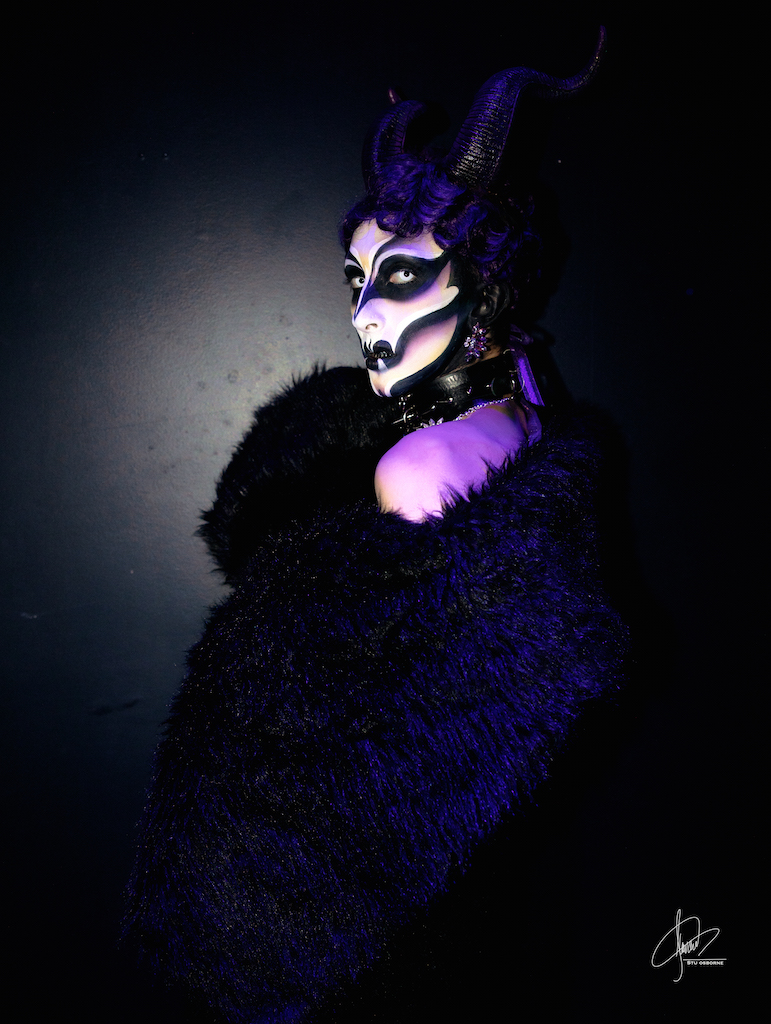 Along with these changes, many have taken the time to look inward and give themselves some much-needed self-love and self-exploration. “I have only become more expressive with digital drag. But in general, I am valuing myself more as a performer and not working for drink tickets or tips anymore period. This pandemic has really helped me learn to value myself and my art more,” said Neurotika.

As well as self-exploration, different performers have been taking the time to get involved with social issues and exploring how they could contribute to those around them.

Transwitch is a drag performer who identifies as trans nonbinary (pronouns – they/them or she/her) started to explore the Denver drag scene five years ago as they went to queer bars and experienced drag that wasn’t the stereotypical cis-man presenting themselves as a cis-woman. They were later inspired by drag performers such as Lisa Frank, Neurotika Killz and Heavenly Powers to start their own performances. They explained that BLM has actually caused them to take a step back from drag to allow space for others.

“.. I decided that maybe art wasn’t the best use of my time. Maybe it’s not my voice that should be heard … So COVID has affected my drag specifically in so much that, I decided to just take a step back from performing and producing a lot of art and spend more time focusing on like the people around me who close to me,” explained Transwitch. 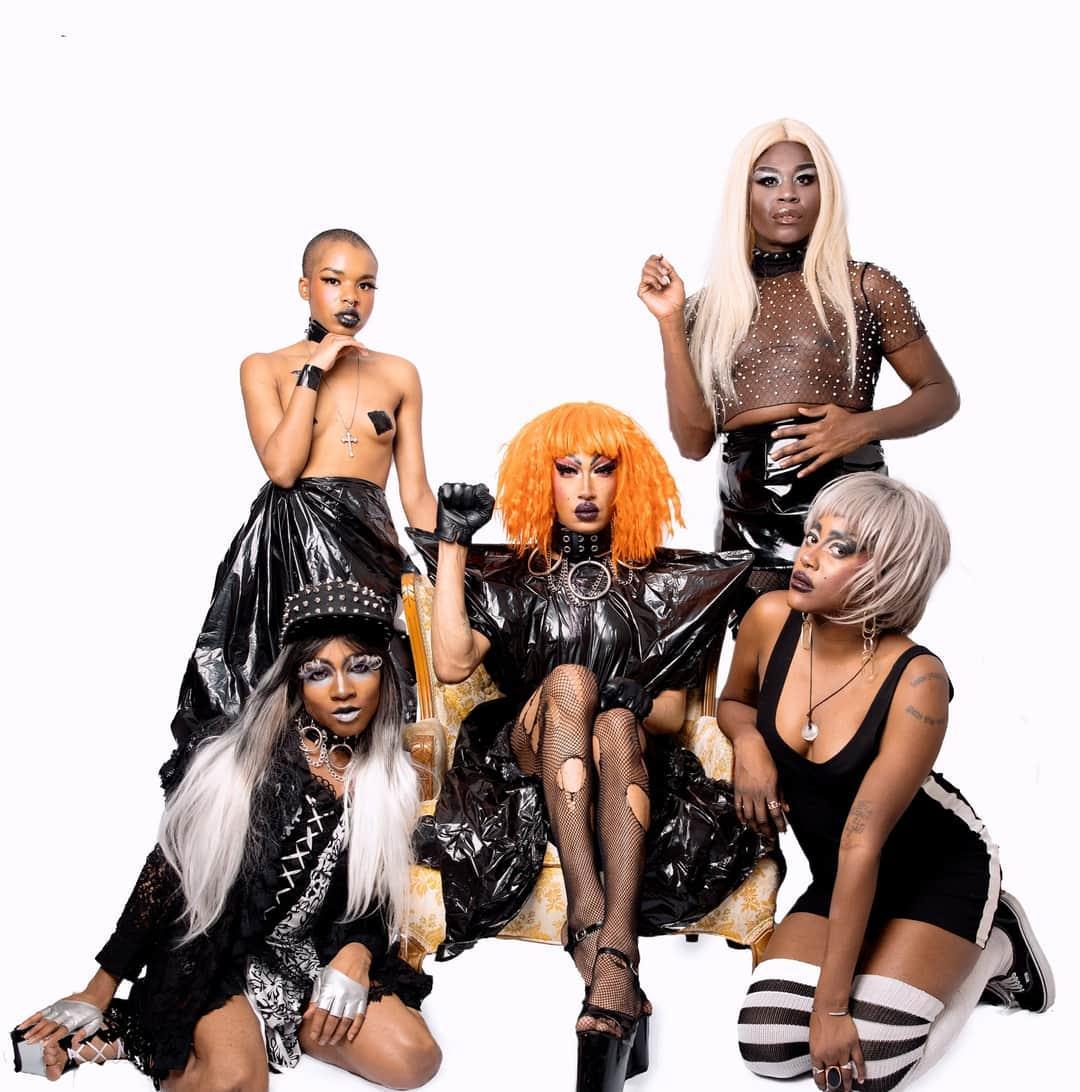 Lisa Frank in the center of members of House of 666. Athena Sylvers at bottom left, Craqwhora 666 at top left, Koffee Cakes 666 at top right and Titty Leaks 666 at bottom right. Photo by Stu Osborne.

Along with social media and digital drag, other avenues have been starting to take shape. One option that is becoming more popular and mainstream is Onlyfans. The online platform allows people to upload their content and have individuals subscribe to that account for a fee while having the ability to give tips. The subscription also allows for more personalized content, making for a more interactive experience.

Heroine explained, “I started using OnlyFans about a month ago, and I’ve really been enjoying it so far. There’s not really any fear of having my content reported or taken down, and it feels a lot like an actual club experience — paying a fee at the door (when subscribing to someone’s page) and then tipping if you enjoy what you see.”

Transwitch stated, “…I’ve always used my platform to talk about is about the validity of sex work as a profession and specifically the policing of trans bodies and feminine bodies, trans feminine bodies. So I decided to start an OnlyFans, partially to subsidize my income but also partially to explore my sexuality and how that intersects with my drag. Because for so long I expressed most of my sexuality through my drag. So I decided to try and blend the two together.”

Bambi exclaimed, “I think using Patreon and OnlyFans is amazing … The people who have supported my Patreon really keep me going, they’re all so kind and respectful. Every drag artist interested in at home drag should definitely get one.”

Lisa Frank, who identifies as trans non-binary (pronouns- they/them or she/her), has found a way to combine a bit of both online and in-person shows. Starting their drag journey in Little Rock, Arkansas, Lisa is also the mother of the House of 666 – an all-black drag house in Denver.  She now has moved to digital drag using social media platforms and a half digital, half in-person show called UFO (Unidentified Freaky Objects) that features alternative drag, queer performance art and predominately black and brown performers and more.

“It’s open for anyone really to just explore their creative side,” they said. 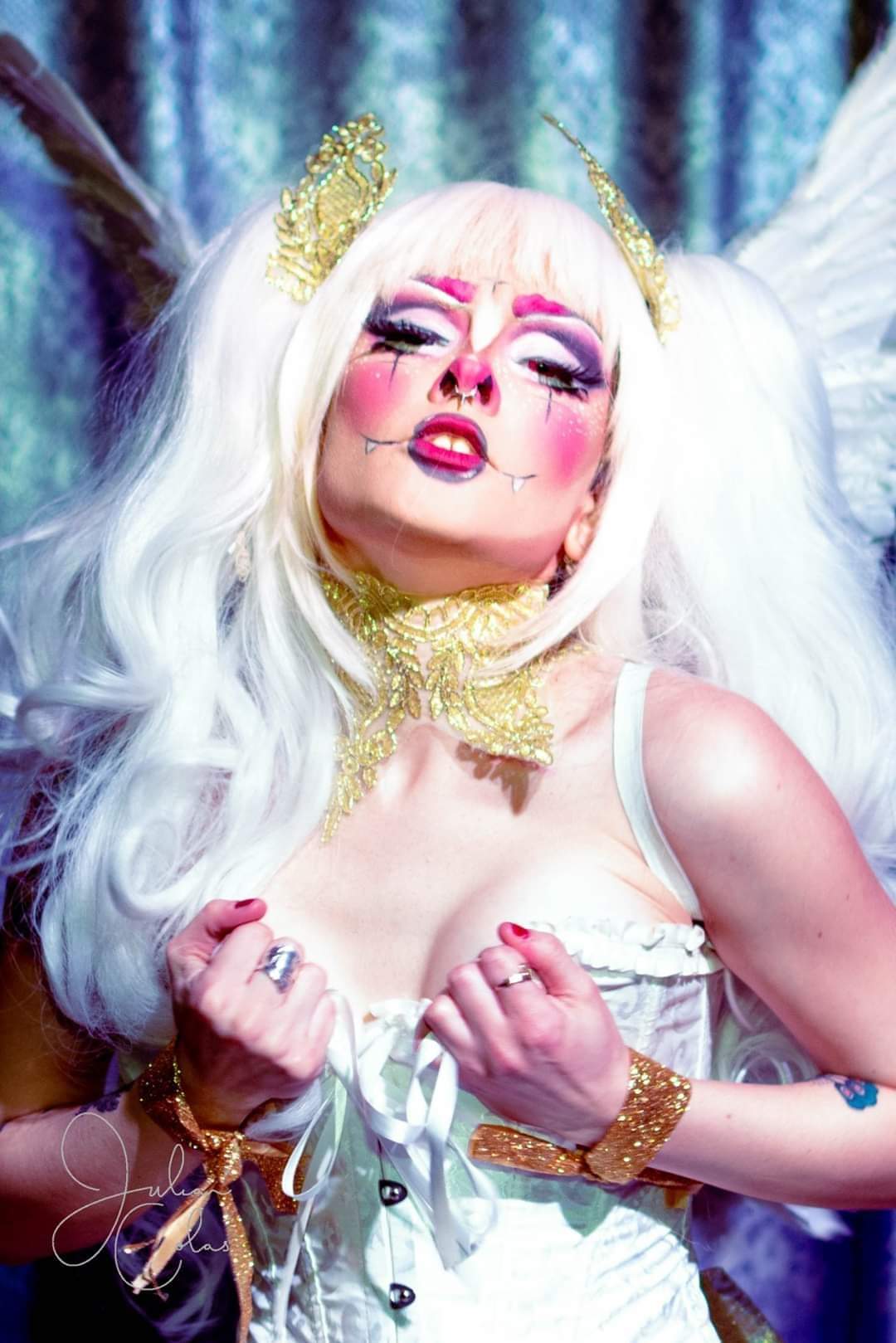 Due to ongoing social distancing policies and quarantine measures, the Denver Drag culture has been completely altered. With the changes to the community, the future of the craft and performers have been altered as well.

Bambi expressed their newfound understanding of their own performances, stating, “this pandemic has forced me to contemplate and reflect on why I should do drag, versus feeling like I’m forced to do drag out of fear of becoming irrelevant. Now I’m creating art that I want to do instead of what I think will be palatable to others.”

Other performers such as Transwitch explained that the future could hold new opportunities for those who are and were disenfranchised, especially with the current BLM movement. Transwitch explained they want to see more Black trans performers continue to push the boundaries and take up room in white spaces. “I’m hoping for more continued growth,” they said. “I want to see this momentum not to be lost.”

Lisa also expressed a better future of the local drag community through a merging of both digital and in-person events. Explaining some people’s strengths may lie in this realm. “I think it’s interesting because some people may really be great at performing live and some people may not be good at performing live but they may be amazing at creating immaculate video production. So I think it definitely will change how we consume drag… I think it could change for the better.”