As more art galleries begin to reopen after COVID-19 closures, Museum of Outdoor Arts (MOA) has done so while unveiling a long-awaited exhibition. Rauschenberg: Reflections and Ruminations is MOA’s latest show and features art by the late Robert Rauschenberg. Rauschenberg is considered to be one of the most influential American creatives of modern time — most notable for informing the Pop Art movement of the 1950s.

The show opened in February and was originally set to close in June — yet due to COVID-19, the show has been extended to March of 2021 — giving Rauschenberg fans plenty of time to view the exhibition. The museum is featuring more than 50 original artworks by the artist — making it the biggest Rauschenberg solo show ever displayed in Colorado.

Tim Vacca, the director of programs at MOA, said “This exhibition features works that have rarely or never been seen publicly. Our indoor gallery space, along with capacity restrictions we’ve put into place, offers ample space to view these works in a very intimate setting. It’s a great opportunity to see a survey of over 50 years of works by one of the most influential artists of the 20th century.” 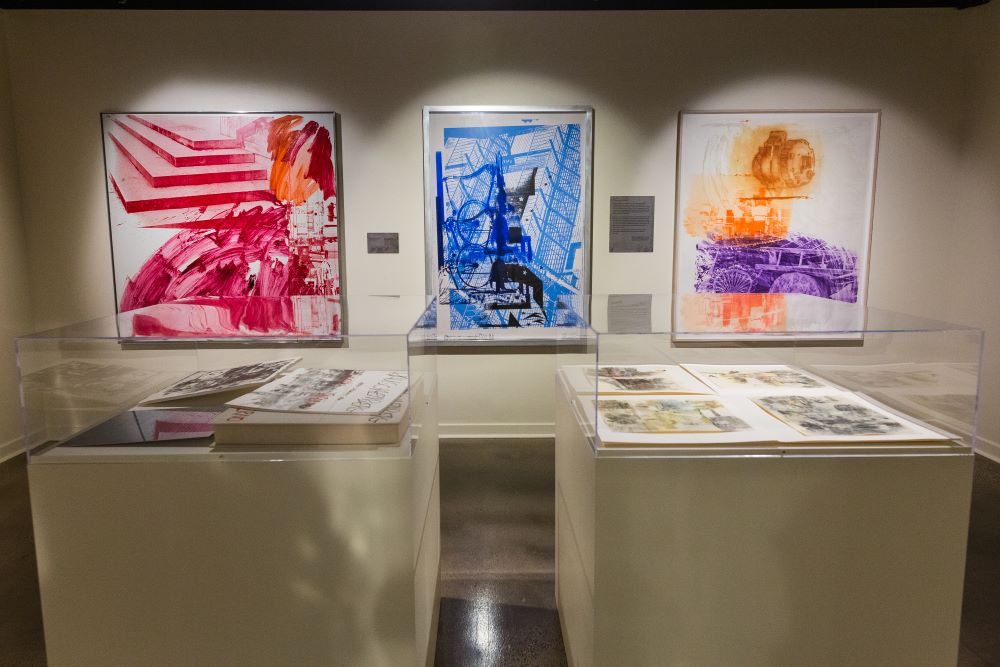 According to MOA — this show truly is unique. Rauschenberg’s works are usually displayed at large art institutions in cities like New York, Paris and London. Having a large solo show in Englewood, Colorado is a rare opportunity. Rauschenberg was widely known as a collaborative artist — even beginning a program titled the Rauschenberg Overseas Culture Interchange (ROCI)— where he visited ten countries and created collaborative works with artists worldwide.

“Robert Rauschenberg was constantly growing and pushing the boundaries with his work,” Vacca explained. “He coined the term ‘combine’ with his integration of painting, sculpture and other media.”

The exhibition includes a number of these famous mixed media pieces, as well as works from the ROCI. According to the Robert Rauschenberg Foundation, he “believed in the power of art as a catalyst for positive social change.”

“There’s certainly a lot of that going on right now all around the world and one can only imagine what Robert Rauschenberg’s response through his artwork would be in the challenging times we are all facing,” Vacca said. “No doubt, he would have a response.”

Museum of Outdoor Arts is located at 1000 Englewood Parkway. The exhibition is open Monday through Thursday, 10 a.m. to 6 p.m. and Friday and Saturday from 10 a.m. to 5 p.m. Tickets are $10 and must be purchased online in advance. Only a limited number of tickets are available at various times to encourage physical distancing.