Meet the Denver Photographer Fighting Back Against Police Brutality Through Art

Following the deaths of George Floyd, Breonna Taylor, Ahmaud Arbery and countless others — thousands across the country have turned to protesting to demand justice and reform. The events of the past week have created a nationwide conversation about police brutality, social justice and anti-racism. In Denver, hundreds of people have taken to the streets carrying signs and voicing the need for change. Amidst the growing mix of voices calling for action — one Colorado native is using his art to support the movement. Brenden Matthews is a Denver based photographer who has recently gone viral for one powerful photograph.

The photograph — titled “UNARMED” — features a black man wearing a sweatshirt with the word “UNARMED” in striking letters. A gun is being held to his head and instead of blood, Matthews used red smoke grenades to give a similar illusion. The photograph is implied to be graphic and often makes viewers uncomfortable — which according to Matthews — is exactly the intention.

“Nobody likes getting pulled over, but when black people get pulled over, we’re constantly thinking: ‘Are they going to pull me out? Are they going to throw me on the ground? Am I going to die?'” Matthews said. “I wanted that same level of fear and uncomfortableness to reach those who view my art.” 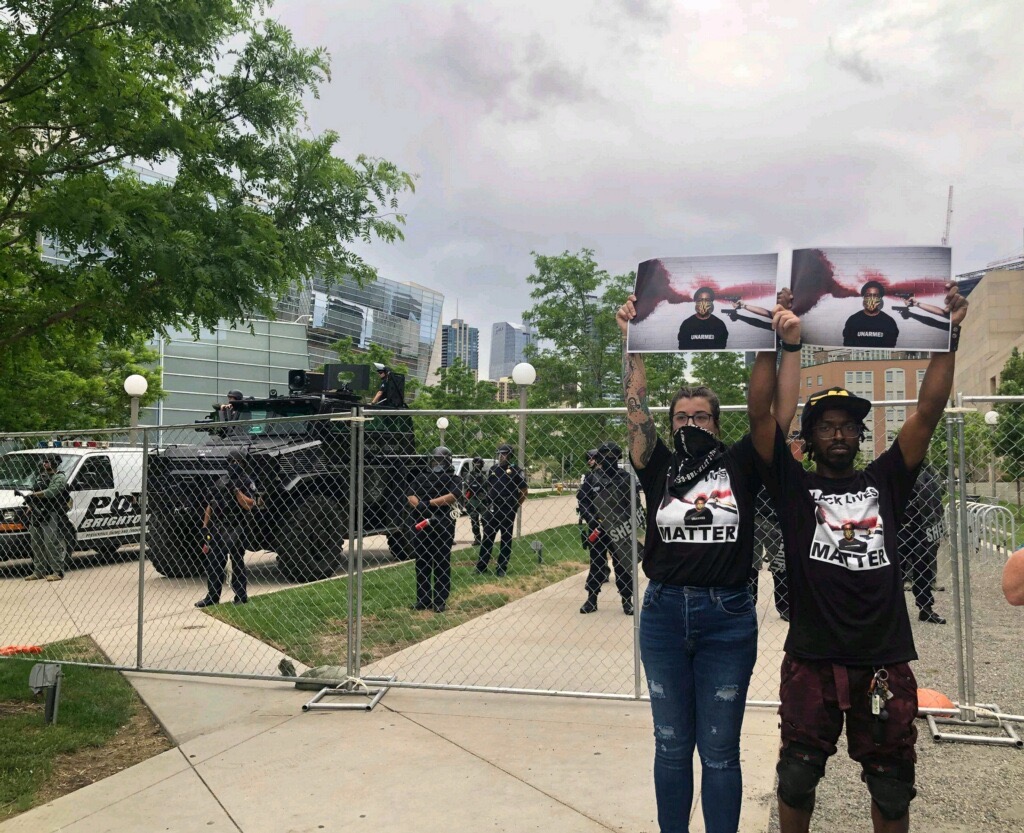 Matthews first fell in love with photography in high school, where he credits his passion to a memorable teacher who inspired him to pursue the art. Since then, he has continued to capture striking images and knows that photography is his life’s passion. His images are usually portraits — and they experiment with color, texture, shadows and light. Matthews describes them as a nice blur between commercial photography and fine art.

Additionally, Matthews has been a passionate activist for years. He has shown his support at immigration rallies and annual women’s marches. Perhaps what he is most passionate about however is racial activism. The man featured in the “UNARMED” image is Matthews’ brother. He shared how the hoodie his brother is wearing was a gift from his sister back in November of 2019. As soon as Matthews saw the sweatshirt — he knew he could create a powerful photograph.

Matthews actually took the photo four days before the killing of George Floyd. He shared how just by looking at the untouched image on his camera display — he knew he captured an important photo that he wanted to share with the public.

“The night George Floyd was killed, my brother sent me a link to an article about it and all he said was ‘It’s time,'” Matthews recalled. “I finished editing the pictures and put them out on Instagram the next morning.”

Since the killing of George Floyd has given the movement national attention — Matthews’ photograph has gone viral. The image has been shared extensively across social media and protesters have carried his photo while marching through Denver. 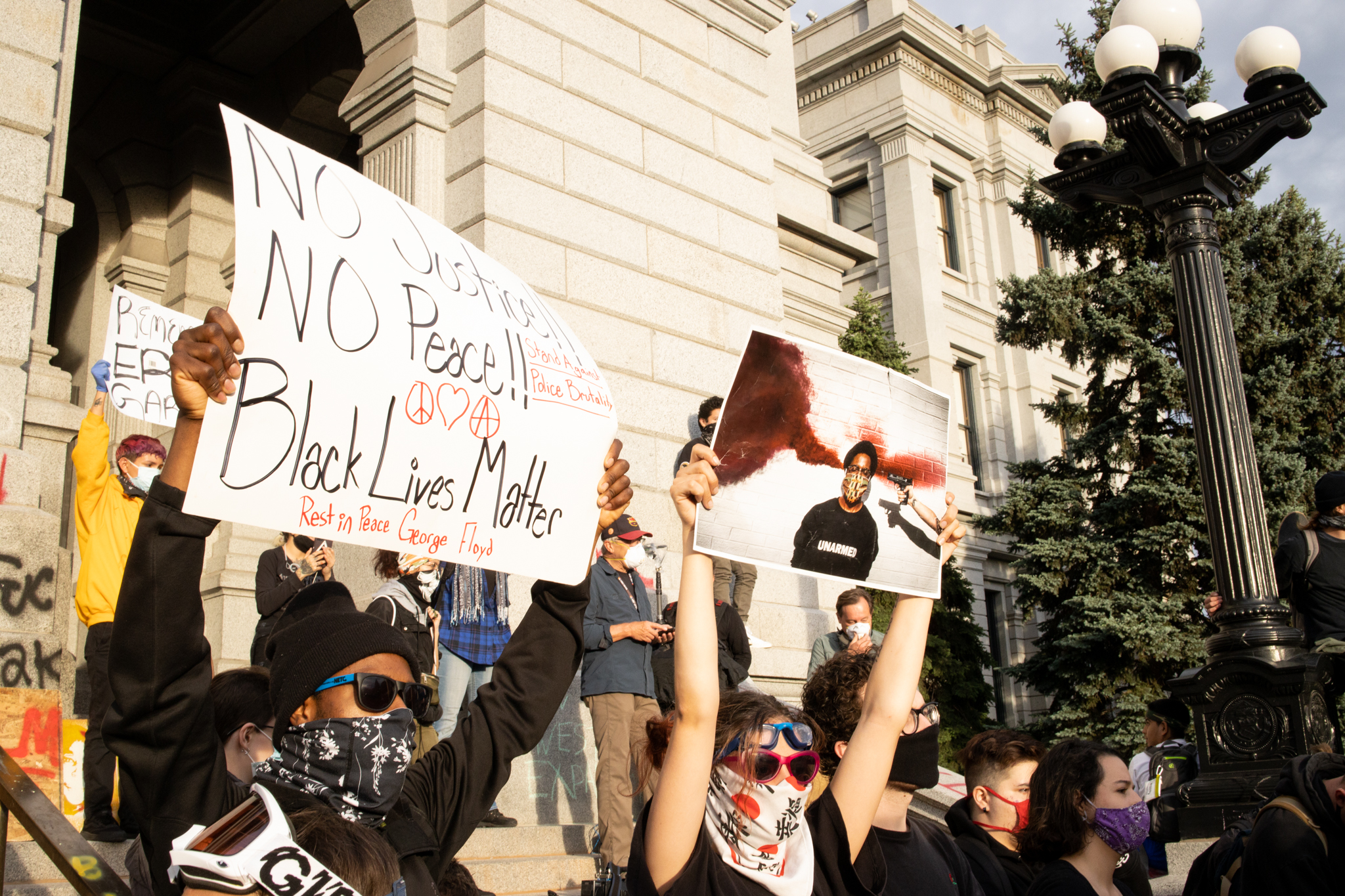 “I wish we weren’t living in times like these and I wish I didn’t have to create this,” Matthews said. “But that’s the unfortunate reality of the world we live in.”

Since the protests began, Matthews has been in attendance every single day. He prints out copies of the photo and hands them out to protesters free of charge.

“People need to see this picture,” Matthews said. “I want people to keep this photo and hang it on their wall, so they can be reminded of the injustices that we took so long to reconcile.”

Matthews has printed out 400 copies per day and has covered the costs himself. He shared that another reason he does this is to support other local businesses who have struggled through the COVID-19 closures. The prints are courtesy of a close friend of Matthews who owns a small sign printing business. Matthews is also selling t-shirts featuring the image, through another small local business — Smart Tees. Matthews is not profiting from the shirt sales or the digital download sales. All of the profits go directly towards the Colorado Freedom Fund.

As for what lies in Matthews’ future — he plans to continue attending protests and handing out his artwork. He also plans to personally meet with Mayor Michael Hancock to discuss police reform and racial inequality. His photo will also continue to be sold on t-shirts.

“Having this picture on shirts and signs is a way for people to have a voice,” Matthews said. “Art is there for when we don’t have a voice.”

You can find Brenden Matthews on Instagram. The digital file of “UNARMED” is available here. The t-shirts can be found here. To support the movement against racial injustice, you can find ways to help here.