Terry Maker is one creative that has been taking Colorado’s local art scene by storm. While some artists work with pencil and paint — Maker is especially drawn to hand saws and grinders. She takes everyday materials and with the help of her toolkit reassembles them into wall reliefs and sculptures. In her most recent exhibit (which you can view online here), Maker focuses on a recurring element in her artistry — the circle.

Born and raised in Abilene, Texas — Maker’s family has certainly been an influence in her artistic journey. Her father built a workshop next to their suburban home. Maker recalled memories of her father in that workshop — using various tools to hammer away at his projects. What Maker was enthralled by the most, however, was how inventive her father was. He would not hesitate to make tools of his own if he did not have the one he needed. This was perhaps the start of Maker’s fascination with tool kits — something that is reflected in her art today. 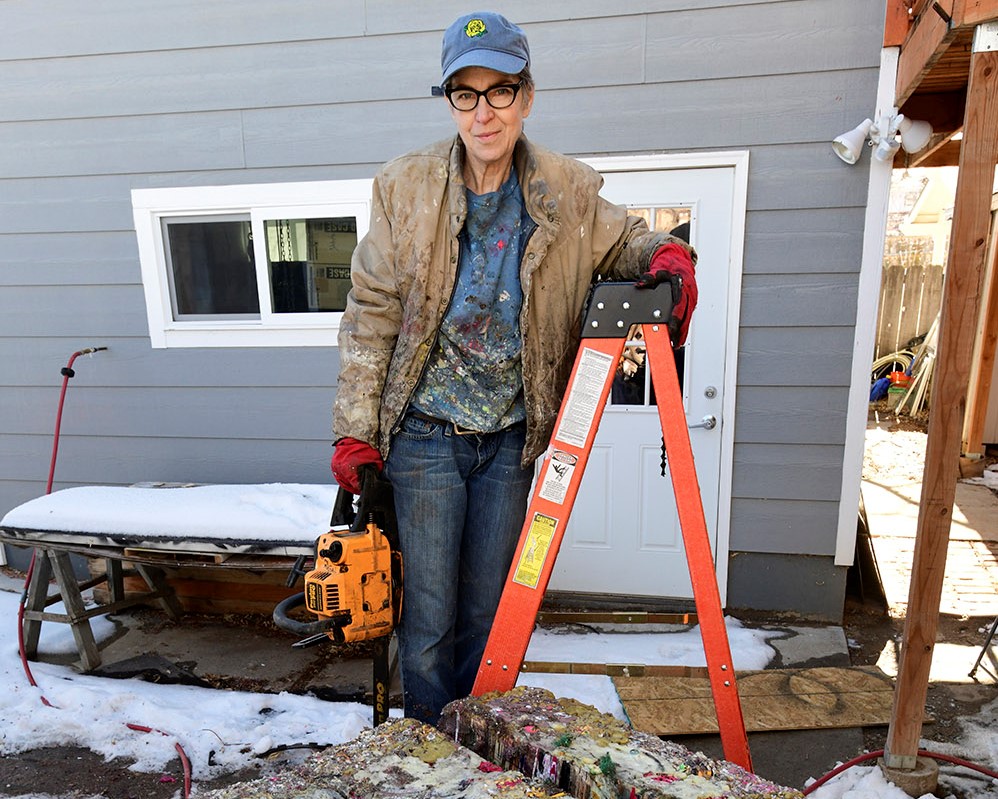 “I’ve always been drawn to using tools like the chainsaw, saws-all, grinder,” Maker said. “Using these alternative art making devices results in an unusual aesthetic and the resulting piece often retains the powerful energy inside — revealing its raw production.”

Maker’s latest exhibition is titled “Because the World is Round.” One specific piece from the exhibit that displays this powerful energy is titled “Cowgirl Hat Ball”. This sculpture — about 10 feet in diameter — is the largest and most prominent piece in the exhibition. Maker constructed it by creating a wooden spherical sculpture and then appending 500 straw hats to it. Yet what makes this piece especially fascinating is the feminist commentary behind it. Instead of naming the piece “Cowboy Hat Ball” — Maker chose a feminine naming convention. At first, the pieces may not register as hats as viewers are seeing their interior — and this is intentional. 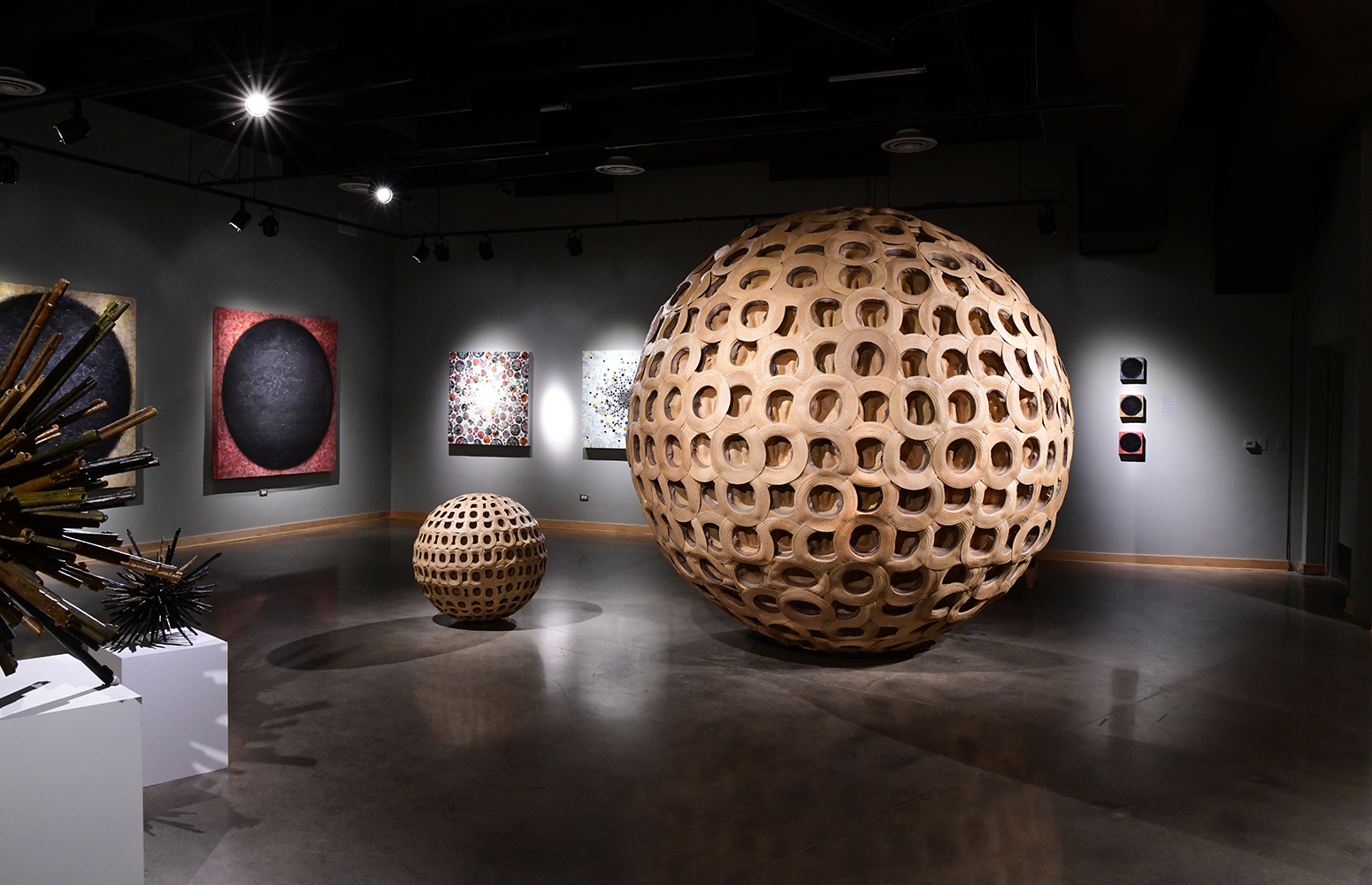 “This piece is a reversal of the traditional masculine hierarchy with the more feminine oval shape taking the more prominent position and the more masculine protruding crown of the hat taking the secondary, almost hidden position,” Maker said.

The social commentary behind Maker’s work does not stop there. Growing up in Texas, Maker was surrounded by gun culture. Another piece — titled “Trigger” — is Maker’s way of addressing the proliferation of guns. Maker created the piece by casting guns in liquid foam — creating molds. 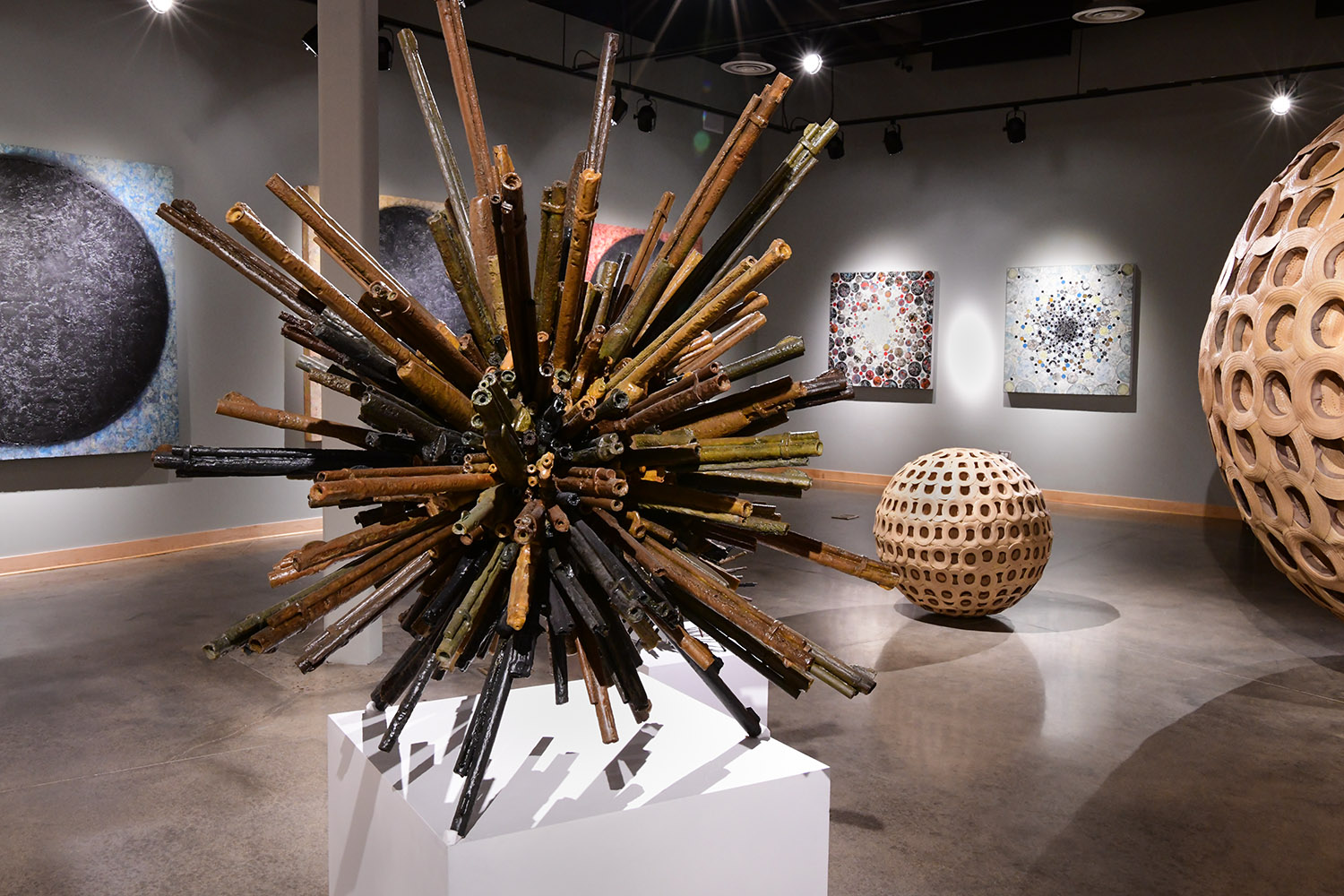 “The very material of being foam is making a commentary on true power,” Maker shared. “Even though this form is rather scary and looks like it could go off at any time, the dark humor is that it’s made of foam. True power is not about killing each other.”

Some of Maker’s works have smaller identical versions. Maker has done this as she wants to address the many cycles of life. The smaller pieces next to their larger ones represent the sensation of breathing — as our breaths expand and contract. She also is referencing the cycle of our human condition. While sometimes we may feel strong and powerful — at other times we feel small and weak.

What may be Maker’s favorite pieces from her latest exhibition are two works titled “Thirst (light)” and “Thirst (dark).” Maker constructed these works from hundreds of plastic straws and then cast them in resin. Through these works Maker tackles the human condition of being “thirsty” for all things spiritual and ecological. 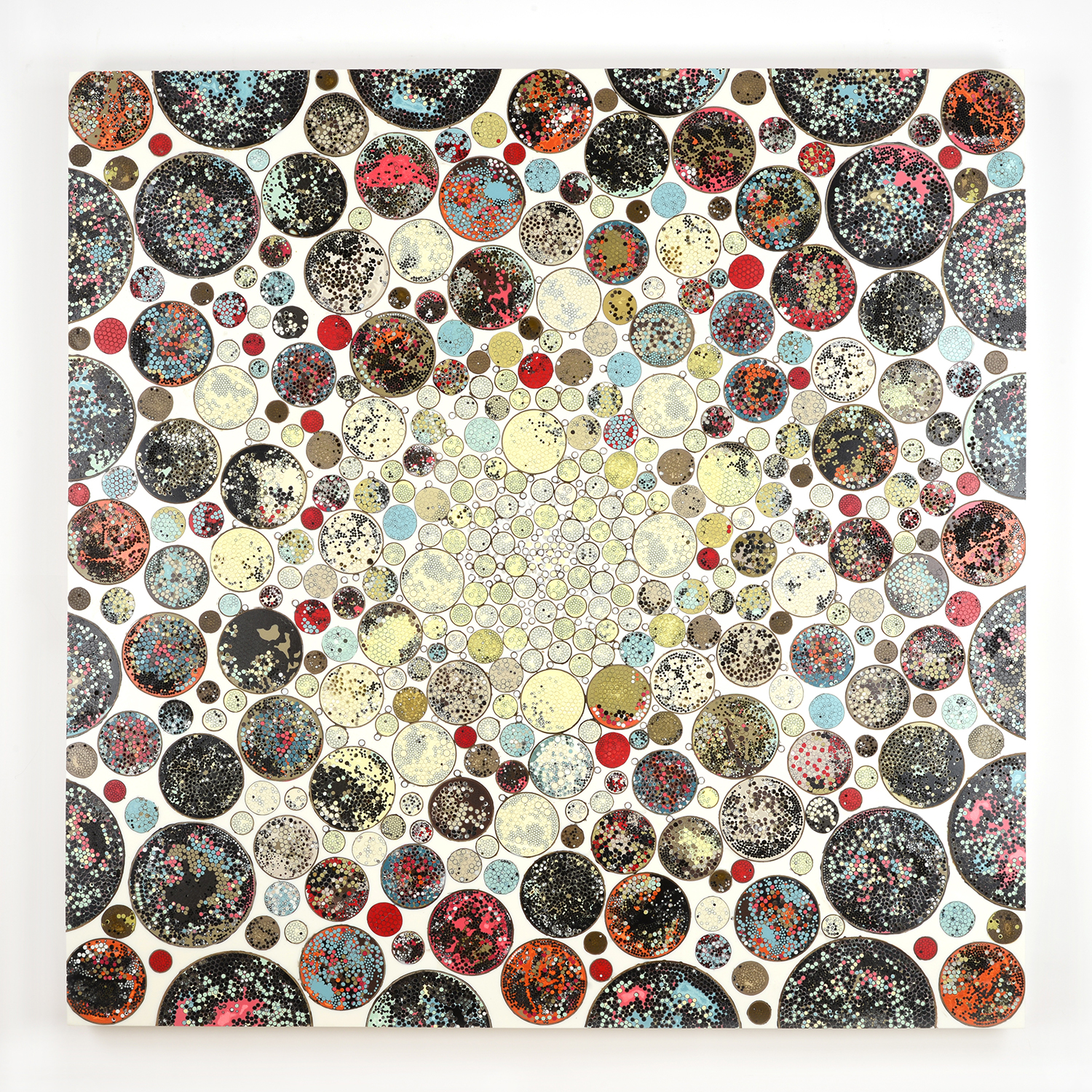 Maker originally studied counseling in college and believes that the study of psychology is closely intertwined with art.

“They both require a sense of going inside one’s heart and soul to access the spirit of creativity,” Maker said. “Making art is a very personal journey and requires the artist to draw from within.”

Today, Maker is quite the celebrated artist. Her work has shown at the Museum of Contemporary Art Denver, the Denver Botanic Gardens and the Cornell DeWitt Gallery in New York City — just to name a few. Yet she acknowledges that the path to where she is now has not always been easy.

“It requires falling in love with the art journey even if this journey goes unrewarded or the work remains unacknowledged,” Maker said. “You have to make art ultimately because you love it and not because you will get rich or famous.”

Anyone who views Maker’s works will be sure to gaze at them in wonder. Your eye will be drawn to the work as a whole — and then back down to the commonplace objects that make them up. Each of Maker’s works tell a story. Her art is capturing the attention of not only those in the local art scene — but of art lovers around the nation.

“Because the World is Round” is on display at Longmont Museum in Longmont, Colorado. Due to COVID-19, the museum has been temporarily closed. Maker’s exhibition has been extended with a new ending date of September 13. However, the Longmont Museum offers a virtual tour of Maker’s exhibition. Her works are also available for viewing online on Maker’s website — along with her artist statement. For more information on buying her art, contact Robischon Gallery 1740 Wazee St. Denver, CO 80202 at 303. 298.7788.

All photography by Chris Rogers