For the last week, it seems like every headline brings tidings of yet another cancellation. Music festivals and other tours are being canceled or postponed left and right. Major sporting events, such as the Rockies opening day and more hockey games that will further secure the Colorado Avalanche a spot in the playoffs, are being postponed for a minimum of two weeks. The coronavirus seems to have everyone spooked enough to start stockpiling toilet paper and hiding away in the comfort of their homes. Well, nearly everyone – but not even the coronavirus could stop Post Malone from bringing his “Runaway Tour” to the Pepsi Center on Thursday night. 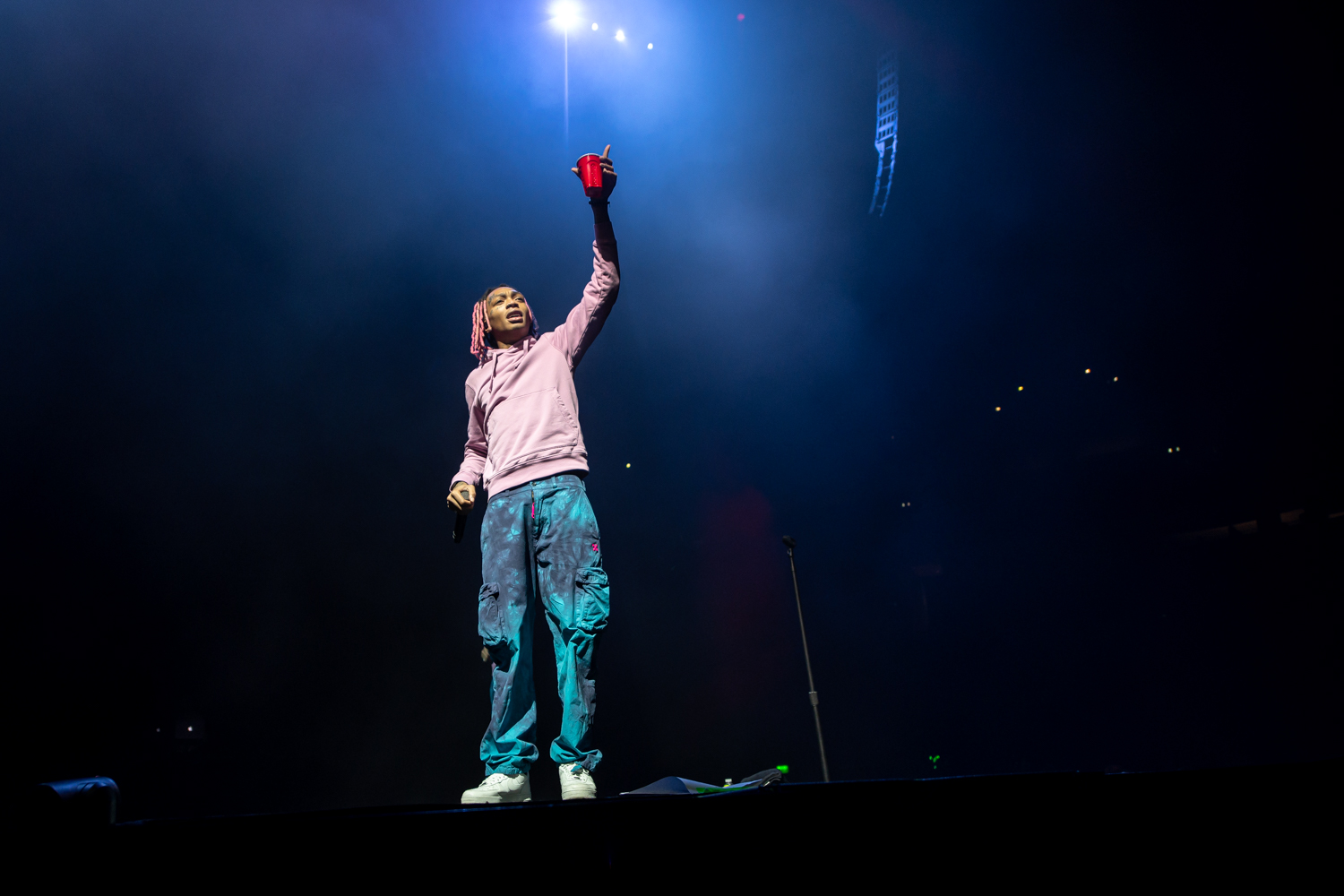 Following an announcement from AEG and Live Nation that they will be postponing major tours, there were plenty of doubts that the show would even take place. The Pepsi Center’s Instagram account confirmed that the show would, in fact, go on – in a post that immediately followed an announcement that the Blake Shelton concert the following night would not be occurring — followed by another post that Celine Dion’s tour is postponed as well.

As the world of live music and events came crashing down around him, Post Malone stood as the sole surviving artist to host large-scale events. As they say, the show must go on – even if the rest of the world is in a panic about the state of things. Post Malone’s Pepsi Center show still taking place despite the odds is newsworthy in itself, and that fact was not lost on the artists who performed. 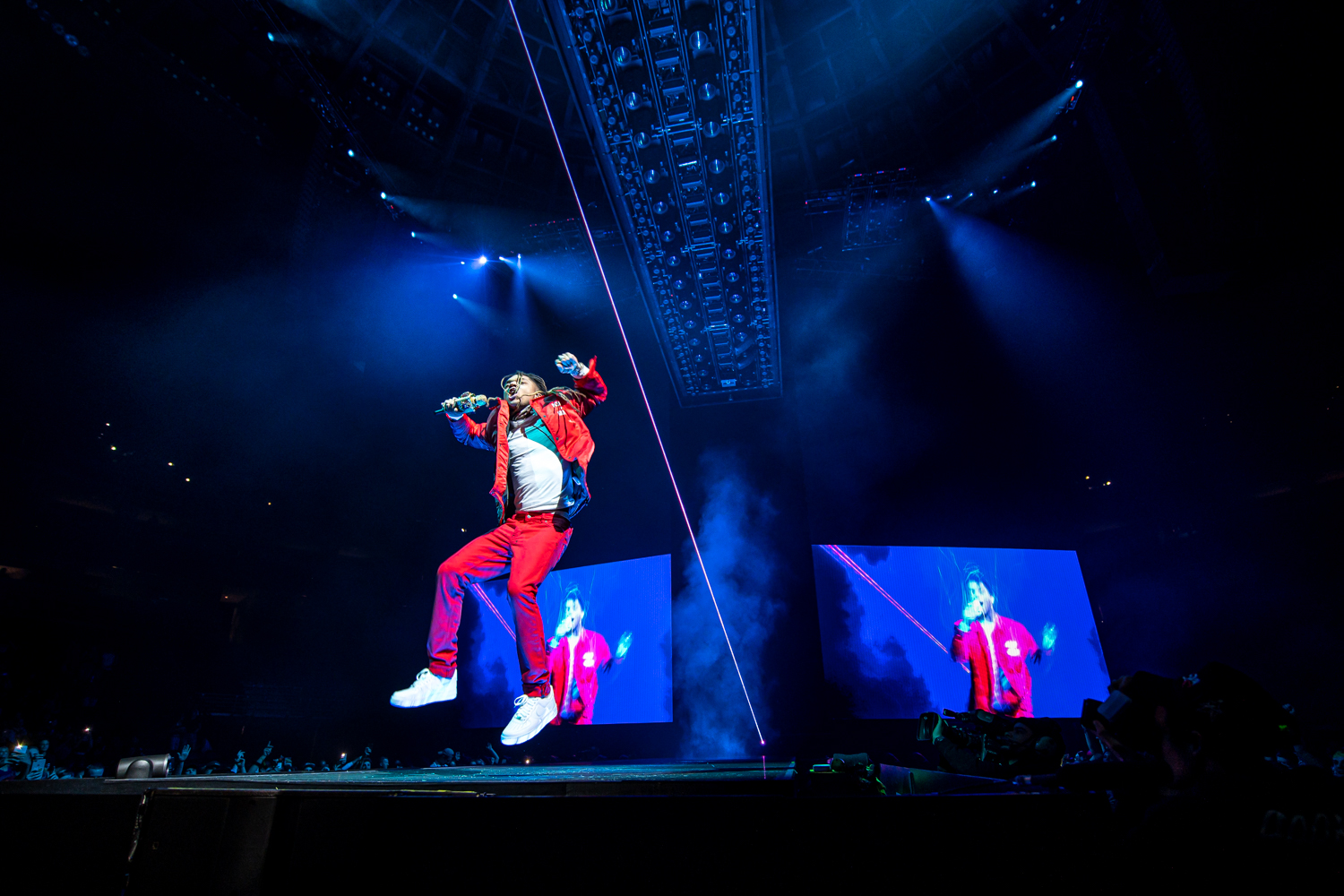 Tyla Yaweh opened the night with a high energy performance that kept him running the length of the stage, and leaping from one spot to another with enthusiasm. However, while his energy was undeniable, the gravity of the night was not lost on Yaweh, who took time out of his set to thank the fans. He graciously praised fans for braving the odds to attend the show. 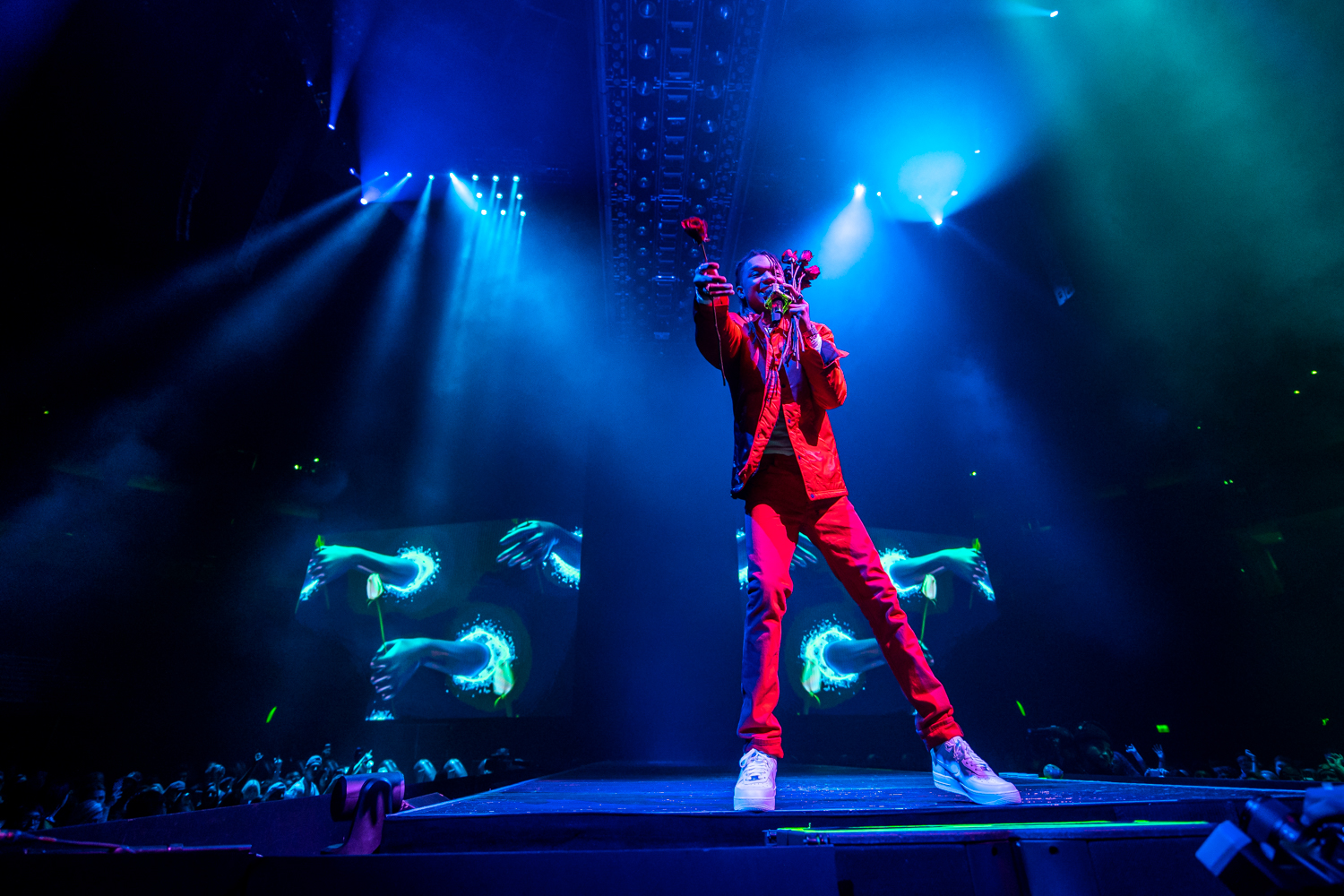 While Yaweh dedicated a brief amount of time to recognize the dangers of the coronavirus at an event like Thursday night’s performance, the second act made the gravity of the situation apparent. Between his uptempo songs, Swae Lee dropped the major news that Thursday night’s show would be the last show of the tour. While no official statement has been made to confirm this at the time of this article’s publication, Swae Lee’s multiple reminders that the tour was ending served as more than enough to animate the crowd – after all, Denver might not get another chance to party like this for quite some time.

Promising fans that this last night of tour would be the best one yet, Swae Lee whipped fans into a frenzy of dancing bodies. Fans bounced around in their seats and erupted into a cacophony of cheers as Swae Lee invited a few lucky fans on stage to dance with him. One of those concert-goers was a young girl who Lee announced was also a musician – encouraging the audience to support her once she starts releasing music. 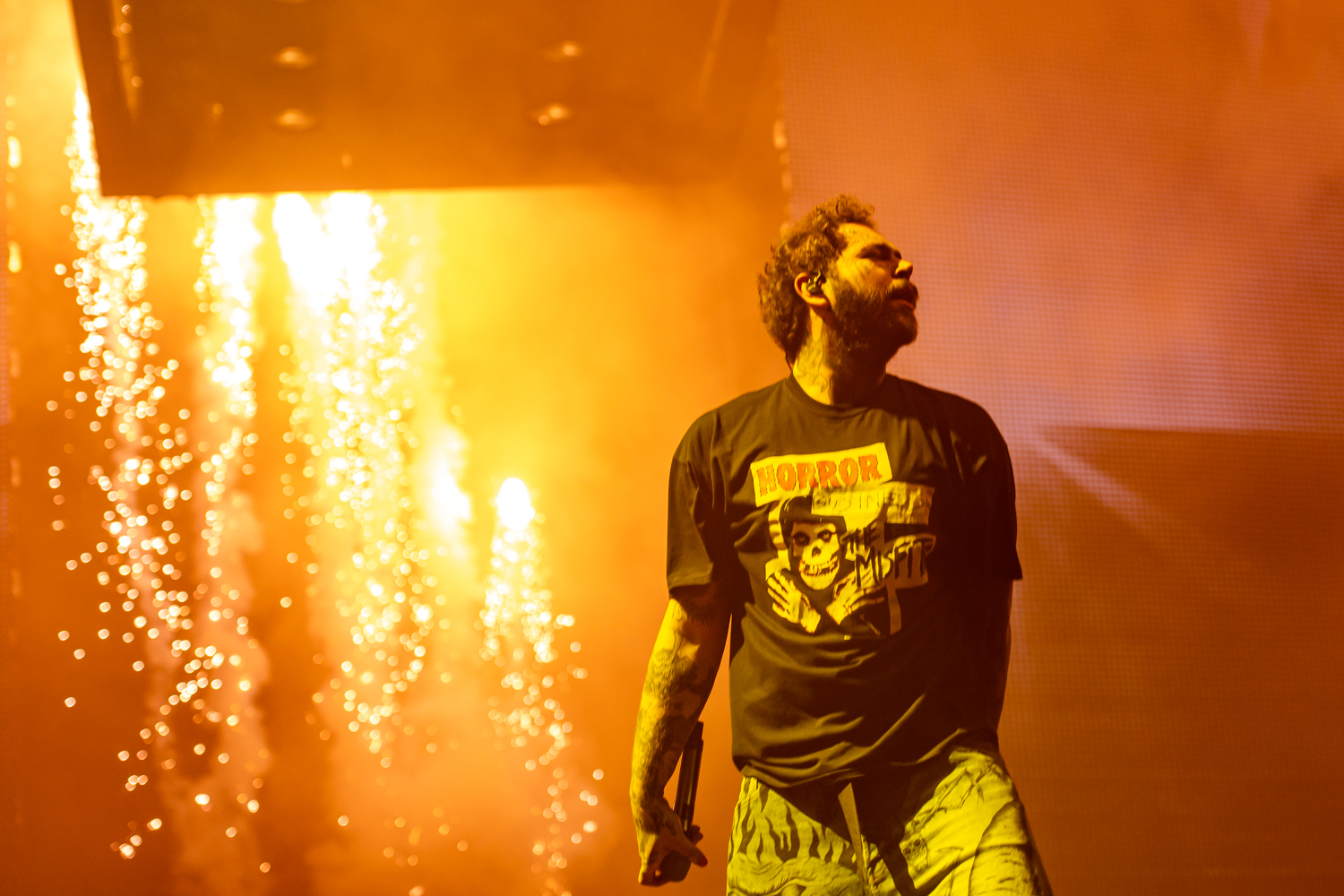 When Post Malone took the stage, backed by an explosion of fireworks and pyrotechnics, it was clear that if his performance was the last major concert that Denver could attend for a few months then it would be a damn good one.

Immediately launching into “Hollywood’s Bleeding,” Post Malone’s enthusiasm was more than enough to distract fans from their fears. In fact, the enigmatic rapper stood in stark contrast to the opening acts. Throughout the duration of the evening, Malone only mentioned the dangers of the coronavirus once – and he waited until the very end of the evening. 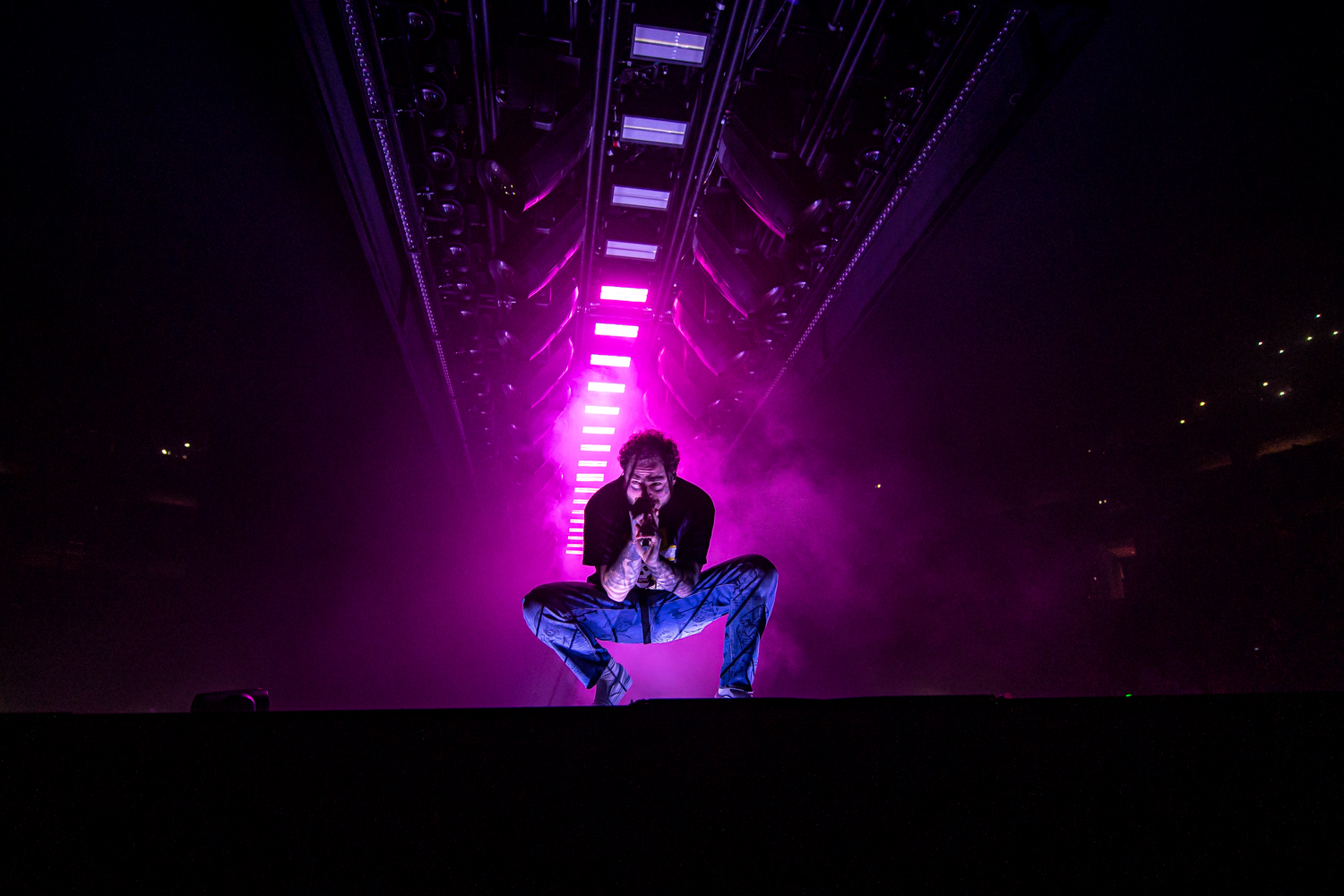 While the pandemic is certainly at the forefront of everyone’s mind as of late, Malone’s apparent indifference to it on stage provided the perfect respite from the constant bombardment of headlines filled with an endless tide of alarming news.

Malone rolled through all of his hits with a level of enthusiasm that was larger than life. Bounding across the stage as fans sang along to songs like “Circles” and “Goodbyes,” the rapper gave all the best parts of himself to the Pepsi Center. 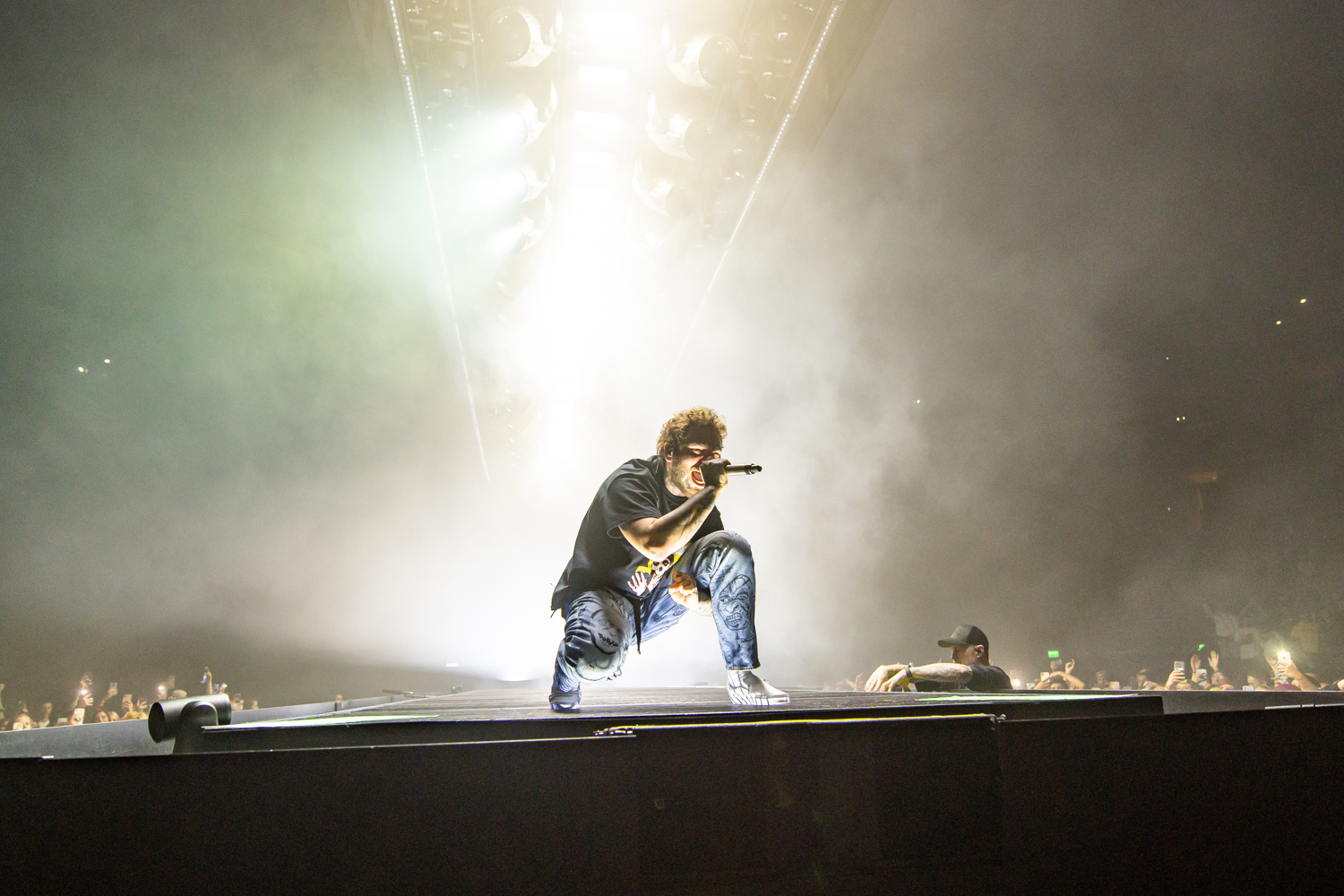 As the night wore on, Malone slowed things down to perform “Stay.” However, the slow down was brief and Malone’s buoyant presence quickly elevated the feeling of the arena back into party mode.

The night came to a close with a performance of “Congratulations,” before which, Malone took an opportunity to thank his fans and encourage them to believe in themselves. Retelling the story of how he surprised all of the naysayers with his music that has gone gold and platinum. 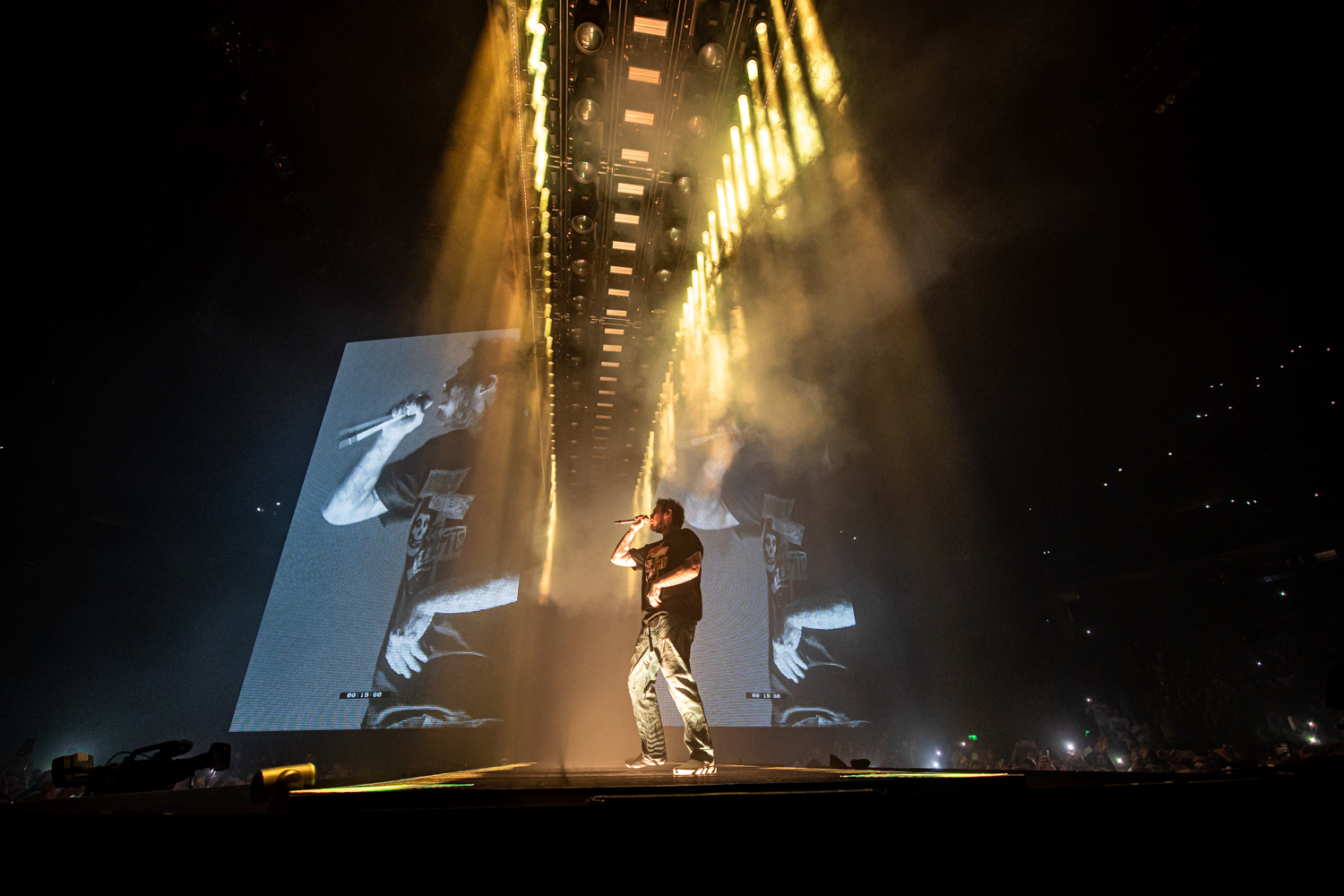 Finally, the mirage washed away when applause ceased and Malone thanked his fans one final time for attending. He ultimately acknowledged the dangers of the coronavirus, encouraging fans to use hand sanitizer and be safe – a testament that even amongst the panic, even our idols aren’t certain how to reassure us.

In the end, reassurance was not what fans at the Pepsi Center needed Thursday night. What fans and the rest of Denver needed was a respite from the chaos and the panic – and that’s precisely what Malone delivered.

While Post Malone’s Denver performance survived, many other shows have been postponed or canceled as a response to concerns over Coronavirus. See the full list of what’s been rescheduled or canceled here.