This Leap Day is about to get real hot over at Your Mom’s House, with the album release party for Dog City Disco to lead you dancing into March. The self-described “karate-funk” six-man band will take over Your Mom’s House this Saturday night to introduce Denver fans to their latest masterpiece, Black, Mild & Magic. Dropping on Tuesday, Black, Mild & Magic is their second album, one that sees Dog City Disco exploring all sorts of new genres, styles and sounds. Speaking about the album, keyboardist and saxophonist James Lowrey said, “it’s a total collaborative effort — one person comes up with the theme of the song, and everybody writes their parts around it.” Black, Mild & Magic has some fun songs, some darker tracks, and showcases the band’s growth and diversity.

“None of us actually knew instruments before we were 18 or 19 years old. We were playing this game together and we were like ‘we should actually just start a real band.'”

Fast forward ten years and those six teenaged gamers have become Dog City Disco — throwing parties across Denver, from Cervantes to Larimer Lounge, to Your Mom’s House, and back again. 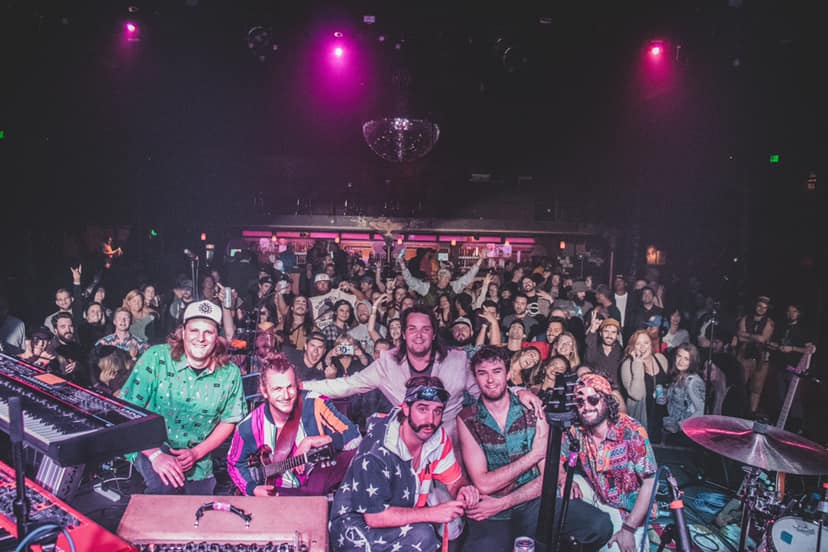 Dog City Disco has also been on both the national and local festival circuit, having performed last year at Illinois’ premier jam band festival Summer Camp and Spread the Word Music Festival at Denver’s Levitt Pavilion. This summer, they’re already slated to play Beanstalk Music & Mountain Festival alongside local jam icons the Magic Beans, Cycles and Envy Alo. Where they may lack in technical training, they more than make up for it in energy and creativity. But that doesn’t stop them, as Lowrey emphasizes their niche as musicians and performers.

“We’re focused more on the entertainment of the show and how a set can be intertwined with having fun the whole time. That’s what the strength of our band is, and that’s what people can expect from our shows.”

Lowrey describes the band’s music as an in-your-face type of funk, which no doubt will get fans moving and grooving on Saturday night — typical for a Dog City Disco show. The outfit was actually one of the first bands to play Your Mom’s House when it opened a few years ago, and they’ll return to that stage on Saturday with fresh new music that’s sure to be quite the rager. The evening at Your Mom’s House will open with two support bands, O’Connor Brothers Band and RADO Shreds, with a full takeover by Dog City Disco to follow. Bringing their beats that combine “elements of rock, funk, reggae and jazz” to fans will surely be dancing all night long.